I finished up two more tiny tables and hope to finish three or four more tonight.  The plan is for 24 in total, then I'll start on vendor tables.   After that I'll find out what ASL is and what the ASL players do in their secret Enfilade wing.  Then the zombies attack.

The one on the left is a set of DBA boards for the DBA tournament at every convention.  They are actually way too big, but making them to scale would have been very difficult.  I've included one of those weird banded magic wands that DBA players carry around.  I think the multicolored wand is to scare away new players, but I'm just a muggle and can't be sure. 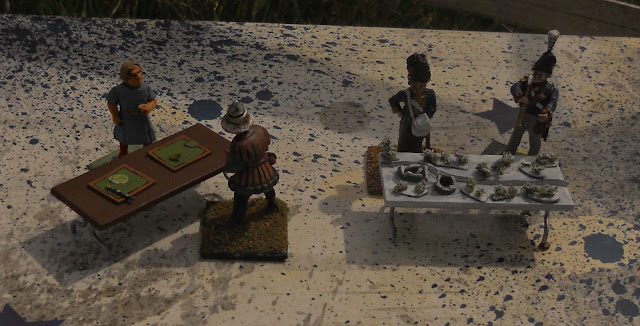 The table on the right is a poor rendition of Bruce Meyer's very neat "Aim True Lads, that's a Truck Full of Vodka" table.   Had to stick some cardboard under two legs as the table was too wobbly, because I was drinking vodka when making it.  Well coffee with vodka, not a particularly good choice.