I've painted a five more old Citadel Clerics.    It's amazing how much easier larger 28m fantasy models are to paint than Napoleonics.   The one below is reading the adventures of Saint Attila.


Speaking of Nappies, here are six French Voltiguers.  I bought them used and painted over previous work.  I love used minis, no priming.  I think they are Front Rank Figurines, but I'm not sure as every Front Rank Colpack wearing model I've seen have longer plumes and not tiny little pom poms.

They are based on little home-made magnet movement trays, so they can be removed for skirmish games.  Two of them are missing their muskets.  I'll have to find some.  Their open hands make me want to glue incorrect objects in them.  Perhaps I'll make them pull rickshaws or a chariot. Here's another little table for a future zombie game, for when zombies attack a miniature wargame convention.  It's the first table not copied from an Enfilade 2012 game; I saw it on the Camino Real Wargamers Yahoo site; and it looked easy to recreate, but as you can see it turned out more like boring poop.

Here's another non-Enfilade table, just an imaginary section of castle wall with woods encroaching dangerously so.  There's no legs, because table leg production is dull work and my quality control on table leg length is terrible.  I will mass produce table legs, when I have enough table tops to make it worth my effort.  Next Enfilades table I plan on plagiarizing are Chris Craft's Vietnam game and Lloyd Bowler's Viking Run. 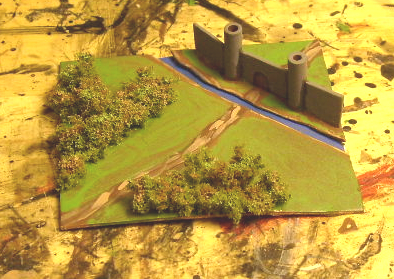 I'm almost finished with a box of Perry Plastic Prussians painted as Lutzow's Freikorps.  They only need some highlighting, touch-ups, basing, and a clear coat. 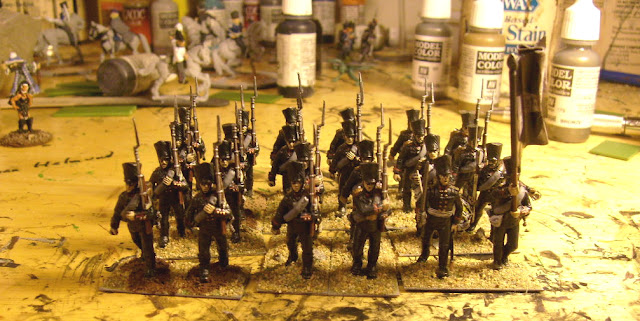