I've finished a unit of Warlord Games Dacian falxmen.  Warlord Dacians are their Celts with a bag of metal parts thrown in allowing you to convert the models to Dacians.

The metal pouch contains a metal leader, musician, falxmen torsos, Dacian heads, and various weapons.
There only three falx torsos, but there loose falx allowing you to add falx to plastic open handed models; I chose not to do that.


Here's three Iron Claw Space Pirates, from 1998.  Iron Claw was a sister company eventually absorbed by Citadel.  Bob Olley sculpted these models, but probably doesn't like people to know that; they're barely in scale with each other.  I tried to paint them as they were pictured in GW's Book of the Astronomican.

Here's my first sculpt (awful) of a crawling zombie made out of green stuff, I did sculpt a face but my photographer is an idiot, completely lacking any photography skills.  Second is some sort of horned-cyborg dog thing I found in a bits bin.  Third is an old RT Imperial Army model that had thick enamel paint on it; I painted over the previous paint job, but he still looks like poop. 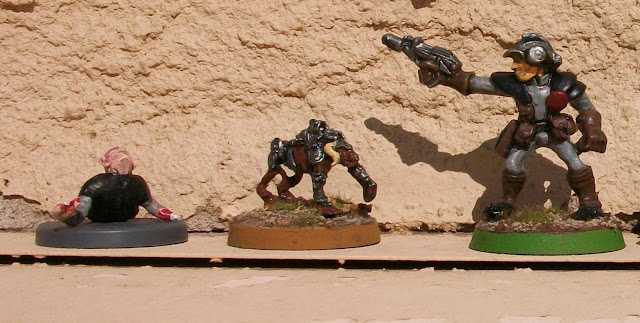 Lastly are some random GW models.  Left to right are two Empire crewmen, what I think is a D&D  female cleric, and a Talisman game thief.  I was too lazy to paint eyes on anybody this month, which I regret.  Eyes would make up for  some of their lackluster appearance.

Until next time when I hope to have a unit of Prussian Lutzow Korps Jaegers and really old Mithril Miniature models done.

Love,
Baconfat
Posted by Baconfat at 11:01 AM