Hi,
Just a quick post as I've not been painting the last two days. I've been reading and did a quick play test of the Black Powder rules. The book is amazing, it's full of clearly explained rules, witty humor, and pictures of impossibly well painted miniatures. They seem like they'll be fun and easy to learn.
To better understand some of the game mechanics, one of my dogs and I lined up a few army men and rolled for initiative. There was no terrain and they were lined up way to close (16ish inches apart). Not worth posting, except that one side was completely destroyed and the other left completely unmolested.
Here was my opposing general. 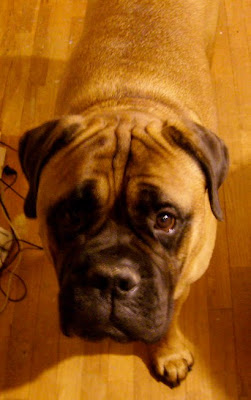 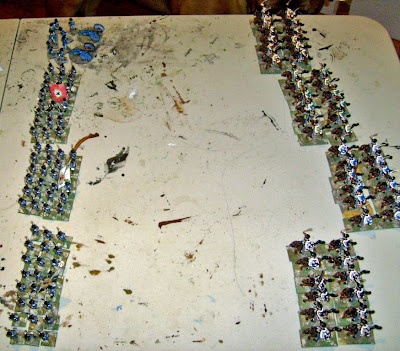 When initiative was rolled the infantry grasped the...initiative. It turned instantly bad for the Hussars of Army Two. Each of the infantry units shot at the Hussar units directly in front of them. The Hussars all took quite a few casualties and became disordered or shaken. The unit that took four casualties from the cannons immediately broke, fled, and was removed from play.
The Hussars turn one: being disordered and shaken the remaining three units were forced to just stand their ground.
Infantry turn two: Once more shot the living "S" out of the Hussars, who turned tail and ran away.
It was a particularly stupid game and I won't try anymore play testing until I take the time to set up terrain on a large table. I would suggest setting the game up as instructed and not in a space small enough for a DBA checkers game. I also won't face battle against such a clever dog until I better understand the rules. I'm also going to read a Brigadier Gerard novel tonight for pointers on the proper use of Hussars.
Love Baconfat
Posted by Baconfat at 8:04 PM