Hi again,
I wanted to show off this aquarium building I found at the local used store. It was deal as instant terrain and only $3. I bought it to be environmentally friendly. I always say "reuse, recycle, and re....something." 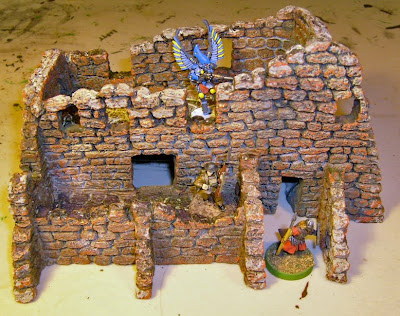 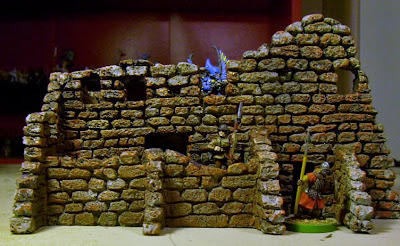 I also found this little thing that might be a cave.

Next up is a hill with an incredibly big skull or rock shaped like a skull. A few older blogs back one could see the work in progress. The pieces were insulation foam and a paperboard skull from a craft store. 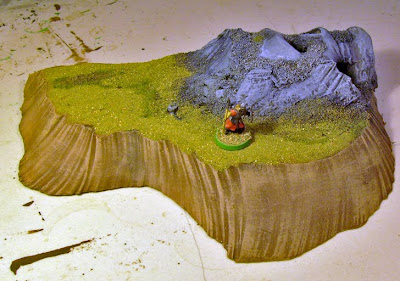 Here are some of the trees I recently based. I can't remember what brand trees they are but they were incredibly easy to base. Each day I completed one 5-20 minute step.
1. super glue the tree bases to a 25mm washer
2. squirt pva glue all over the washer, then dip them in a fine sand
3. paint the hardened glue sand mixture dark brown
4. highlight the dark brown a lighter brown. Advanced hobbyists would repeat this process numerous times with continually lighter browns, but I am far too lazy for that.
5. spot glue grass and assorted ground cover or rocks

Here are some unfinished Prussian artillery crew, I read somewhere they had eight men per gun. That's nice of them. To the right are some British rocket crew. They're even more unfinished, but I'm having so much fun painting them I wanted to take their picture. All the models are Old Glory metals. The cannon is one of those Victrix plastic pieces. I haven't painted the Old Glory metal gun yet.

The last new item is some sort of landing pad for science fiction models. The vertically challenged space man and WWI tank are for scale viewing pleasure. It's made out of a piece of neato styrofoam and four wedding cake columns. Not from my wedding cake. I hand painted it with cheap craft paint, then spray painted it gray, then spread black wood stain all over it, and about 30 seconds of highlighting. I'll probably stick a few led lights on it, some Archer rub on decals, and maybe a way for the little soldier to get up and down. 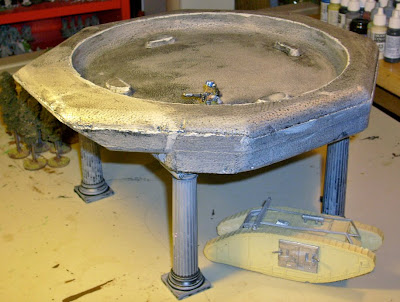 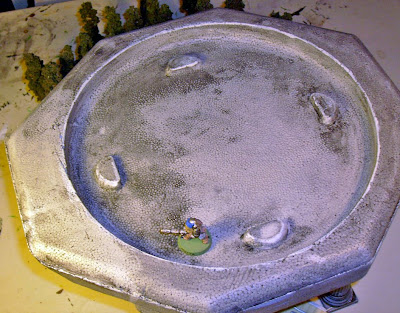 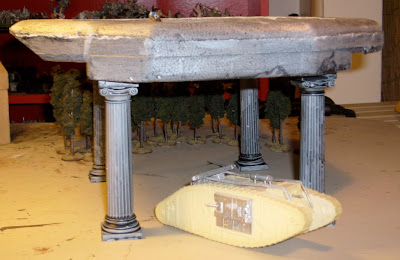 Here is a picture of my painting area, I took as evidence. It appears someone drank a bunch of beer, poorly painted a bunch of miniatures, and left the table trashed. 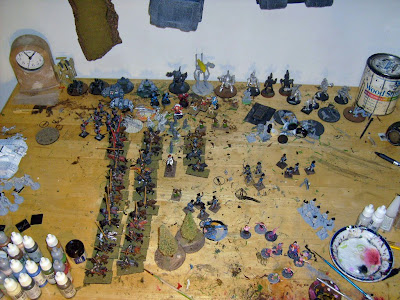 Thanks for looking or reading. I've had nearly 100 views, most likely by disgruntled internet enthusiasts looking up the Canadian rock band which stole my Baconfat name.
Love,
Baconfat
Posted by Baconfat at 6:55 PM