Giant Stompy Robot, WW1 French, and Pike and Shot and Zombie Action; Clearing the Village of the Dead!

I only have a couple minis finished for today; next time I promise at least 20ish.

First up is a toy painted up for the battlefield as a big stompy robot, or mech, or little titan.  I think it's a Robotech toy.  You'll quickly notice the boring base, littered with junk to hide how boring it is.  I need to watch the Youtube videos where they base big models on corkboard and it looks all rocky and exciting. 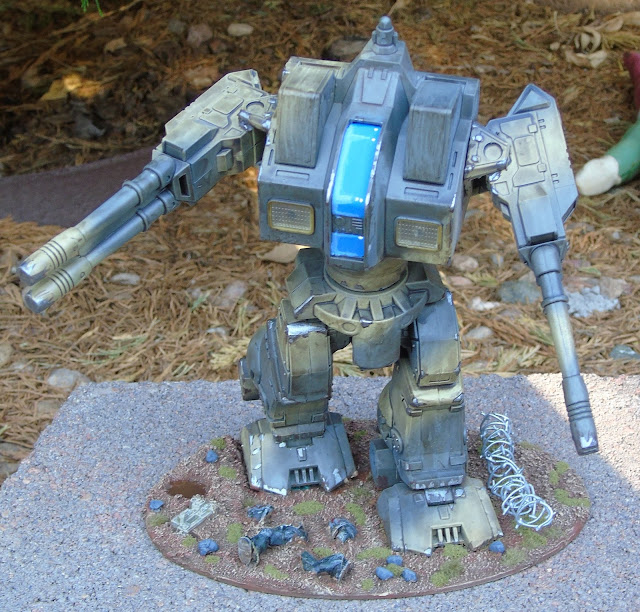 Here he is after killing one of my garden gnomes.   Next you'll notice that I forgot to age that barb wire, it's currently hideous.  Then how I forgot to cover up the screws in his back. 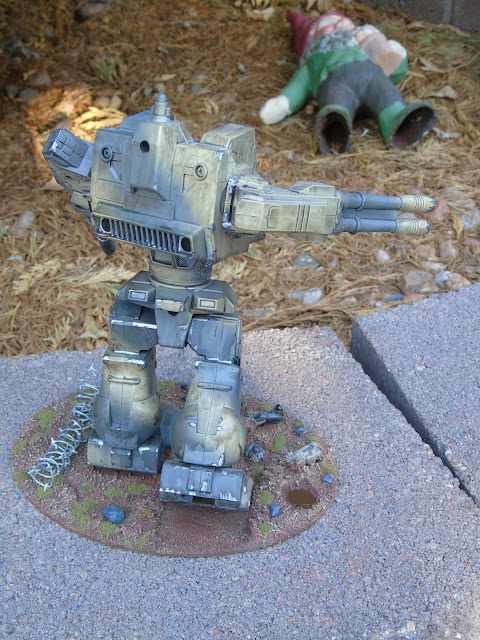 Here he is with a littler version, painted a few months ago. 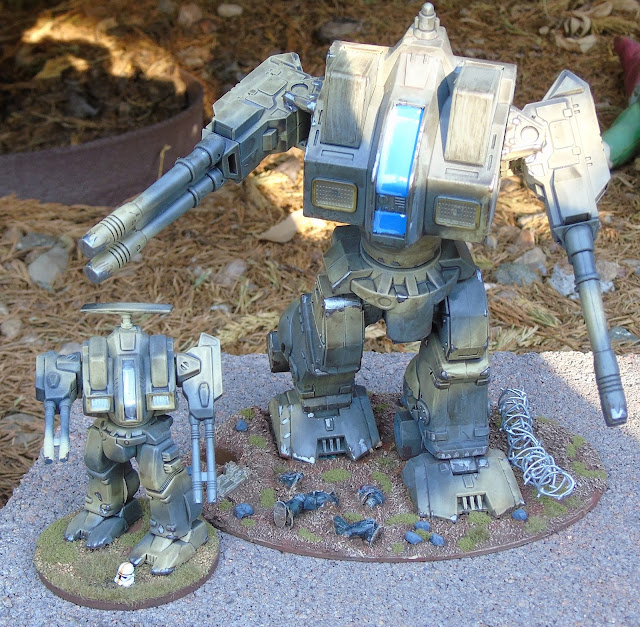 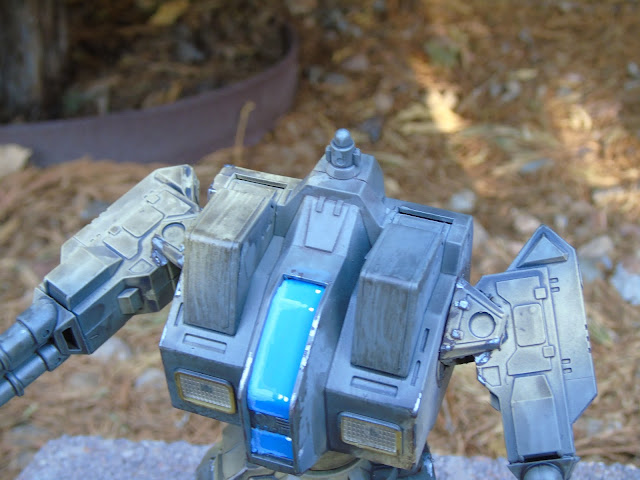 Here are his feet with a couple space marines for a size comparison.


Here's four early war WWI Frenchmen.  The models are the from Battle Honors.

Reverse:  I know the backpacks are the wrong color.

Here's an accompanying machine gun, which is also the wrong color. 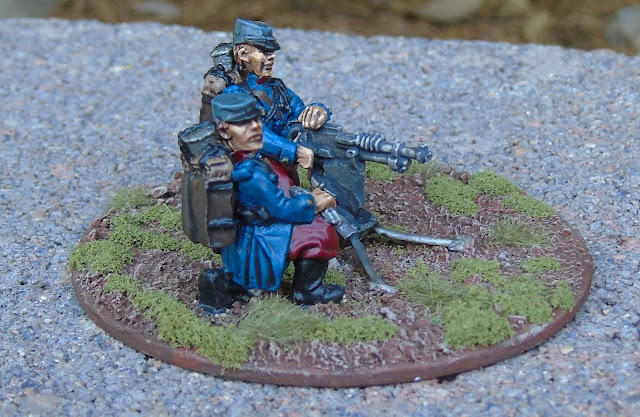 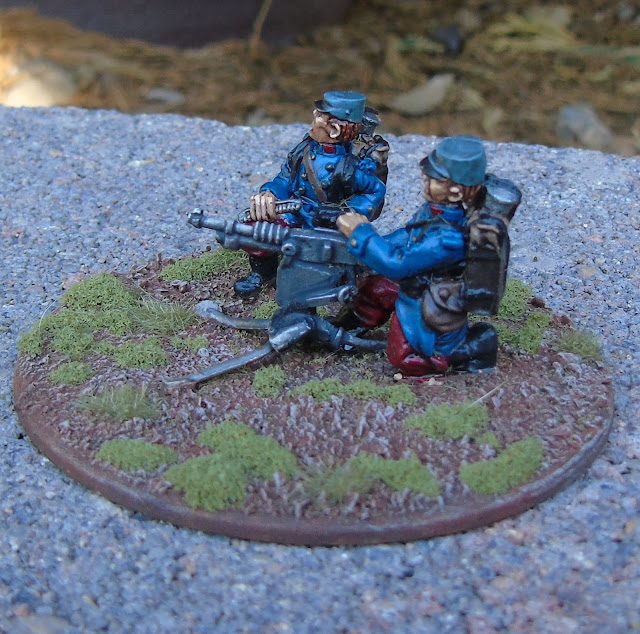 Now on to the Zombie action!


Our company of five mercenaries has been hired to clear the small village, surrounding the bridge of the walking dead.  Right this looks easy. 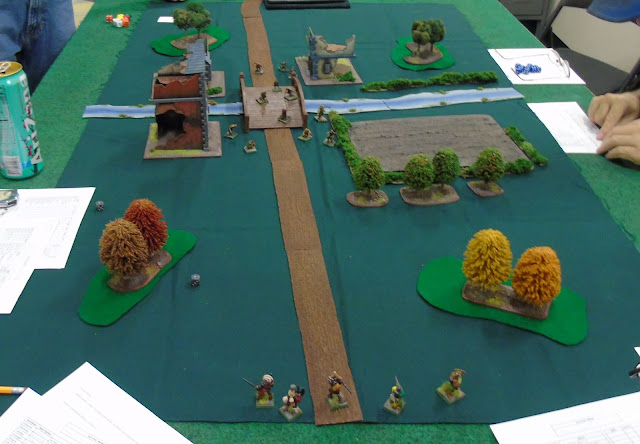 Here is a terribly taken blurry picture of the team. 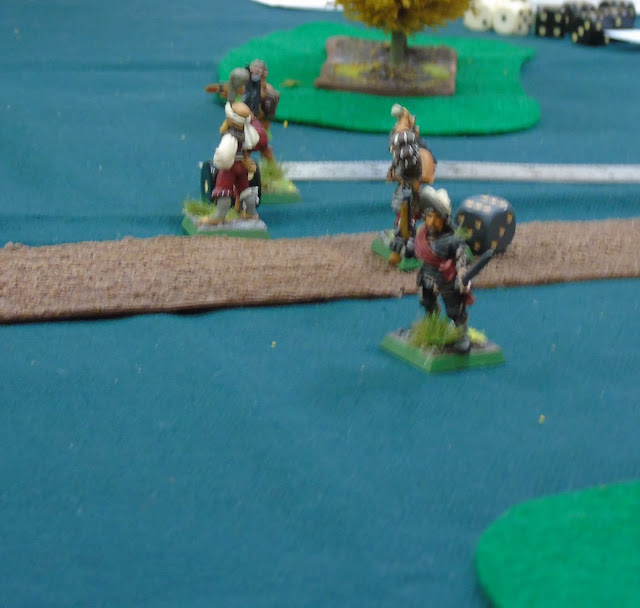 We advance confidently and start the enjoyable smashing of the dead.  Mario the Unlucky wanders off by himself.

Aha, there's a spawn point for the bastards.  We'll smash that up and then we should be done. 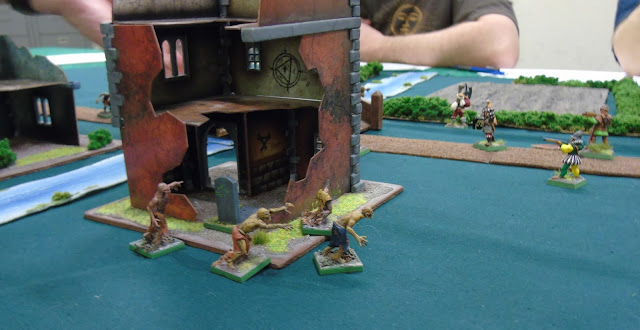 Fritz and Captain Hauser decide to handle the dirty work of closing the portal.  Mario the Unlucky rejoins the group. 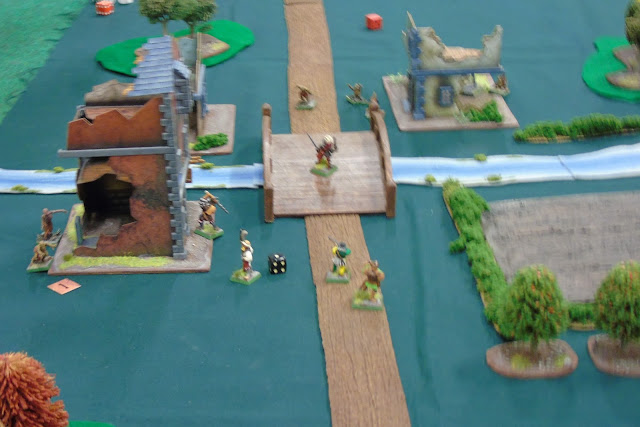 Double Dangest these zombies,  a third portal opens up north of the second one, when Mario shoots his damned fire stick. 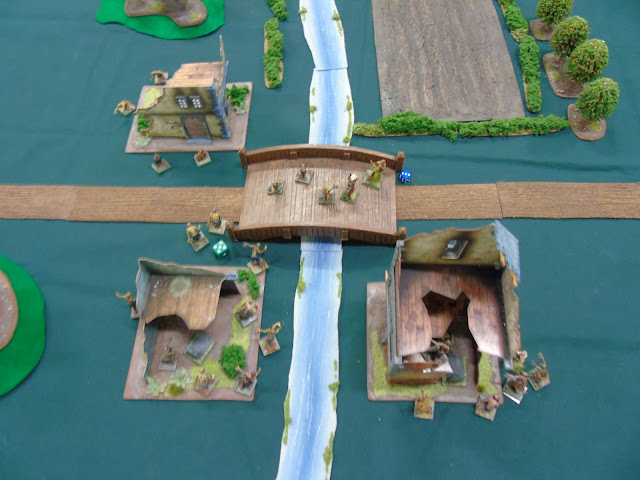 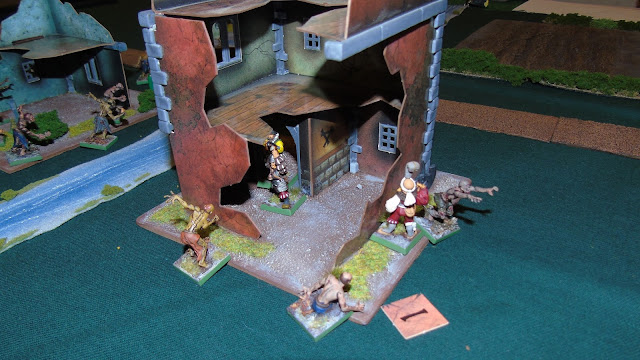 Mario the unlucky has wandered off again, while the rest of us gather to cross the bridge. 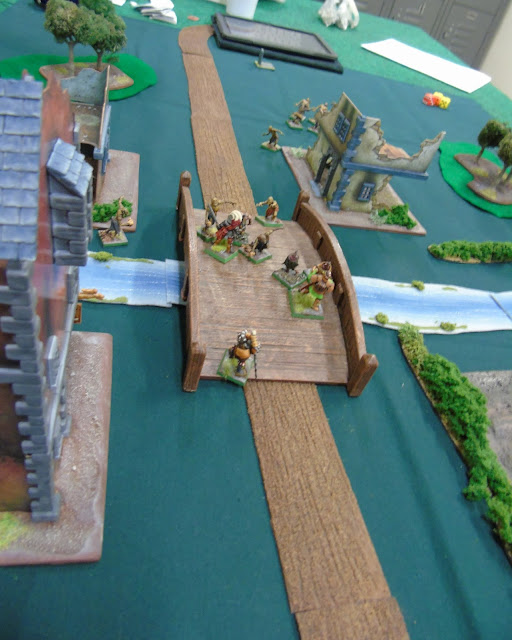 Captain Hauser appears to be taking forever, but he's got a grenade to toss. 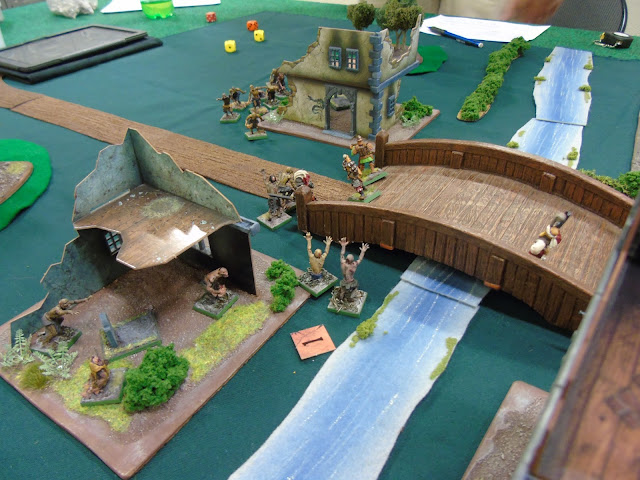 The third portal is belching out unbelievable numbers of walkers.

There are too many of them.... 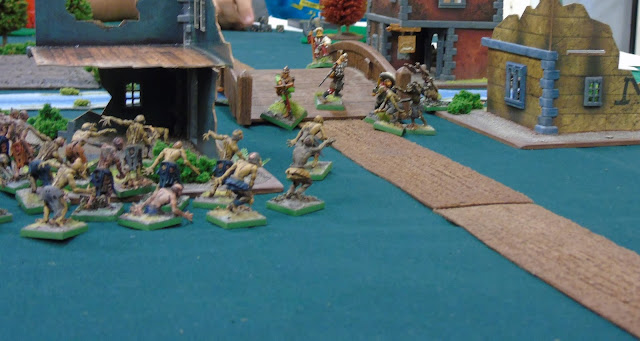 From both sides...walking right  past ineffectual grenades..... 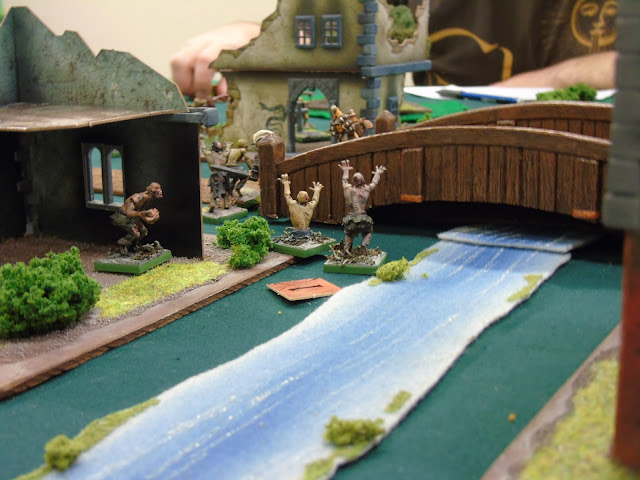 Oh terrific, a fourth pit of evil awakens on the side of our escape route.  And look there's Mario on the bridge shooting his stupid noisy loud handgun of missing. 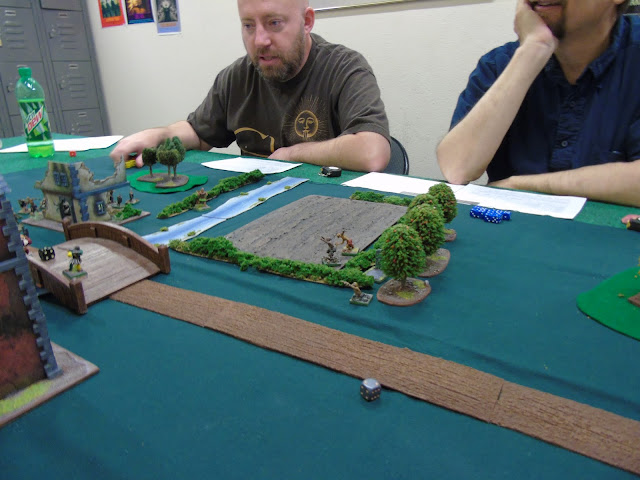 Carl the Beer Slayer's human player has tried a quite clever trick of adding terrain to the table when the evil game judge Mike isn't looking.  Brilliant! 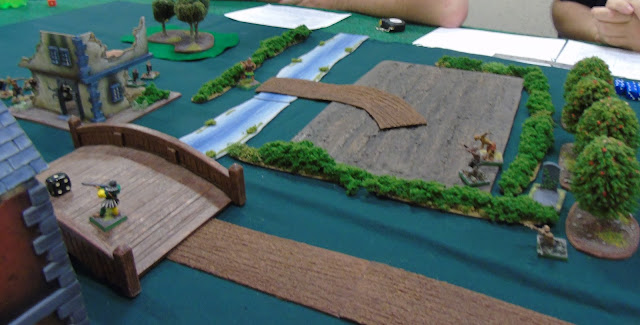 Once again I shart myself, as another spawning point shows up on the bridge. 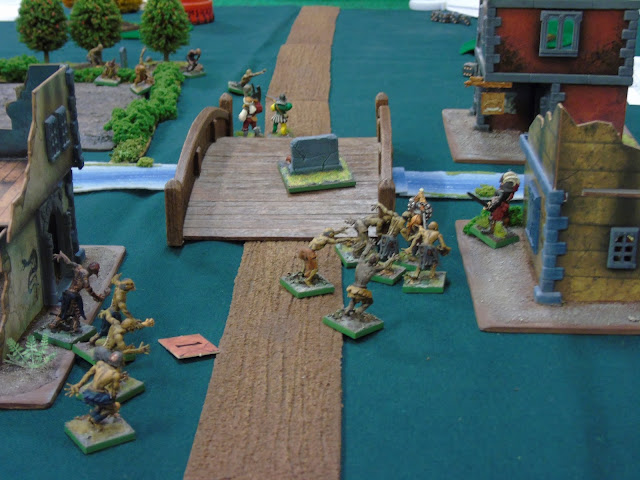 Brave heroic stalwart honest Fritz attacks the bridge monsters.  Mario and Cap'n Hauser must be inspired by his incredible bravery. 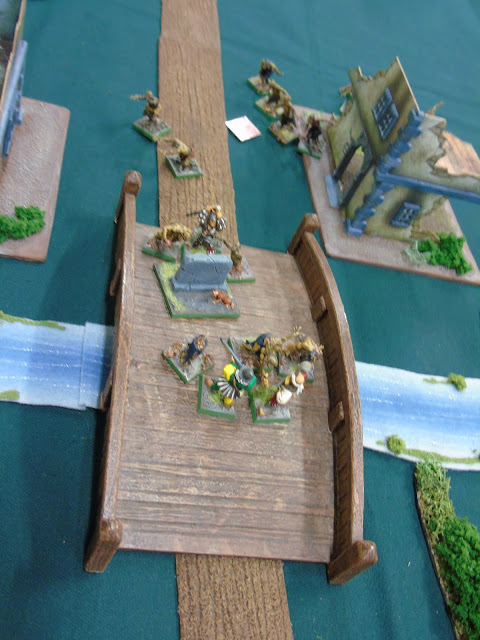 Carl the Beer Slayer is pulling one of Mario's plays and running off on his own.  It actually helps out quite alot and takes some of the heat off the team.  He's picking them off at a steady rate with his handy crossbow.  Carl will take out their portal after he's dispatched this small pack. 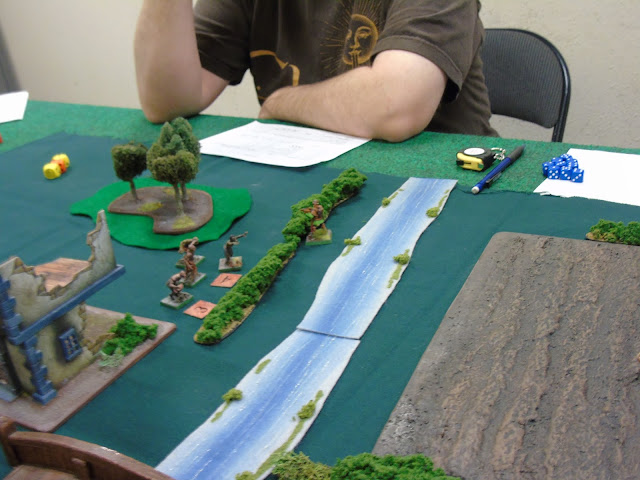 Hurray Fritz has closed the portal.  He's the best. 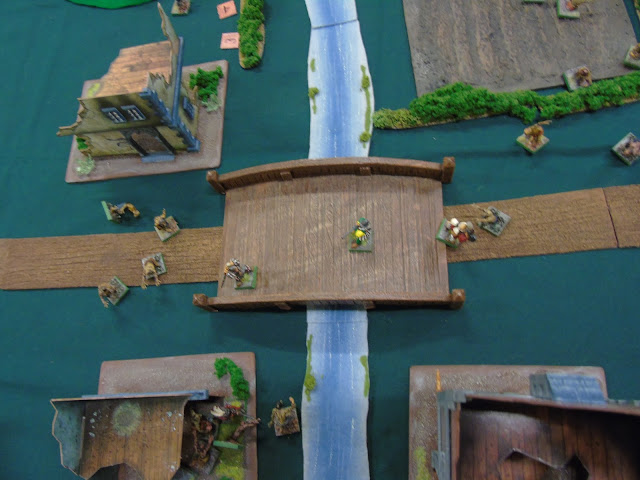 Christopher took out another portal. 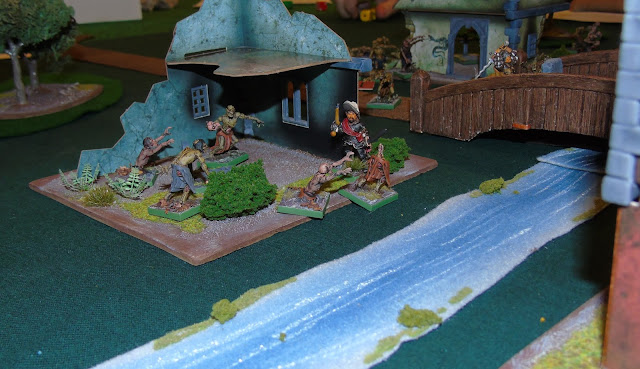 Only one portal left. 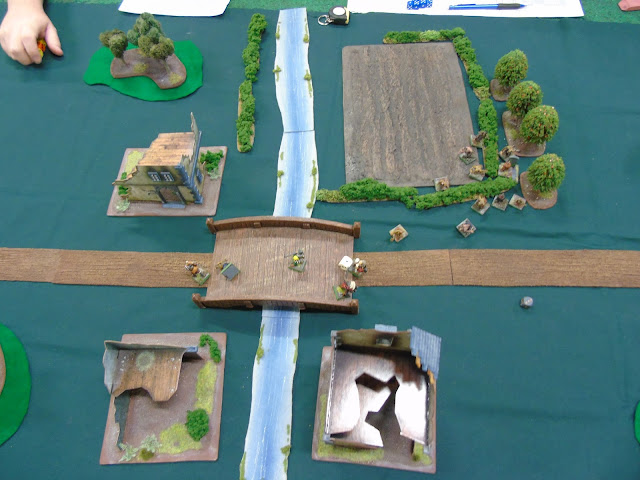 The team will quickly close that and be home before dark.  Carl has time for a nap before he rolls a one and goes carousing. 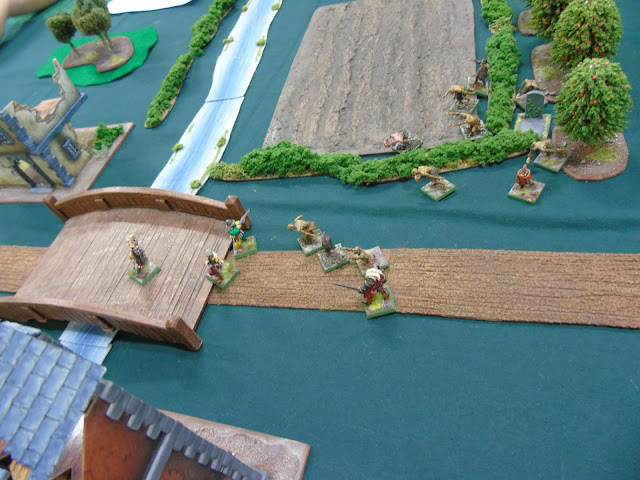 Till next time, when I'll have early war WWI Germans and some other random minis.  Hopefully more Pike and Shot and Zombie action will happen too.