Oldhammer Penitents, Psychers, French Grenadiers, Evil Wizard thing, WW1 Germans, a Catachan, a Burgundian, and the Invisible Man; plus a Pike and Shot and Zombies AAR!

Today I have some old 40K minis, a few random minis, dwarf arquebus, and a Pike and Shot and Zombie game, Rescue of the Dead.

First up are four Rogue Trader era psykers. They are metal models designed to be used with the original plastic Imperial Guard arms. 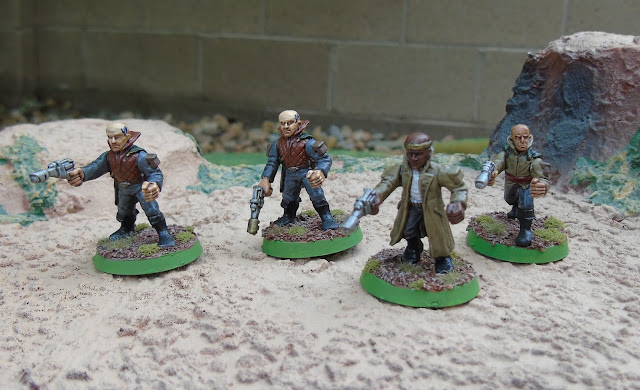 Back shot.  Their powers must be pretty useless if they have carry the crappiest weapon in 40K as a backup. 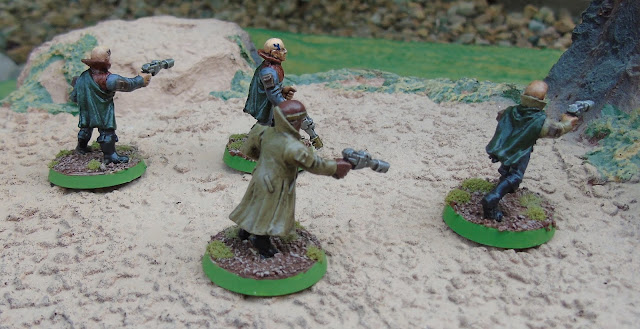 Here they are with the rest of useless psykers I've collected.  I didn't paint the big headed chaps in camo. 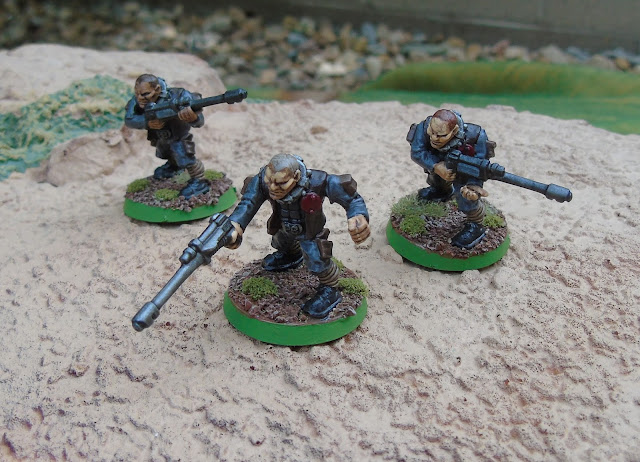 In addition to the huge collars designed to explode, if they behave badly, there's an odd mark on the back of their heads.  I imagine it's a brand.  I must have 30 more of these to paint, but they are rather dull work.  I think there's only one or two body poses. 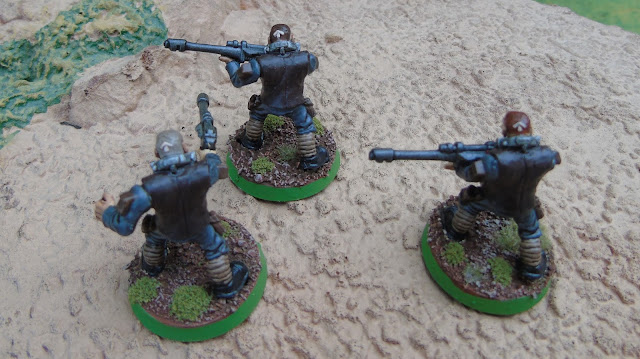 Here's a Eldar War Robot, whose paint job I am NOT proud of.  He's here because he's been bugging me to finish a paint job I started a few years ago.  He's next to two Perry plastic French Grenadiers that somehow cut ahead in the painting cue. 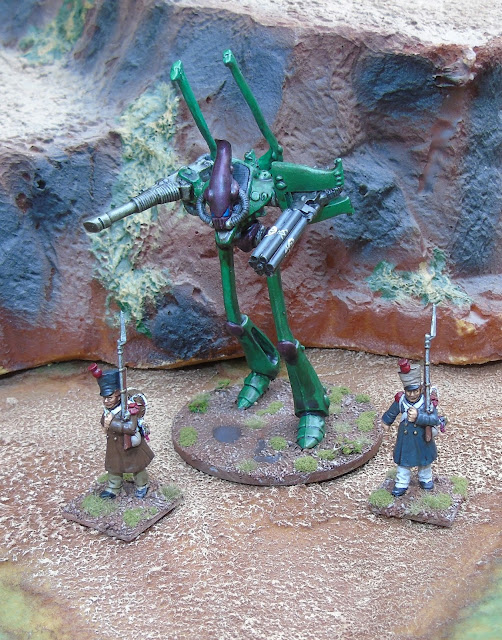 The Eldar War Robot uses the same frame as the original Eldar Dreadnoughts, which are now called Wraithlords.  The only difference is the head thing. 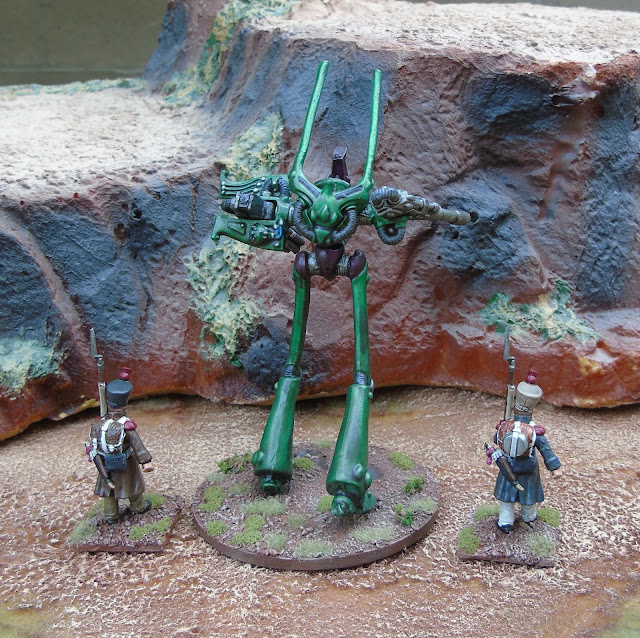 The original advertisement said the war robot is a deadly engine of destruction that no Eldar commander could do without!  That was apparently a lie, as they are long out of production, rare, and not supported by the rules. 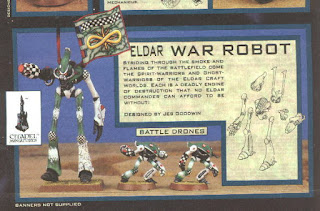 Here's a evil wizard/cleric/cultist/necromancer/psyker with two WW1 Germans I didn't paint.  The wizard thing is a Mageknight or D&D pre-paint repaint.  I only rebased the Germans, but that's good enough to get your picture taken on planet BaconfatLog. 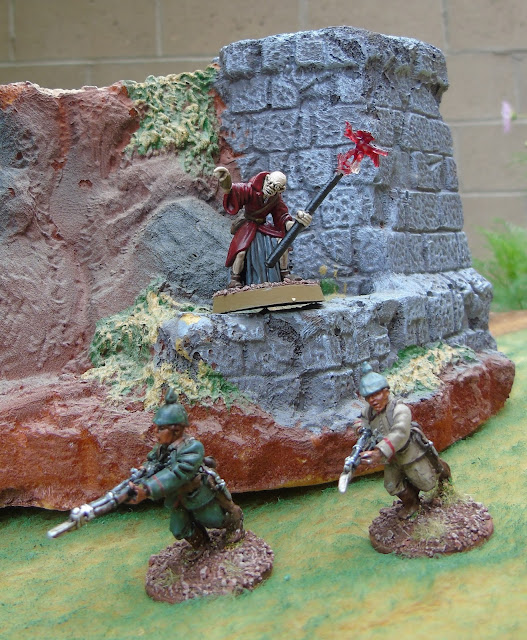 Here's a old metal Catachan Imperial Guard model, a Burgundian artillery man, and the Invisible Man.  I believe the Burgundian is an old Grenadier brand model. 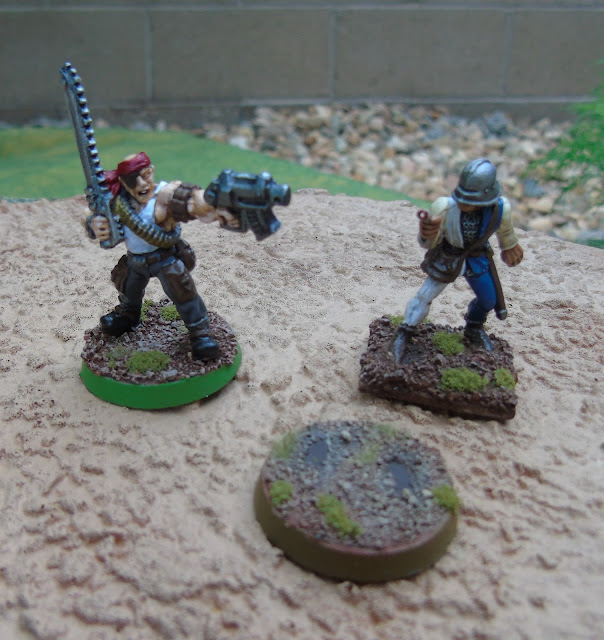 The Invisible man was painted those new clear coat Vallejo paints, that I've mentioned before. 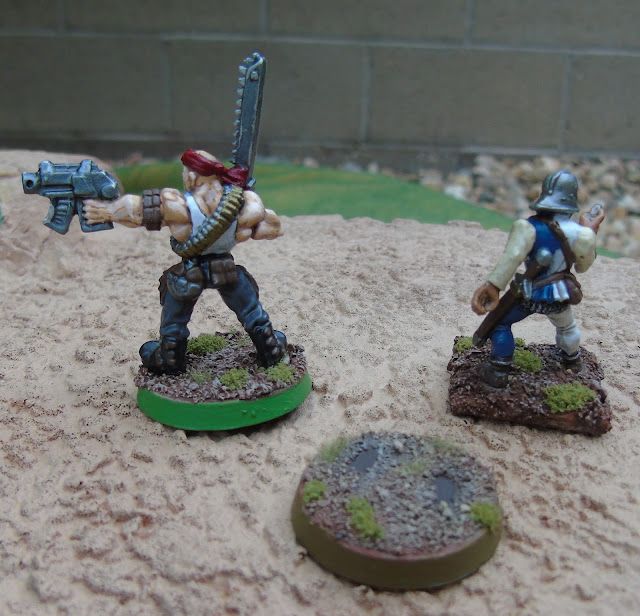 Here's thirteen Dwarven arquebus men.  They are Ral Partha models, with the exception of the larger guy, who is a Grenadier model.

There's only two poses in the Ral Partha guys, but I think I mixed up their colors enough to try and hide the lack of diversity.  The blue and white shirts are so that they can play nicely with my Burgundians.

Now on to the Action!  This was the first game of Pike and Shot and Zombies I've played in.  Our most excellent master of ceremonies, Mike, brought all of the beautifully painted models.

The mission is for these four mercenaries, Carl (?), Mario, Fritz, and Cap'n Hauser to... 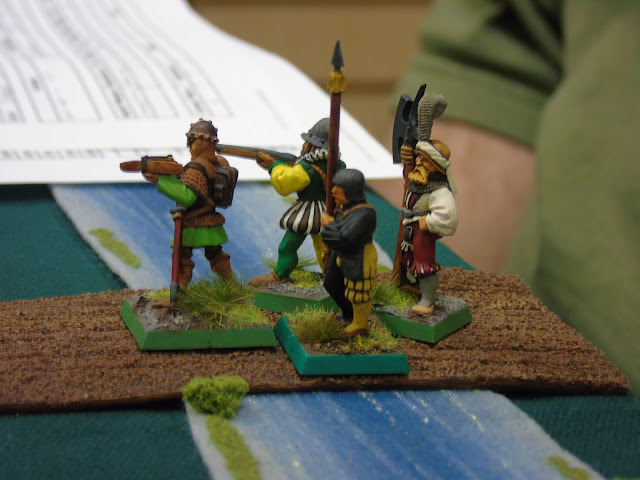 ...to travel down that zombie infested road 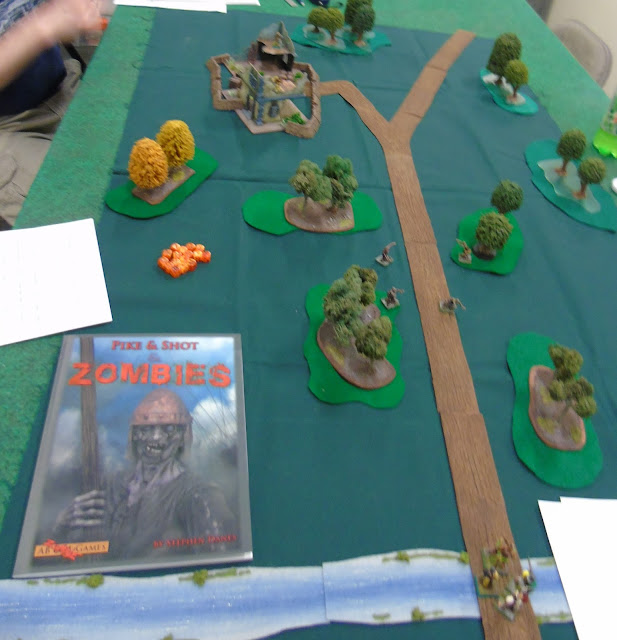 ...to this peaceful outpost... 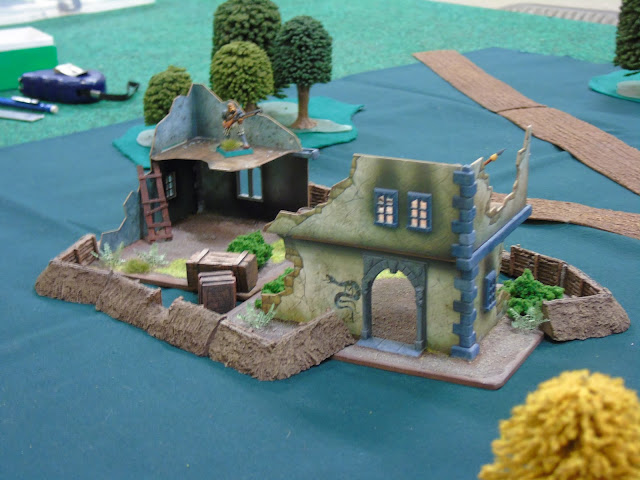 ...to escort this priest back to town. 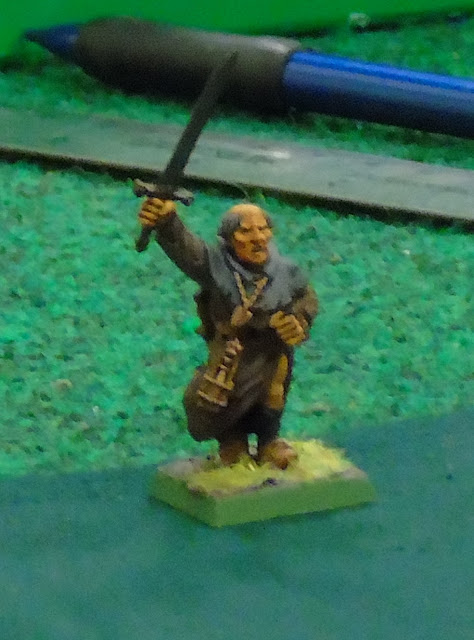 We leisurely walk down this path, joking to ourselves, that we're actually getting paid for such an easy mission.  Carl calmly puts down a walker, with his crossbow. 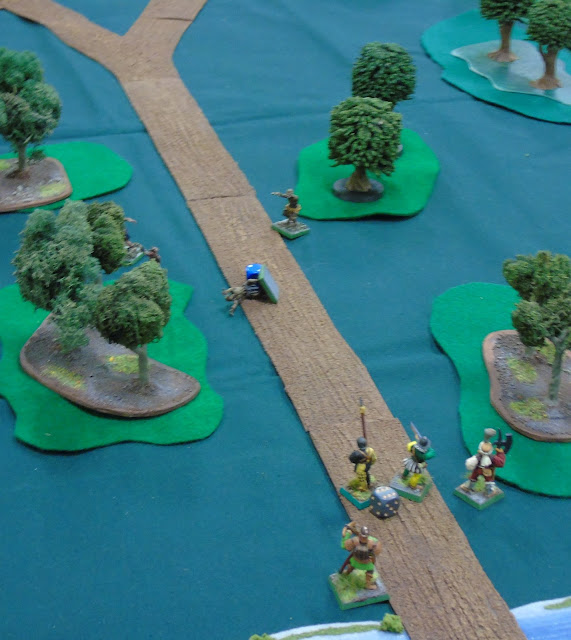 Stupid Mario shoots off his handgonne and zombies pour out of the woods.  Fritz (me) sharts himself. 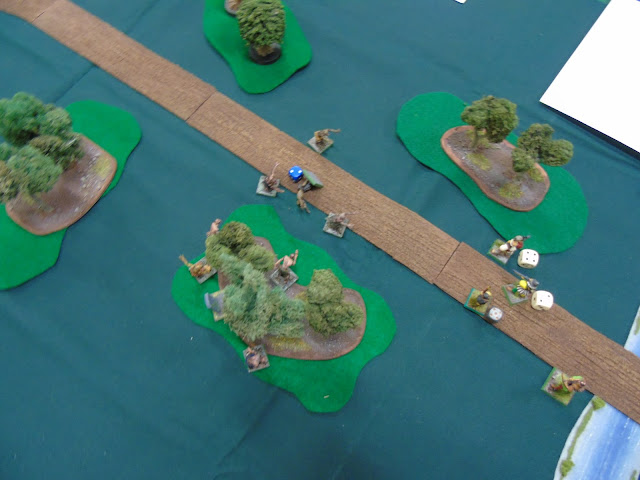 Captain Hauser and Fritz wade into the pack as Mario slowly reloads and Carl shoots up the pack. 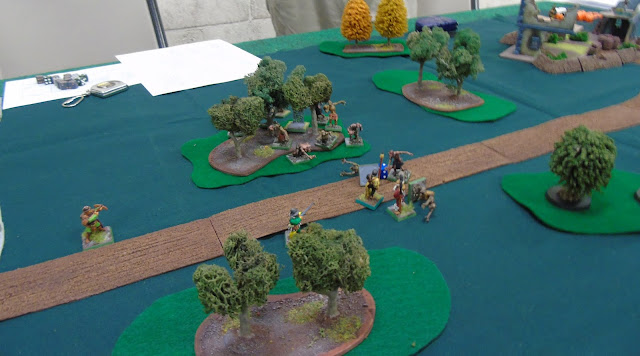 Mario runs off by himself.  I (Fritz) run past the pack towards the safety of the out post. 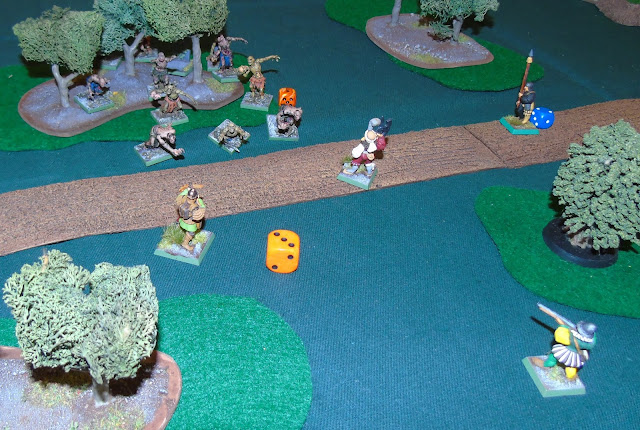 Cap'n Hauser goes into the woods to fight alone and probably to the death. 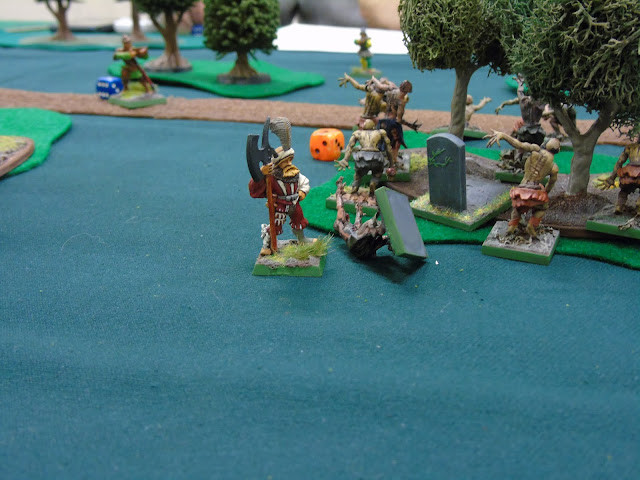 Fritz has almost made it to safety... 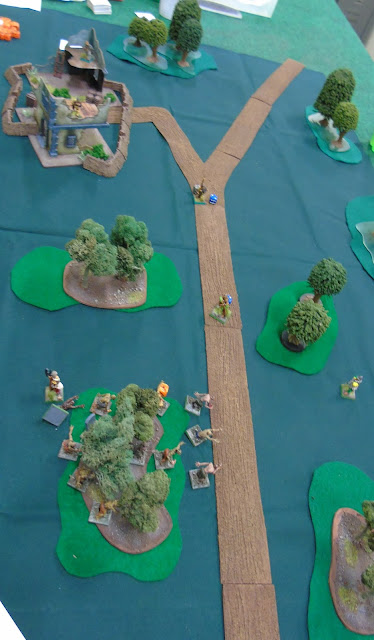 Except the damned out post is full of dead people. 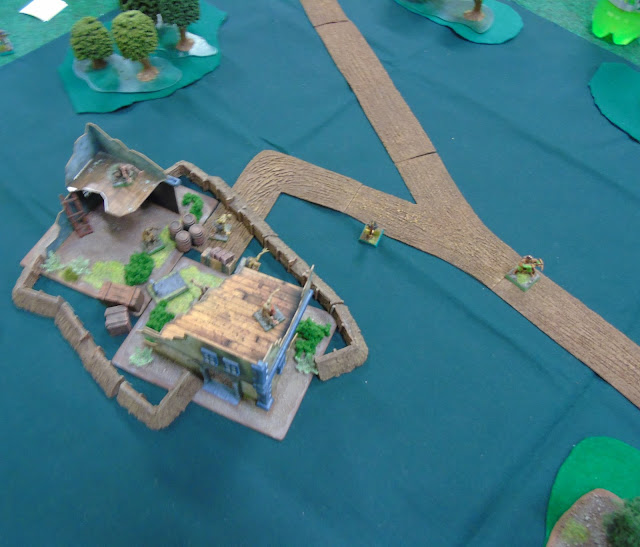 Luckily I've found the priest and a soldier who looks extremely sick. 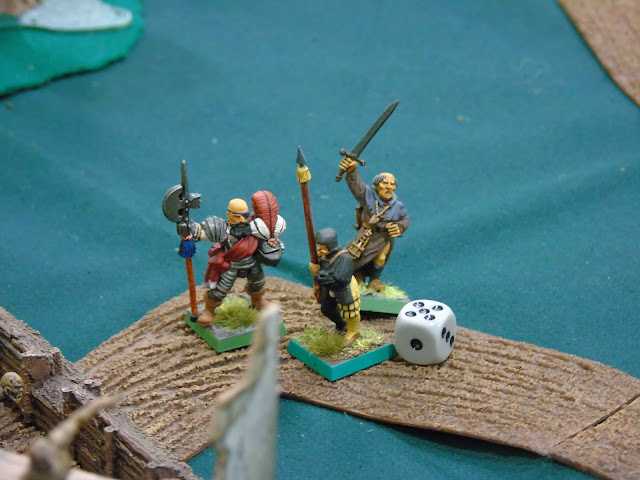 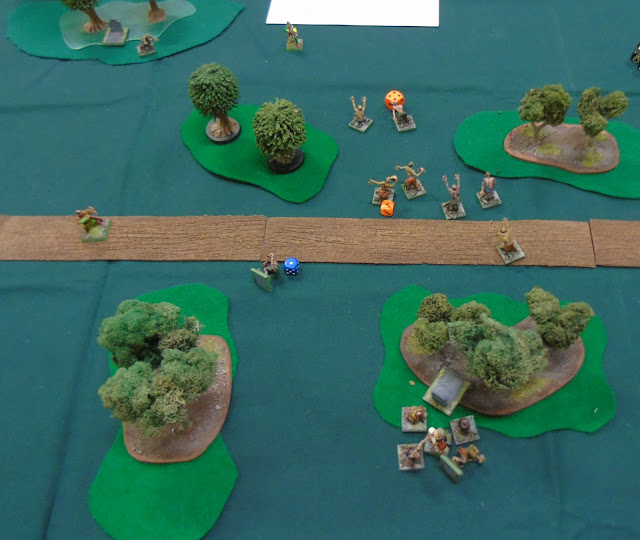 Luckily Cap'n Hauser has killed all the ones in the forest.  Though he was scratched badly by a zed. 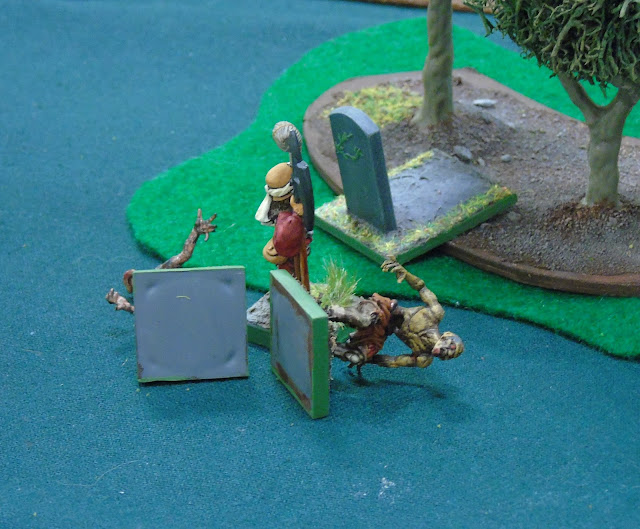 I guess Mario shot his damned gun again, because the dead pour out of another patch of trees.

I've convinced the priest and sickly soldier to follow me.

Everyone runs towards the exit.  Zombies are everywhere! 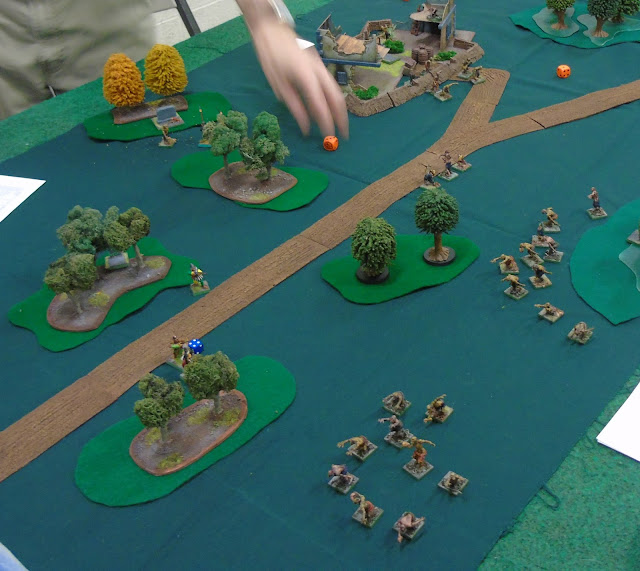 Notice the sickly soldier is missing?  He started to turn and Fritz had to kill him.  Fritz did manage to loot his body and swears he turned, even though no one saw it.  Run, priest, run!

Zombies are slow and we make it off the board! 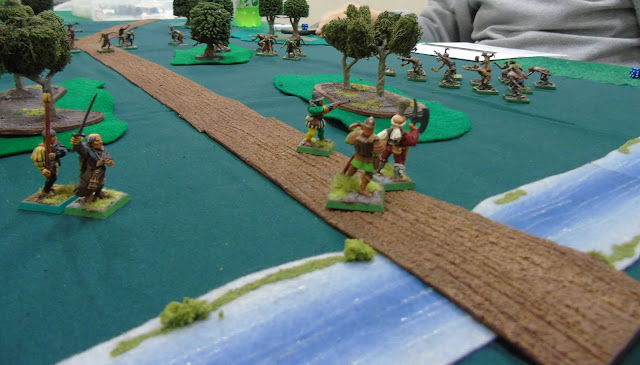 Did Cap'n Hauser become infected?  Will he live to fight (for money of course) another day?  Find out next time, when in addition to another zombie battle, we should have some WWI minis painted up and maybe even a giant robot.