I've finished just over sixty minis since the last post.  After I show them, there'll be a quick Ral Partha Chaos Wars battle.


Here are three of Wargames Factory's "The Women" survivors.

When Wargames Factory went out of business Warlord picked up there Zombies and survivors for a new game called "Project Z".  Warlord has new sculpts of male zombies that replaced WF's atrocious first box set.

Here are ten Space Mercenaries from Old Glory/Blue Moon.  You can get these from OldGlory25s.

Don't let my very uninspired poor paint job fool you.  These are nice minis, my paint job doesn't do them justice.

Here's two Games Workshop Imperial Guard models.  I hate the new title for the Guard; Molestorum Astroglide or some rubbish like that. 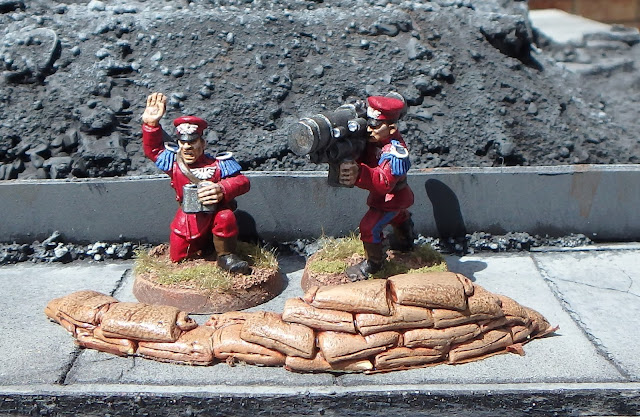 I made this test batch of sandbags out of Milliput.  They came out easy, but I think Sculpy baking clay is easier to work with. 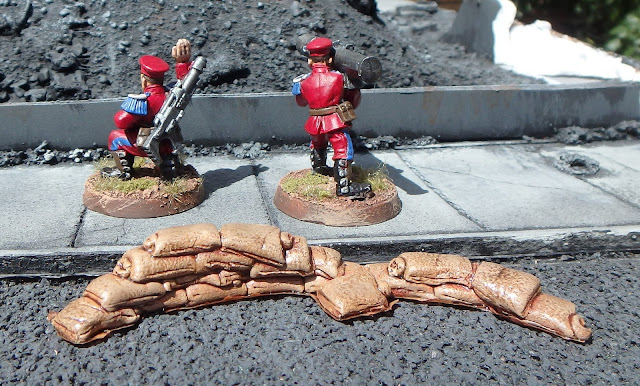 Here's a Heroclix model with pieces cut off and a new hand gun painted to look like a Fallout vault member. 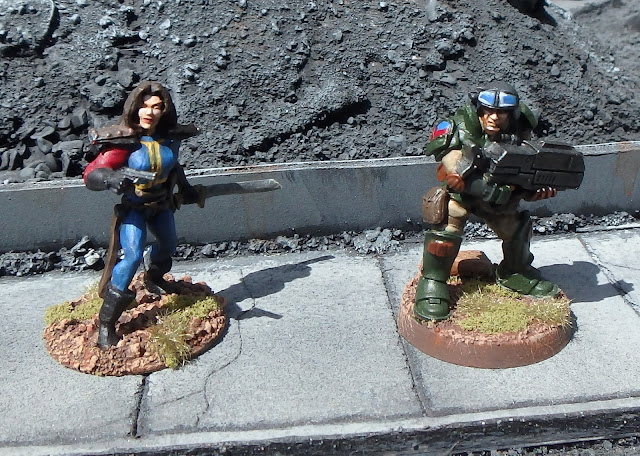 She's standing next to a cool Reaper model.  I need more of these Reaper sci-fi troops. 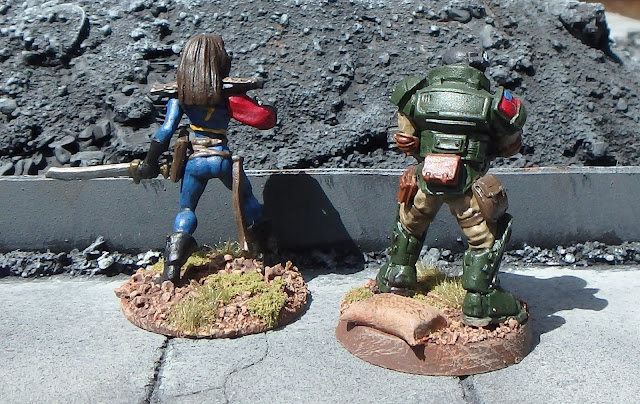 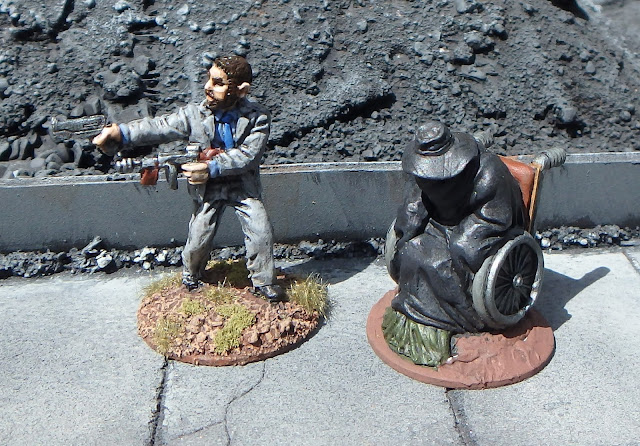 I didn't paint these very well either, did I?  I couldn't come up with a wheel chair friendly base.  I think I'll build it up with Milliput and paint it like asphalt. 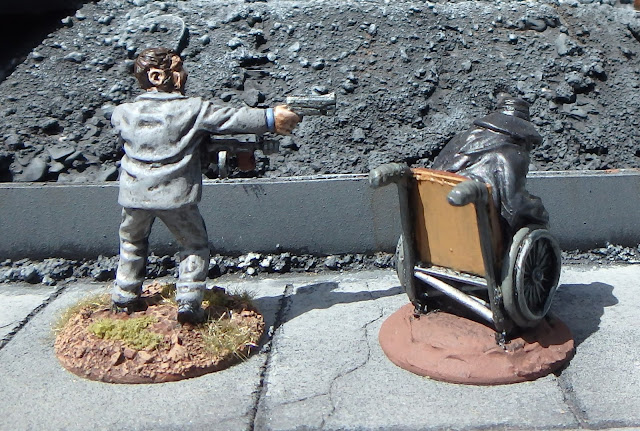 Here's a Victory Force zombie, that looked rather healthy.  I painted him up as a homeless looking survivor. 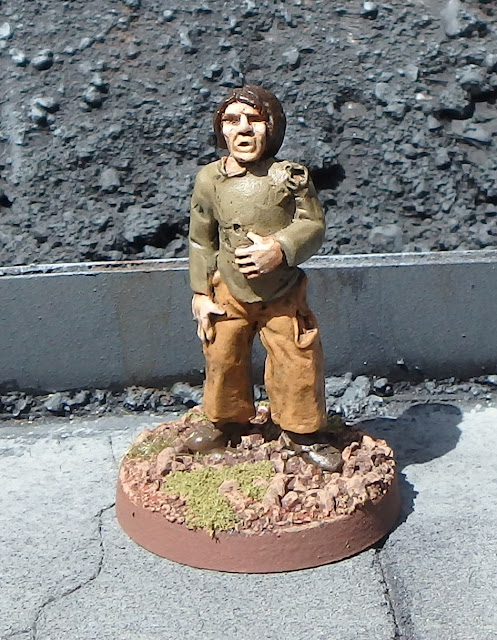 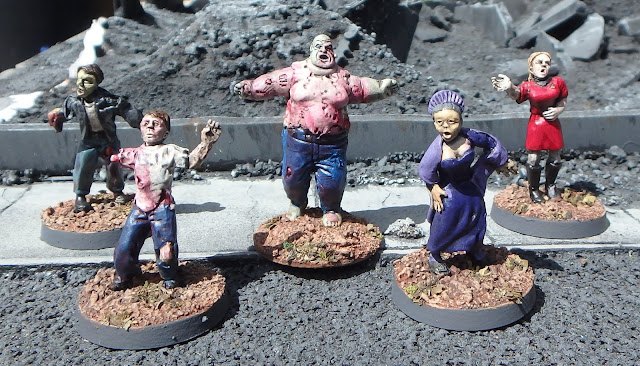 The Uncle Mike zombie has quite a few nasty bite marks. 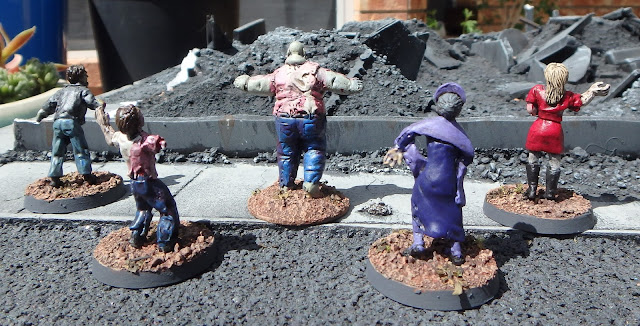 I tried to paint them up like the very dirty walkers from this season's Walking Dead.  They're kind of shiny looking.  I may save them for rainy scenarios. 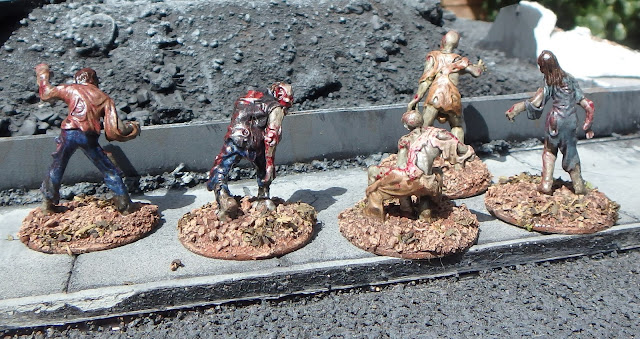 Here are the zombies shambling towards the suvivors.  I'm very excited about the new Warlord Project Z and Mantic Games Walking Dead games.  I just don't know if I need to get both games. 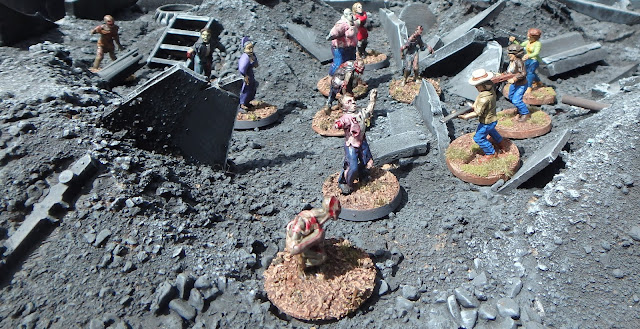 Here's three classic long out of print Citadel GW Ogres.  They have so much more character than today's fat bald guy Ogres.  The ogre line is probably dead now anyway, now that they've destroyed the Warhammer world.  It's all Space Marines, demons, and naked dwarves now.

You'll notice that I forgot to put vegetation on their bases.

Here's a Gorgon from Reaper miniatures. 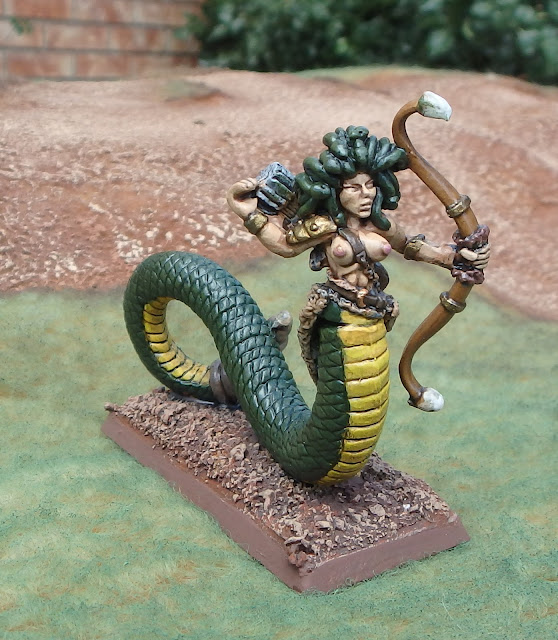 I forgot her vegetation as well. 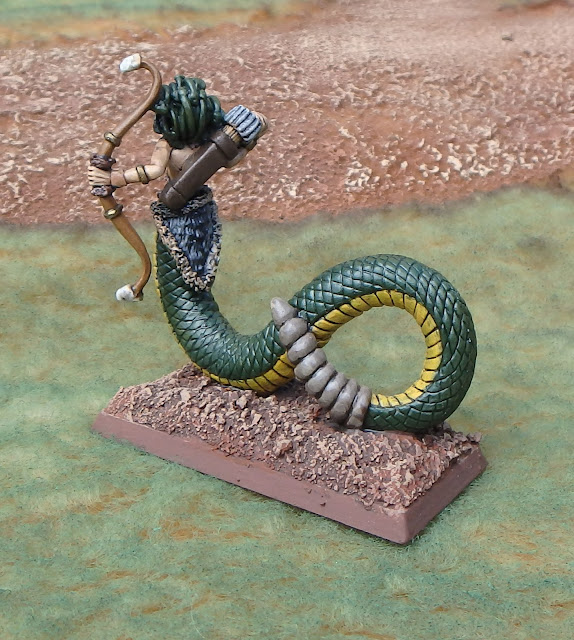 Here's two Perry plastic Frenchmen.  I don't know why I double based them. 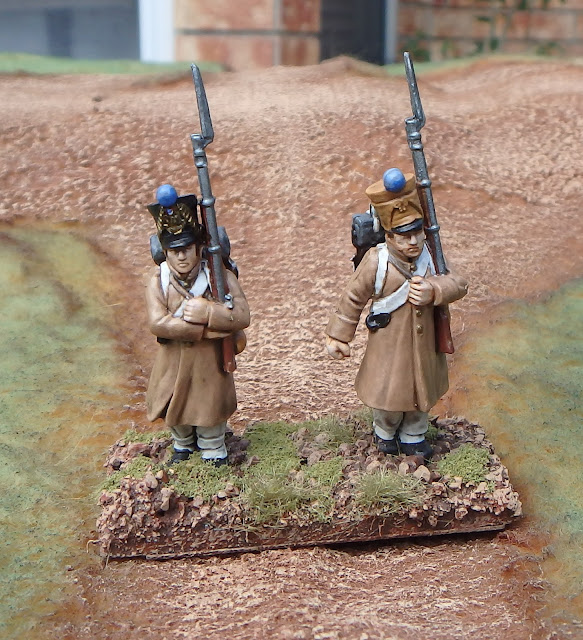 They're wearing Victrix back packs, with great coats rolled up.  At least they'd be warm in Russia. 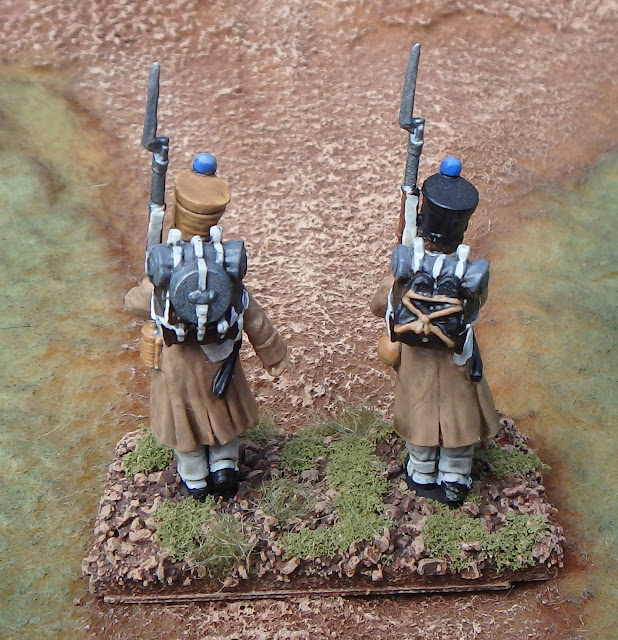 Here's a Rus with a long spear, a Foundry model of unknown nationality, and a Old Glory Revolting Peasant that will join my Rus army. 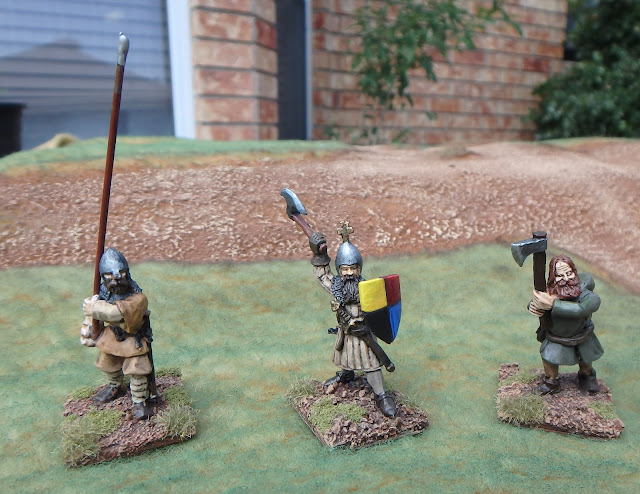 Looking at the house in the background. 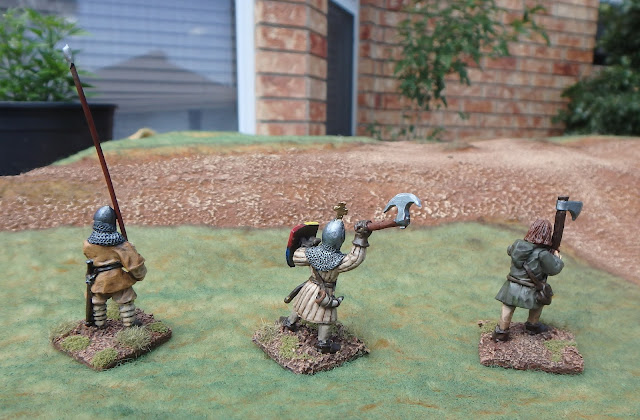 Fighting over a horribly sculpted treasure pile I found in a bits box.  I wish I knew who made this.

Five Gondorians, not on the big GW trophy bases.

Trying to see what the Rus guys were looking at. 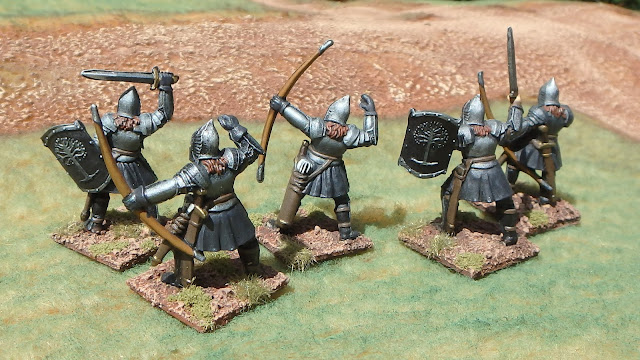 They seem to look a little shiny.  I may have overdone the protective coating. 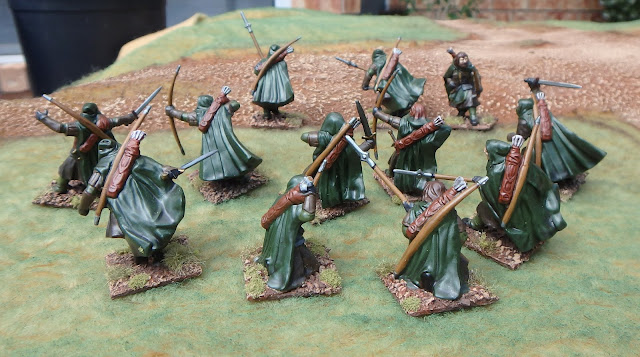 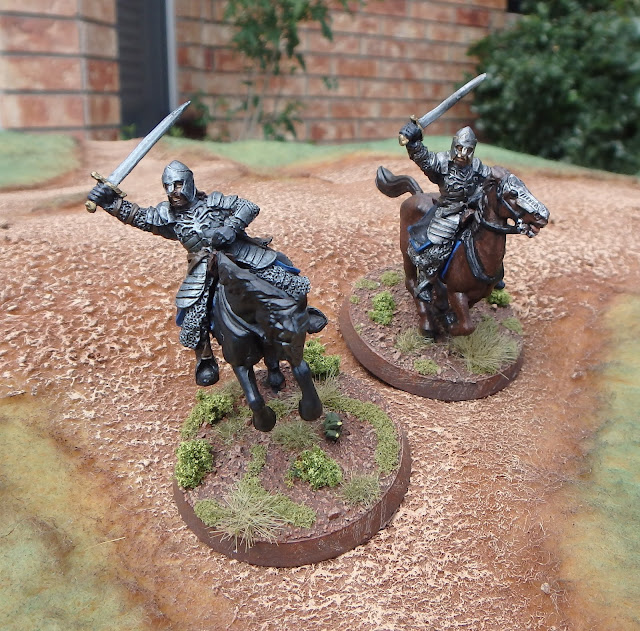 One of them came used, I think previous owner let a monkey paint it. I hate stripping models and can't honestly remember which one has two coats of paint and I didn't have to prime it. 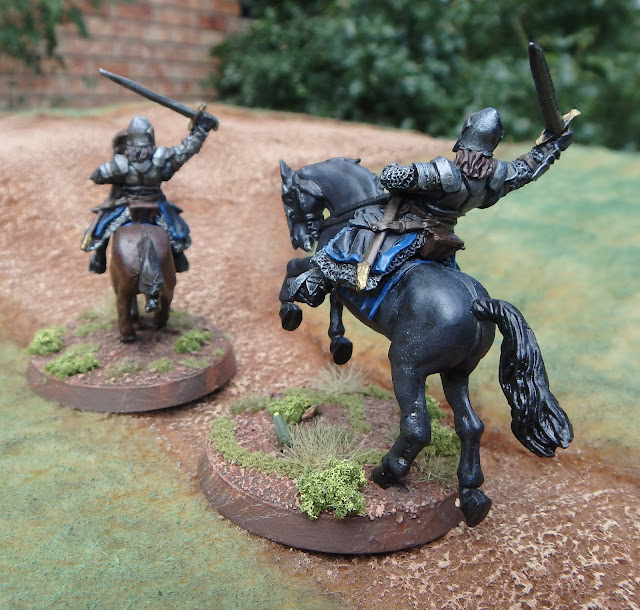 On to some action, with Ironwind's update of the Ral Partha game Chaos Wars.  Chaos Wars are free from Ironwind.


Neither of had ever played and came up with completely different forces.  Ivan had Elves, 2 mounted knights, yeomen spears, peasant archers w/longbows, and four heroes and a wizard. 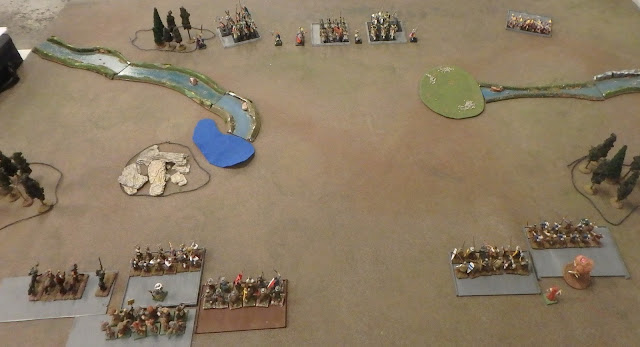 Here's the left side of field.  I brought evil humans: yeoman crossbow, yeoman bows, two yeoman melee units, some centaurs, a group of fighter mages, two wizards, and a demon thing.  I bought crappy level 1 heroes as cheaper leaders to try and get the initiative.    ﻿ 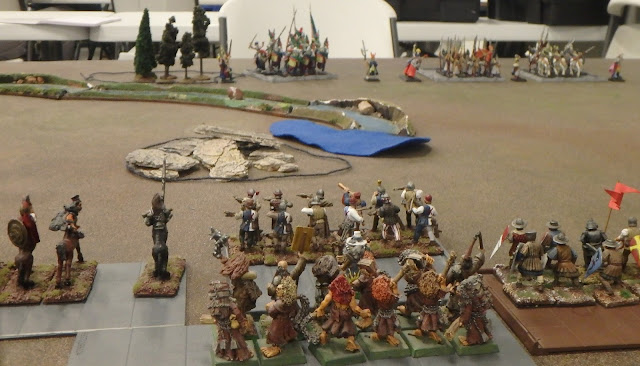 Here's the right half of the field.  I split my army into two halves to make it difficult for the smaller enemy to take us all out at once.  I'm hoping he'll charge through the gap in the middle of the field, so I can pincer move him. 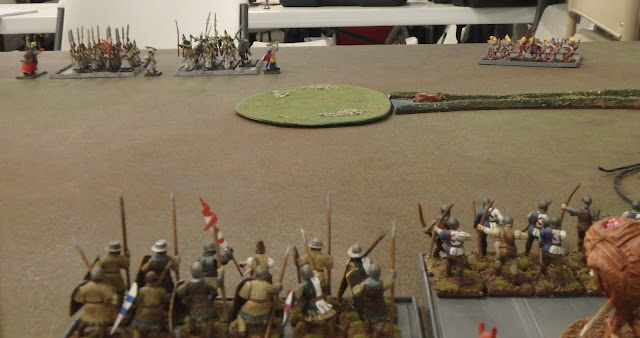 He's slowly advancing.  The longbows on the far right out range my bows and cause casualties.  Luckily my wizard had cast "universal balance".  The peasant took damage and failed morale.  Don't waste longbows on peasants.

They spearmen advance and get shot to hell by the wizards and archery. 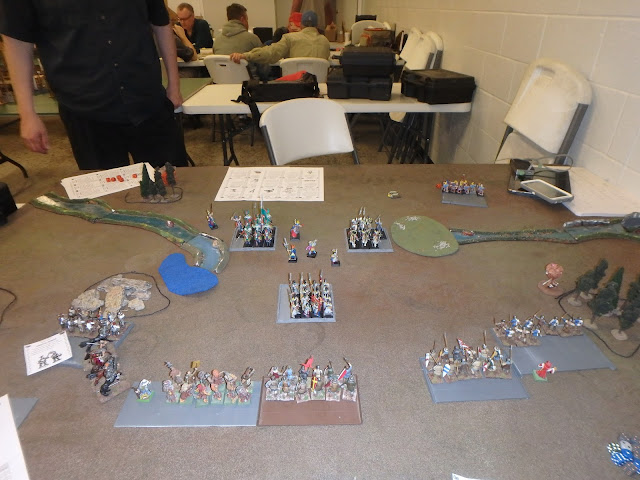 There's a lot of shooty pew pew and mounted elves are going to charge my archers (see the red line).  The demon and yeomen charge him immediately after 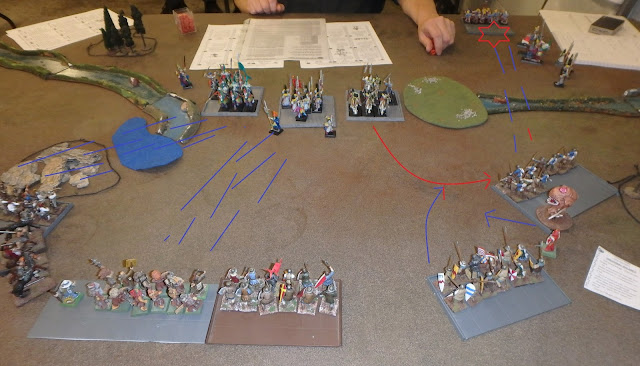 The elves and archers are annihilated (see smoke poofs).  The yeomen suffered a lot losing half the unit. 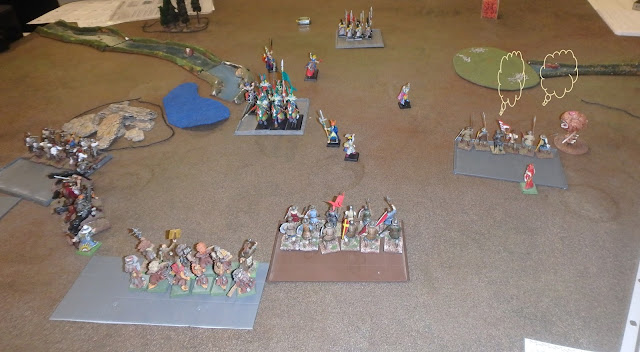 Next turn, a lone hero charge my yeomen and the other mounted unit moves towards the fighter mages.  Another hero wiped out a unit of yeomen (which has already been removed). 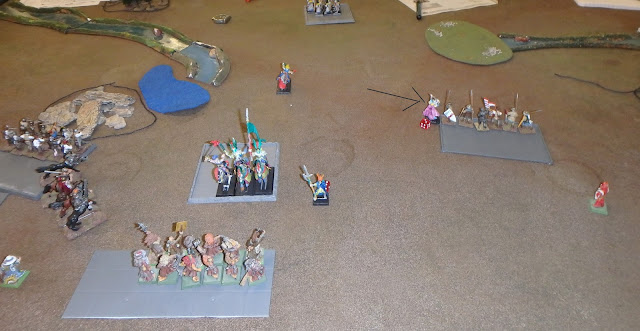 The fighter mages blast away with spells hurting the knights, before a unit of centaurs hits the flanks and wipes them out. 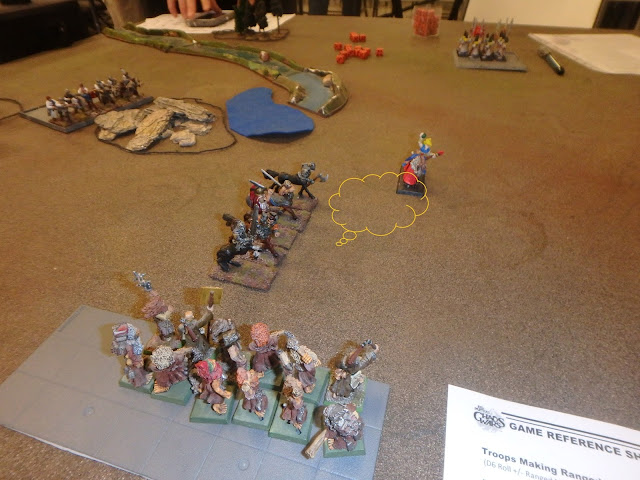 The demon charges the hero who is attacking the yeomen.  The hero kills the demon and sends the remaining couple yeomen fleeing. 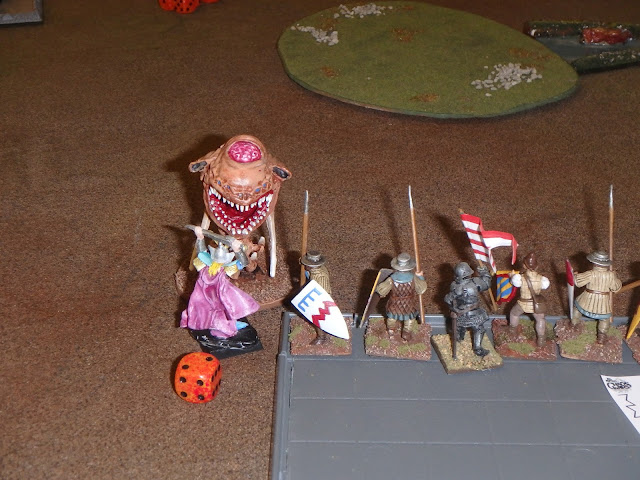 The elves have annihilated three of my six units, but have lost all four of theirs.  All that remains for the elves are two characters who plan to go down in a blaze of glory.

They go down in a blaze anyway.  A blaze of crossbow bolts and wizard spells.  I tend towards cowardice and would have fled.

Chaos Wars is quite fun and an improvement over the 1980's rules.

lessons:
1. We learned packs of fighter mages have to be taken out immediately.  They're soft but pump out a literal crap ton of magic.  I would shoot them with crossbows.

2.  Don't put strong heros in units, they  can't fight.  Use crap heros as leaders.  Have lots of leaders to win initiative, I had seven I think.

3.  Shield cavalry until they are really in charge range.

4.  I often don't understand rules and Ivan is very much so smarter than me.  We would have played a very different game if Ivan didn't have his superior reading comprehension.

5.  Peasants suck and run away at the first chance.  Don't pay the points to give them weapons, use them as God intended, as meat shields.

Till next time, when I'll have Dwarves, Dacians, Prussian Nappies, more Survivors and probably some random minis.