I've been extremely busy at work (13 days straight) but I did manage a little bit of progress on my Perry British. Actually after taking this picture I put a couple more hours of painting in and they're farther along than shown. I despise painting straps.

Hello,
I've started another batch of Perry Plastic British. There's 22 regular line troops with Peninsular shakos. They've been primed a displeasing watery white (Valspar Flat White). I glued them to 20mm cardstock bases, as I'm too lazy to buy magnetic strips and metal bases. 20mm is good for Sharps Practice and the fan made versions of Warhammer Napoleonics based off of Warhammer Ancients. 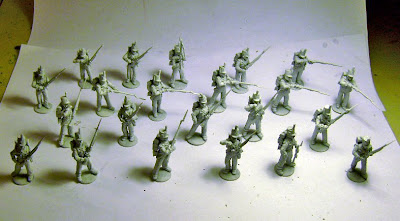 I used Vallejo Fair Flesh on the skin parts, though someone's hands got missed. I should have used a darker tint as I imagine a little time in Spain and Portugal would have given them a little human color. At least they'll match the first batch. I used Vallejo Gory Red for their jackets.

There's lots of work left, but assembly line painting does speed things up. I still have another 40 models left to even assemble, but I think I'll do a few French up as zombies first. I remember one of the wizards in the book "Jonathan Strange and Mr. Norrell", necromancing up some deceased French soldiers to aid the British cause.
Bacon
Posted by Baconfat at 5:41 PM No comments: