WAB Fail, Black Powder Draw, and Housewives of the Undead

I played a rather bloodless game of WAB the other day at the Game Matrix as part of our Dark Ages Campaign.  My gentlemanly opponent Ron's Vikings have had to put up with tactics of avoiding combat most of the game.  It's pretty silly to play war and avoid bloodshed.

Here's how we set up (Byzantines on left).  My plan was simple as my motto is to keep it simple and stupid, or something like that.  I simply rush all my tough units to one side of the board to pick off his units one at a time, while my skirmishers pester his other slow moving illiterate chainsaw wielding barbarians. 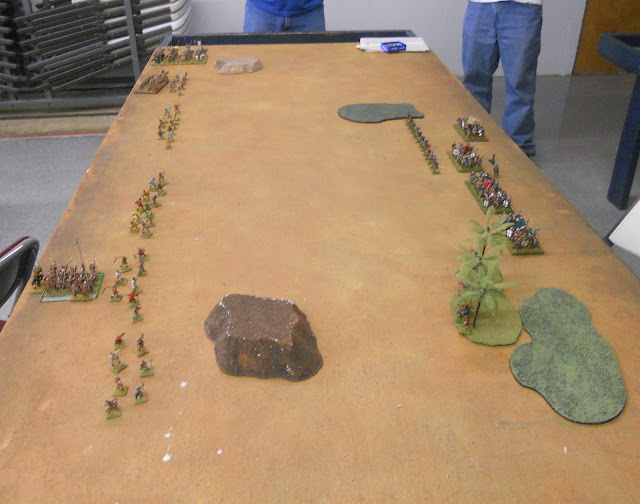 My plan was working.  Archers had dispensed with one skirmisher unit, weakened one heavy unit enough to charge, and even snuck up behind a shieldwall.   The problem was that the game only lasted 6 turns.  We never got into hand to hand combat.  I lost one slinger and the Vikings maybe between 20-30 men. 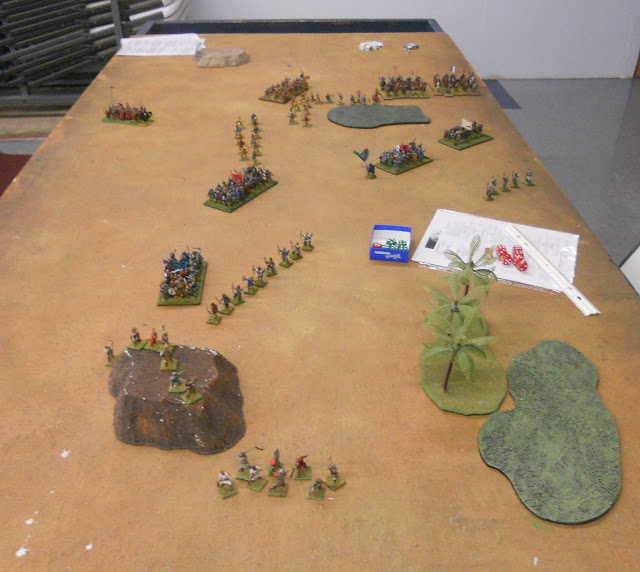 I also recently played a fun game of Black Powder with some of my Prussians with Dean of our same club's evil French.

Our mission: take back Christmas Village and run off the vile French. 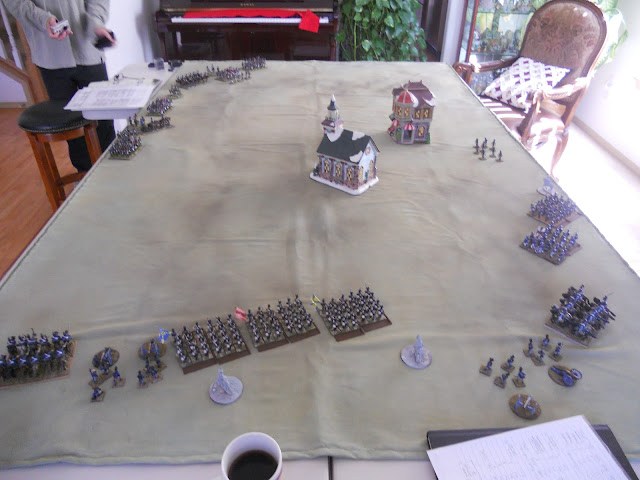 Completely outnumbering the well painted Frenchmen, the brave Prussian surge forward with fairly good Command roles and bravery.  Bravery came from  Dean poisoning my coffee with copious amounts of delicious rum and brandy causing me to lose my thoughts. 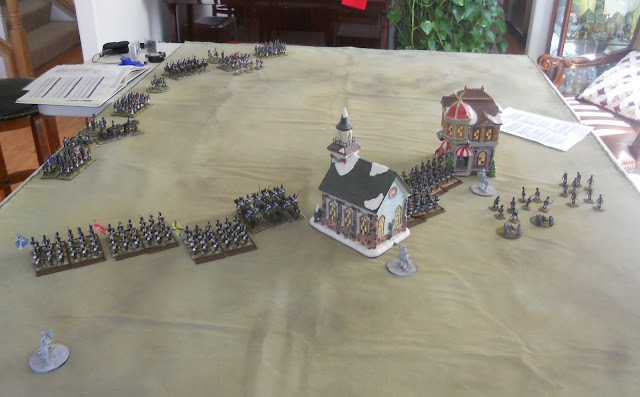 We crash into to the emperors line and sort of lose steam. 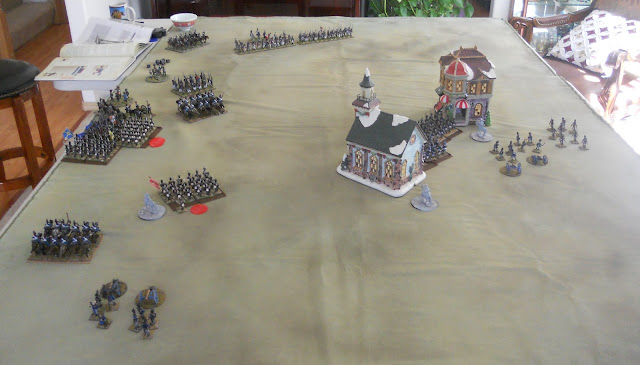 Another angle of the action. 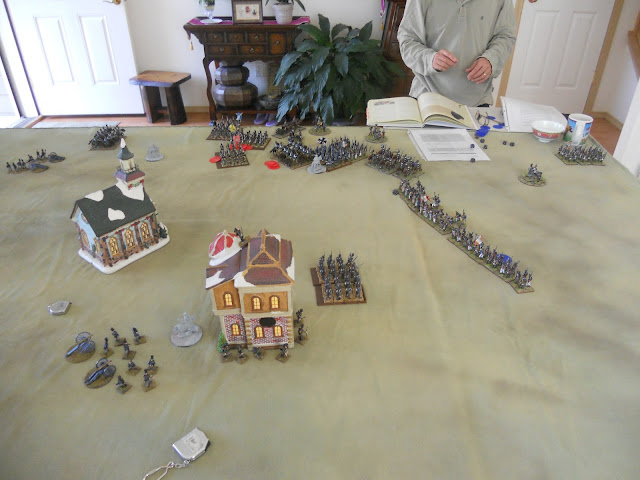 Close up of the swirling action, my brave hordes battling a ...... 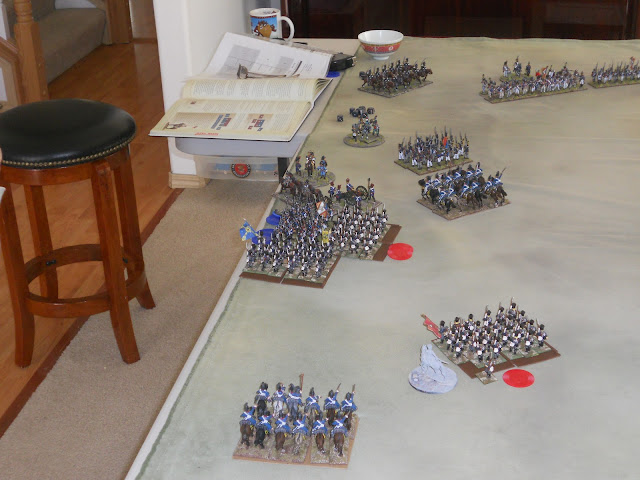 ...........a unit of French that continually take huge numbers of casualties, yet fight on. 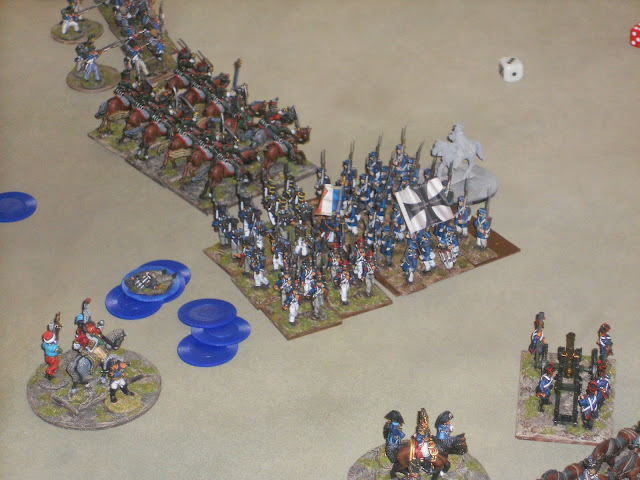 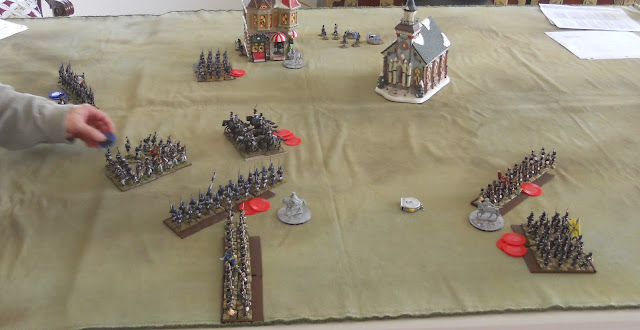 The game was a draw, even though I had more cavalry, more infantry and more artillery.  The simple answer is to paint more Prussians.

In the mean time I've finished painting some more undead.

These are female Victory Force zombies, from one of their horde sales.

If you like heavyset bald zombies, you'll love Victory Force.

The zed second from left is wearing an Air Force PT suit.

Next time I'll post pics of Prussians I've recently painted.  And probably some other random stuff.

Perry and Foundry Prussian Comparison, French, Gondorians, and a Zombie

Hi,
I've finally finished painting some models and decided to post a few pics.  First up are two 12 model units of Prussian Cuirassiers.  Foundry spells it Kurassiers.  On the left on are Foundry and the right the new Perry Brothers models.

I've based each 12 model unit the same, two 3 model bases, two 2 model bases, and two 1 model bases.  The plan is to be able to use them for either Black Powder, Waterloo, or fan produced WAB rules.

Below is a quick side comparison of the two brands.

Here are some nice Perry French artillery with crew.  I dipped these in Army Painter and looking at the photo, I don't think I dull coated them enough.

Speaking of dipping,  I did the first in a series of dip experiments.  Here is the least exciting.  I spray painted four dull GW LOTR Gondor Archers flat black, dry brushed Vallejo Gun Metal, then slapped on a few details.  Left to right, I dipped them in Army Painter Dark Shade, American Walnut Minwax, Black Onyx Minwax, and GW Black Ink.  They've been dull coated with Armory dull spray and they all look almost exactly the same (unlike some Biblicals which I'll post another day).


I also painted some LOTR goblins and orcs.  All were Army Painter dipped as well. 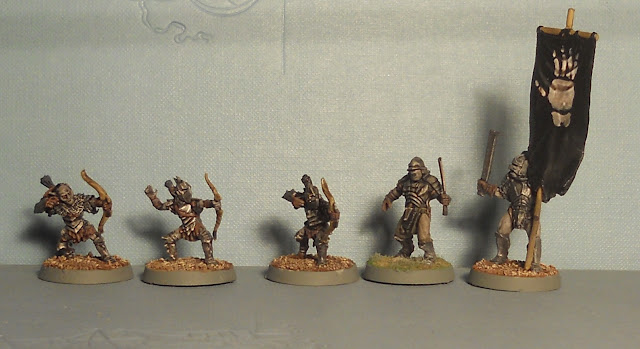 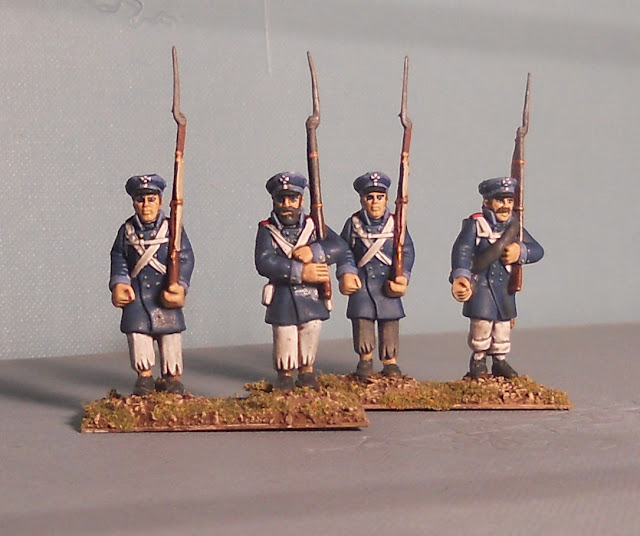 I always keep spare models around to use up spare paint out of the squirt bottles.  Left to right are what are an EM4 Scavenger (wetf that is), a Ral Partha Hoplite, an Old Glory Kindernacht, a GW Familiar, and an unknown archer.  You can't see the hoplite's hand painted shield that I was quite proud of.

That's all for now.  I should have some more WAB battles coming up and I'm about to start painting more Prussian foot troops.