I've been avoiding Napoleonics for years out of both fear of painting the models correctly and complexity of the rules.
When I heard Rick Priestley and Jervis Johnson wrote some Nappy rules I was curious. Rick Priestly wrote the original version of Rogue Trader Warhammer 40,000. As a youngster, there was no book I enjoyed more. I subscribe to the terrific Meeples and Miniatures podcast and they did a great review of the Black Powder rules. The podcast made the decision to buy the rules final and I went to the Warlord Games website to order it.
I needed some troops to push around, so I ordered the new Victrix British foot artillery box set and two boxes of Perry British Line Infantry. Black Powder is really a large battle game, so I will have to buy many more models. 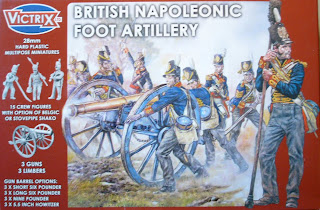 The Victrix box has carriages and limbers for three artillery pieces. There are pieces to make up to three short 6 pounder guns, three long 6 pounder guns, three 9 pounder guns, and/or three howitzers. The 15 accompanying crew have optional heads for Waterloo and the Peninsular war. The only thing I don't like about the crew is that there are three officer bodies. I really only wanted one with 15 crew. The arms are numerous and you could possibly make 15 different models. A number of the arms have flash in the fingers making clean up and assembly an onerous task. 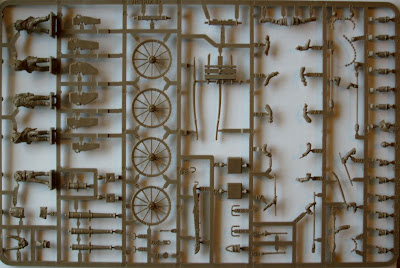 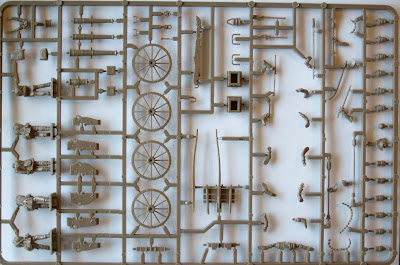 I assembled one guns and I started to wish I had spent more and bought metal models. The guns are amazingly detailed and some of the parts are quite fiddly. In particular the chain instructions were ambiguous and hard to attach. I probably did the chains wrong. The worst part was the fiddly little tiny lever thing that is used to raise and lower the barrel for trajectory. I may not attach the latter to the rest of the guns.
There are artillery rules for March of Eagles included, if anyone actually plays those. 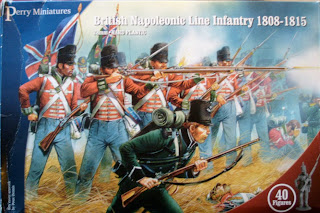 The Perry boxes had far less flash and what seems to be slightly better sculpting and tougher plastic. The good thing is that Perry and Victrix match up very well is size and proportionality. Each Perry box has 40 models including 5 command models: two standard bearers, an officer, a sergeant, and a drummer boy. There are four riflemen and 31 line men. You can make up to 8 with the shoulder wings to designate flank troop grenadiers and/or light infantry. There are enough heads to either make all the models either Waterloo or Peninsular war. There is also a little sheet inside with painting guide for various regiments. 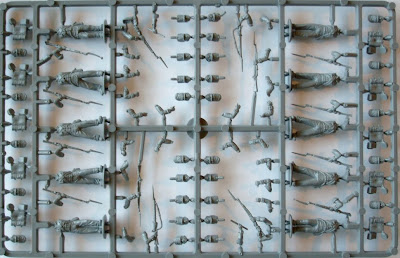 I've only started to read the Black Powder rules but so far they are well written and the book itself is beautiful. It's 186 pages, hard bound, and full of eye candy.
The rules seem easy, but I've starting painting the artillery crew and that isn't going so well. I'll post pictures of them when some are complete.
Posted by Baconfat at 1:36 PM