Intel reports have mentioned the Germans are bringing heavy machine guns to tomorrow's "The Great War" battle.  Worried that the good guys might not have enough bodies to soak up all the German bullets, I quickly finished block painting two British infantry units including Lewis guns, as well as two Lewis guns to add to infantry units without them already.

The Old Glory models still need to be dipped, touched up, maybe highlighted, and have their bases painted in 19 hours.

I based them on washers, half with sand and half with wood putty.  I'm curious which will look better.  Wood putty may lose out regardless, due to how time consuming it is compared to white glue and sand.

Second is a group of Old Glory Prussian Artillery crews for my slowly growing Prussian army.  They've been blocked painted and still need alot of work.  Once them and their guns are done, I'll start working on a box of Warlord Prussian Landwehr.

I hope to have some zombies done by the next post.

I made it the afternoon session of Fix Bayonets II, I was almost late for that and almost missed out on being in a game.  I know I missed out sleeping in, but I love sleep.

Bill V. was putting on a classic game of Imperial, which I managed to get in on.  I haven't ever played the system, but Bill V. (true professional)  made it run smooth as silk.  I think it was the battle of Islandwala.  Please forgive me if I'm wrong Bill, bad short term memory and my Zulu-Anglo War knowledge is weak at best.

The British made the error of separating their forces, as they were supposed to.  The first wave of Zulus, arrives on the field. 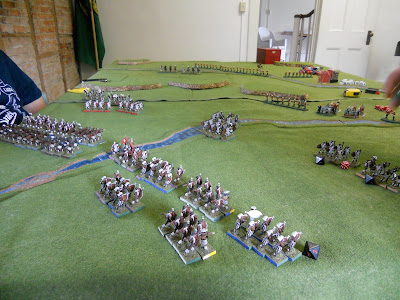 The wave crashes into the first red line.  I being a Zulu general tried to keep away from the big guns.  I failed somewhat, but so did the British gunners. 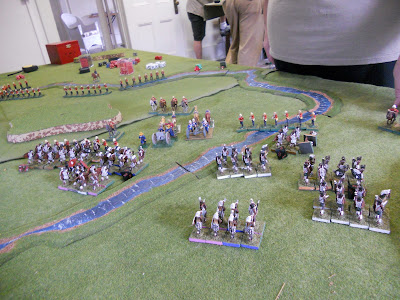 The first British force is being completely over run.  I would have ran back and formed with the others as quickly as possible.  But the British are apparently too brave. 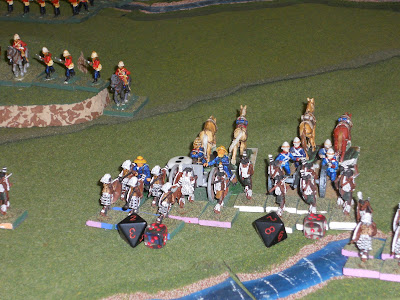 Sorry for the crap AAR, whole turns are missing, I took a bunch of fuzzy pics and almost none of my allied Zulu Chief Adrian's left wing.   I also missed all the cavalry action. 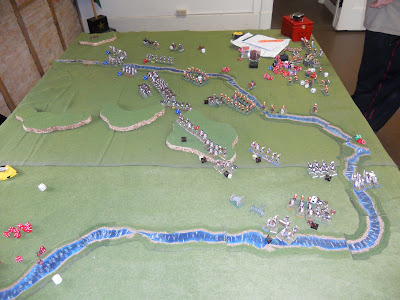 Bottom line, Adrian made it to the second line fairly unscathed and between the two us we annihilated two large infantry squares of British, before we all decided it was immoral to continue. 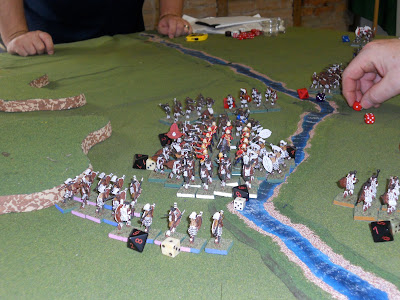 Bill's minis were also mostly classic Ral Partha minis, sculpted by Tom Mier (spelling) I believe and were terrific.  I simply love the look of those minis.  Smaller by today's standard, but incredible sculpts with nice proportions.  I'm extremely jealous.

If you're out there, Bill V. thank you much for an awesome fun game!  It was great.  If you put it on again, I'd love to try the other side.

You can see more pictures of the great game and event at the Puyallupwargamers yahoo group or on a couple great blogs: wabcorner.blogspot.com  or   http://rassilonsmatrix.blogspot.com

Met friends at the Game Matrix in Tacoma, WA for an impromptu "The Great War Game".  The trench terrain I've been working on slowly was done enough to be used for a game.

The field was 8' x 4' and an assaulting British, French, and French Foreign Legion force assaulted trenches occupied by an outnumbered company of Germans (accompanied by a tank).  Rough terrain really slowly the assault, but more importantly kept the tank at bay long enough for allied troops to reach the Germans. 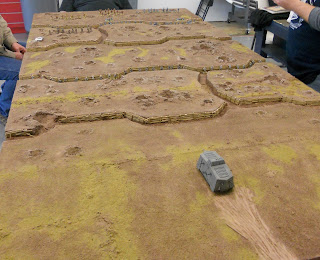 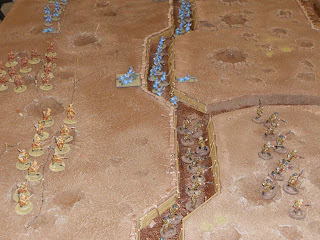 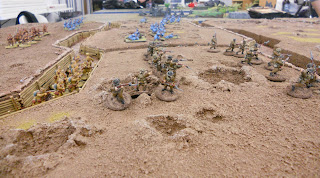 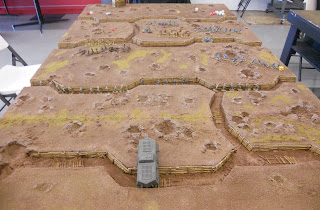 Fun game, no points, just people showing up with random troops.  We were refamiliarized with the rules which we hadn't used in awhile.  A host from the SoCal Warhammer podcast showed up to see the game and has plans to host an exciting "Over the Top" game later this year.

The models didn't enjoy the game as much; casualty rates for our enjoyment were shockingly enormous.

More pics and a better synopsis can be found at a great blog http://wabcorner.blogspot.com/
Posted by Baconfat at 8:59 PM 4 comments:

Step by Step: How to Make Mediocre Sandbags Slowly

Hi, I needed sandbags to line the walls of the trench table I've been working on.  I wandered around the Youtube and found several videos showing the use of Sculpey polymer clay.  I thought I'd try it and tell anyone listening how it went. 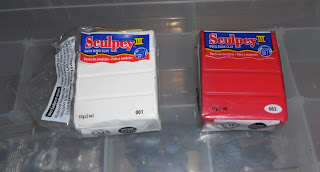 1. Roll balls of the Sculpey into thin long rolls.  The beer can pull tab is for scale.

2.  Squish the Sculpey down with a flat surface, above and below.  You can see I didn't squish it much.   If your rolls where too thick you'll have unmanageable large sandbags.  Most sandbags I see available for purchase or in sci-fi dioramas are way too big.  Sandbags are actually not very big; soldiers need to be able to fill and move them all day; large and extremely heavy bags would wear the troops out quickly.  I wanted my bags to be about as wide or just wider than a model's foot is long.  I picked a large GW model as the foot model, so the bags wouldn't look silly.

3.  Press cloth gently into Sculpy to give the sandbags texture.  I pretty much ignored the sides and and only pressed on the top.  I figured out quickly to match this step with the squishy one.  I used an old worn out t-shirt (that I was wearing).  Made nice thread marks, too big to be realistic, but looked nice, if they were really that small you wouldn't be able to see the texture.

4.  Chop the sandbags into sandbag size chunks.  Longer than wide.  Use a rounded edge cutting tool.  Flat cutting tools don't round the bag edges.  I used the handy beer can tab.

6.  Ignore the fact that the bags don't have the little openings where sand is poured in and tied shut.

7. Bake in the oven as directed on the wrapper. 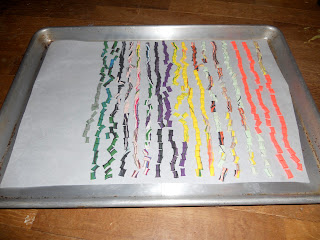 8.  Panic, because you were distracted playing Fallout and didn't remember to check on them on time.  They're ok though.  Drink a victory beer after burning your self pulling them out of the oven and picking them up to look at them too early.

10.  Curse, because you didn't use primer and the crap paint you used isn't sticking to the sculpy well.  It's also to glossy and now you'll have to dullcoat or dust the bags.

12.  Curse some more.  Because only some of them are covered.  The paint isn't sticking and now it looks too thick.

13.  Go inside and drink beer.  The paint isn't drying fast.  Drink alot of beer, the cure time is forever.

14.  Check on the bags.  Curse, they are still tacky and one of the cats has found them and some are contaminated with hair, a bunch are sticking together, and some are completely missing.  Guzzle the rest of your beer and chuckle to yourself that the cat has little tiny sanbags stuck to it.

15.  Throw the smelly sticky batch in your toy army man room and work on something else.

16.  Two days later check on the little pieces of poop and curse.  THEY ARE STILL TACKING.

17.  Say screw it and dip them anyway.  The stain or dip will settle in the the fabric marks and give it a nice textured look.

18.  Curse, you brown stain has turned black since you last used it.  Someone has broken into your house and turned your brown dip black.

19.  Make a brown wash with some cheap craft paint.  You've invested too much time and money into this project and should have bought some on the internet.

20.  Come back a day or two later and realize they really aren't that tacky anymore.

22.  Curse, because they don't really mold to the terrain you're attaching them too and they're so small and fidgety you're getting covered in glue.

23.  Victory beer!  Sure you only attached half of the ones you wanted to but it looks good enough.

...or just do what a modeling vet told me to use later.  Use self drying modeling clay.  Screw Sculpey.

Here's a couple preview pics of the trench table.  First is some homemade barbed wire and second liquid in craters.  The lighting in my lair is poor. 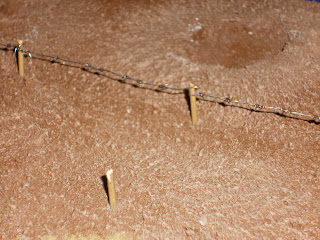 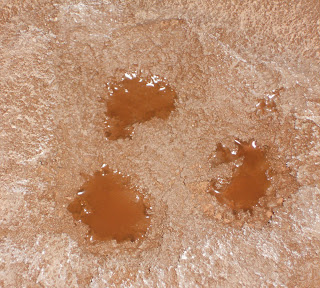 First post in 9 months.  I was out of the country and unable to play with my toys, but now that I'm back I intend to play and post far more often.


I'd been saving my play money up for about six months and ordered the "Le Deal - French" from Warlord, and wanted to post a pic and ramble on about what a great deal it is.  For $173 (free shipping) I got four boxes of Perry French Line, 2 boxes Perry French Heavy Cavalry, 1 box Perry French Hussars, 1 box Perry French Dragoons, 1 box Victrix Old Guard Grenadiers, and a Victrix blister containing two mounted French officers and a Pioneer. 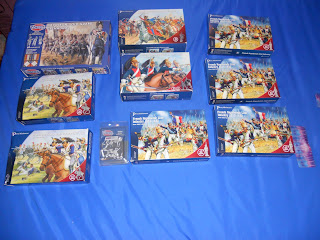 That totals up to 235 foot, 57 mounted, and twelve casualty miniatures for $173.  I can't think of a better deal anywhere.

Due to the fact I saved so much money I had extra cash to spend on some Prussians:  Two boxes of Perry Prussian Line and a box of Warlord Prussian Landwehr. 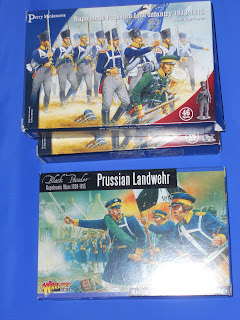 The Warlord minis have the most extensive packaging.  Sprues are wrapped in plastic and separated by card board.  Perry and Victrix just toss the mini sprues in the box.


In the Landwehr box, you get thirty models:  three metal and 27 plastic.  The plastics consist of nine sprues with only three poses.  There are two swords for every three men, the third has a little ax on his belt.  I didn't know the Landwehr actually had blades. 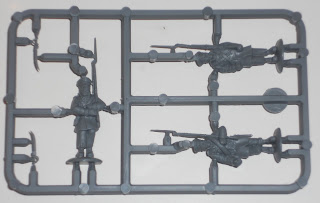 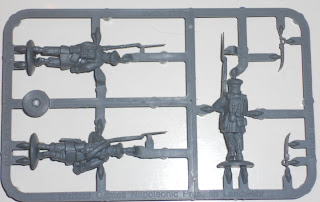 Here's the three metal minis that come in the box: 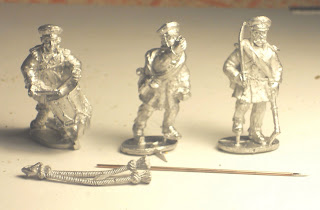 I also made an order from the Perry Brother, due to the fact that Warlord doesn't carry Perry metals.  The French needed cannon, so I picked up three line artillery six pounder sets.  This was the first crew painted. 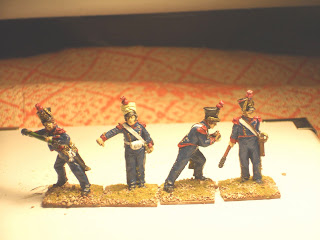 I saw that the Perry's sell a Fusilier conversion kit for the Musketeer boxes and picked one of those up.  It includes four command figures and different backpacks.  The only real differences I saw was that they had straight blades instead of curved.  Two Prussian boxes and the conversion kit allow you to actually create four Black Powder size units.  96 models total:  one small unit of twelve Jagers and three regular units 28 musketeers.


I also picked up one Perry Prussian six pounder piece to see how they compared to my Old Glory Prussian Artillery.  The Perry models are definitely better sculpts and a little bit taller; the OG model is on the far right; you can't tell the Perry models are taller in this picture, but I swear they are. 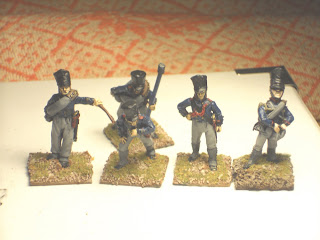 The Dragoons come with thirteen mounted models and eight dismounted models.  You can't dismount the whole unit.  So I picked up three of the two miniature dismounted sprues so I could dismount the whole unit.  13 minis will make a small unit of skirmishers in Black Powder.  Luckily the mounted sprues come with extra chests for the leadership.  I'll simply cut some of the models in half and put the leadership chests on lowly enlisted legs.  Here's the six I've painted already. 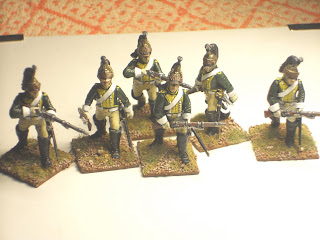 Delivery wise the Perry Package made it all the way to Washington State in less than two weeks.  The Warlord delivery took 32 days, but they were kind enough to email me we the order had been processed and mailed.  The Perry Brothers robot doesn't even email you a receipt for your purchase.