The Great War should have been called the Absolutely Miserable War or the Horrible War. Regardless of adjectives used, it has inspired me to make a trench warfare table top.
It's based more on the German design than the French or British design. During internet research, it appeared that the poor saps digging the hole didn't always follow the pretty diagrams drawn behind desks, far behind enemy lines.
The pieces are somewhat modular so the number of trenches can be added to or deleted as I make more pieces. Right now it's 4' x 6' and the craters aren't complete. There are different size craters dug into the board and the lips were created using different techniques. Some lips are spackle, some are styrofoam crumbles and some were created with foam triangles glued around the crater. The latter will require the most building up for realism, unless the spackle doesn't stick to the board. 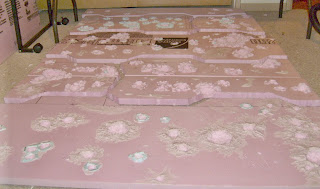 There's a front line trench, a support trench, two reserve trenches and some space for short range artillery emplacements.
I've also added a few slight terrain raises and depressions so it doesn't look like a bombed out parking lot.
Things I will be adding with pictures to follow will be:
Shoring/shielding
covered passages
sandbags
pill box
pallet flooring
possibly dug outs
barbed wire
latrine
Posted by Baconfat at 11:04 AM