Hi,
If you like poorly worded after action reports and mediocre photography, this post is for you.
Weekend before last I managed to get in a fun game of Black Powder.  It was designed to resemble part of Salamanca.  About 60% of the French brigades started on the table edge with reinforcements coming on later turns.
The British were prepared in line along the road and small village.

The French Dragoons charge some Rifles on the left destroying them.  The French center suffers a little artillery casualties.  Some of them manage to take cover from the artillery behind the trees.  The French right cheesely skirts the right table edge, to avoid fire coming from village; their plan is to round the village and attack the Brits from the side or rear, negating their numerical advantage.

The French Dragoons on the right have been destroy by British Hussars (which quickly got disordered the rest of the game) and the Brits have moved forward and both sides damage each other with brutal musket fire.  The French center doesn't really do anything.  The French right moves slow down as the Brit Guards swing around to prevent the French from rolling up the line. 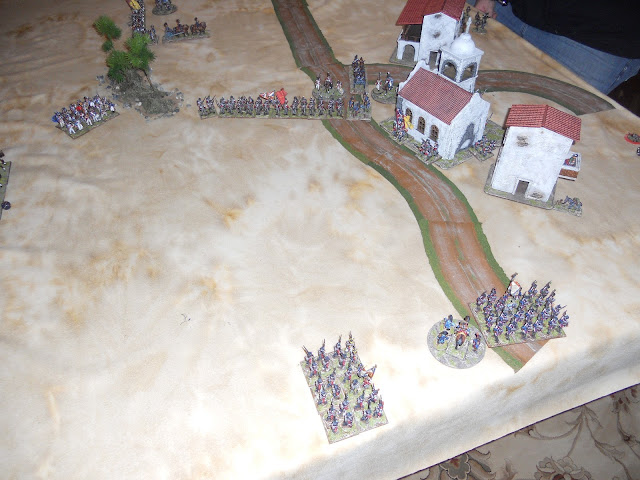 Close up the French right, crap a cannon is coming.  And the Brits are hiding in the buildings as well.  If you look in the back of the photo, you can see a Brit rifle unit that failed orders the whole game.

French reinforcements flood the field, the left have Hussars.  The original center units have moved to avoid the Brit horde advancing.  The left acquired a unit of Cuirassiers and another cannon. 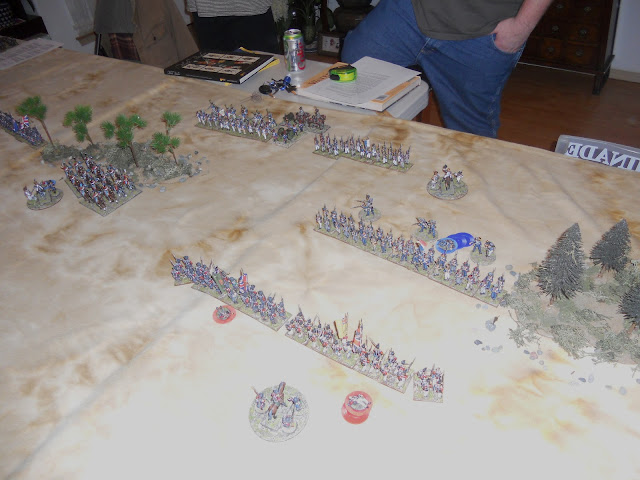 The French left taken from the Brit perspective.  The French Hussars rolled ridiculous order goodness, moved through the woods, charged the disordered Brit Cav and destroyed them.  The opposing line troops stand and bravely massacre each other with muskets. 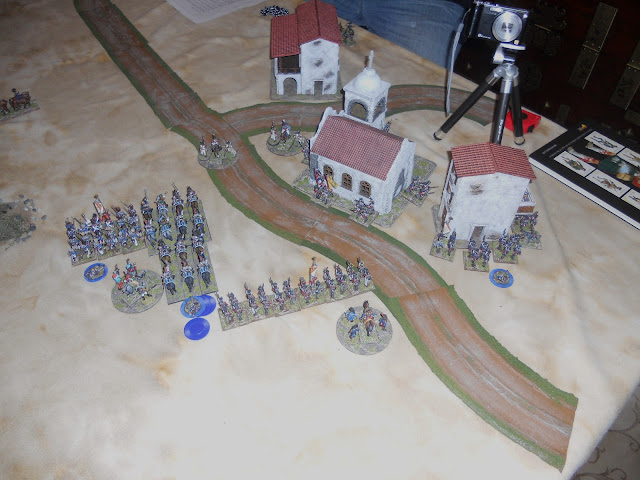 On the right the French roll incredibly well, move long distances, shoot well and melee well.  They wipe out the Coldstream guards and an artillery battery.  Another French unit occupies a building to negate the British in theirs.  I believe some barely involved Brits even run away, but not the static 95th Rifles solidly stood out of the action as they did the whole battle.

The battle didn't go as anyone planned and we guessed it was a narrow French Victory.  The Brits had one untouched Brigade, one almost wiped out, and another on the French left mostly shaken.

The French left Brigade was pretty beat up but would have probably finished off the Brit right shortly.  The French right owned alot of Brit real estate and I'd guess the combined French could have encircled the remaining Brits and possibly won if we had fought to a silly bloody last stand.

Black Powders' most endearing quality might be the unpredictability compared to I go, you go rules.  Also is the simple order system and movement of units, not requiring any complicated Algebra or compass.

Baconfat
Posted by Baconfat at 7:36 PM