Today I have quite a few pics for you, even though I didn't get many models painted.

First are a couple old out of production Citadel Thudd Guns.   GW's Forgeworld makes a much nicer resin version of the Thudd Gun.

Here are some Space Marines painted up as Space Sharks.  I believe the official name of the chapter is now Carcharodons, but that's much harder to say.   I think all the models came from the box set of the 40K game, before the current edition.
Here they all are standing in scenery.

As promised I did paint a Burgundian.  He's an old Grenadier model, of which I have quite a few.  Sadly he's the only one with a jacket to paint like a Burgundian.  He matches up quite well with the plastic Perry mercenaries. 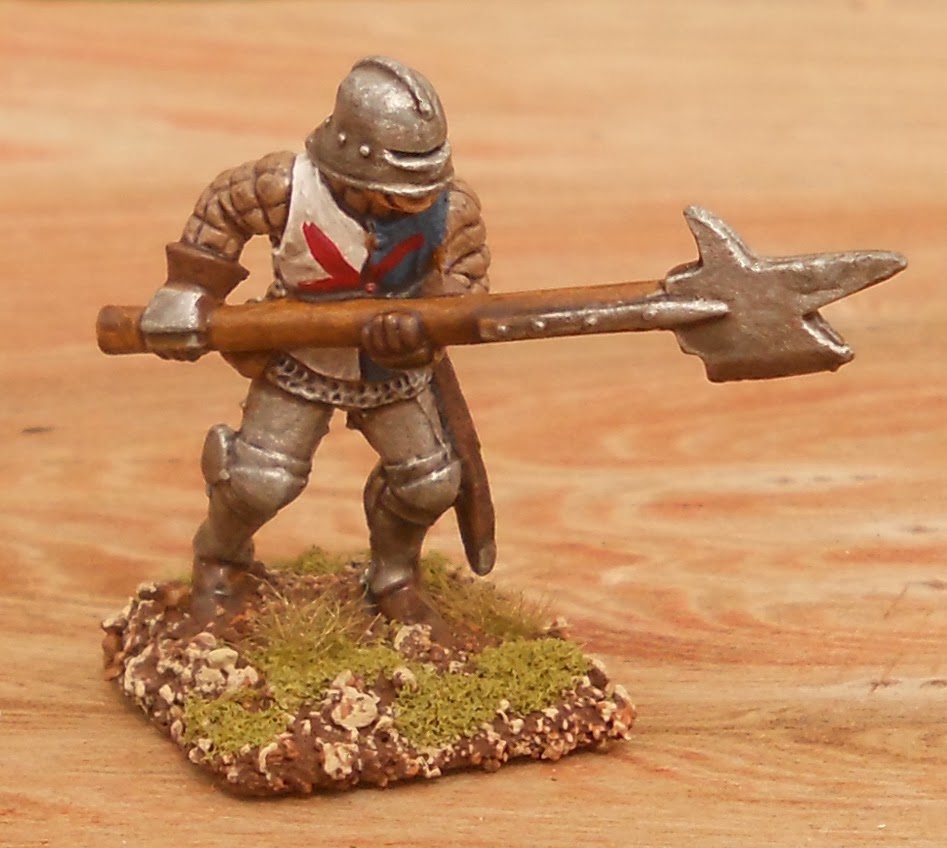 Now for the Rogue Trader stuff.

A few years ago, I traded a famous wargamer named Bad Dawg for a bunch of old Rogue Trader minis, to supplement my Rogue Trader armies.   Bad Dawg is a prolific writer and reviewer of wargames and scenarios.  He's most recently noted for running the Baddawg's Landing Yahoo group.  Sadly, I haven't heard from him in quite awhile and I fear for the worst.  Hopefully, he just changed his email address.

Bad Dawg had coated all of the minis in a glossy varnish or something.  It was incredibly tough, protecting the models through 30 years of constant warfare, almost no chips.  It also seems to repel dust.  The problem is that it really detracted from his cool paint jobs.

Here's an example of the gloss look.  Aerosol matte spray does nothing to it.

I wanted these models to see more action, but I wasn't going to send them into battle glossy again.  The camouflage doesn't serve a purpose if it's glossy.  So a bottle and a half of Vallejo Matte Varnish later, 39 of the marines and 91 of the guardsmen are far less glossy.

Here's the first of the Hell's Angels space marines, that will go on a Xeno killing crusade with my Space Sharks:  four missile launchers.  Though the really look alot more like rocket launchers.

A bunch of regular marines with bolters.  If you look closely there's another power fist in there that missed his earlier photo oppurtunity.

There are many many Imperial Guardsmen.  Below is maybe 60% of them.

Six riflemen.  The second from the right appears to been modified with a Catachan head.  If you continue viewing you'll notice Bad Dawg really enjoyed modifying these troops to give them special character.

Five more riflemen.  The second from left has another head modification.

Plasma gun, melta gun, two flamers, and a grenade launcher.  The two on the right are heavily modified.  The second from the right may have a space marine scout head.

Next up are members of the 69th Dunroamin' Regiment of Light Infantry.

Rifles, the two on the far right have cigars added to their mouths.

The second trooper from the right has some helmet and rifle green stuff additions.

The second trooper from the right was a pirate, but now is a guardsman, due to a clever head swap

Private Sharps from the above pic has a robot arm and leg.  I think he's quite rare; I don't recognize the head. 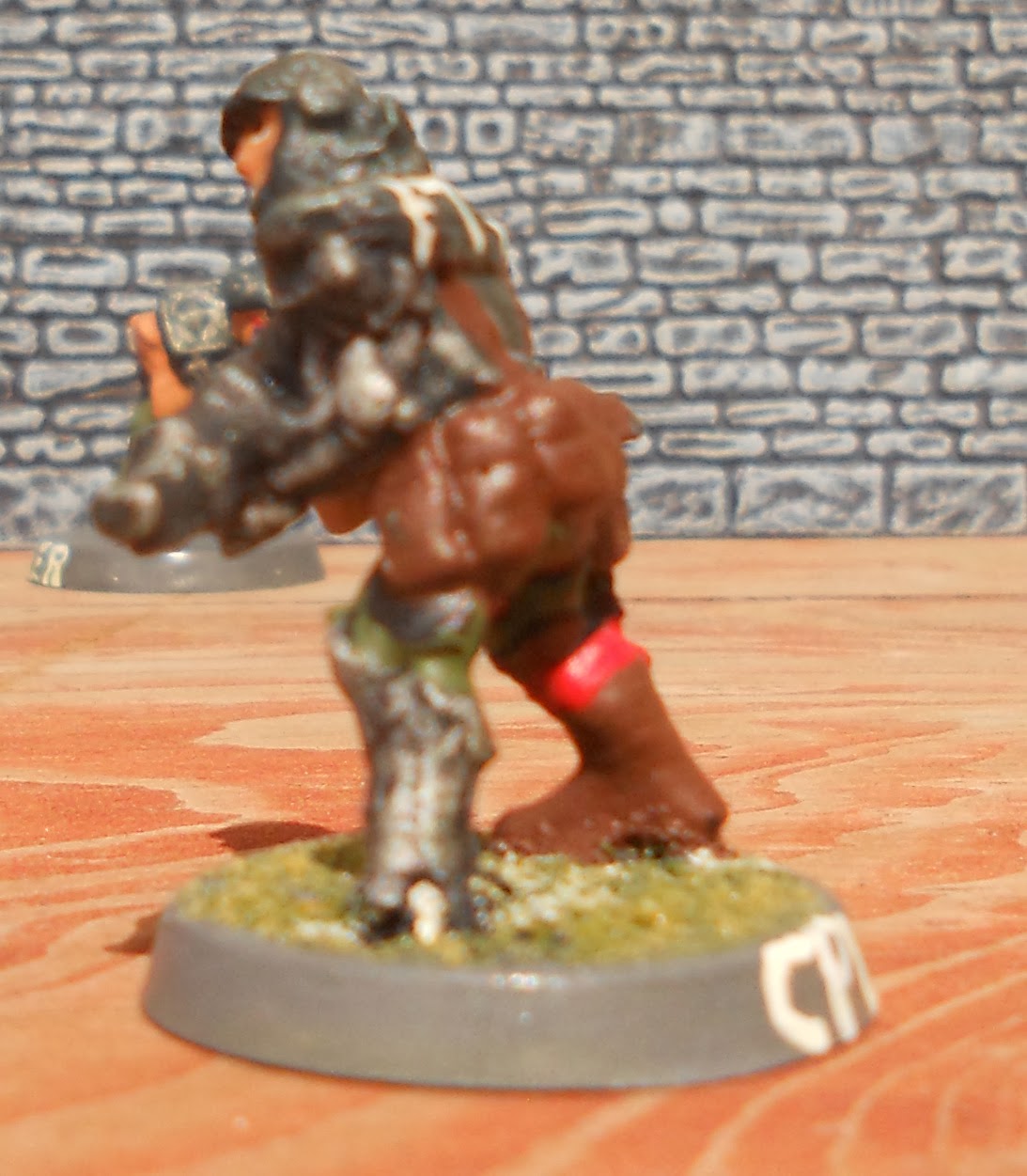 The three on the left are the later models with metal bodies and plastic arms.  The far right model, named Private Rambo is another model I don't ever remember ever seeing before.

Four plasma guns; the two on the right are kit bashed with what I believe are marine plasma guns.

Here are three officers.  They're mostly made out of Commissar and Space marine scout bodies and heads.

Here are three more heavily modified and green stuffed officers;  the guy on the right is sergeant made out of a standard bearer body and space marine arms/head.

Here's three more sergeants made out of standard bearers, next to the sergeant from above.

Here is a guy with too much green stuff and really tough looking trooper with a space marine scout head. 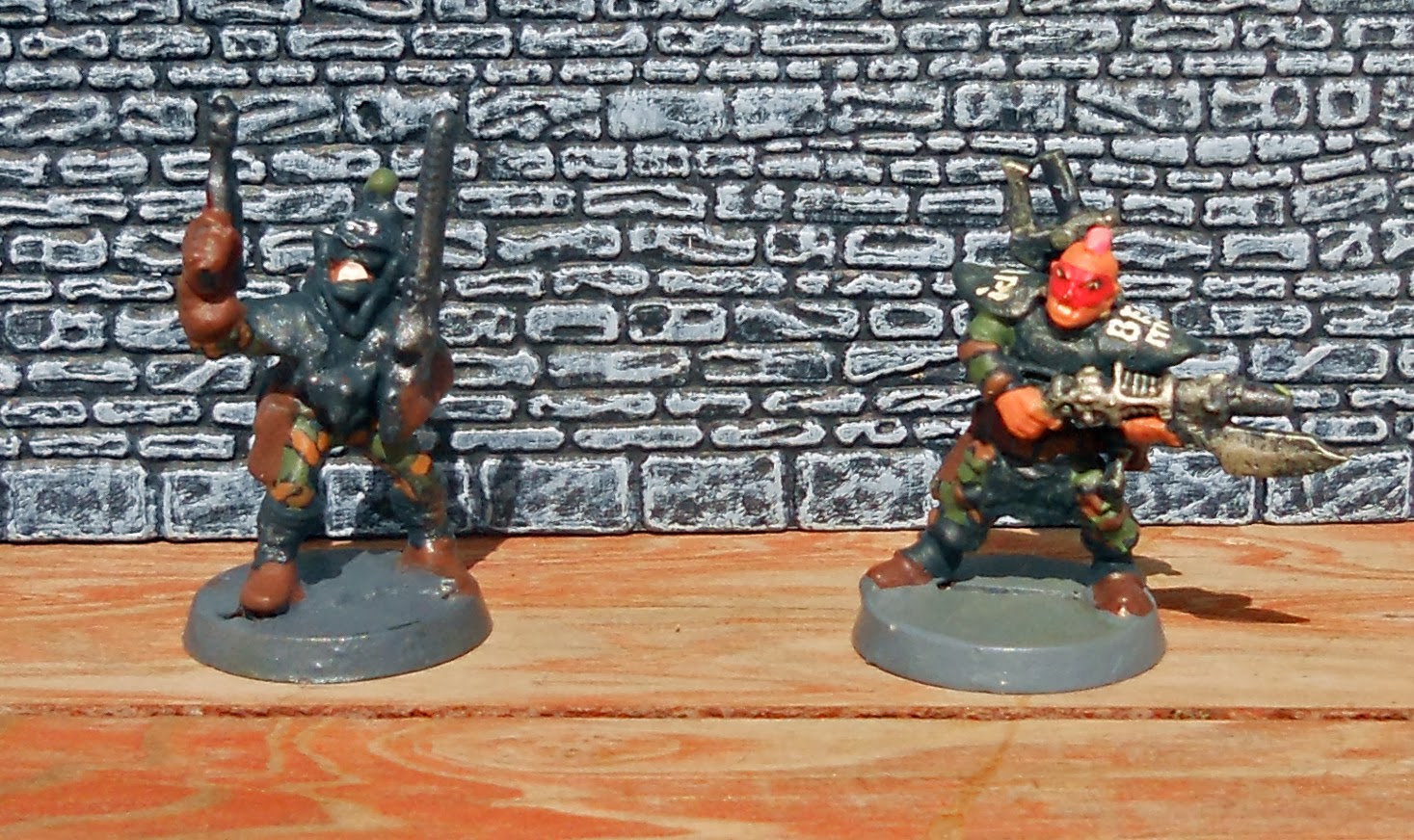 You can see from the rear view, that Bad Dawg used a clever mix of backpack and pins to turn them into vox operators.

Four more sergeants; the one on the right is an officer body with standard bearer head.

Four flamers,  the weapons are from the original plastic space marines.

I asked Ron (Bad Dawg) if he had a history on these troops.  These guys have been in quite a few battles.  Here's what he said:


the original core troops were formed the unfortunate 69th DUNROAMIN REGIMENT OF LIGHT INFANTRY.  they saw service against the ORKS, ELDAR,  assorted motley human scum, and GENESTEALERS as ship's troops assigned to FLEET patrol ships.  during this time the unit had its fair share of both good and bad  missions with most being "good". i can detail one of the bad times as i am adapting it to use THW CR3 or 5150 kirmish rules for a bud.


a. it was on a mudball called  SMITH that a patrol ship responding to an unknown distress call made contact with purestrain GENESTEALERS for the very first time. this was an eye-opening dance that saw the over-confident DRLI troopers get their collective butts kicked into low lunar orbit by the GENESTEALERS ("BUGS! BUGS, MR CUSTER! BA-ZILLIONS OF THEM!").


b. this game was almost a scene by scene replay of the movie ALIENS;  arrive at an abandoned mining colony on a backwater world. no one around to answer the big WTFO question for the emergency signal, but, lots of  evidence of a battle involving small arms and explosives. strangely enough there were _no_bodies of either colonists or the attackers.


c. while the troops were checking the colony structures, both VTOL landing boat crews  and the LZ security  squad (5 DRLI  bods  plus 8 FLEET bods) were surprised and killed by GENESTEALERS (both landing boats were aground to conserve fuel) before they could even get off a call for help to the orbiting ship, or to warn the  DRLI troopers investigating the colony.


d. the next round occured when a fire team (5 bods) kicked open the door to a mom/pop store where sensors indicated "something not human" was lurking and surprised a foraging purestrain GENESTEALER.  this resulted in 1 mega dead GENESTEALER,  and lots of ammo expenditure for the DRLI.


e. platoon HQ section was hurrying to the location of the first contact fire team when  they blundered into 5 GENESTEALERS.  sensors barely gave off  the contact signal before around the corner they came! it was not pretty; LT, RTO, DOC were bowled, ripped apart by the BUGS, PLT SGT and surviving flamer trooper "retired" to a nearby bar/grill establishment for a last stand, leaving 2 dead and 3 angry  GENESTEALERS in the street.


f.  since LT CUSTER had thoughtfully spread his platoon out to do a "better search" of the colony and secure the LZ, the troops were all over the damned place when  they began making contact with the GENESTEALERS. this resulted in a series of uncoordinated fights. in some the DRLI held their own, in others they were simply over run by BUGS while the orbiting ship (semi bristling with shooty stuff; well a much shooty stuff as you would expect a colonial patrol cruiser to have!) listened to the combat chatter and screams but was not able to intervene.  contact with the platoon was lost shortly after the fight began.


g. a third landing boat was dispatched for a recon flyby of the colony and ascertained their were no surviving colonist or soldiers, but the place was swarming with purestrain GENESTEALERS.  after it docked with the orbiting ship,  the skipper nuked the colony (four times!) in an effort to stop the infestation, and left orbit. HQ was not going to be pleased when he reported the loss of two VTOL landing boats, 8 FLEET crew-members of same, 1 DRLI LT with family connections, and  44 experienced DRLI troopers to a GENESTEALER outbreak. . . .


h. an INQUISITOR went back with his ship and retinue  to check things out. he elected to land at the ruins of the colony to gather intel. he not only got intel, he and his surviving personnel were "kissed" by surviving  genestealers  . . . . and this was the start of a mini-campaign involving a GENESTEALER outbreak at the backwater FLEET base, and subsequently, the whole damned moon!  multiple linked battle scenarios, lots of fun had by all.