The Shadow, Hot Boiling Something, French Fusiliers, and Heart of Africa Action

Today's first miniature is from Reaper Miniatures.  Reaper calls him "The Black Mist", but he bears a striking resemblance to the Shadow.  Who knows what evil lurks in the hearts of men? 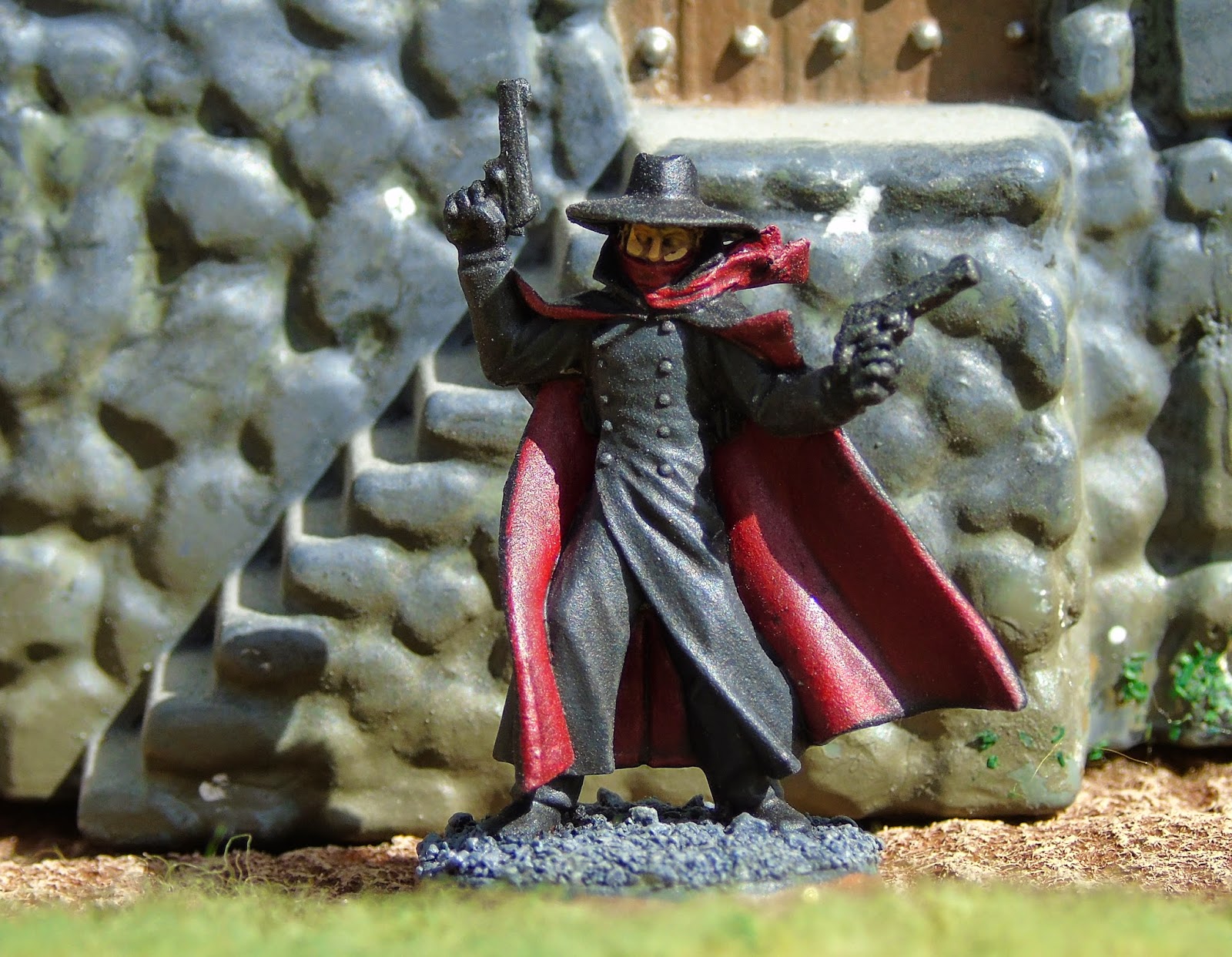 Here's a pot of boiling something for siege games.  I can't remember who made it. 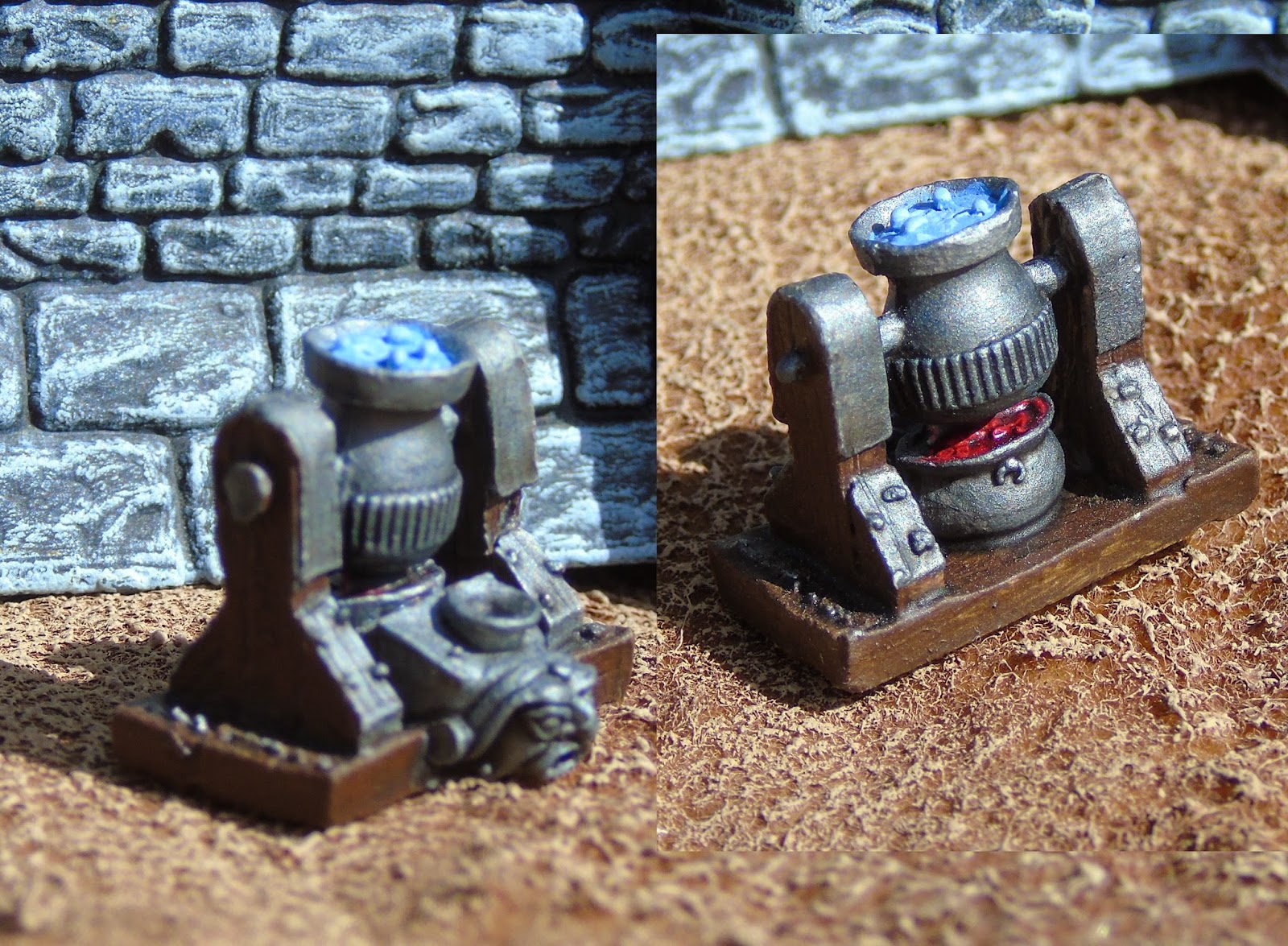 Here's a the pot with some guys on a fortress wall. 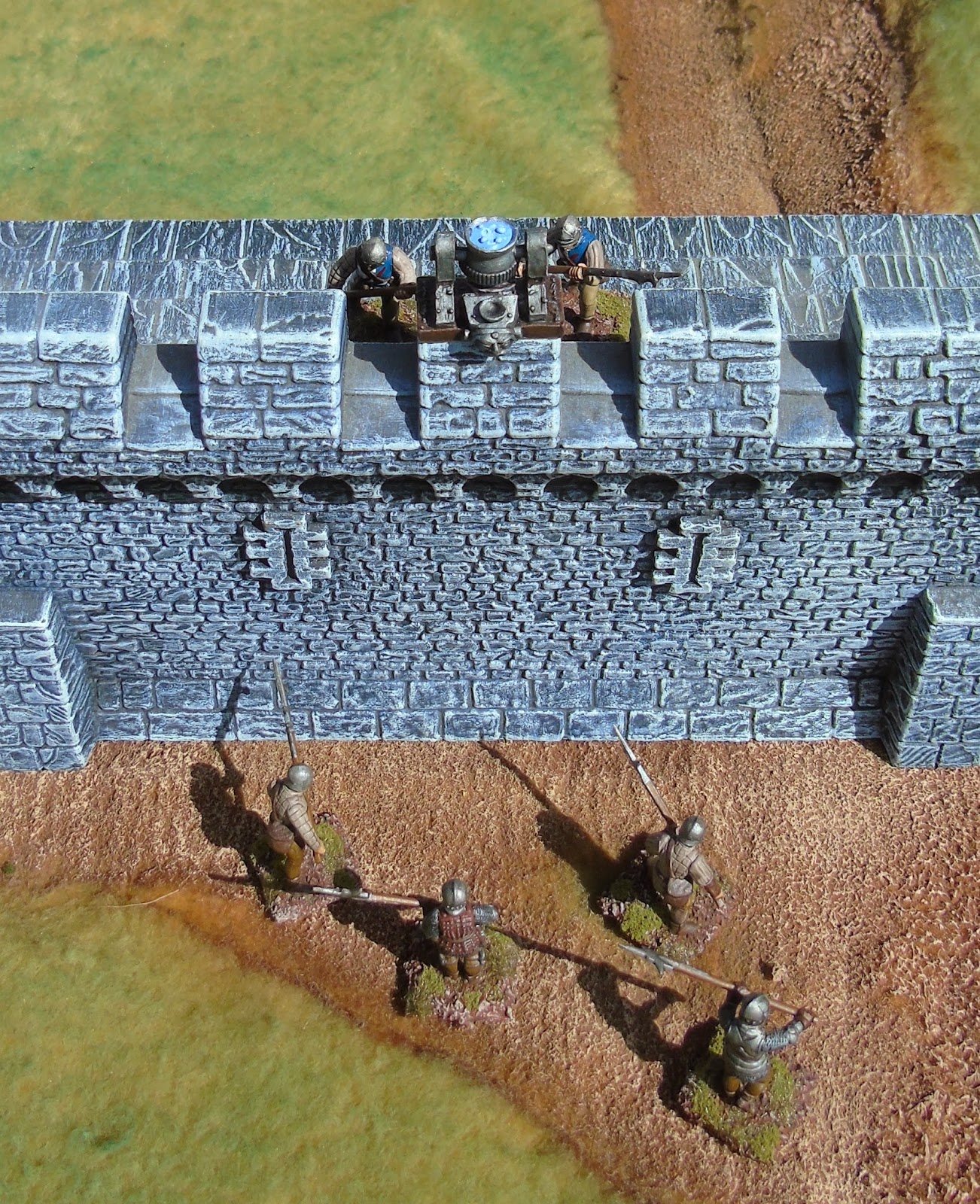 Here are eleven plastic Perry French fusiliers and a plastic officer.  I'm positive I paint my officer pom poms incorrectly, but I do it to tell them apart.

Here they are marching.  You can see ones missing a backpack.  This is a reoccurring problem for me.  I've learned my lesson, do not remove 200 plastic miniatures from the sprue, put the parts in a shoebox lid and leave the box in easy reach of a cat named Cthulhu.

You may have noticed, I only painted a single pose this time.  I don't think it's that noticeable when you paint them in a variety of colors and glue them to their bases at ever so slightly different angles. 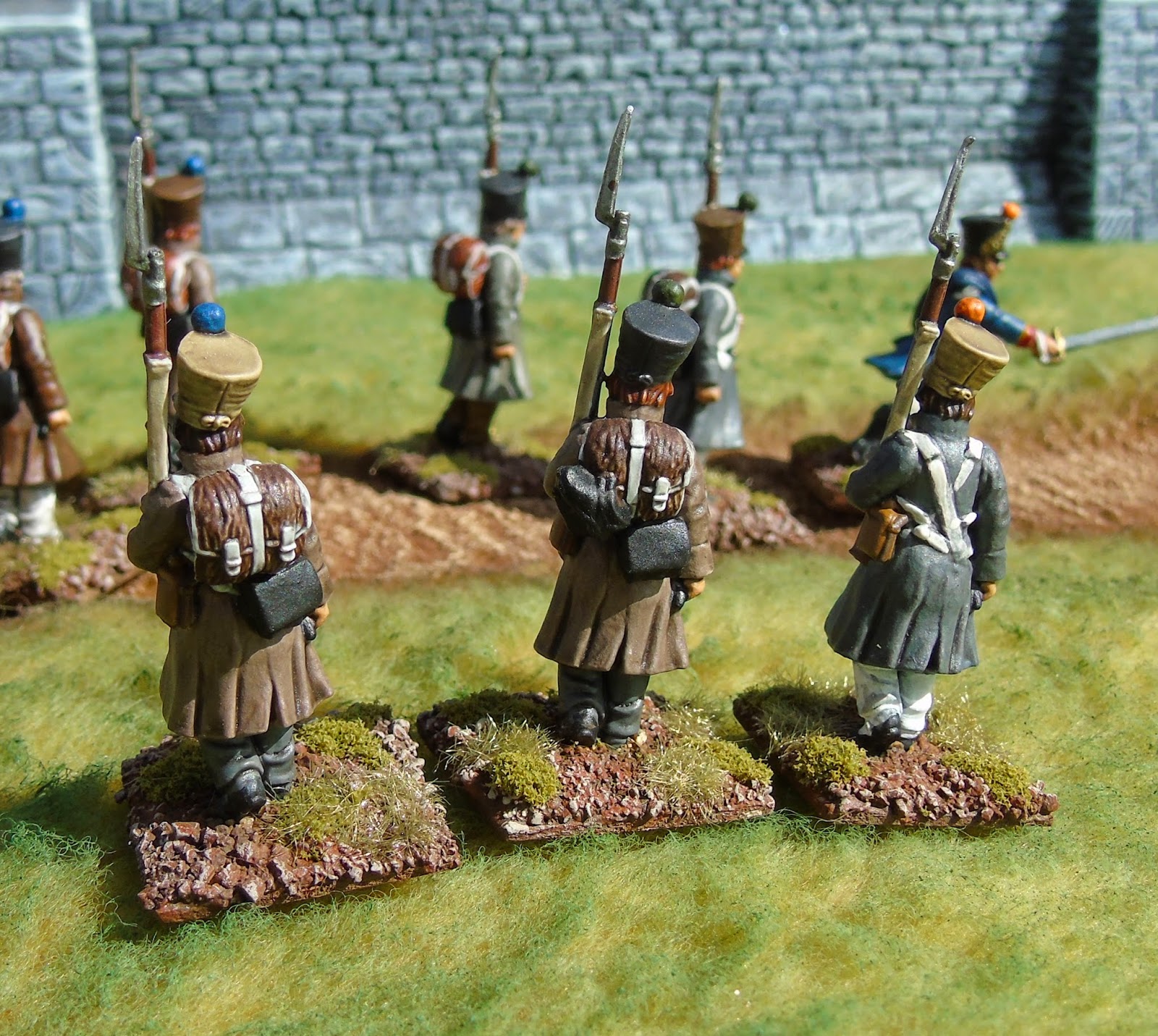 As the French march, let us move on to the action!  This was a play-test for a possible convention game by our most clever game master Dave.

It was a four way fight for an ancient relic, hidden in the jungle.  The four sides were natives, Arabs, German colonists, and British colonists.  The rules are simple, get your guys to the idol, find the relic, and carry the relic off the board.

Everyone starts equal distance from the objective; I have a frightful feeling this will not be a friendly affair. 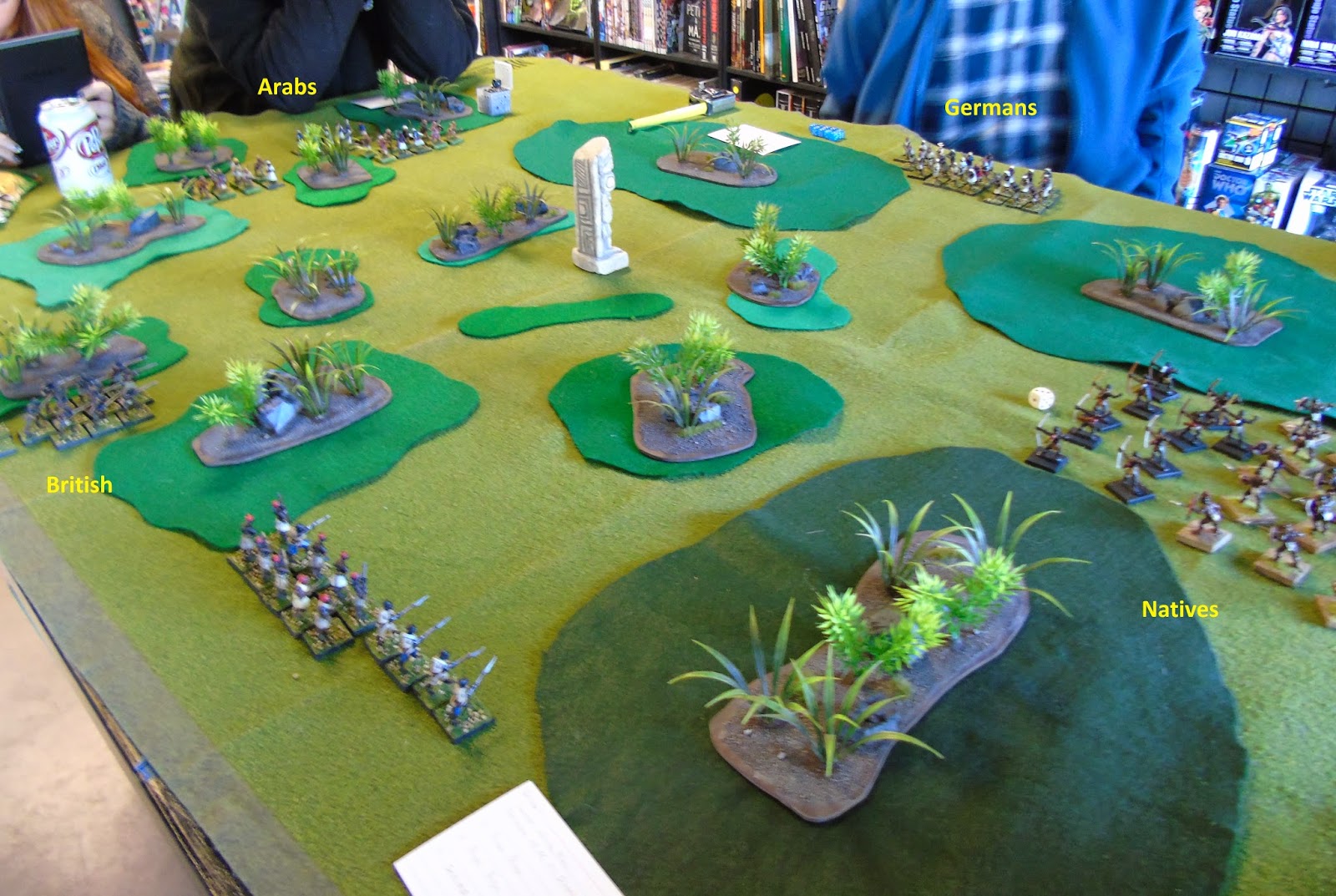 Ladies and Gentlemen, the Native!  Bowmen, vicious warriors, and a terrifying Chieftain. 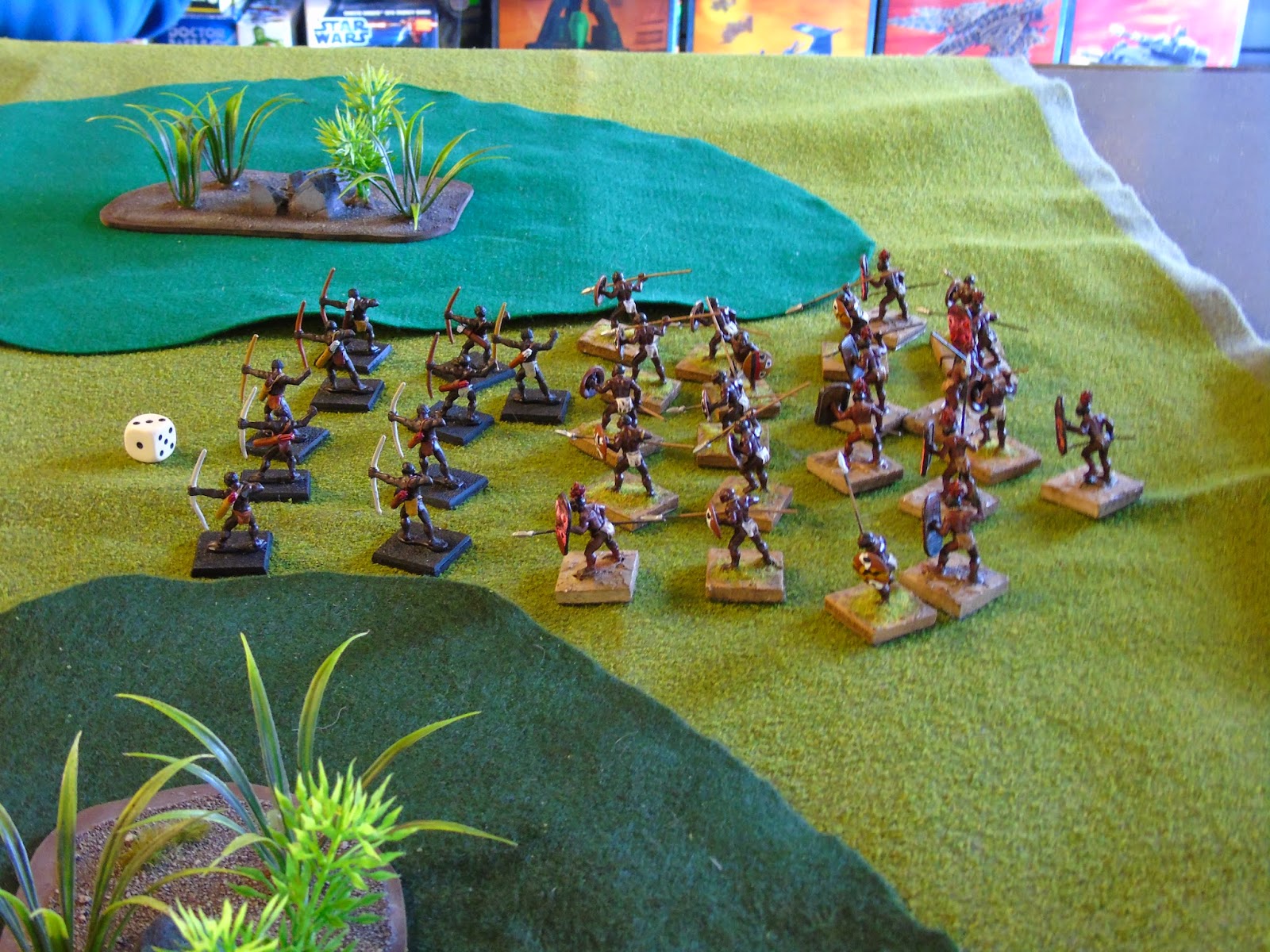 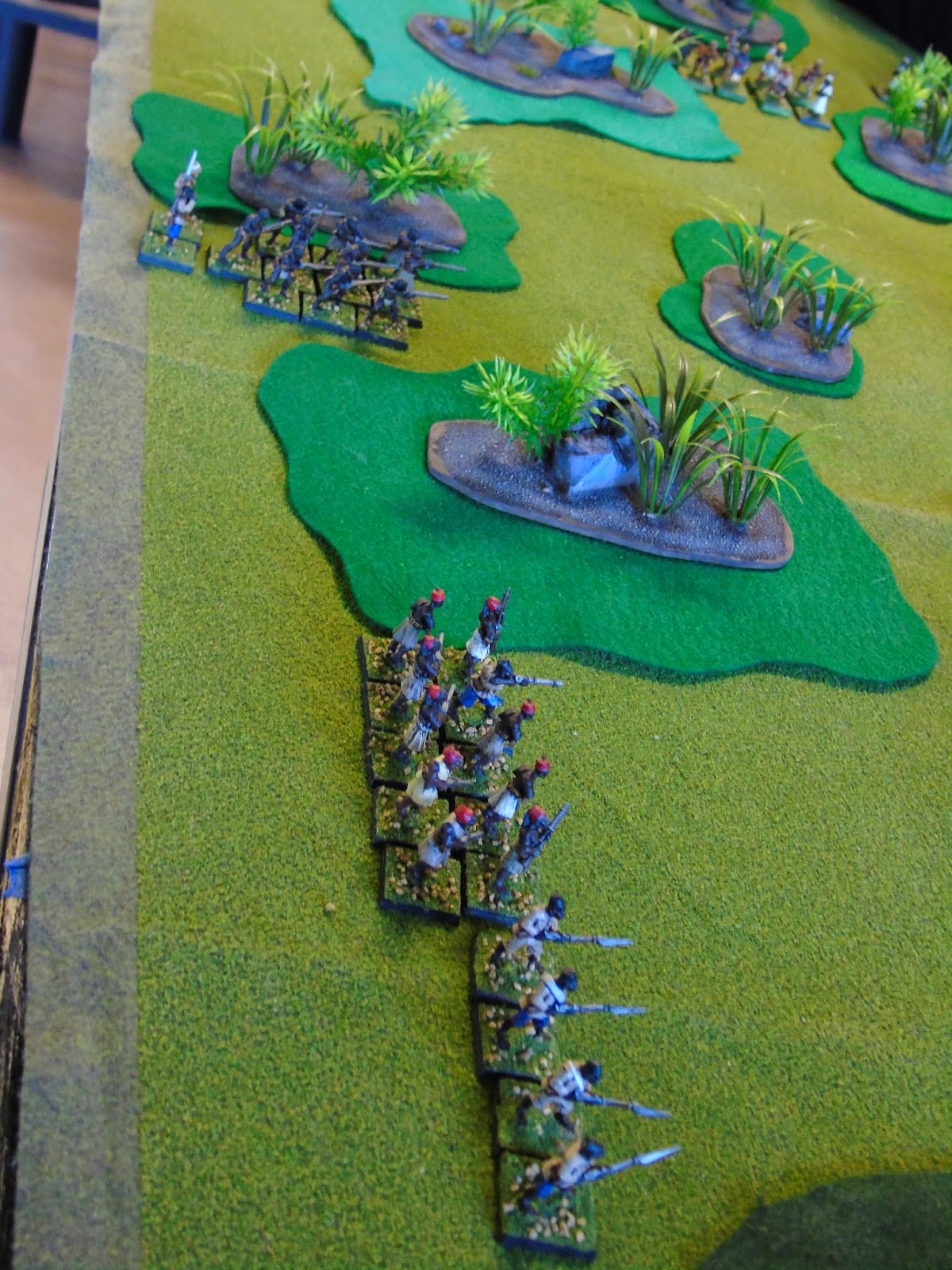 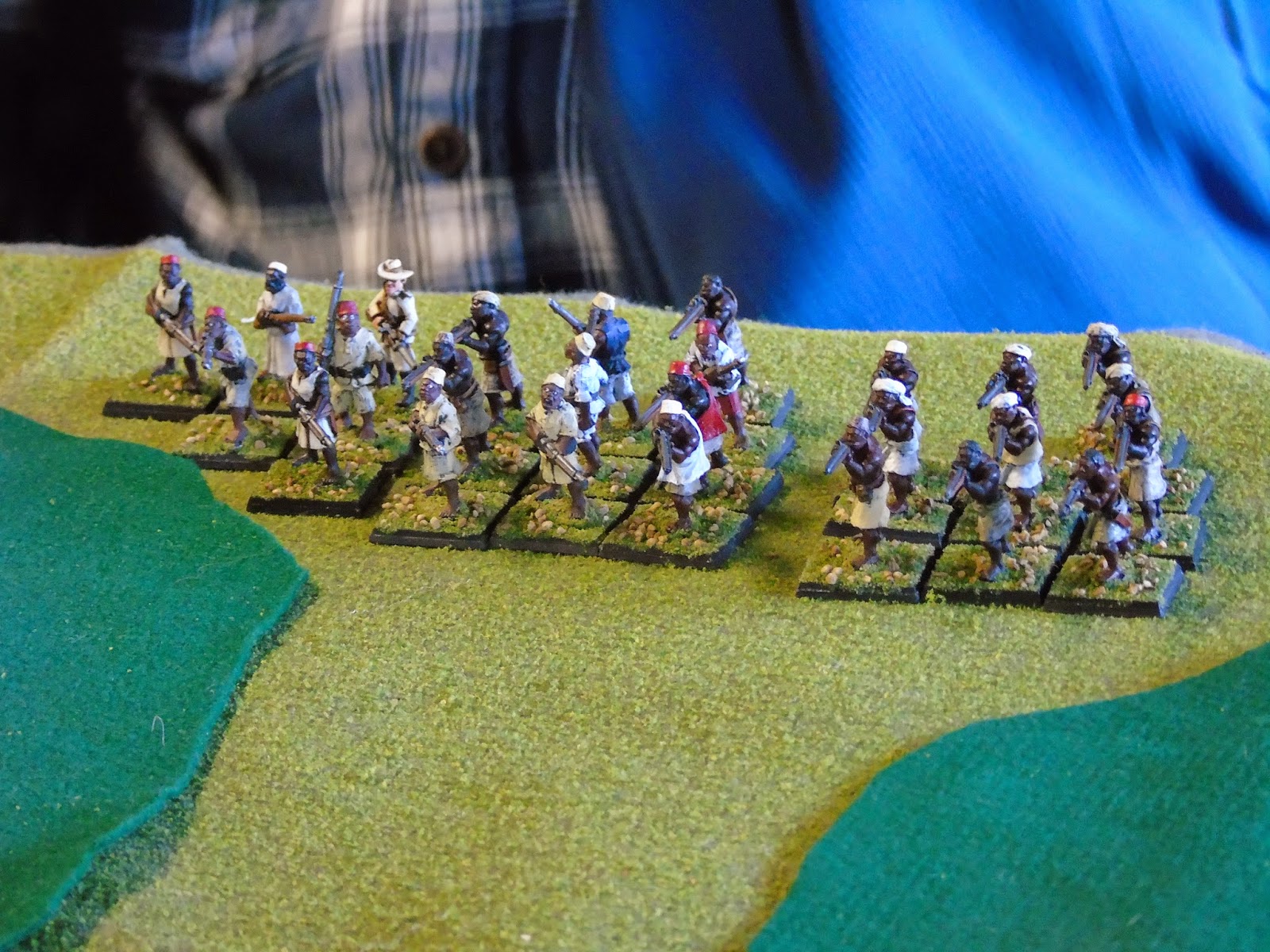 The Arabs, run by the evil mastermind of gaming, Steve. 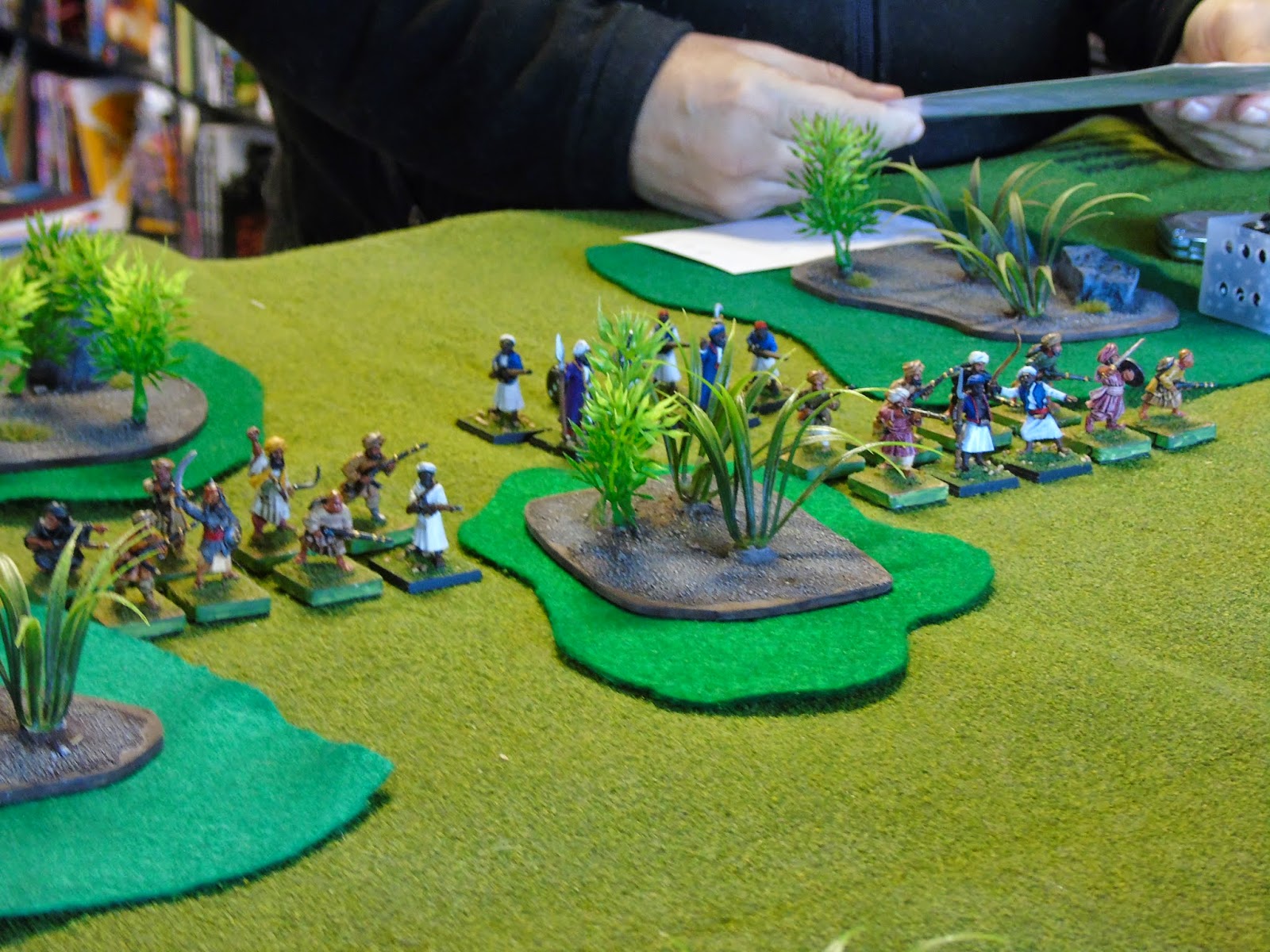 I happen to be the British and move my troops towards the idol, setting up firing lanes to cover my planned escape route with the sacred relic.  Everyone else decides to roll lower moves on their dice. 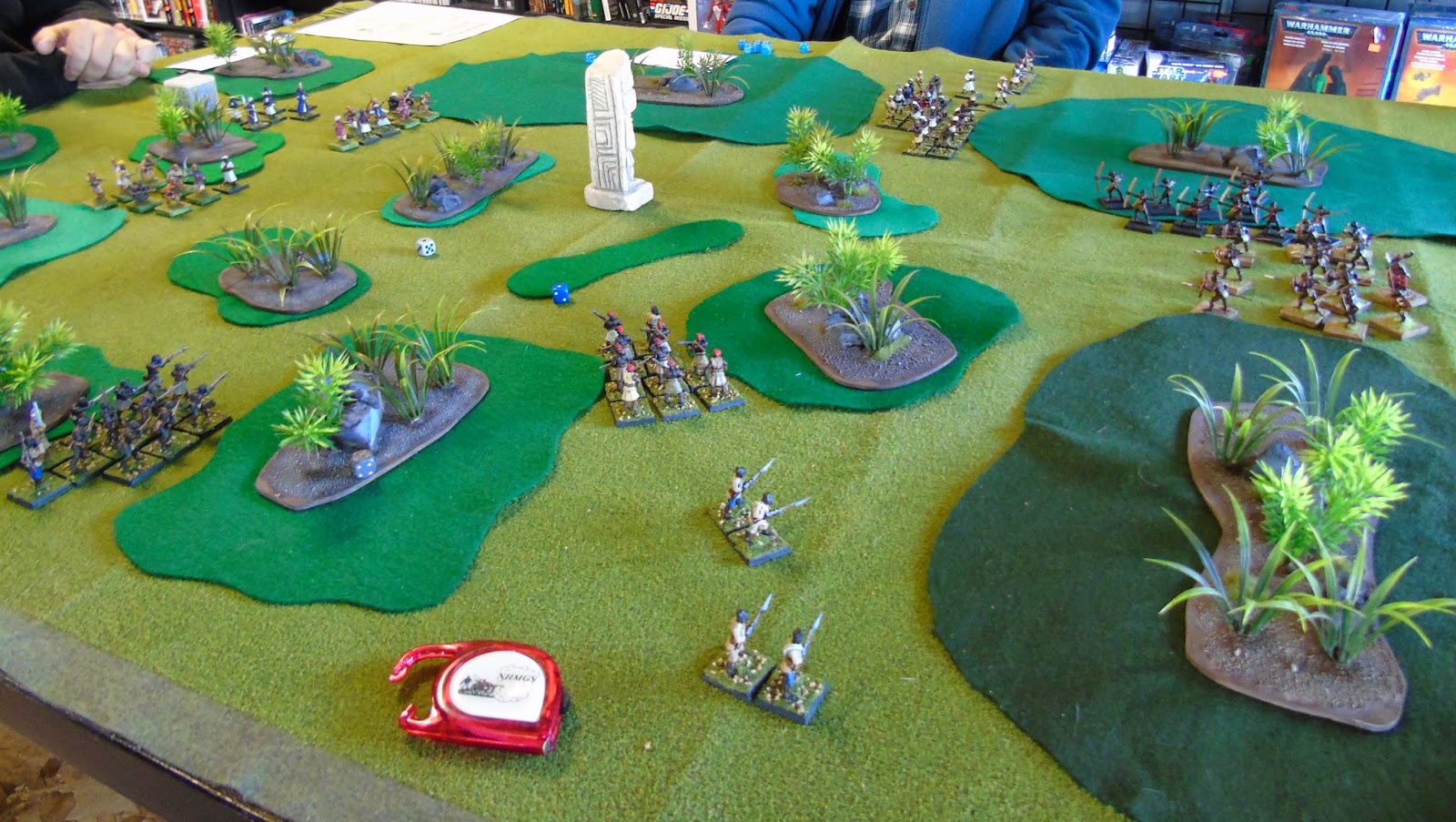 Another angle, what will happen?  This will be a bloodbath when we bump heads at the idol. 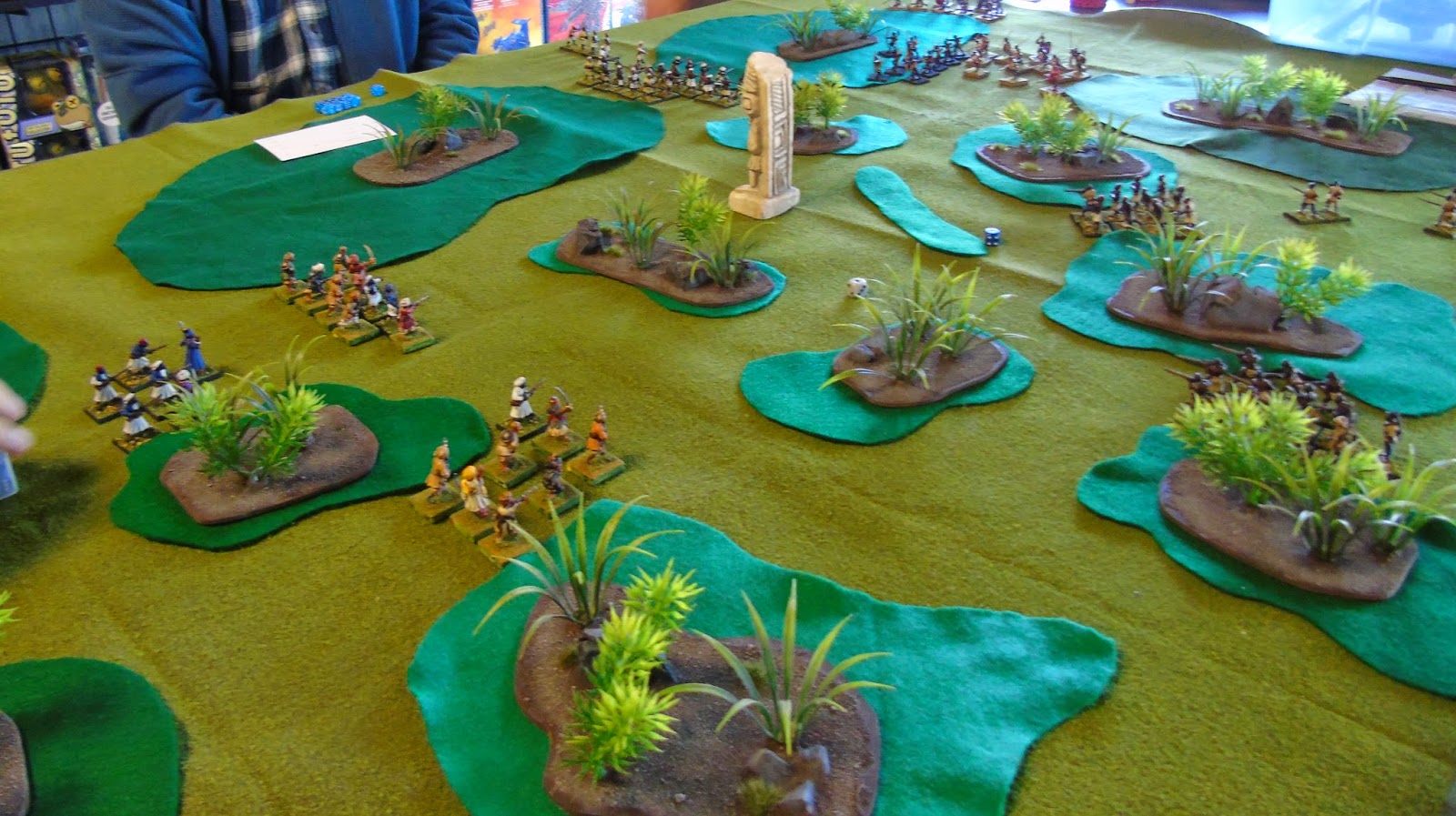 More valiant dice rolling by me and my troops continue to advance while leaving behind troops to take pot shots at all the villains, in the gaps between the dense felt foliage.  I don't appreciate the Steve getting his Arab swordsmen (with muskets) so close to my troops. 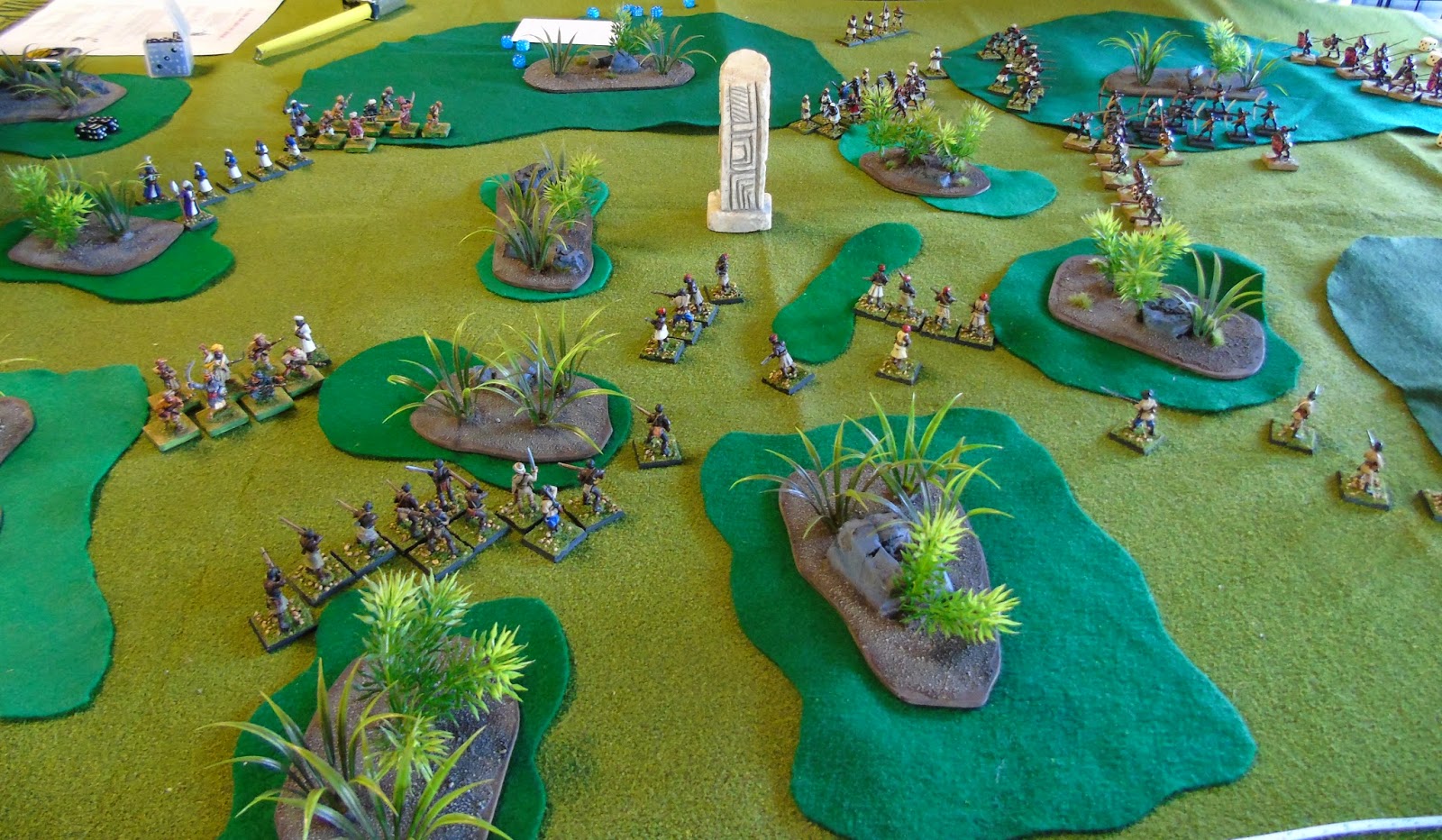 The Germans and Natives are the first to meet and it's brutal.  In an attempt to gain an advantage they have to become mired down in the jungle.

At last my favorite devoted trooper has made it to the idol is frantically searching for the relic.  Zee nasty Germans appear to have made it there as well. 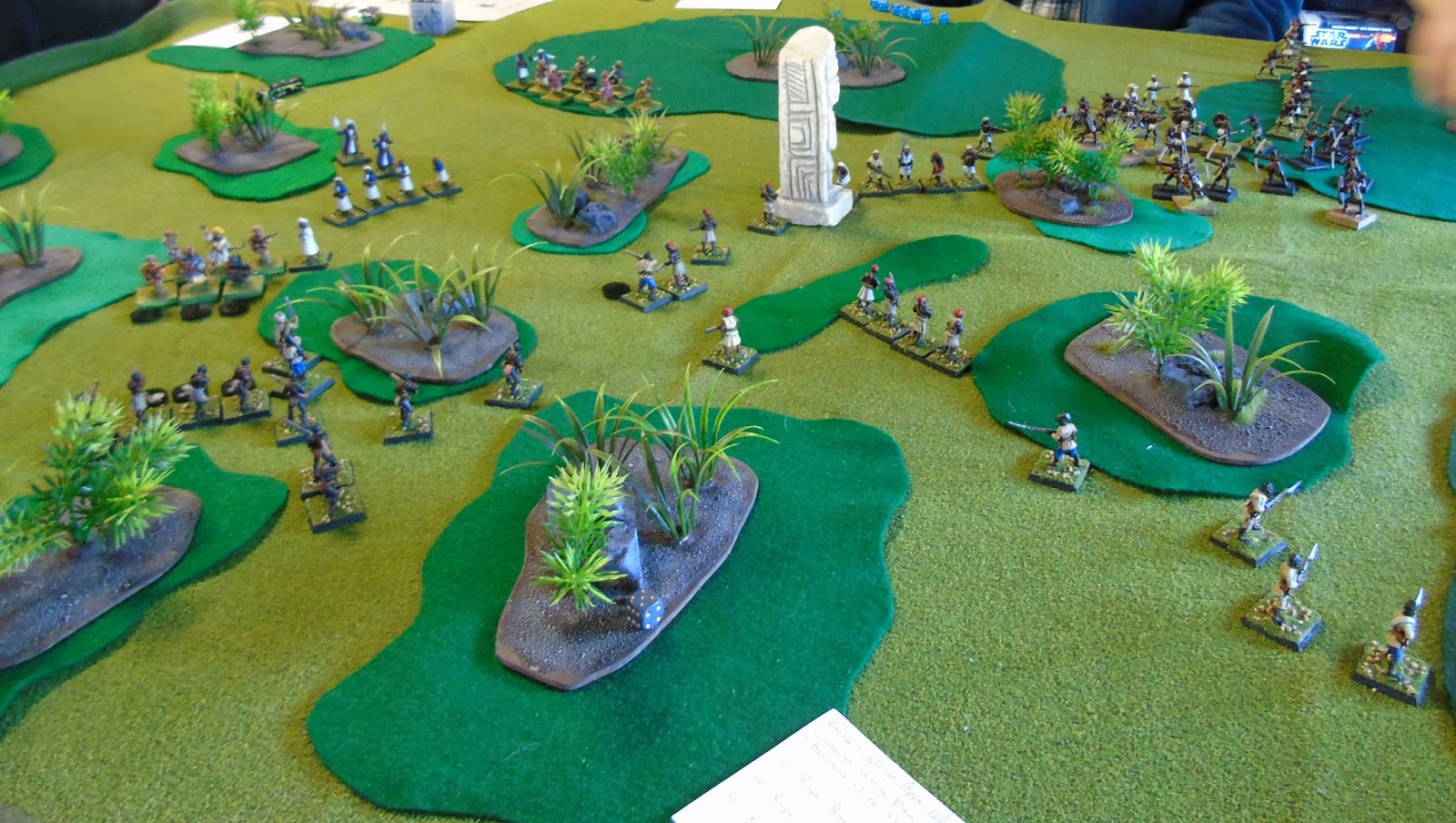 God, or at least the god of the idol has blessed us!  We have the relic.  The beautiful lights that shines from it almost makes it look like my Chosen Man is standing on a gold poker chip. 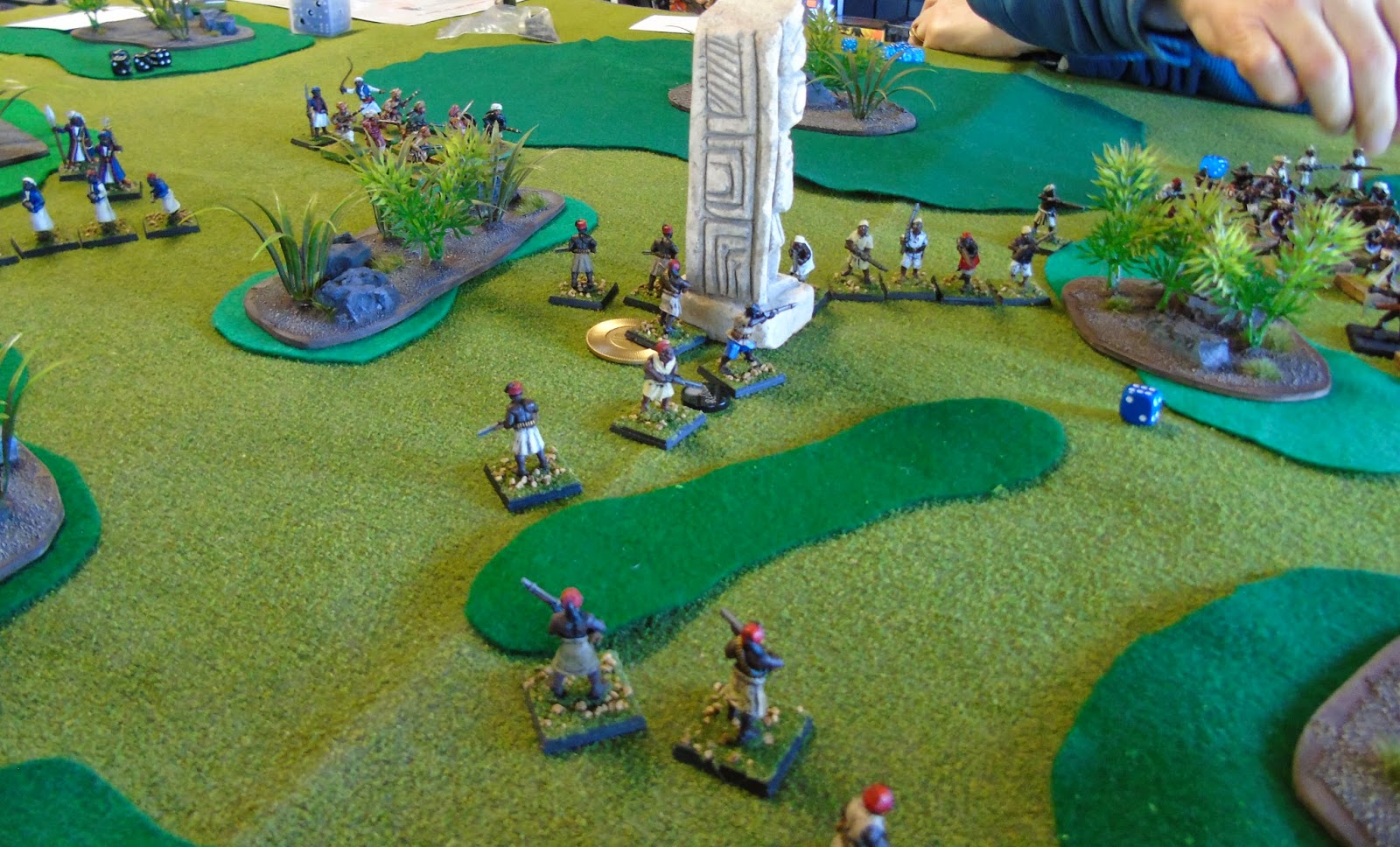 Emir Steve has started shooting and I have no choice but to return the favor. 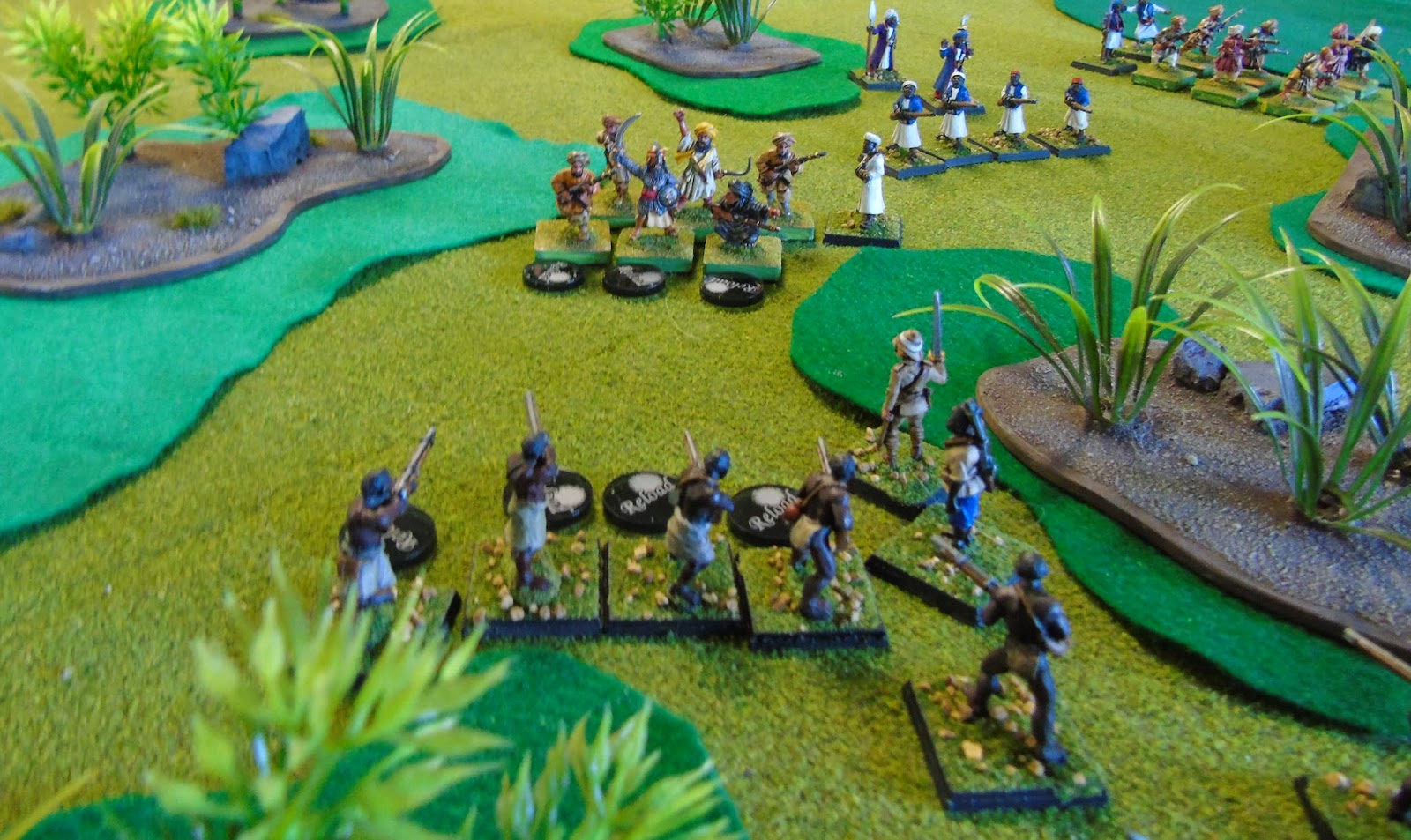 Ok, Imam Steve has dished out far more hot lead favors and I decide instead to slow him down with the human sandbag speed bump tactic.  Spread out boys!  Sacrifice yourself in Her Majesty's name! 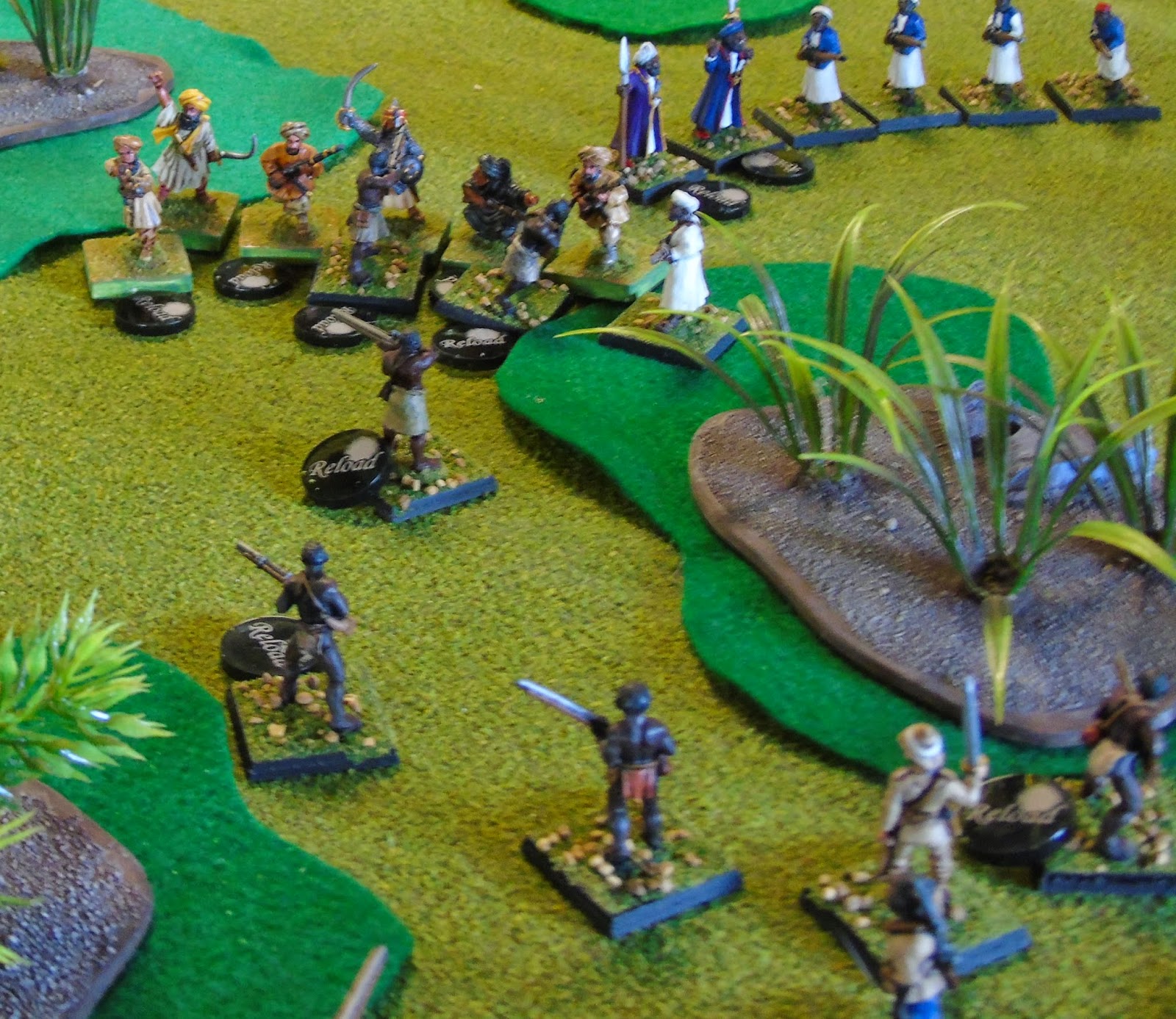 Why am I standing around, I'm so spreadout unit cohesion is becoming difficult. 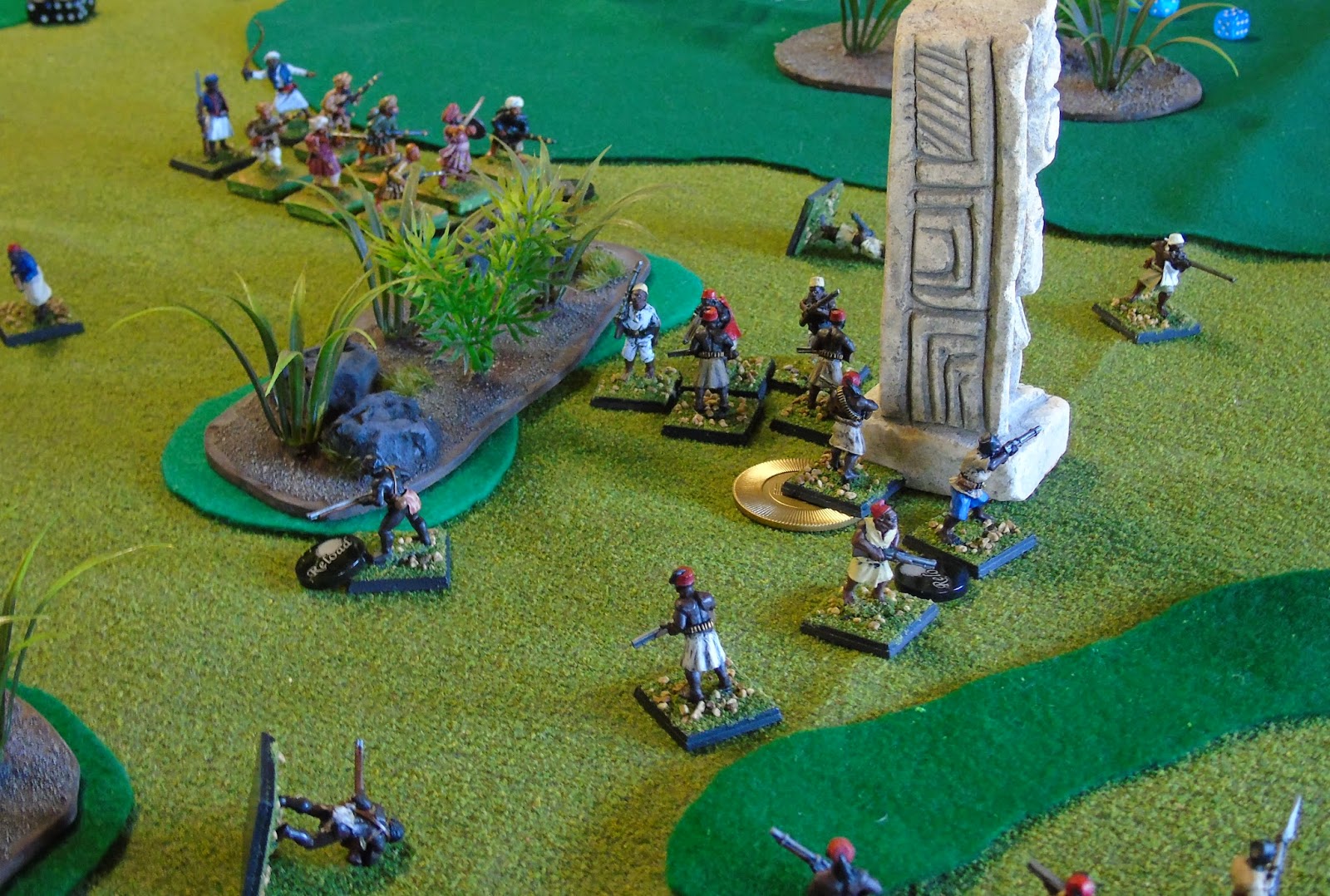 Finally, we're bravely running away with the prize.  Forming human sacrifice line to allow my man to make it off the table.  You can see the hands of the German and Native gods, telling their troops to quit squabbling and focus on the innocent British. 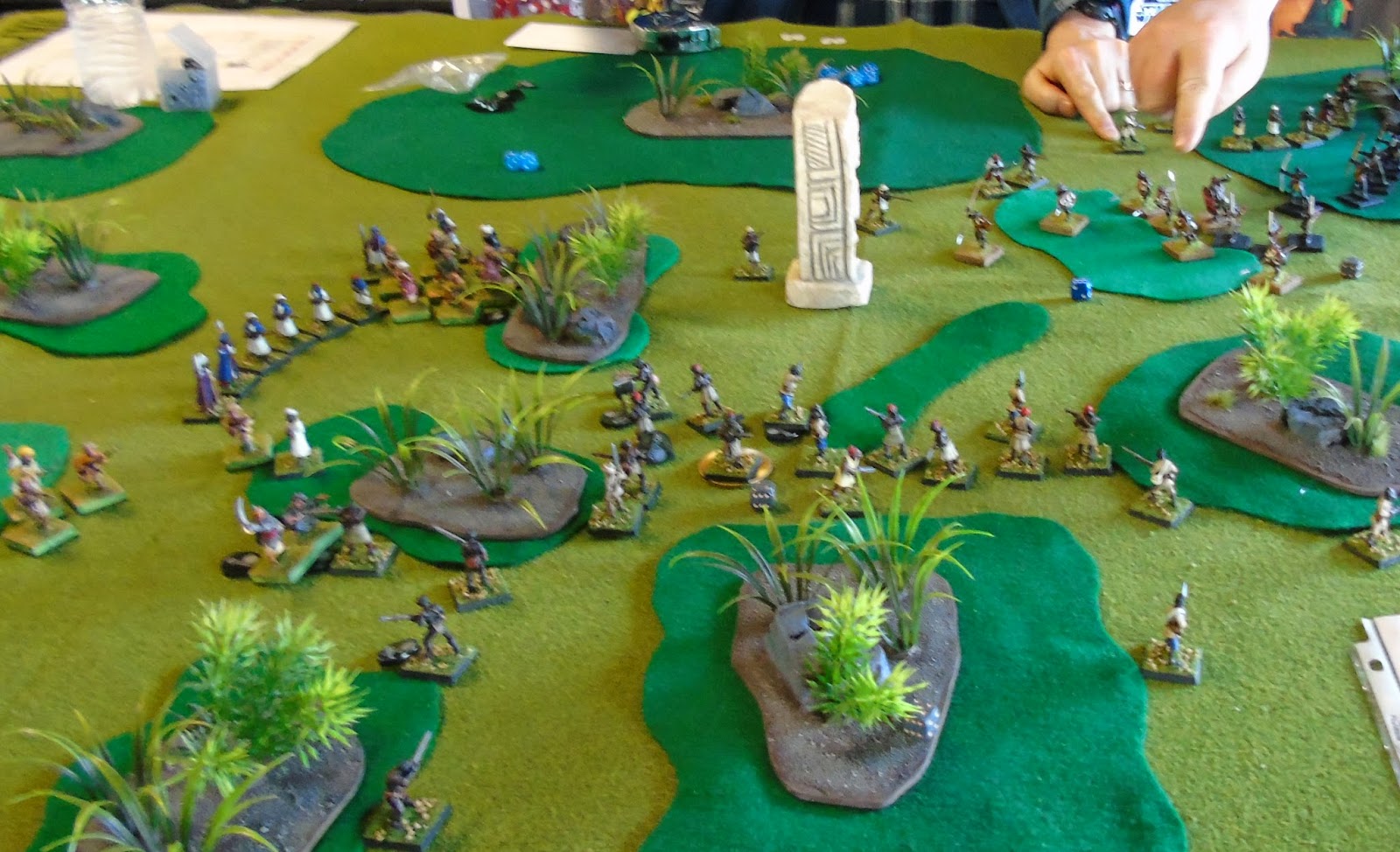 I'm starting to run out of sacrificial lambs. 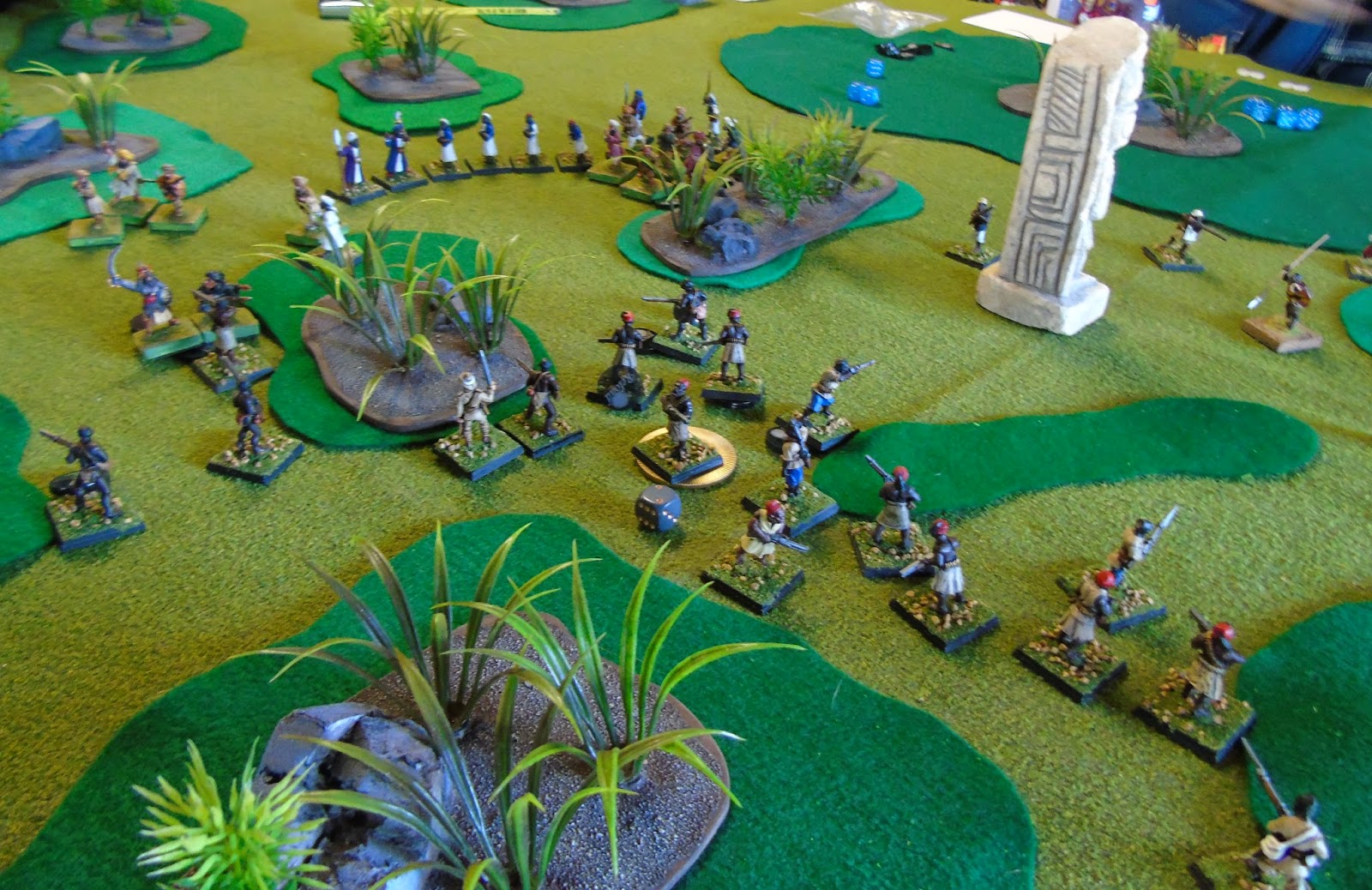 Just great, the Arabs and Natives are slicing through my troops, can I possibly roll enough dice to escape?

Now, I'm sacrificing leaders as I'm completely swamped.  Natives are pouring like rain out of the jungle, well like sideways rain running 3D6+2 or something every turn.  It looks like no one is going to make it out alive.  sad face :( 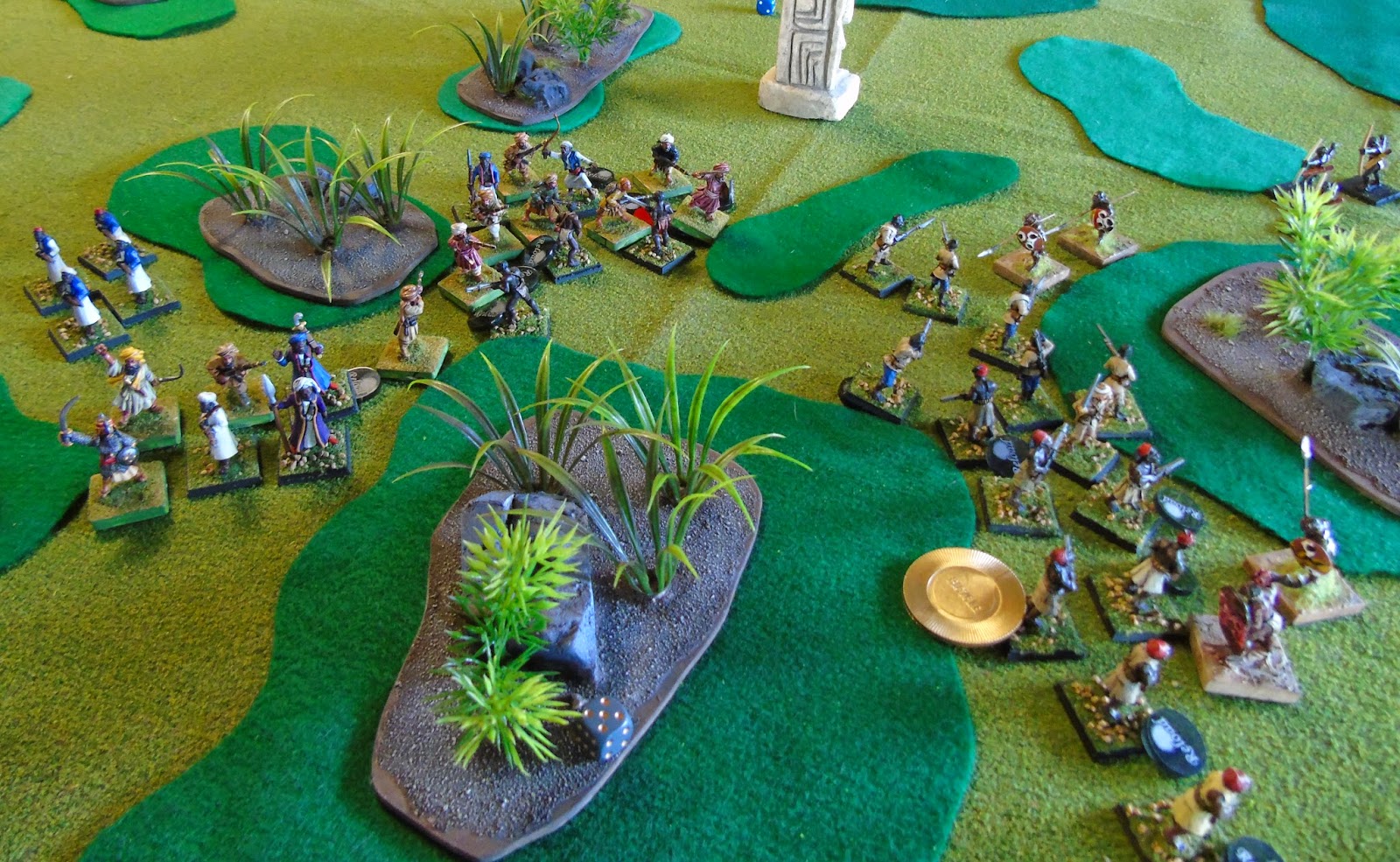 Dang it, there's the last of the Askari.  Farwell dear brave warriors, no time for proper goodbyes. 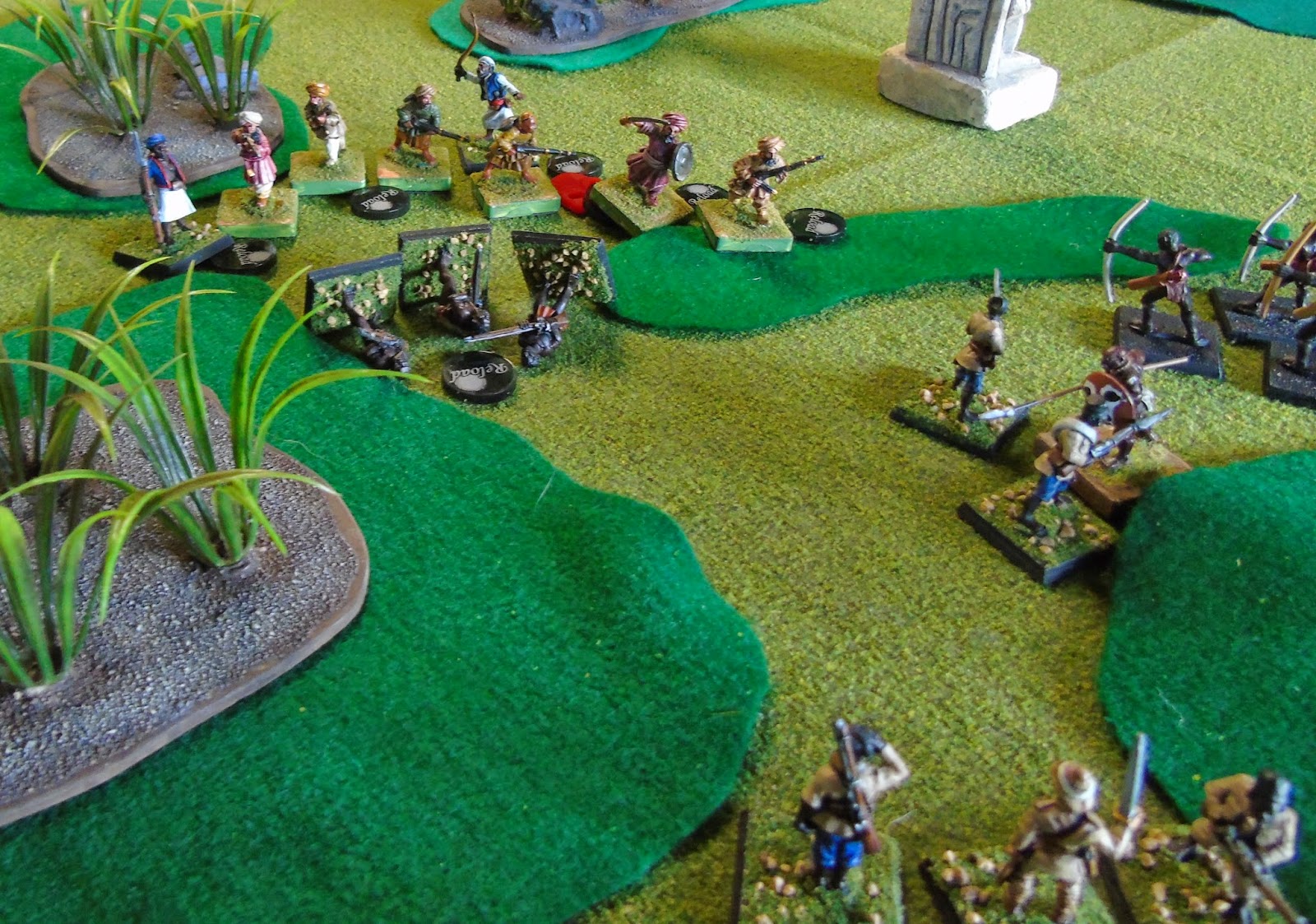 Absolutely fantastic, Caliph Steve has sent troops around the edge of the jungle to cut off my escape path.    Chieftain Dave is cutting though my troops like a hot wire cutter through cheap Styrofoam.

I have one 2D6 chance to move almost 8 inches off board before I'm enveloped, surrounded, encircled, encompassed, blanketed, fenced, hedged, ringed in, corralled, captured, and ensconced even.  They want to make my blood be on the outside. 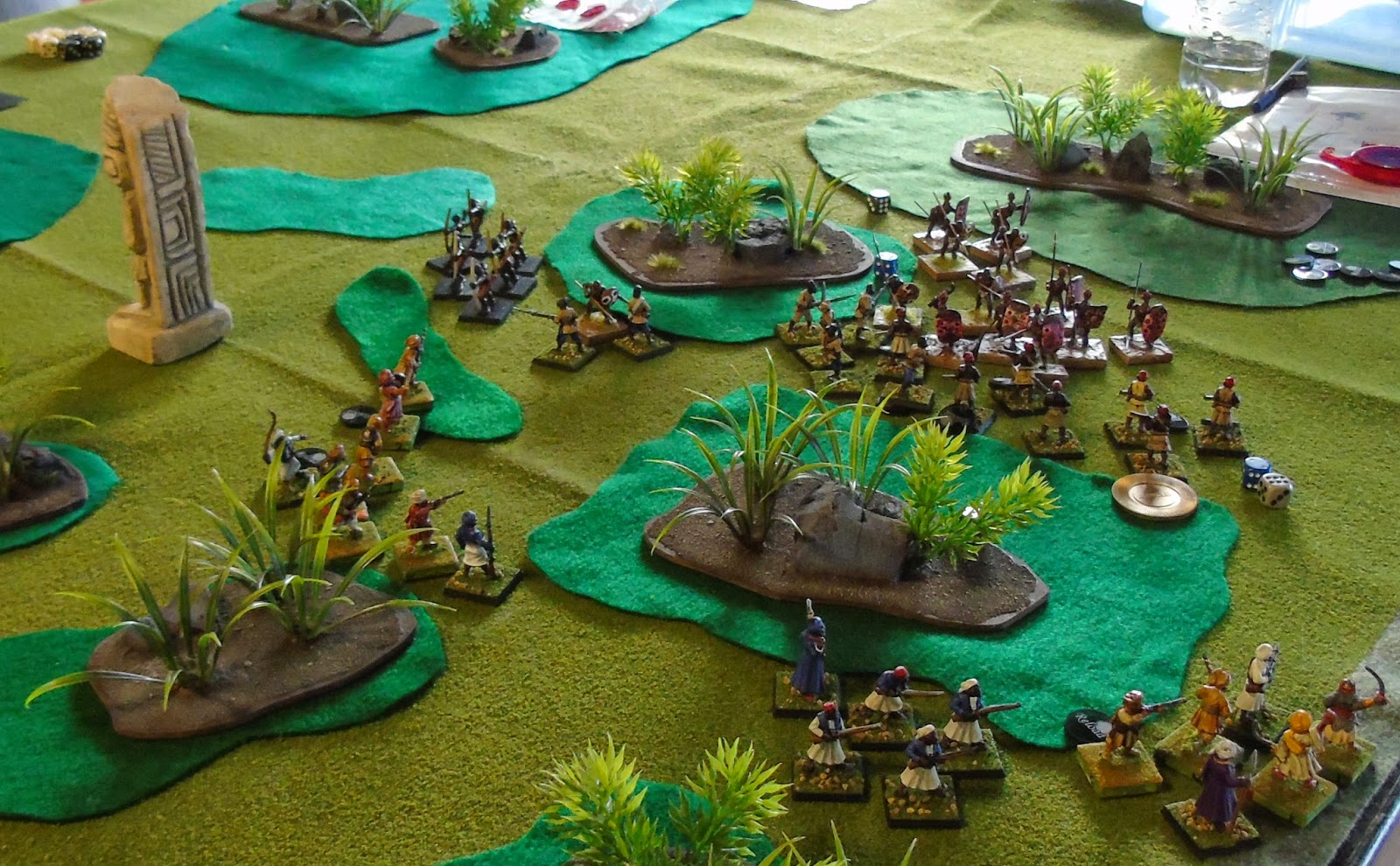 So the relic blessed us and we roll an 8. 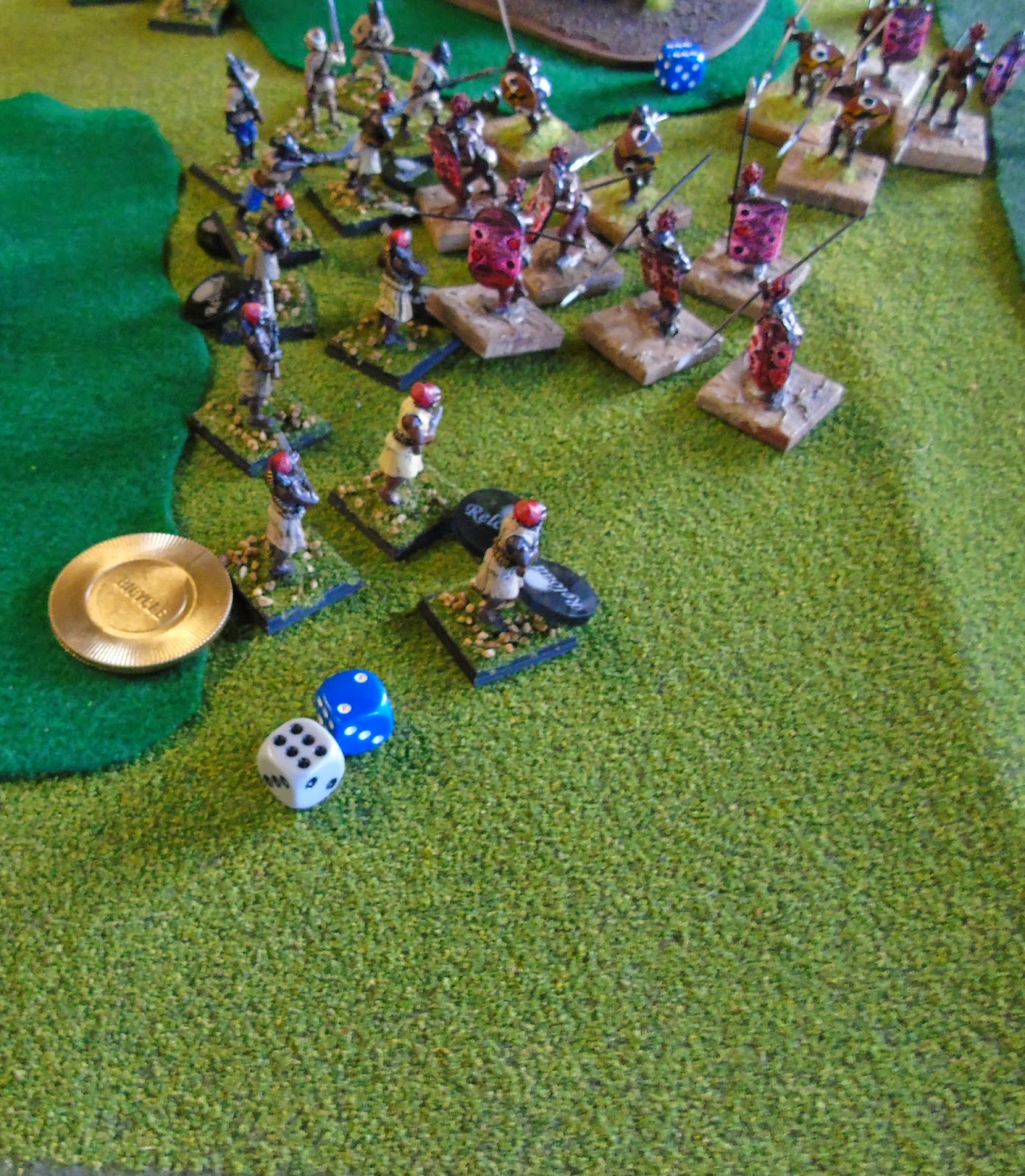 
If you are in Albuquerque on April 25, stop by the Veteran's Museum for Gameday 2015.  A similar version of this awesome game should be in the evening slot.  But you must show up for an epic ECW game in the afternoon, and John's Bolt Action and Star Wars Armada in the morning.

Till next time, when I shall have more boring French for you.
love,
Baconfat!
Posted by Baconfat at 4:53 PM