Dacians, Rus, and Dragon Rampant Action!, or the Terrible Misadventure of the Mindless Charge.

I didn't get a lot of minis done for today.  Done is actually a relative term; I'm out of Super Glue and no one has any flock and their shields aren't attached yet.

First is a handful of Warlord brand Dacians.

The standard bearers are tipsy models and I will eventually have to replace the pole with harder metal. 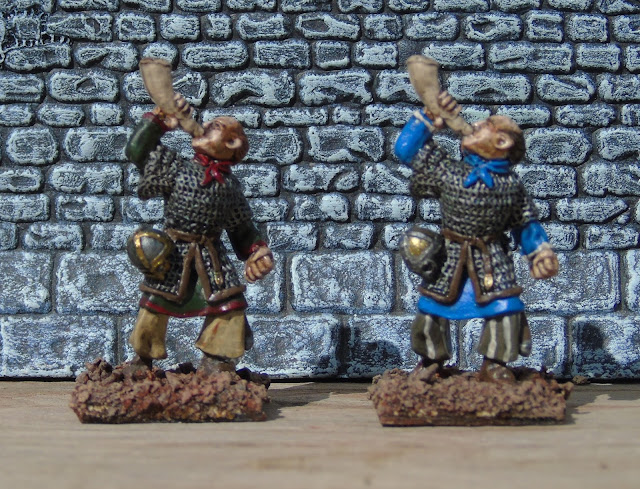 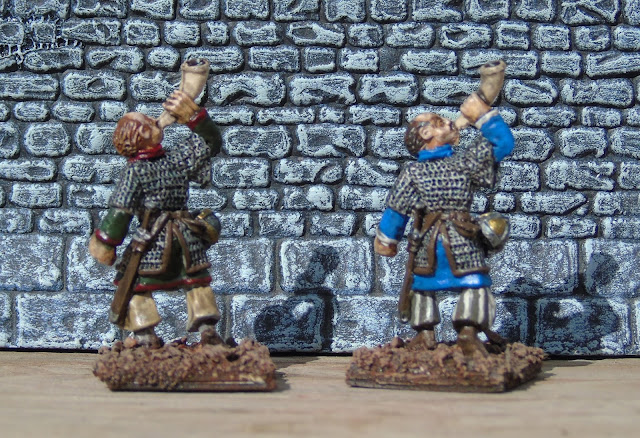 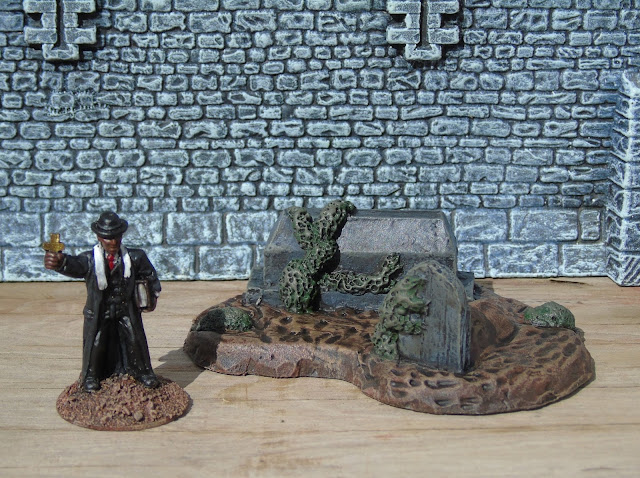 I have no clue which company made the little resin grave thing. 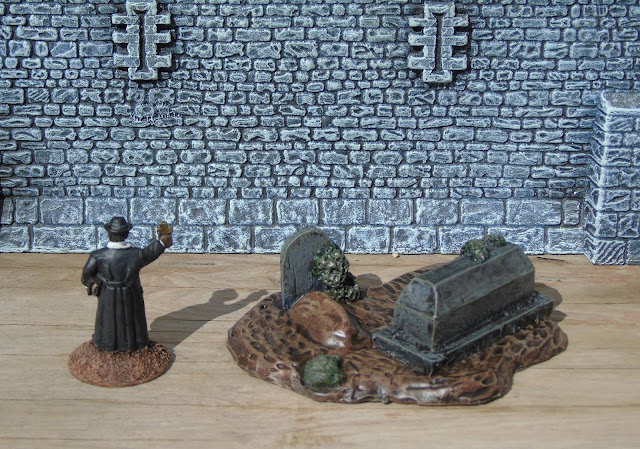 On to some action, the maniacal genius Dave and I got together and tried out Osprey's Dragon Rampant rules.  We went for 24 point armies; Dwarves vs. Barbarians. 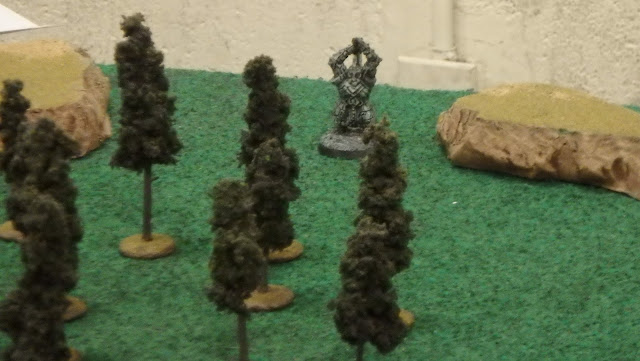 My plan, as attacker, was to soften up the three units of dwarves with my expendable Bellicose foot, then finish the short bearded beasts off with my three heavy units.  Then we take their gold and get drunk.  Despite it's simplicity, it's pure genius and can't possibly fail. 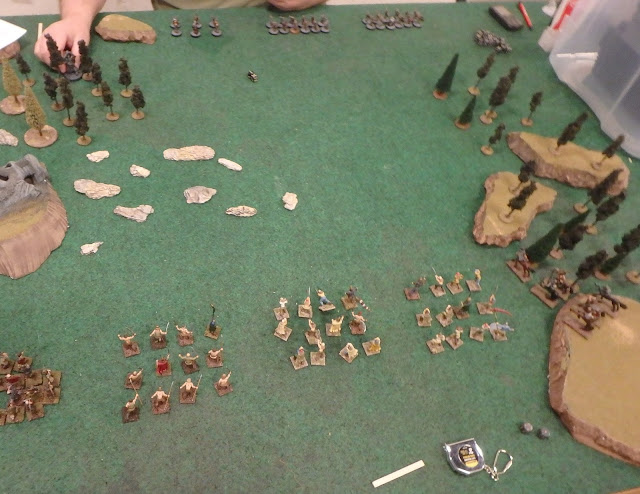 The army moves forward at a quick pace. 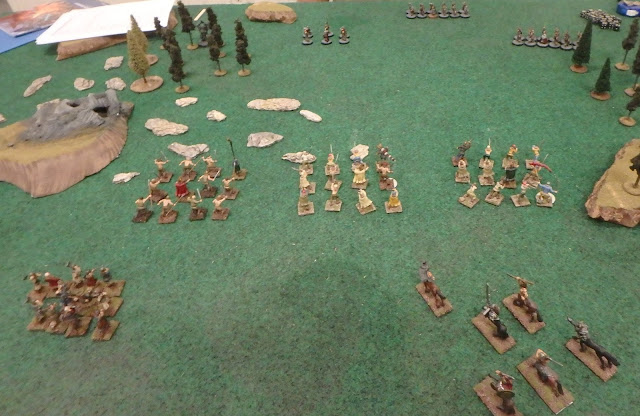 Some initiative problems have allowed us to mess up our organized lines.  Did no one read the plan? 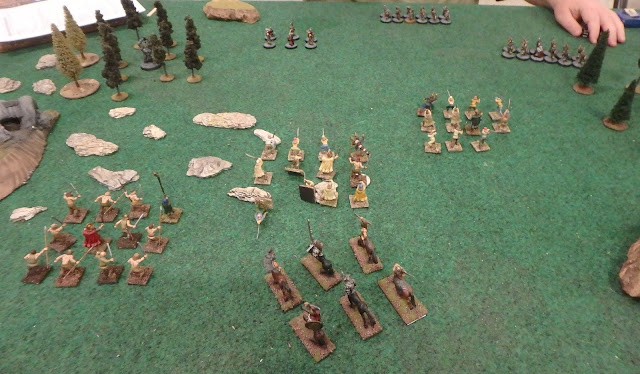 Two bellicose units have almost made to the dwarven line, but the third is dicking around in the rough ground.

Uncontrollably one group of bellicose charge the elite foot.  They lose six or seven models and are annihilated.

The centaurs charge the same unit of dwarves. 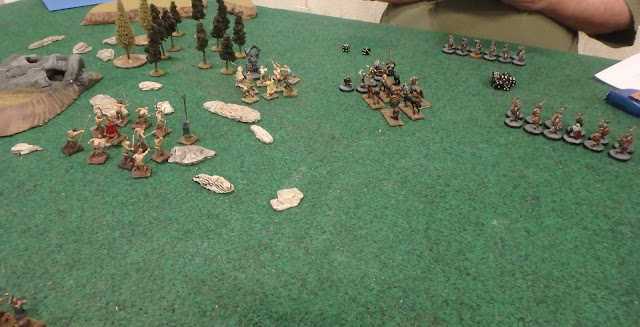 One of the two remaining bellicose units countercharge the giant smashy Guardian.

The Guardian backs off from combat. 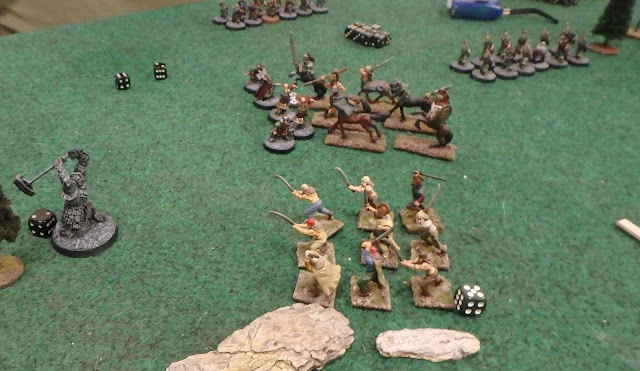 The elite foot also lose combat and fall back. 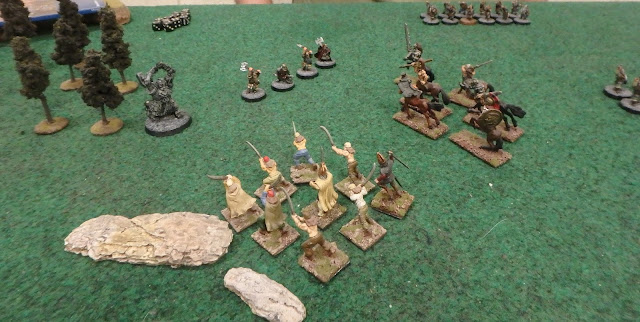 The dwarven axes charge and are counter charged by my successful cavalry.  The battle might be won already.

Nope, the Axes make dog food out of the centaurs.

And the bellicose foolishly charge the Guardian again.  He's now smashed seven of them into a fine pulpy barbarian mush.

The five remaining guys and two centaurs are then charged and shot to death. 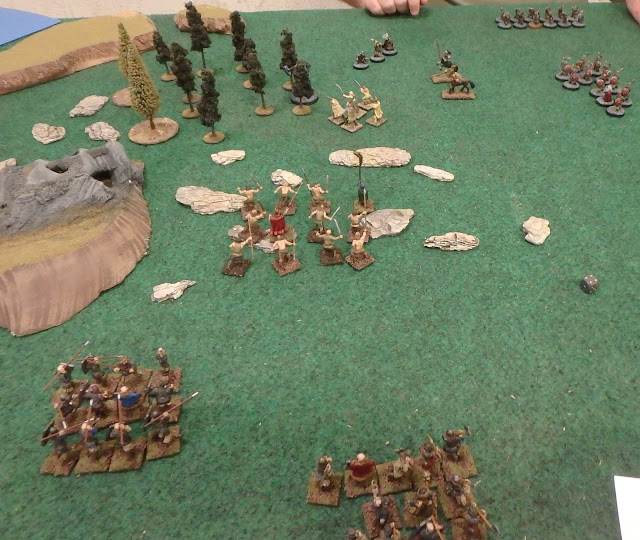 Terrific, my front line consists of a small pack of idiots looking for shiny things in the rocks. 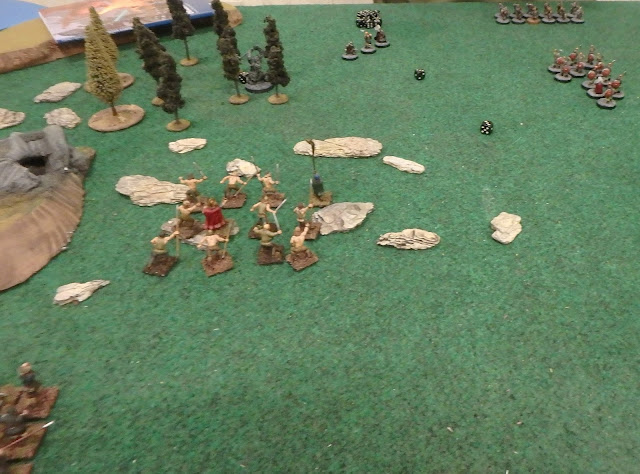 At least the guardian is slowly wandering off the field, as my heavy foot advances. 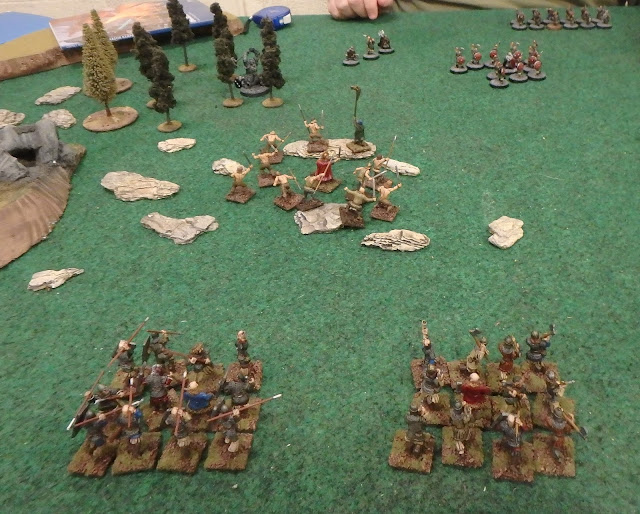 Wow, they are really activating a lot now. 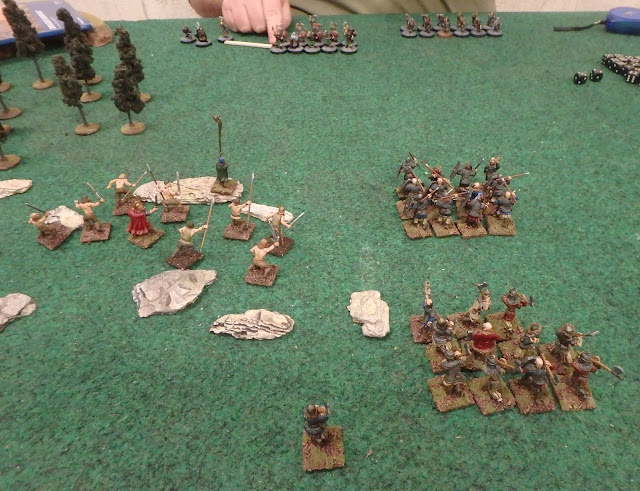 Huzzah!!! the daft bellicose morons have made it out of the rough ground.  They did just in time to blasted into oblivion by the dwarf archers. 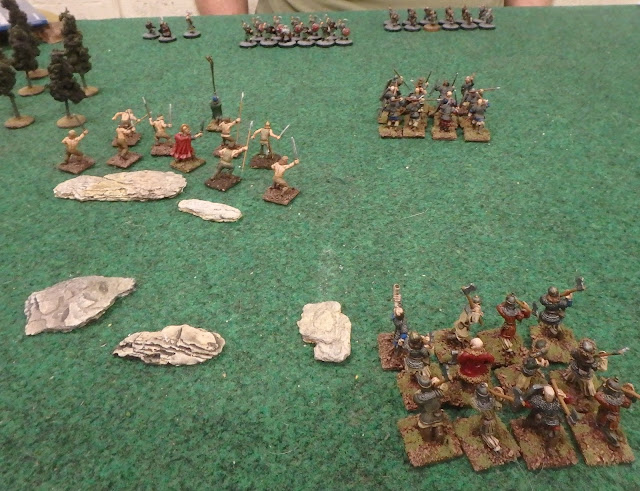 Notice the bellicose foot are missing.  As my heavy foot clash with the dwarf axes. 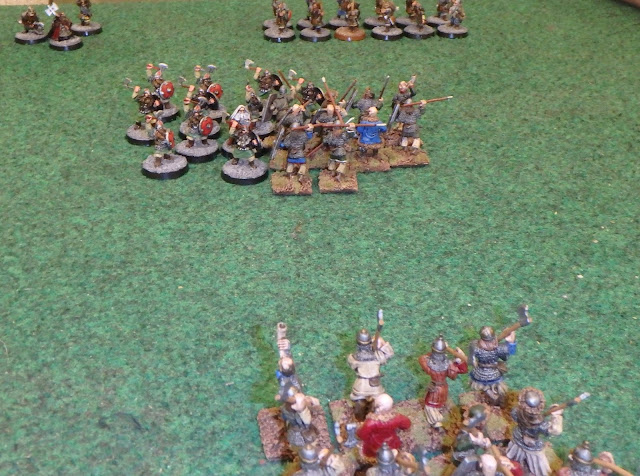 We kill one and they kill four 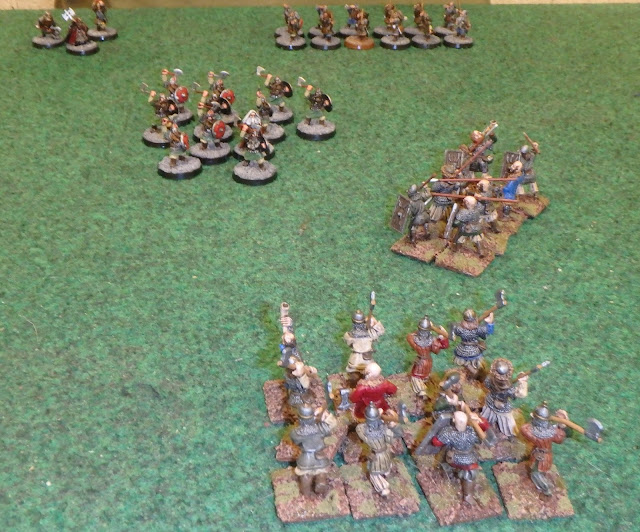 One more round of brutal dwarf archery and the illiterate horde flees the field in disgrace. 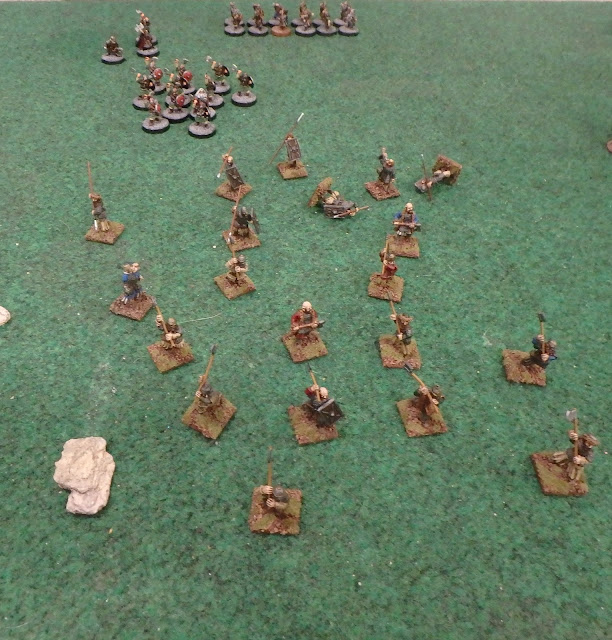 Here can see the dwarves cheering our quick departure.  Thank God, they don't have cavalry to run us down.  The dwarves killed just over 40 of us and the other 26 ran away. 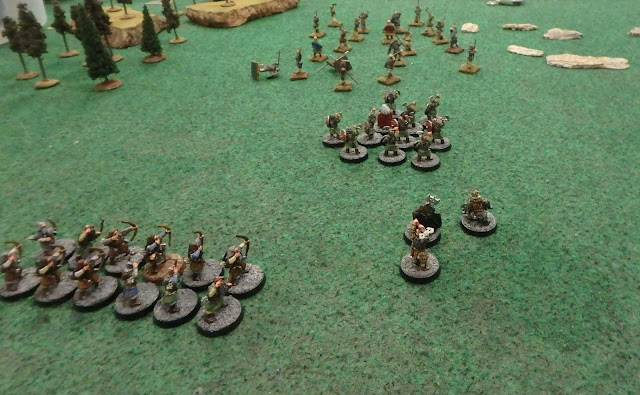 Till next time, beloved reader, when I hope to bring you stories of dead dwarves.