Pulp Alley: Phantom Menace meets the Graverobbers in the Forest of Doom and lots of Skulls

Today we have another exciting Pulp Alley adventure with Dave Lowe and Sean.  The film stars the Phantom Menace and his valiant team. 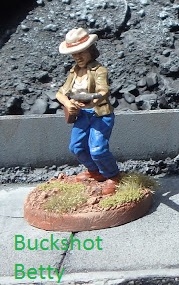 No adventure is complete without antagonists; Rick O'Connell and his Imperialist gang. 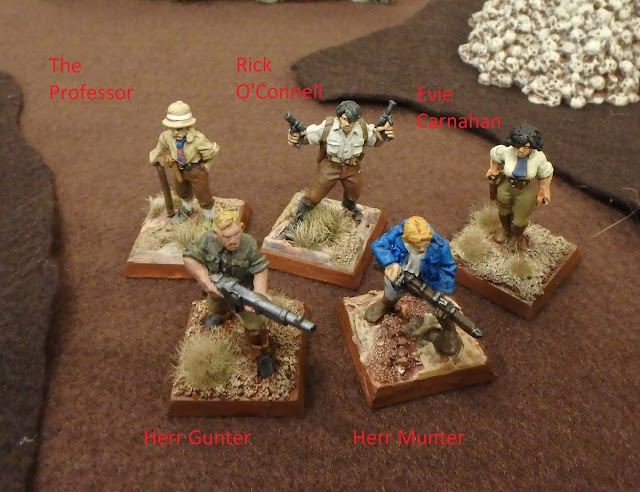 The Forest of Doom and Lots of Skulls.  The red chips identify the five objectives/plot points the players must gather to win.  The plot point in the stone structure is the major (most important) plot point.  The dark brown patches with lots of skulls are perilous terrain. 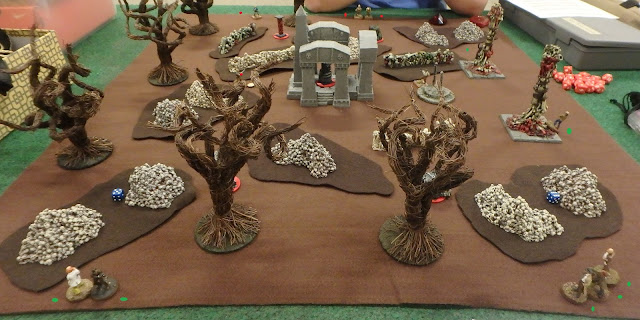 While McDonald and Mr. Hooks run to the one on the left. 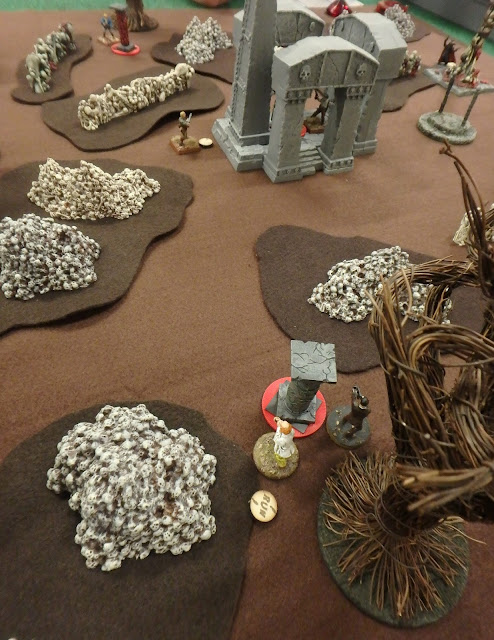 For unknown reasons, the Phantom Menace and Buckshot Betty hide behind gruesome columns and fire uselessly at Evil Evie and the Professor.


Gunter runs toward the major objective and Rick actually makes it there. 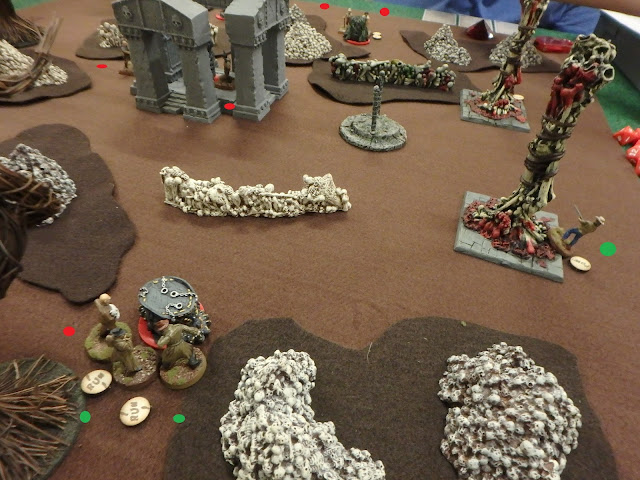 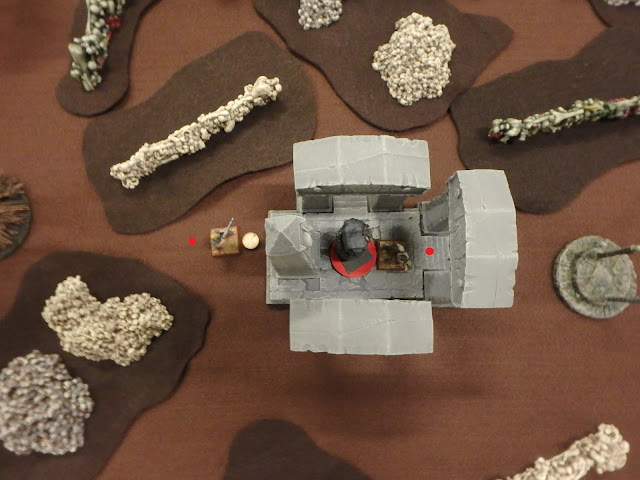 Slick and Rabbit hurt themselves trying to solve the minor plot point. 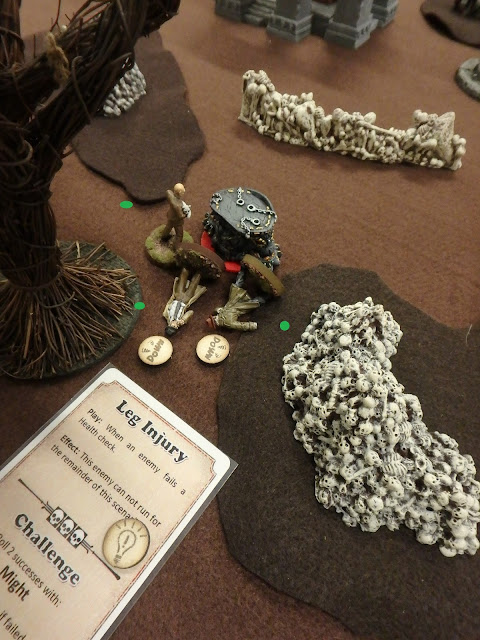 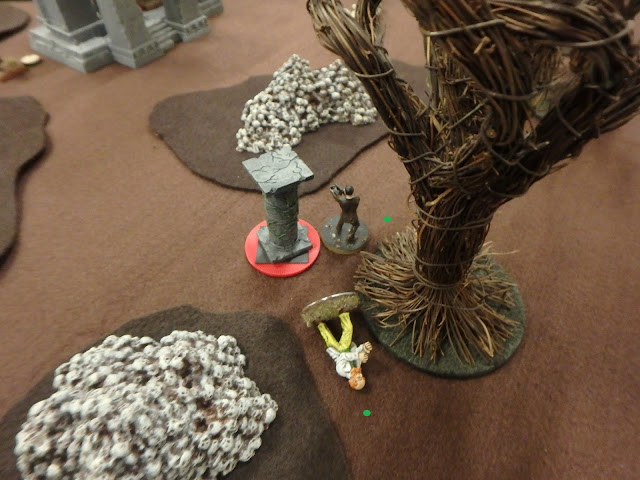 And so does Rick's mercenary Munter.  You can see Evie has not followed suit and uncovered her plot point.  The Professor runs through the perilous skull piles.  One:nothing, bad guys. 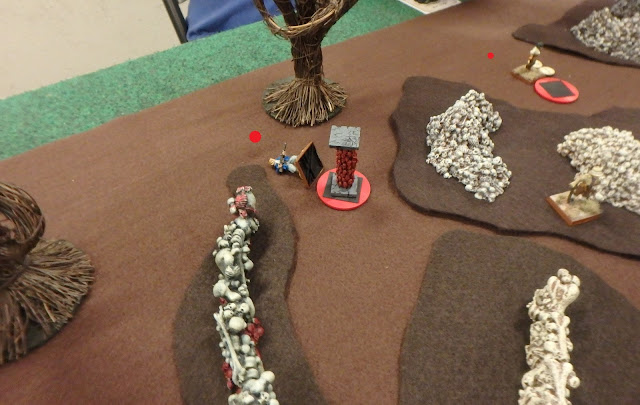 Hooks makes up for McDonald's failure and uncovers the plot point.  Score tied, 1:1. 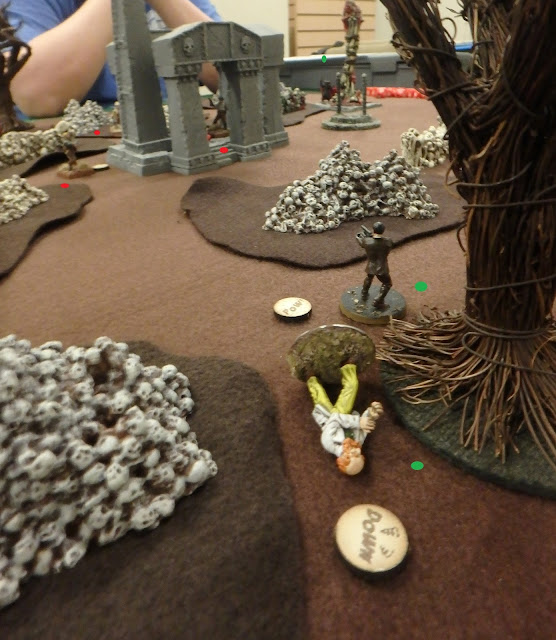 Ronald gets up, and runs to help Dr. Naughty and Harvey Rabbit.  Slick has failed to get up and is out of the game. 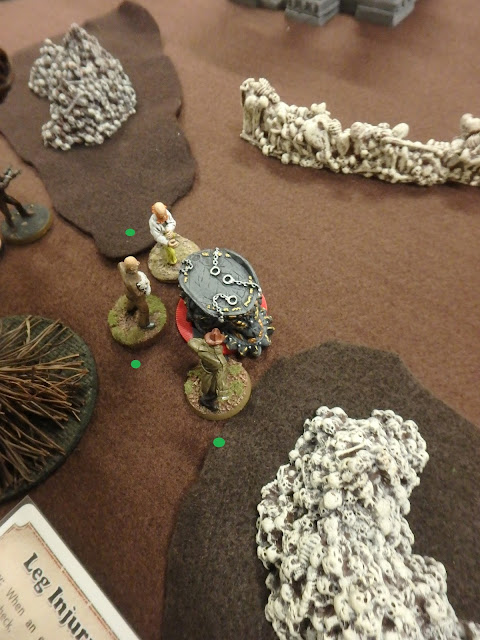 Menace and Betty continue to pointlessly shoot their guns. 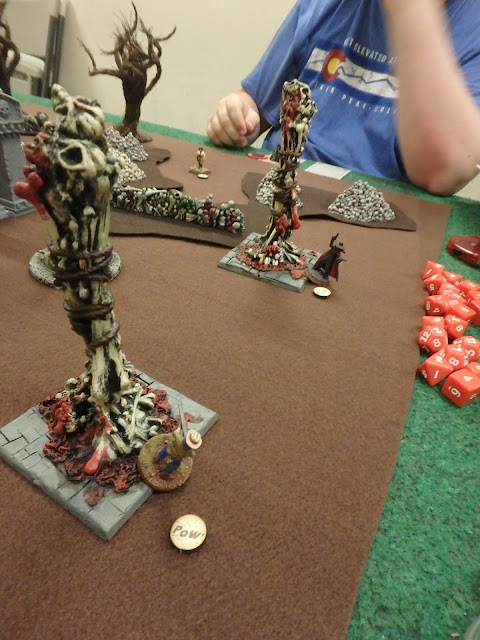 Crap, Gunter has recovered and uncovered his plot point.  I hate Gunter and we're losing 2:1.

Donald hurts himself with the plot point, falls down and stays down.  Luckily Dr. Naughty and Rabbit defeat the plot point.  Score tied again, 2:2. 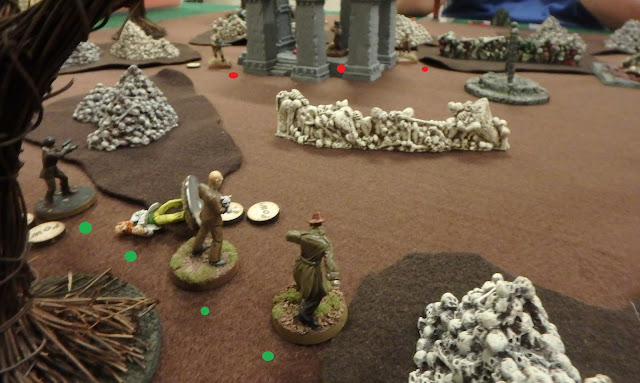 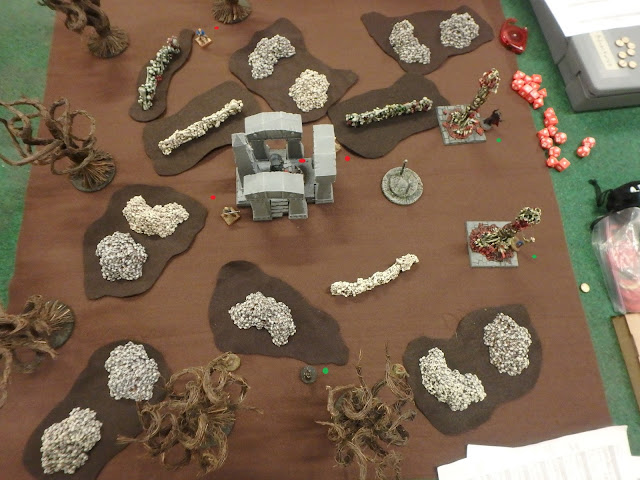 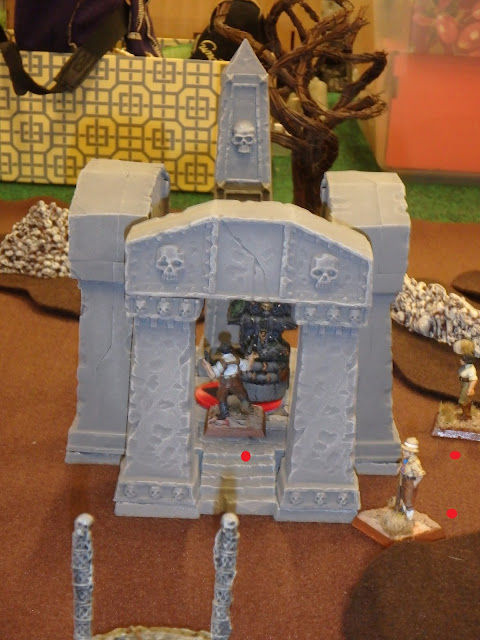 Dang it, there's two of them in there.  The devilish, yet amazingly handsome, Rick uncovers it and we are now losing 5:2. Dr Naughty practically teleports across the table and shoots (misses at Gunter). 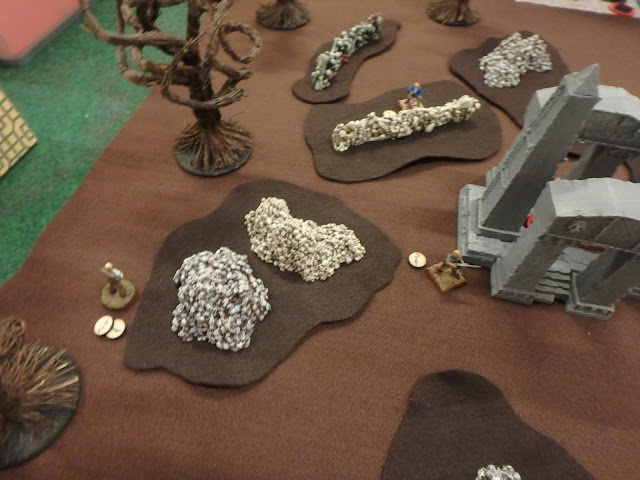 Rickhead and Evie run out of the temple and shoot down the good doctor. 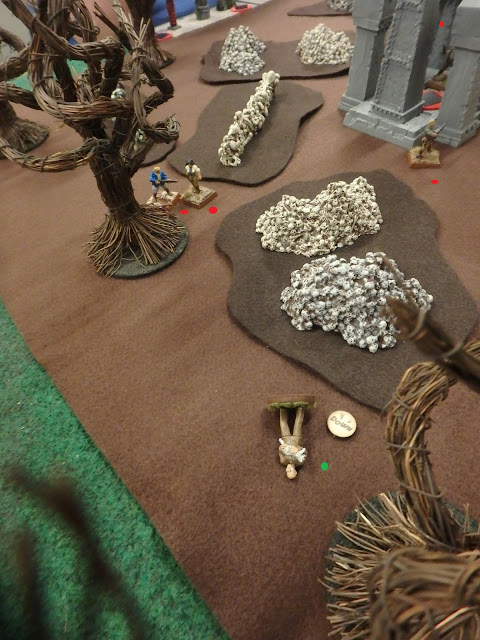 Munter joins the cowards.  All three of these villains have objectives. 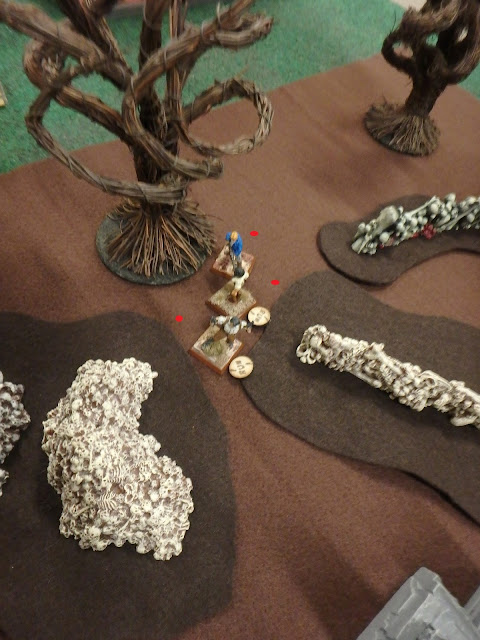 Gunter attempts to join them, but falls to Mr. Hook's excellent shooting. 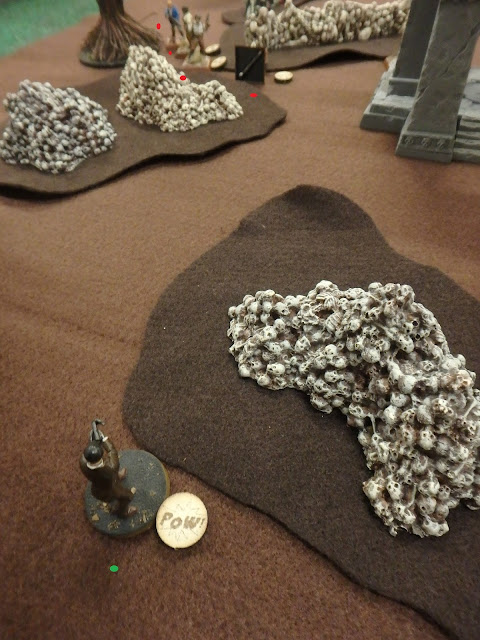 Betty has finally left her column and blasts the professor with her shotgun.  Harvey tries to keep up, but he's not one for running. 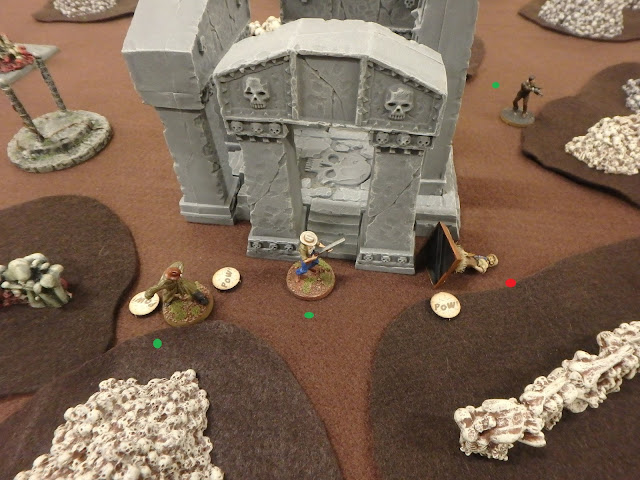 The Menace tries to catch the remaining three villains, but.... 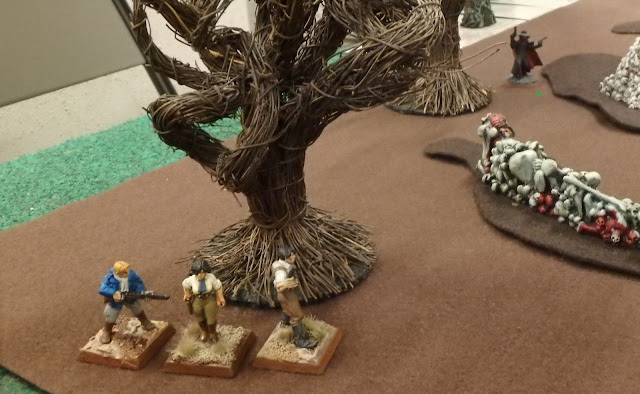 ...he is too late.    "DEFEATED AGAIN!"  I will have my revenge dirty Rick  and I'm going to need a larger gang, if I continue to hide the whole game." 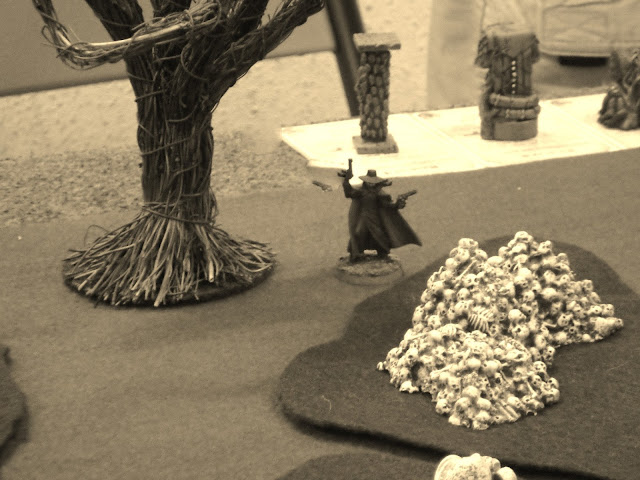 Love and kisses for now.  Till next time, when I hope to have some finished models.  I have a bunch nearing completion, but have been distracted building a 3D spaceship for the game Battlestations.