Dear Cherished Visitor,
I've completed an eight man crew for one of my two Prussian cannons. The models are Old Glory metals. The first unit of my Warlord Blackpowder Army is finally done. Blackpowder armies are quite large with at least 15ish units each. The units themselves can be quite large as well. Standard infantry units range from 24-30 models; Cavalry range from 12-16; Artillery units are a single gun; I think I may have lots of artillery.

Here's a new shelf I recently acquired free from a great friend. The holes where one sticks the studs to hold the shelves are not the same on either side, except where I have the individual shelves currently. Normally I match the wood and add more shelves as tiny men don't take up much room. So I won't be able to maximize storage on this shelf unless I drill more holes. It's not an emergency, as almost everyone on it's not painted anyway. I think it take two more shelf sets (a grand total of six) to give every army man room to stand around and collect dust. So if you accidently stumbled upon this page and have some extra shelves you're willing to give away and you live in Western Washington, please leave a comment saying as much. 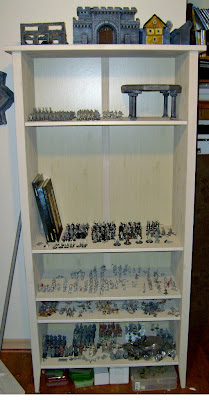 I've taken another picture of my filthy painting desk. The stuff in the back row space men things never seem to get taken care of. New additions include: some Rus which will probably end up in the lonely back row quickly (as I have no intention of making a Rus army), some more zombies, British rockets (put together incorrectly by me), a couple manlets (for siege fun), an ancient French Carabiner model of unknown manufacture, and a few fantasy pistol toting horsemen. I had spilt some paint and didn't want to waste it and the pistoliers were the first primed models I could get my hands on that needed that same color of paint. Normally, I cry over spilt paint. 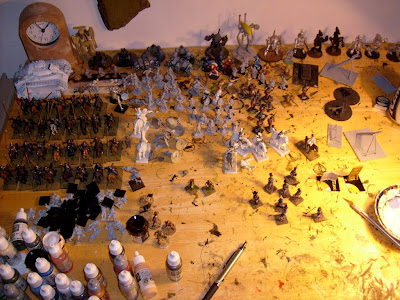