This brings the Prussian artillery park to six 6 pdrs (3 are Victrix British guns) and 24 crew.  A start to a Black Powder army.  The crew are a mix of Old Glory and a few Perry models. 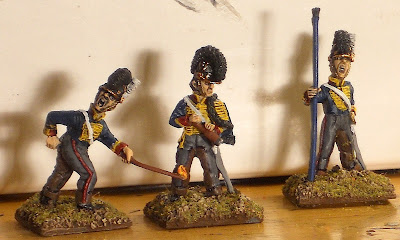 That bring the total number of rocket crew to 11 and too many launchers for them to support.

Lastly, I rummaging through the junk mini pile and found a Herroclix Marvel Comics villain named Ultron.  To Ultron's left (our right) is a RAFM/GW Cyberman.  Ultron looks very much like a Dr Who Cyberman leader of some sort, all I need to do is jam a square wire frame in his little soft plastic head. 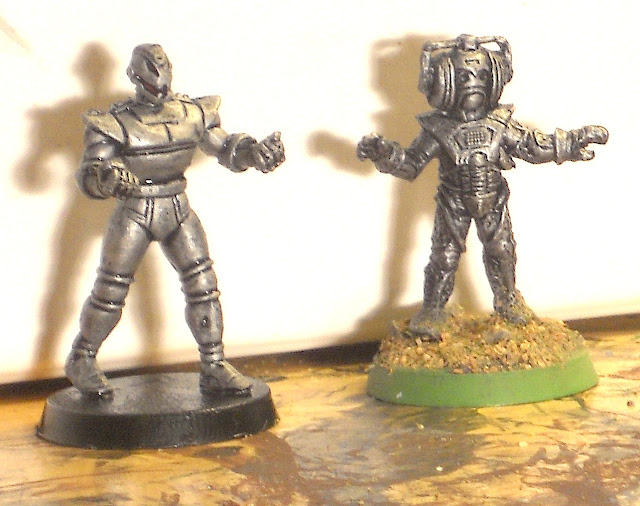 I have a few WW1 Brits,  a few Fallout (video game) minis, and a couple zombies to paint then I'll start some Warlord Prussian Landwehr.   Prussian Landwehr are rather dull compared to the exciting new Russians they're putting out.

I've broken down mediocre Prussian infantry into 38 painting and preparation steps.  The first three are done:  assembly, flash removal, and gluing to a base.  Some paint before basing, by gluing to popsicle sticks or what not.  To save time painting extra steps must be cut.  The Landwehr have most been double based as their paint scheme is not that detailed that I'll need a lot of room.  If you look closely, some of the troops are nicked on their hats and elbows.  The child slave labor (I own them so it's not illegal) I employ for sprue removal is not very accurate.