These are some Rohan Royal Guard models, which I honestly don't remember from the movies.

I tried to keep them fairly drab and miserable looking.

I have a solution for when your wife "organizes" your hobby supplies and your flock is not in the pile of junk you thought it was.  Wait till she falls asleep and put some quiet scissors to work. 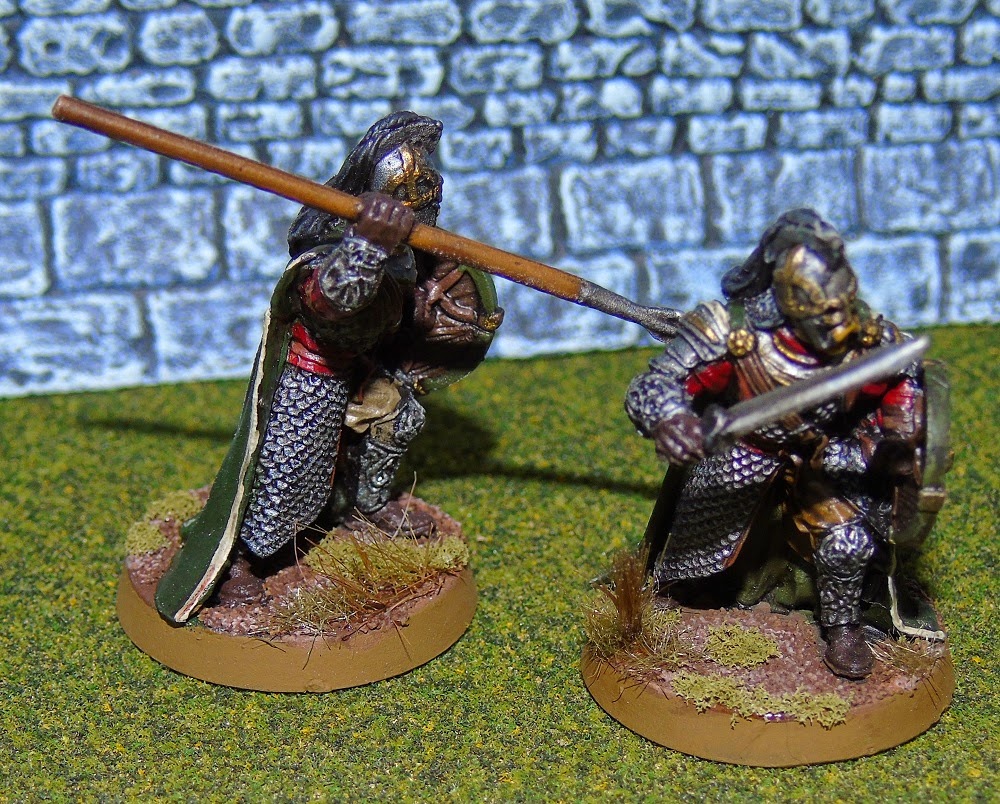 Yes, that is her hair on their bases.  I figure hair grows 1/2 inch a month; I'll have an unlimited flock supply until she ages and all my grass turns blue.

These are some  Old Glory Bohemian Archers (DIF-25) from one of their better ranges, "Vlad "The Impaler" & Turkish Frontier range.  I believe you get at least five or six poses in the 30 man bag.  There is something funny with one of the poses as you'll see below.

Here they are turning their backs on you.

Here they are on a castle wall.

This particular model has an odd condition. 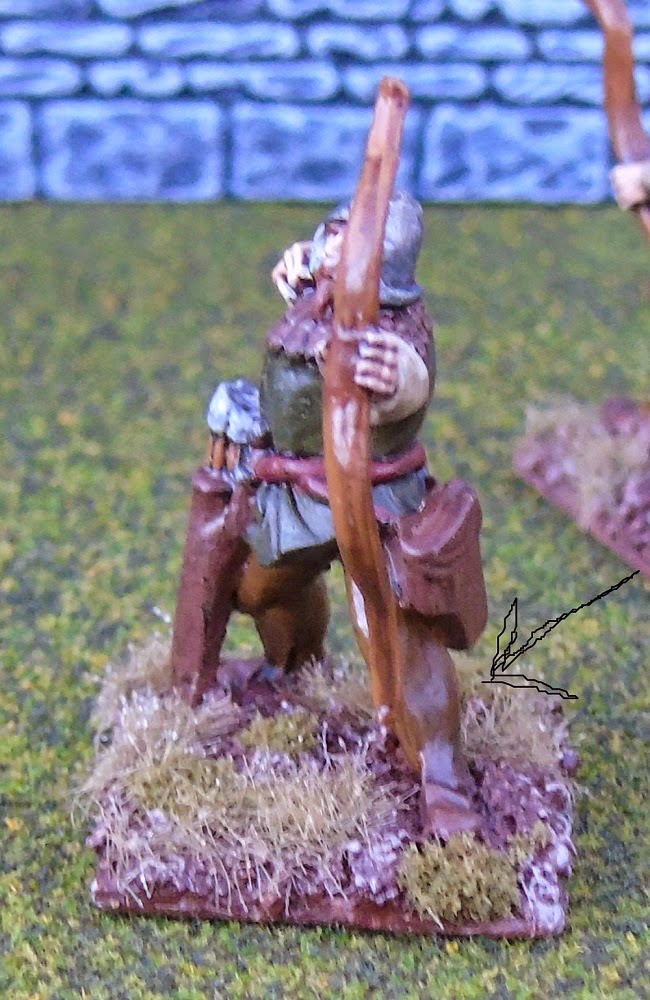 Elephantiasis or severe gout, look how big his left leg looks from the side. 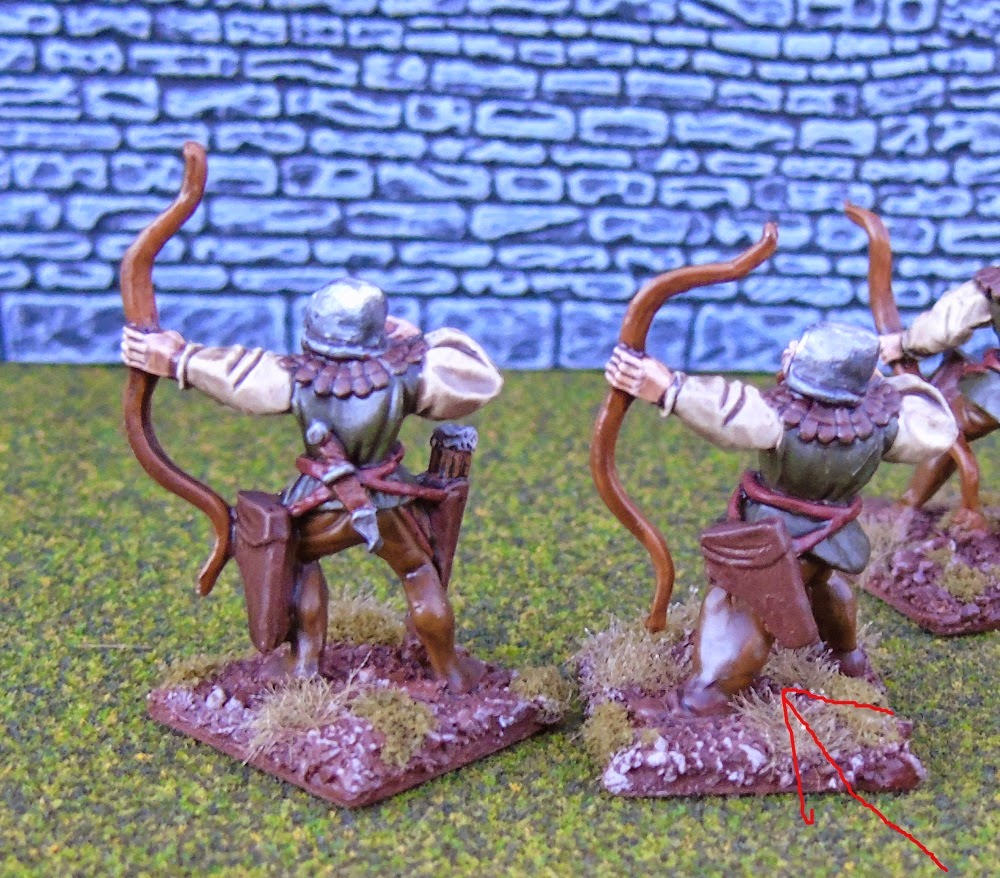 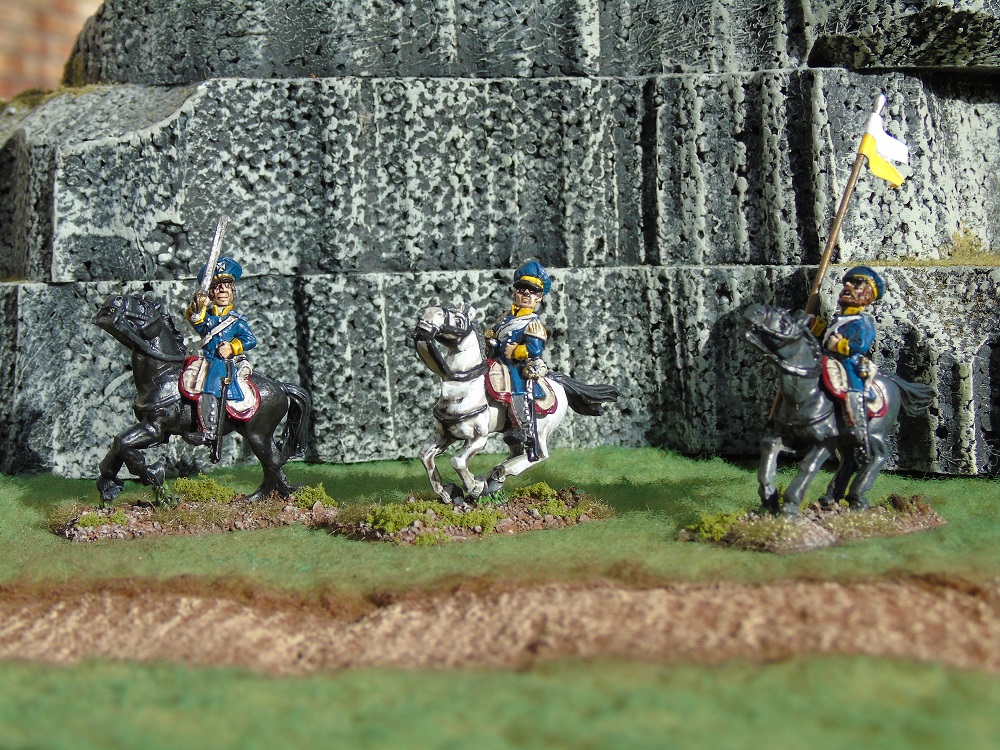 Here's three Prussian Landwehr cavalry, made by Old Glory.   I would have more, but ran out of Vallejo Prussian Blue paint.  There will be seven more in the future. 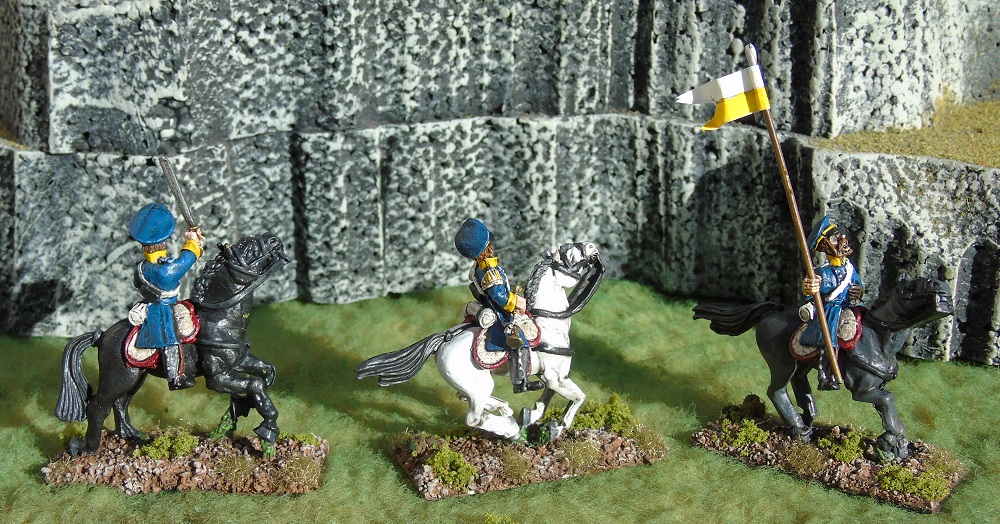 They are from the 4th Regiment of the 4th Silesian Landweher Cavalry.  They are wearing frumpy schirmutz caps instead of proper shakos.

Their color scheme is the result of extensive research. I spent at least four minutes stealing the colors from the terrific "Blunders on the Danube" blog.   Peter's blog is a great source of miniature goodness.

You can see in the close-up, I have my first attempt at adding horse biscuits to the bases.  The first experimental dung is a 50/50% mixture of Milliput and Woodland Scenics static grass.  I think I will have to adjust the recipe and make future poops at a smaller scale.  40mm heroic scale doo doos might really hurt coming out of a 25mm Old Glory horsey.

And lastly a repaint of an old second French drummer. 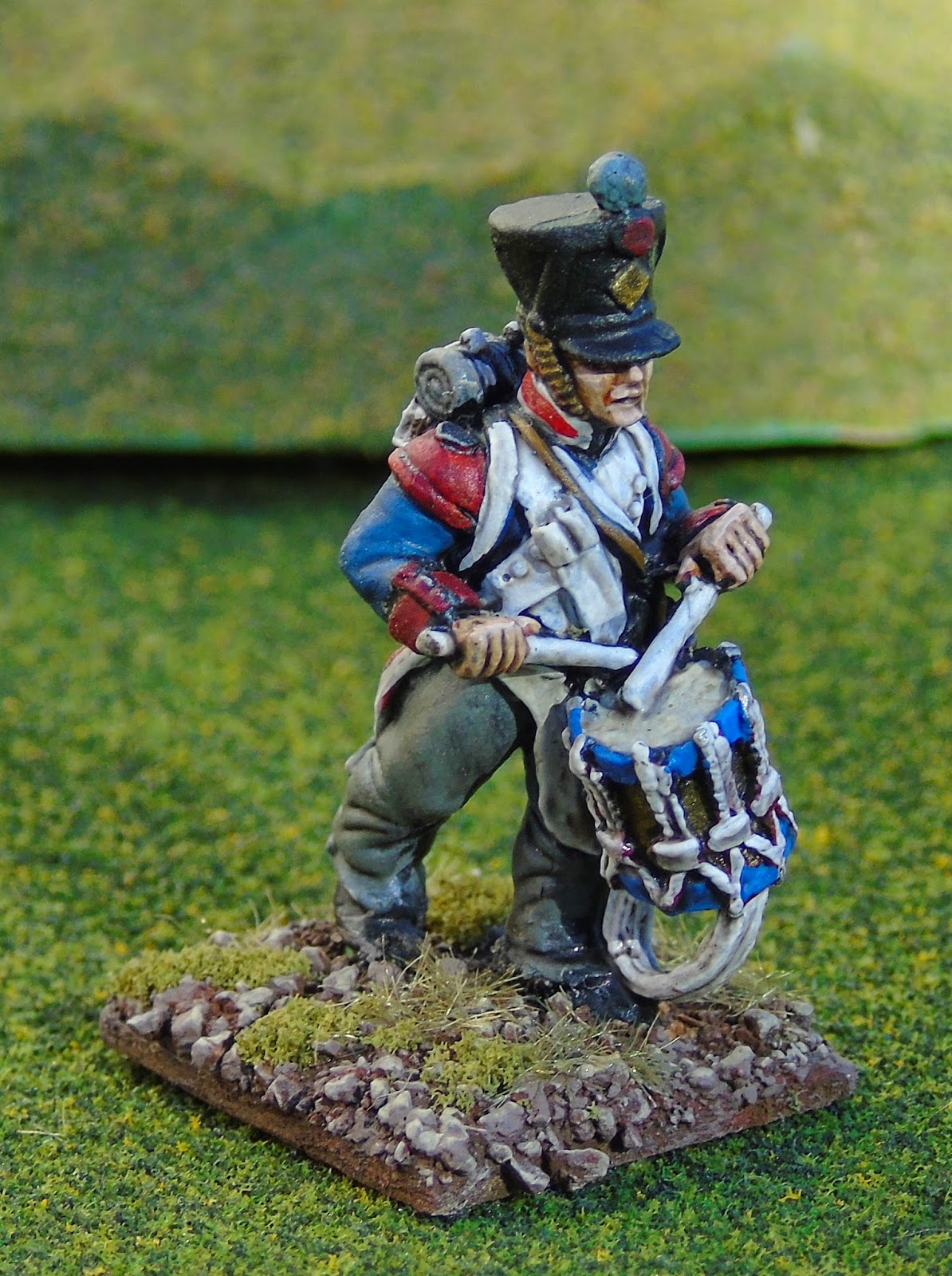 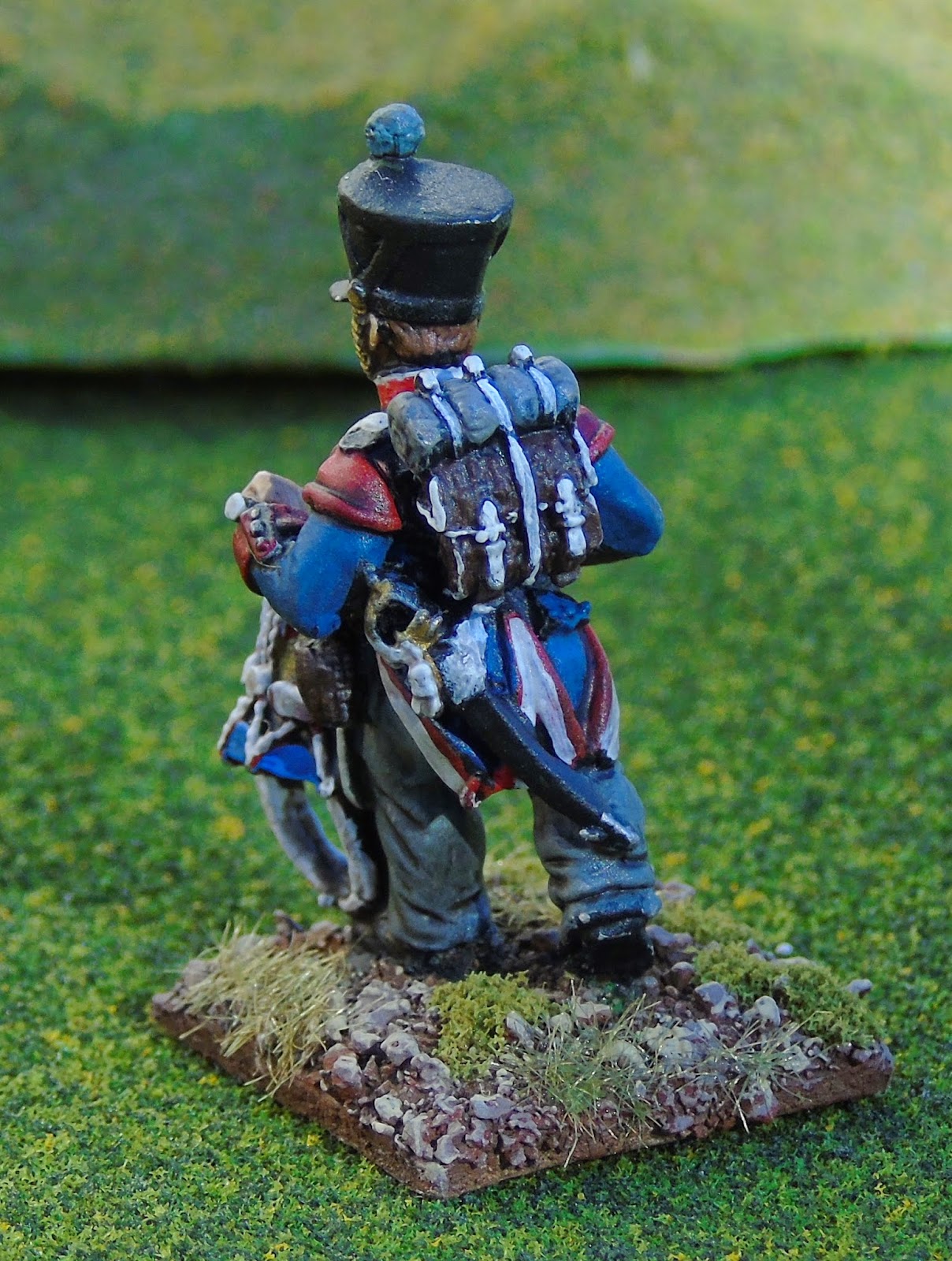 till next time, when I should have Byzantine skirmishers, space marines, and more.  There might even be some French nappies and Cthulhu goodness.