I don't have alot of painting to show you, but I promise to have alot in a day or two.

In more exciting news I played my first game of Lion Rampant.  My valiant opponents brought dwarves and elves.  I brought Hussites and a made up list of Burgundians for my fellow general, who failed to show.


First off, a 4' x 6' table is not big enough for 48 points a side. I couldn't even get all my troops in the initial deployment zone.  We stretched all the way to the edges and I still had troops to bring on during later activations. 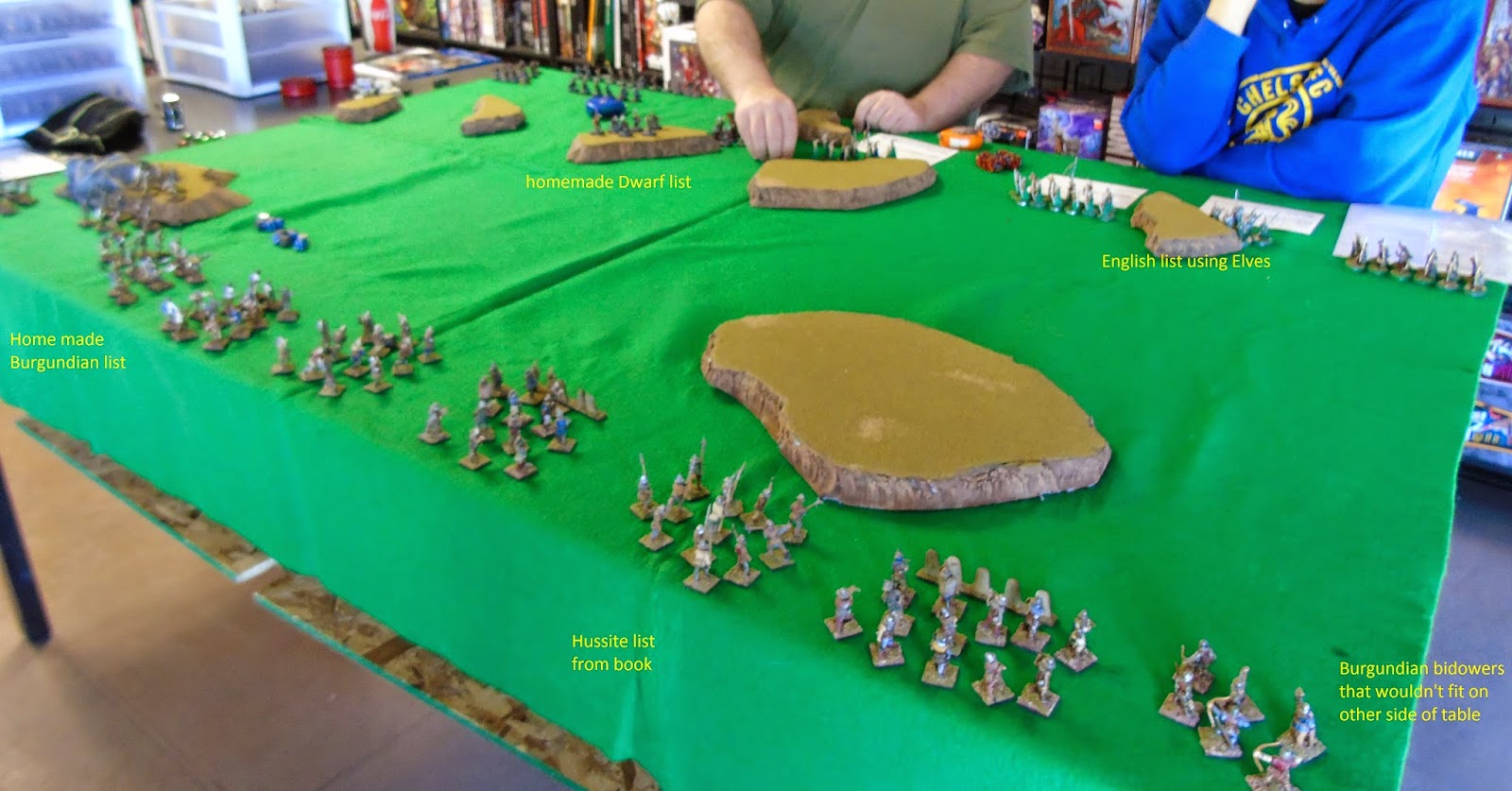 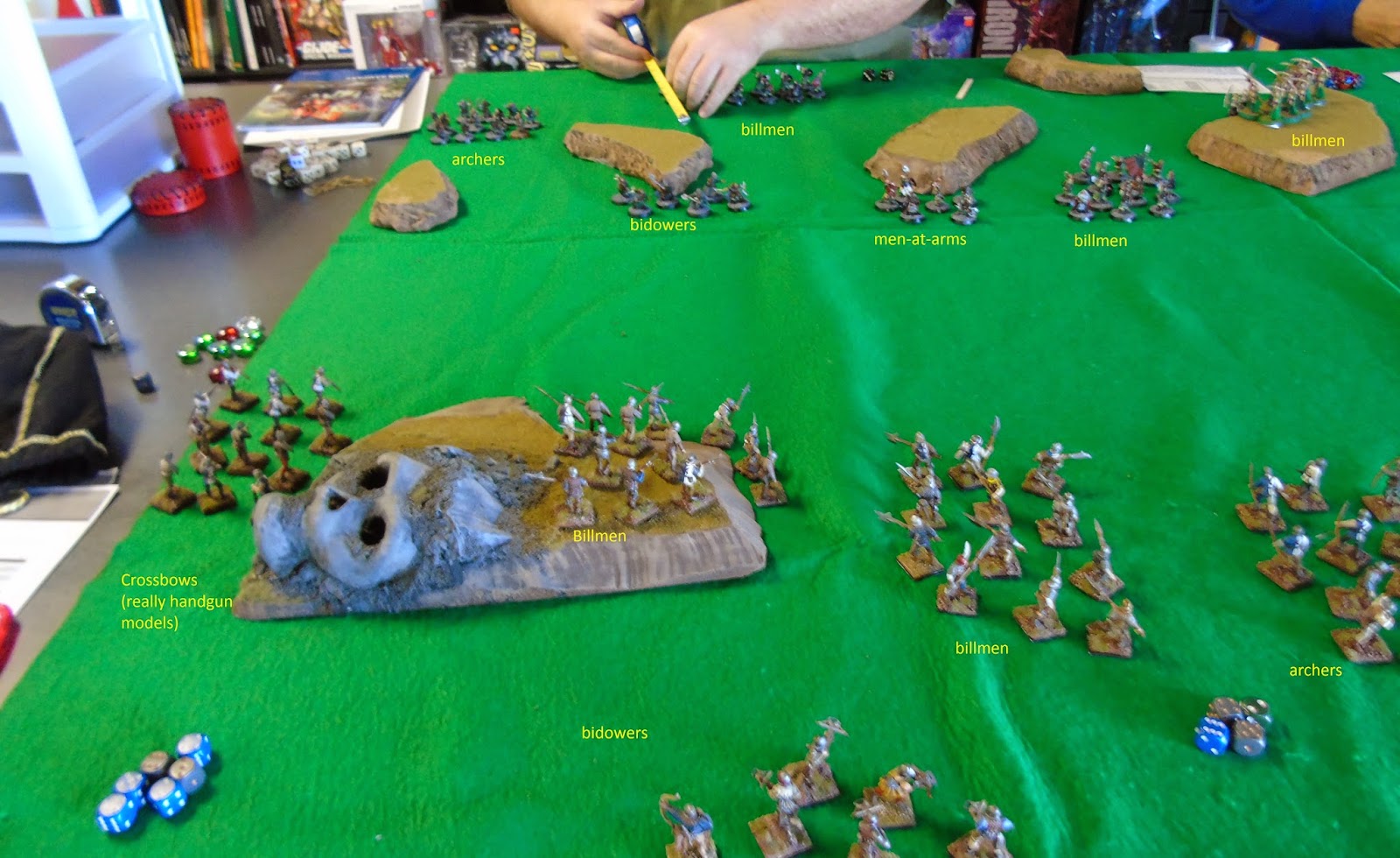 Elves advance towards the Hussite side (there's also some Burgundian bidowers that wouldn't fit on their side).  The Elves had two expert archers, expert Sergeants, and a men-at-arms.  I think he shorted himself two points.  That's only 22 points.

I've since done the math expert archers are no match for crossbowmen with pavise.  Even regular archers will get destroyed by regular crossbowmen in a shooting battle.   Expert archers activate/shoot 71% of the time, while crossbows activate/shoot 57% of the time.  Sounds like archers have an advantage, but the crossbows hit so much harder and the pavise makes them as tough as men-at-arms versus archery.  100 units of expert archers would average 35.5 hits a turn, but vs the pavise they'll only kill 9 troops.  After the 57% activation rate, the 100 crossbow units would average 28.5 hits, 14 of which would be kills.

The dwarves aren't doing great at activating and the Burgundians are setting up units to support each other. 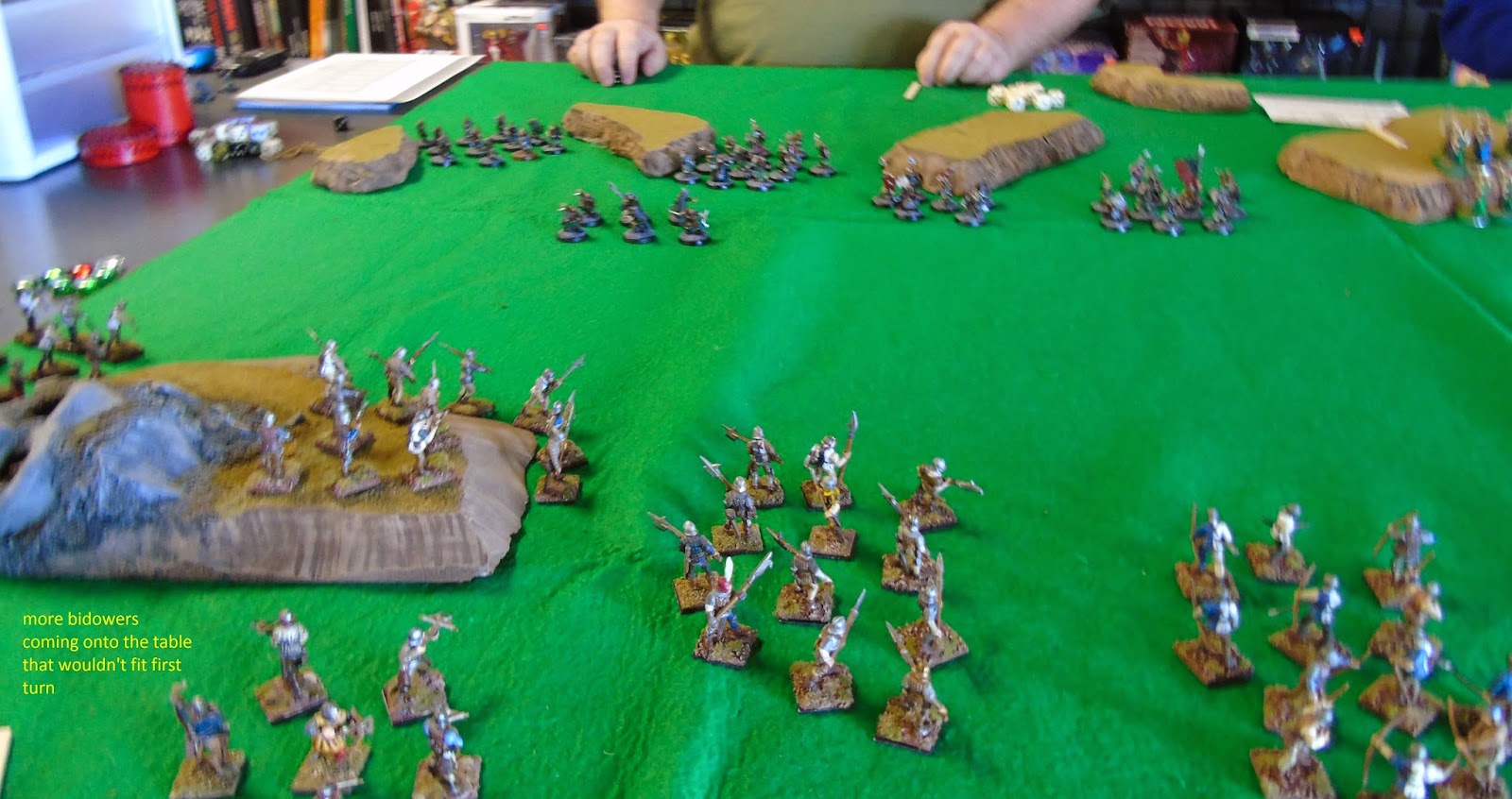 About the middle of the game, the dwarves are about to charge one of three units. 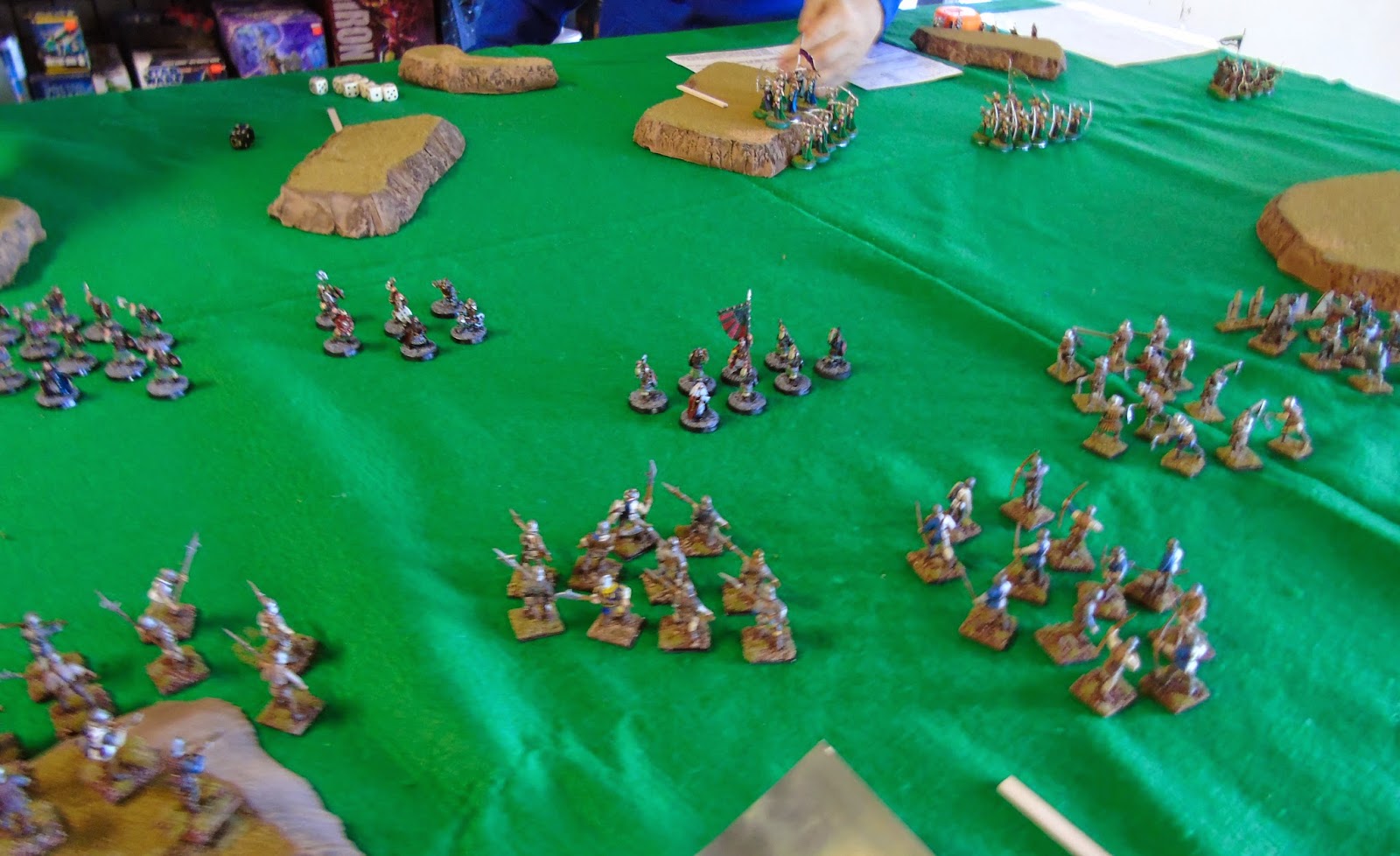 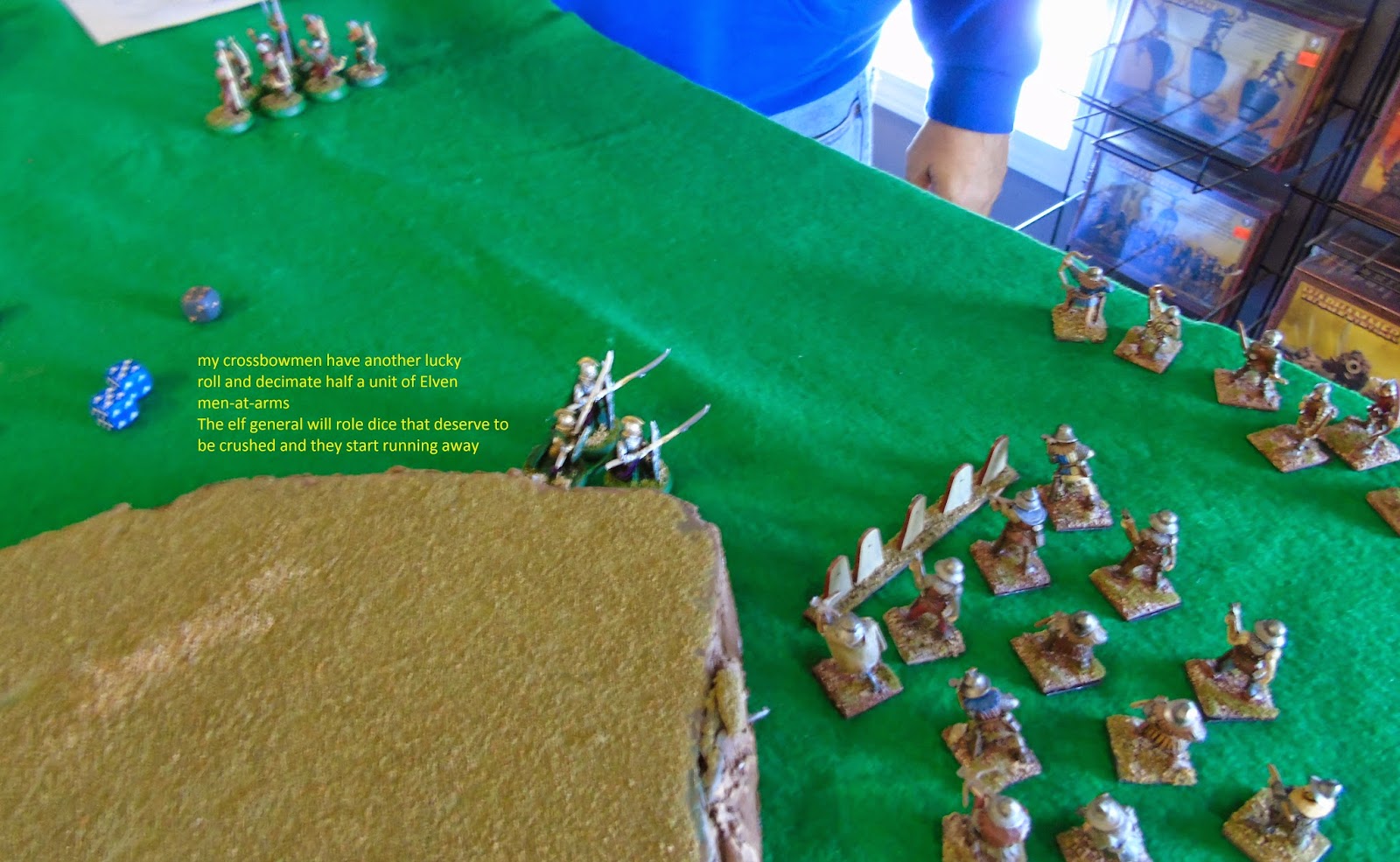 The elves are continually failing activation and increasing their time in crossbow fire land. 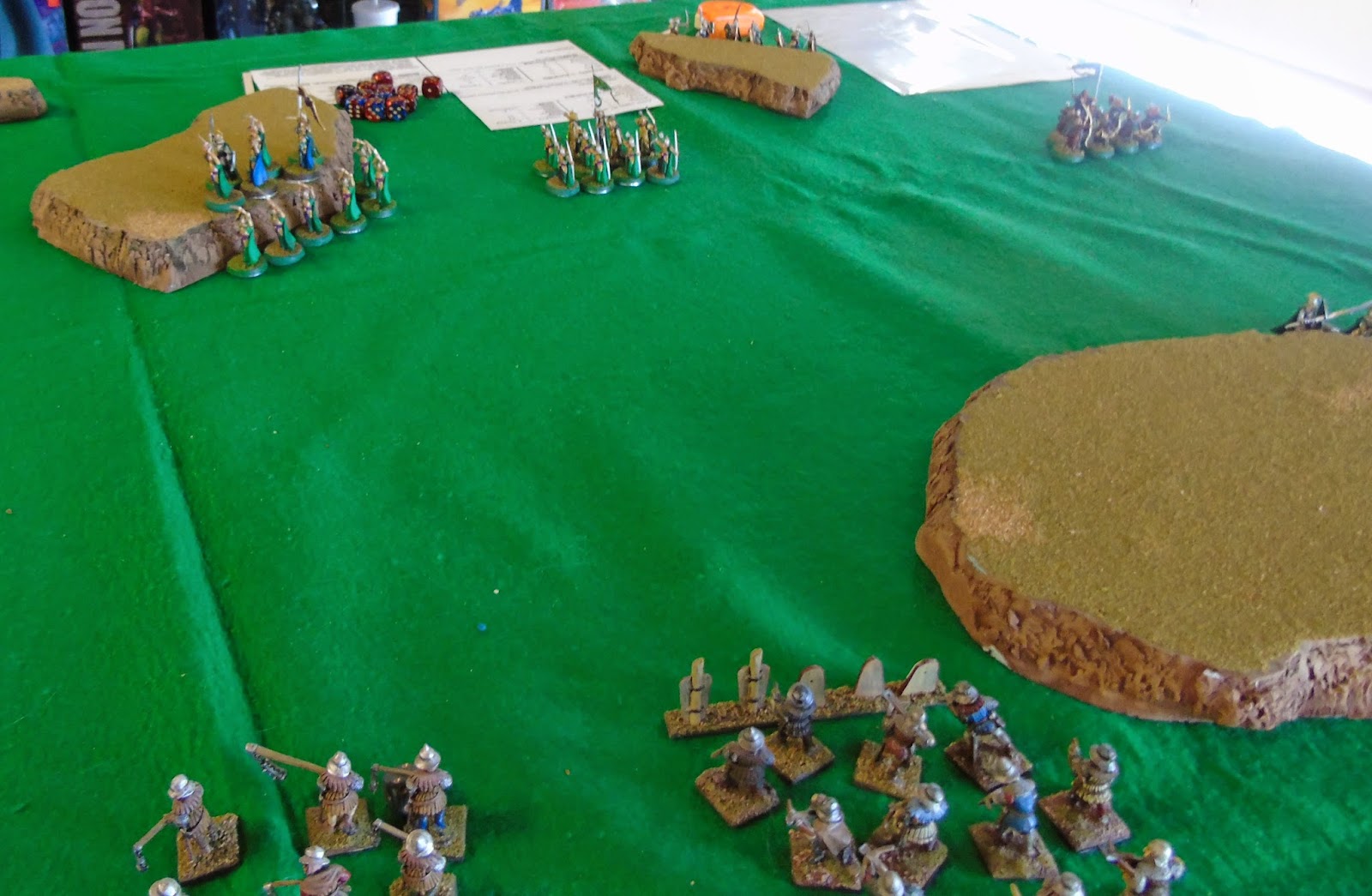 I foolishly charge the men-at-arms and lose a unit of billmen and the Burgundian general.  Luckily every unit of the human side passes morale. 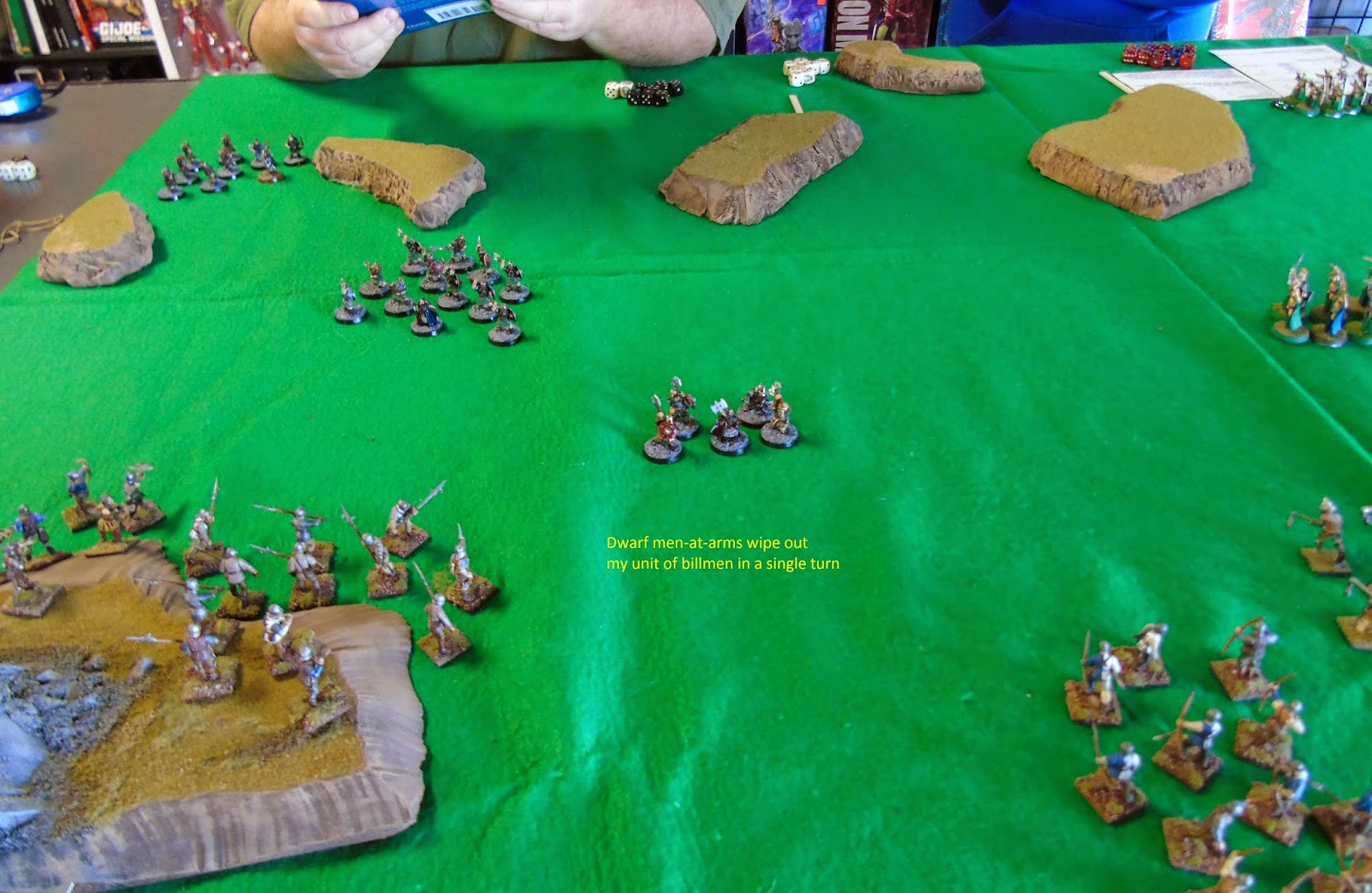 Elvish Sergeants about to charge the crossbows.  The pavise makes them almost as tough in battle and the elves fail, due to poor courage tests. 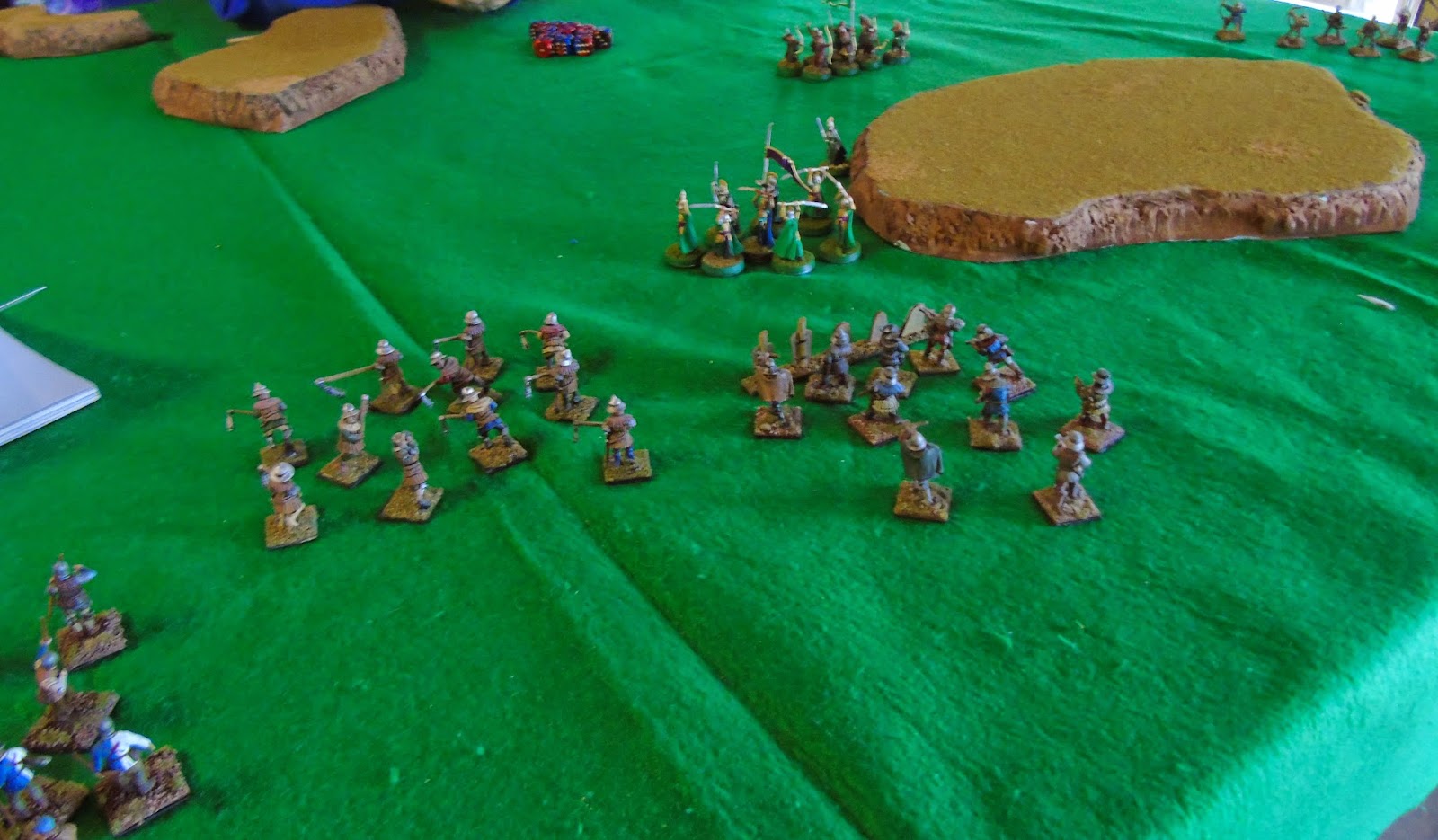 The dwarf men-at-arms charge my billmen I've place in rough terrain.  I forgot men-at-arms were ferocious.  Billmen run away and next turn dwarves wipe out a unit of bidowers.  Luckily for me my archers and crossbows have about shot to death the rest of the slow moving dwarf army. 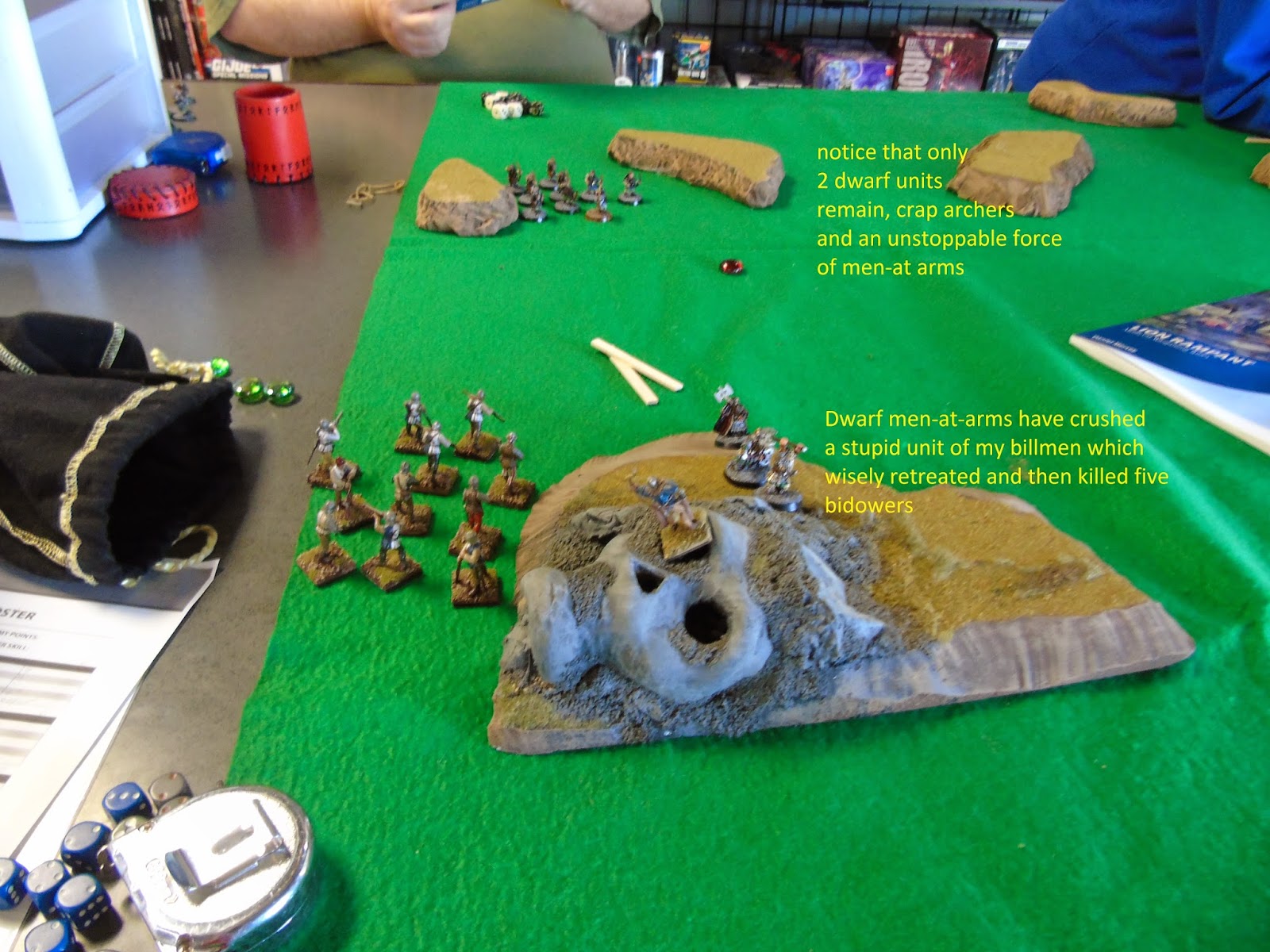 Shooting seems to win the day, at least without cavalry on the table.  There's only three beat up units of pointy ears and hairy short men on the table when the shooty humans have all but three units remaining. 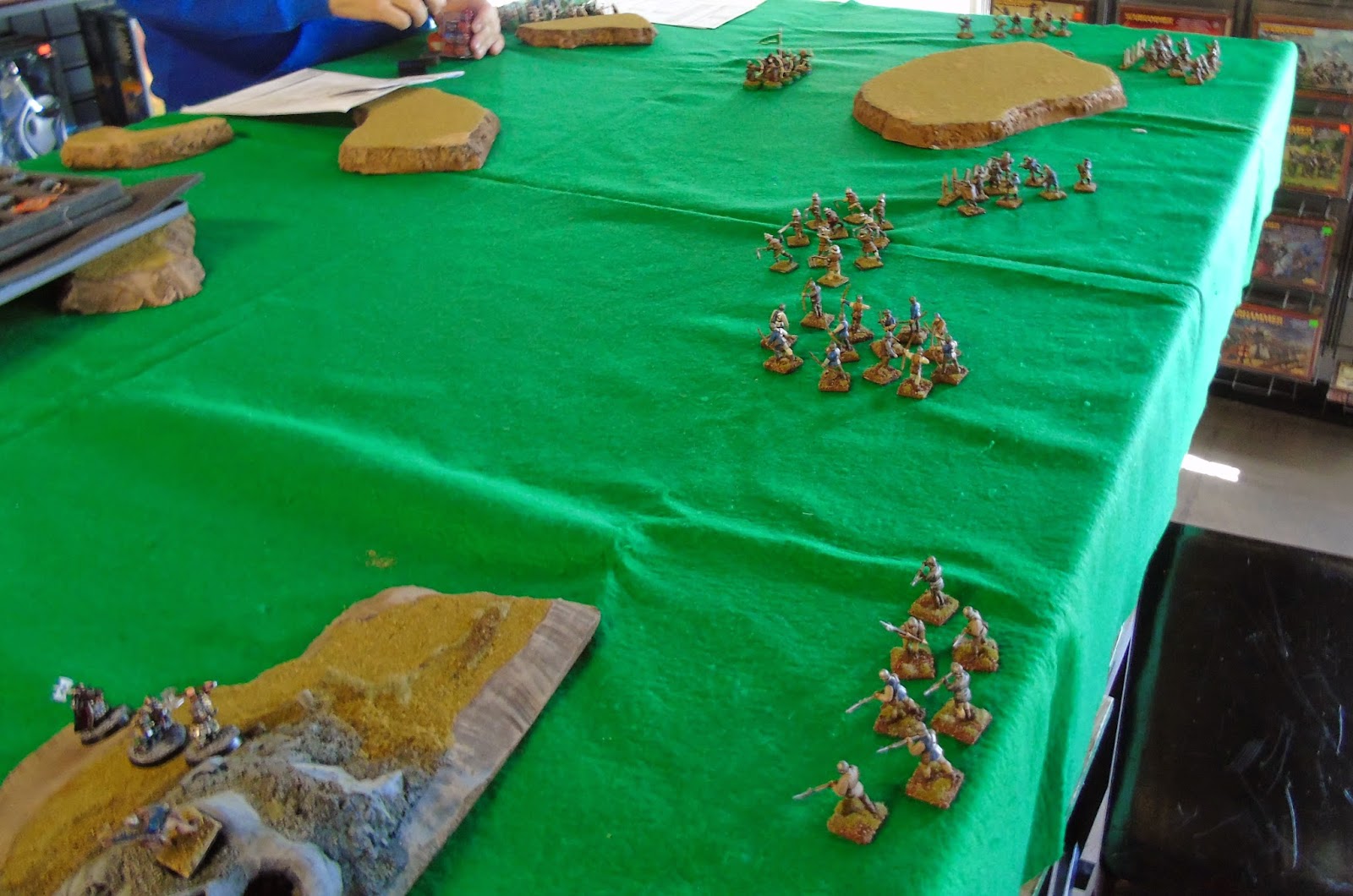 I think cavalry and using bidowers to screen men-at-arms will defeat a shooty army in Lion Rampant.  Archers lose to crossbows.  Hopefully the guys will want to play again.

I did manage to finish one guy in time for the post.  He's a drummer that I've been painting since November.  I keep making mistakes and repainting over the old paint.  This guy has so much paint on him, you could keep him in a box of pointy rocks for years and never see bare metal. 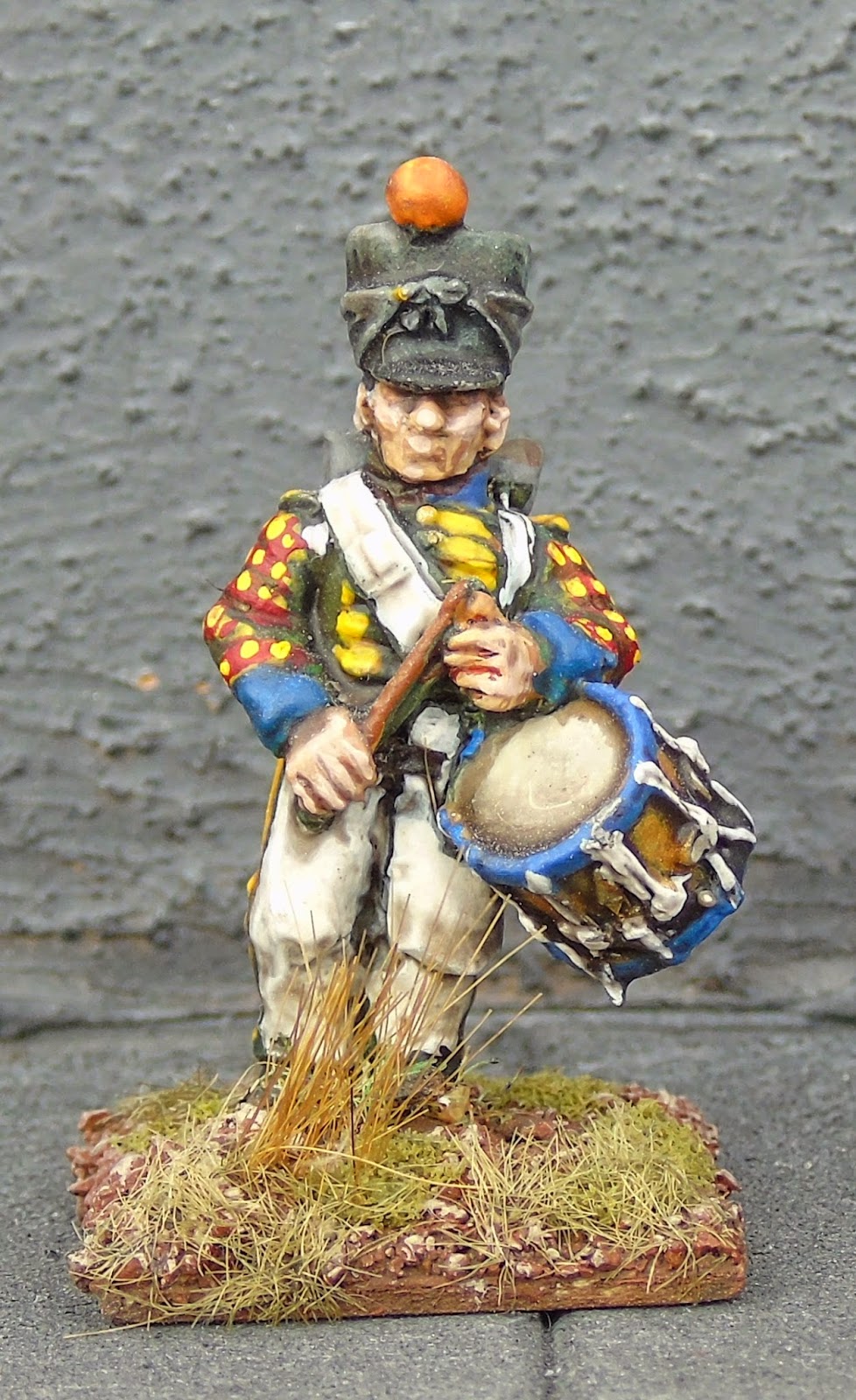 Till next time, when I promise billmen, French cavalry, and more.