It's been six weeks since I posted anything, but at least this time I'll show you 61 things I finished.. 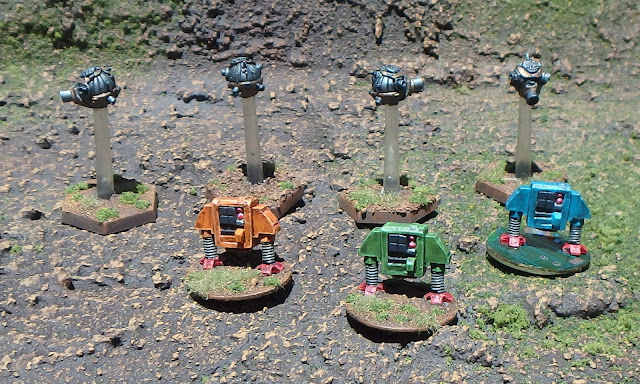 The three bots silently running are from Black Cat Bases.  I put one on a base made out of a circuit board, but it looks stupid. 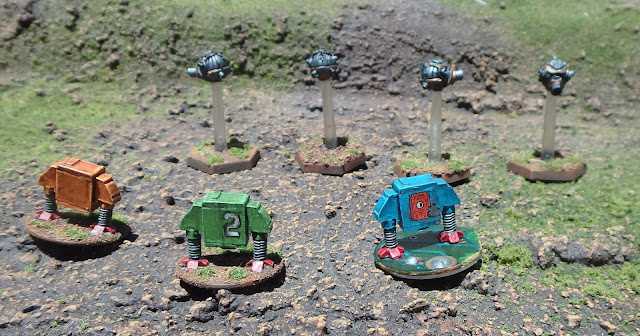 Speaking of Black Cat Bases, here are eight of their Deep Ones, from their lovely Lovecraft line. 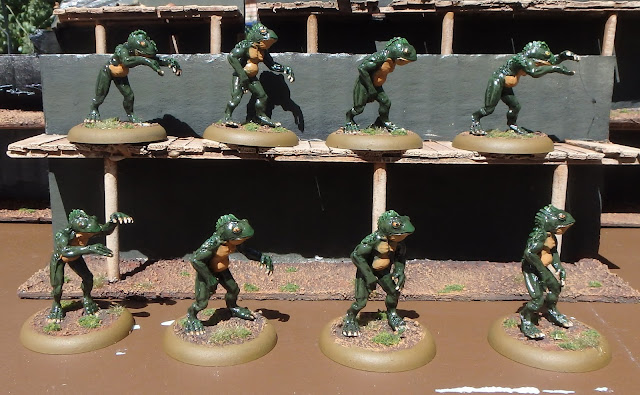 I loved painting these guys and want to paint more.  I know they are very shiney; I gloss coated them because Lovecraft described them as slick or slimey. 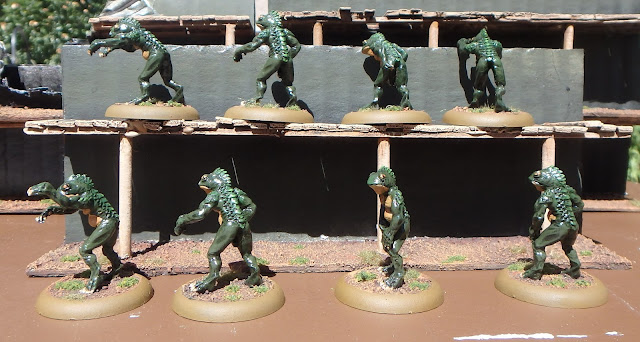 The deep ones were posing in front of some walls I made for the soon to be released Fallout Wasteland Warfare.  http://www.modiphius.com/fallout.html

In case a wall gets destroyed, I built a damaged one too.

It's simple cardboard, so I soaked it in glue to make the torn "metal" not move.

Oh dear, someone got caught in the minenwerfer explosion! 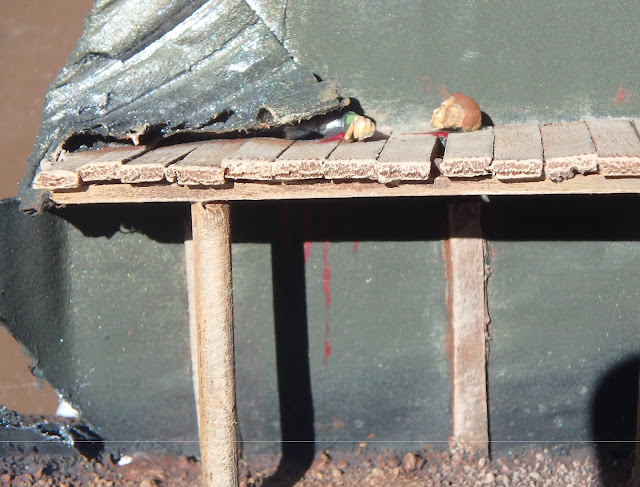 Here are some Prussians running around.  (Warlord)

Here they are running back for a thing they forgot.

Here they are wondering where the Prussians went.

Three more space marines in my quest to paint one of each legion. 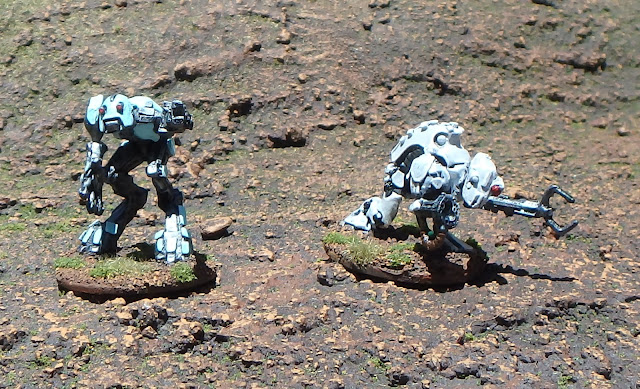 The blue one is named My Little Minenwerfer. 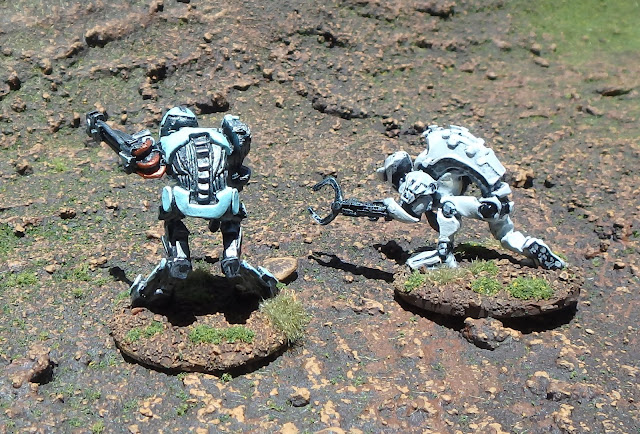 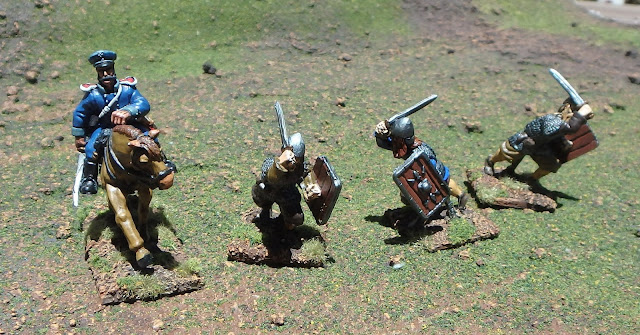 I secretly positioned the Rus at different angles; so you can't tell they're all the same model pose.

Here's a GW Adeptus Mechanicus boss of robots model; next to him is an old Mageknight model with a couple GW parts added. 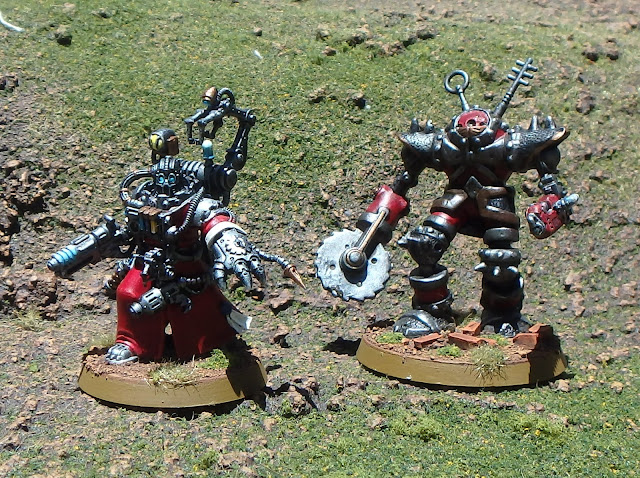 I spared every cost on the robot, his base is even an old broken one, held together with puppy love. 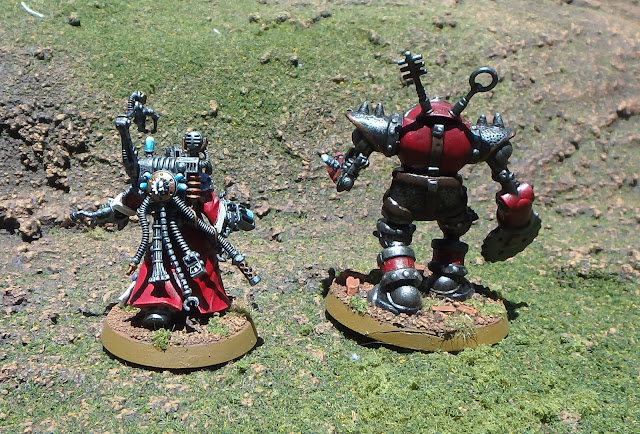 Four random models.  I have no clue who made the dwarf with a catapult on his back.  The barbarian is an old Citadel model.

I don't know who made the large medic, but he's been conscripted into my IG army.  The little IG guy is one of the worst IG sculpts from the Rogue Trader days.

Here's some random crap I glued to bases.  The brown stone is fossilized dinosaur bone; there must be a dinosaur graveyard buried in my yard.  They're chunks sliced off of larger pieces.

The green rock is a piece of Sonoran sunrise turquoise given to me by  Huitzilopochtli.  (Tournament Gamer secret:  smash several painted models before every battle, as a sacrifice to Huitzilopochtli and you always win; but never invite him to be a house guest (he leaves his socks under the couch and puts cheese in his coffee)). 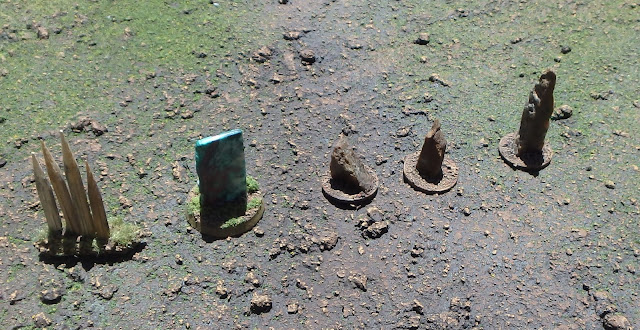 Almost everyone was posing on this 6' x 4' flexible game mat I made.  It's amazingly flexible and soft.

Well till next time my beloved Minenwerfers, when I'll have Polish Lancers, Prussians, robots, spacemen and only Huitzilopochtli knows what else.