My lovely wife misplaced and recently found the camera, so I decided it was a good time to post more useless information in my attempt to use up the internet and waste the time of my SIX (!!!!!) followers.  Yes six, that's right and I've been to five of their blogs and they all have great blogs.  One doesn't have a blog, but I'm sure it would be interesting if he did have a blog.  I know he has good taste or accidently hit follow.

Well I had seven followers, but one was actually a pornographer promoting websites.  In the name of friendly bloginess, I visited his some of blogs.  The material was very amatuer, had unattractive "performers", and the text wasn't in my English.  I sadly let my 7th follower go.

On another note I've been really trying to paint as many models as days of the year.  If you look to your right on my painting log, you can see I'm going to miss the target.  If I wasn't leaving the country (very soon) for seven months, I might be able to pull it off.  More importantly I need to pay attention to the family, finish up projects at work, and pack.  I doubt I'll do any painting while gone as the living arrangements don't allow for such frivolities.   I may post one or two times more this year, but after that I must bid anyone reading this a fond adieu.

Enough whining, here are 2 UNIT soldiers and their dashing officer and their abnormally large yet somewhat expressive melon head.  For those who are not fans of Dr Who, UNIT stands for United Nations Intelligence Task Force.  It should therefore be UNITF, or scrambled around UNFIT.  I would have called them the Fast Action Response Team (FART), but North Korea and Lithuania voted me down when I brought the matter to a vote.  Kim Jong Ill and Dalia Grybauskaite, YOU SHALL RUE THAT DAY!  The UNIT is some sort of UN military team only filled with British people who defend us humans from the paranormal or extraterrestrial.  Due to their extremely large heads and therefore thick skull, they do not wear helmets. 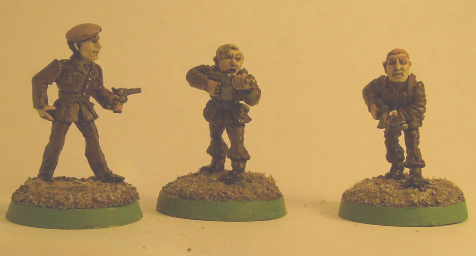 Here's six more Perry plastic British Line troops.  There were seven but one of the cats absconded with one.  He's lost so there's only six.  I lose more troops to family pets than I care to think about.  The ferrets wreak havoc on lower shelves when they break in; they can't resist knocking everyone over or occasionally stealing little men.  We used to have a St. Bernard that would wag her big fluffy tail and fling troops across the room to often be later stepped on.  We once had a cat who enjoyed chewing on pikes and spears. 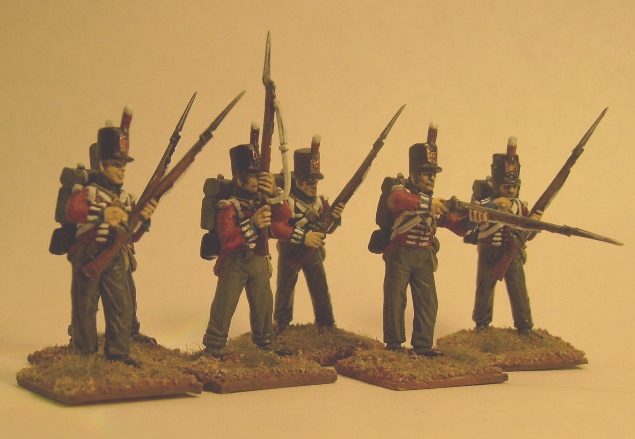 Next up an unfinished French Carabiner from a manufacturer whose name is lost to my memory.  If you know please do leave a comment.  The colors of the reins and straps are not decided, because I don't know the most correct colors.  And apparently the horse color is wrong, he should be black according to what I've read.  They quit wearing white or something about the time they lost all their black horses in Russia.  I have a small unit of these who are in terrible condition and painted really really badly.  I have sworn to fix and repaint them all before I buy the Perry ones and place these back in box to be badly damaged again. 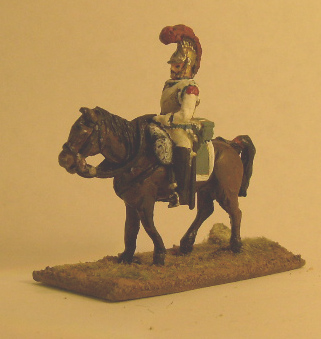 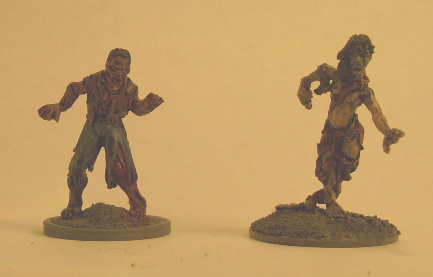 Now here are seven truly atrociously painted mediocrely sculpted zombies from Wargames Factory.  Ok, the sculpts aren't that bad, except for the flash and lack of detail.  I just hate assembling them.  On second thought they really aren't that well sculpted, and I don't have to be a talented sculptor to notice bad sculpting.  Also, there's something about the plastic that causes my always reliable Superglue to not work that well.  Oh, and the necks are huge.  I didn't assemble these, my favorite son did, in my plans to create zombie horde diversity.  Strength through diversity!  I did chop a few up to make creepy crawling zombies.  I really do like Wargames Factory and their products and from what I've heard their great customer support, but I hate their zombies. 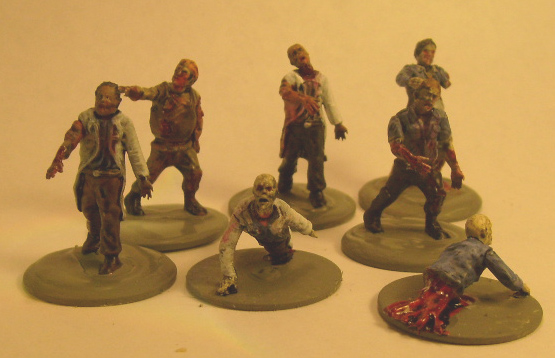 Here's a Mega Miniature Crossbowmen of unknown citizenship.  He and about eight identical clones came in a pack of manlets I bought.  I tried to give all his fellow crossbowmen away, but no one will take them.  Comment if you'd like them, give me your email, and I'll mail them to you.  I don't like duplicates. 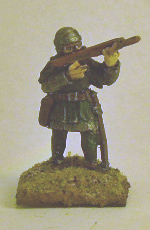 Here is a 40K ork (orc with a k is how you write orc in the future) that I'm painting for my boy in return for going through the pain of assembling the nasty little zombies.  He's almost done, but I figured I better take a picture now before the beautiful wife loses the camera again. 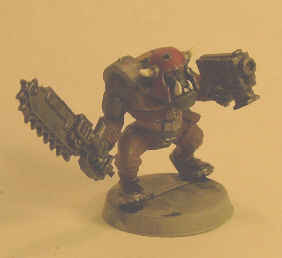 To finish on a boring note, I've been flocking parts of a trench table I've been working on and may never finish.  I decided to put liquid in the craters and failed miserably.  I put in a blackish ink mix and it looks terrible.  I'll fix it and try a lighter colored fluid. 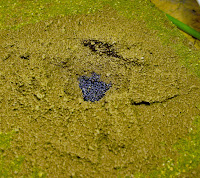 Next time I post I hope to show you some minor Global War on Terror Lego work I've been doing, as well as a  zombie apocalypse survivor, and some Cobra troopers.   I am easily distracted and promise nothing.

Merry Christmas if you like Christmas.  I hope the wife gets me some toy army men and I hope yours gets you some too.

Love, Hugs, and Kisses,
Baconfat
Posted by Baconfat at 9:08 PM