I've sloppily slapped together a bunch of a miniature goodness and took pictures.  As always everything  I paint looks shiney thanks to my stupid camera.

Germans carrying various ammo cans/drums.  I like to pretend they're lunch boxes.

I've played Strange Aeons with friends and therefore decided to paint some old Grenadier brand Cthulhu adventurers.  THEY ARE NOT SHINEY IN REAL LIFE.    The second from the right, is maybe a Ral Partha Shadowrun model, the short trench coat with leggings and straps around the forearms are ridiculous.  Last is a Grenadier Innsmouth resident I believe, big mouth and a lack of decent nose.

Here's my first attempt at making brick road bases out of Milliput.  If you get drunk and squint they look really really good.

Here's a couple old Citadel models.  I forgot to look for a date stamp on the dwarf and I think the human is from their old D&D line. 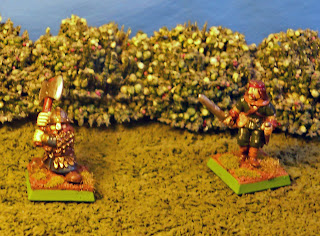 Lastly some Sculpey clay rubbish:  a battered refrigerator, some garbage bags, a couple stuffed animals, and a couch.  The couch is looks small next to the bald man with dumb looking pistol and brief case, because he's a Mr. Green from my kids' Clue board game and he's about 32 mm high.  I repainted him so they won't catch on to my thievery.

Till next time, when I hope to have more dull gray Germans and rubbish.