I have been preparing for the 5th Analogue Painting Challenge and have been assembling hordes of plastic minis.  Despite having accidentally cut off several fingers and super-gluing the remainder completely together, I've managed to complete a few models for your viewing pleasure.

This is a Perry Prussian 7" Howitzer.  The models were designed to be posed with the piece, so my separate basing technique was not the best choice. 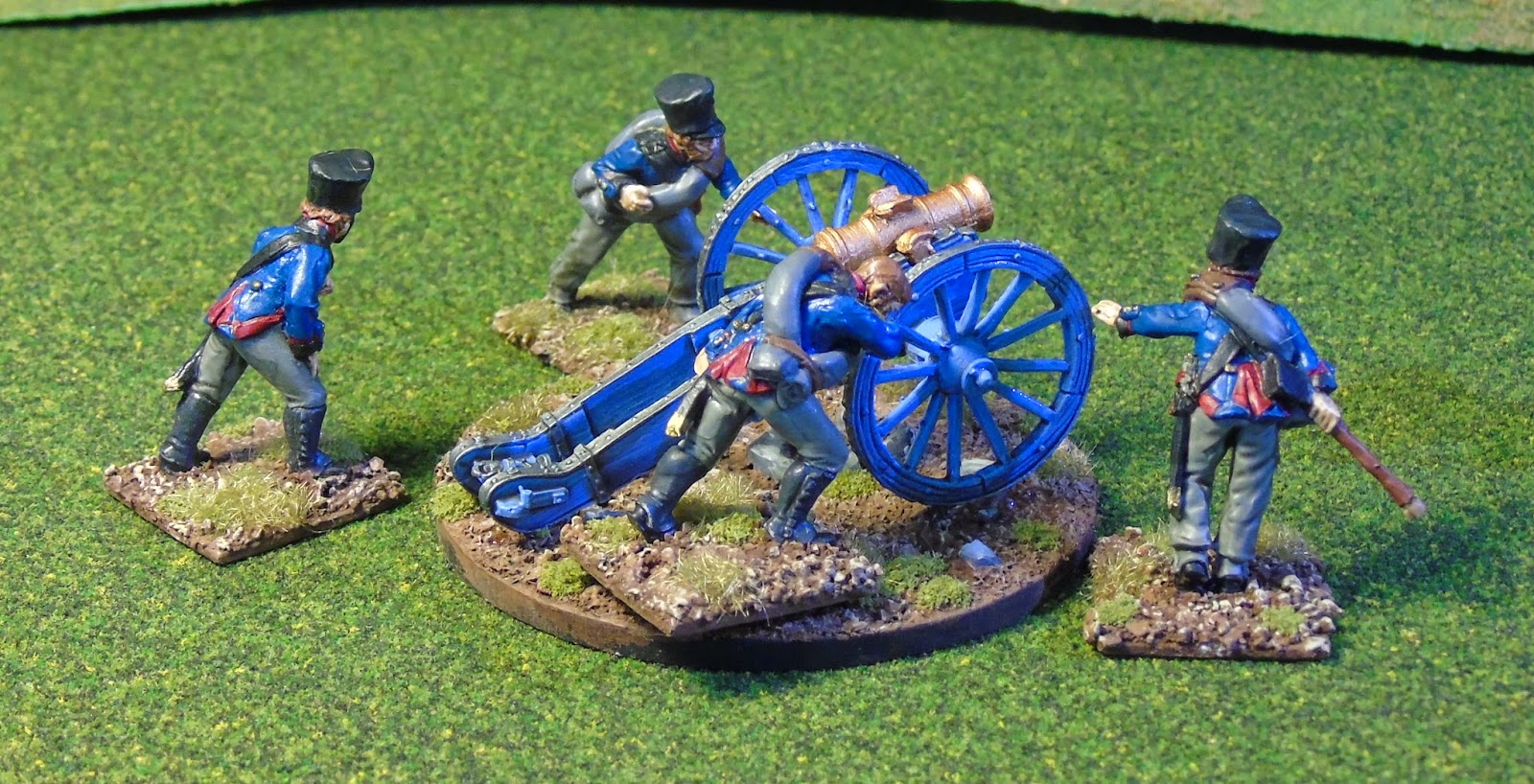 Here's another Prussian 7" Howitzer.  The Perry Brothers produce two different Prussian Howitzer crews, so I had to have both. 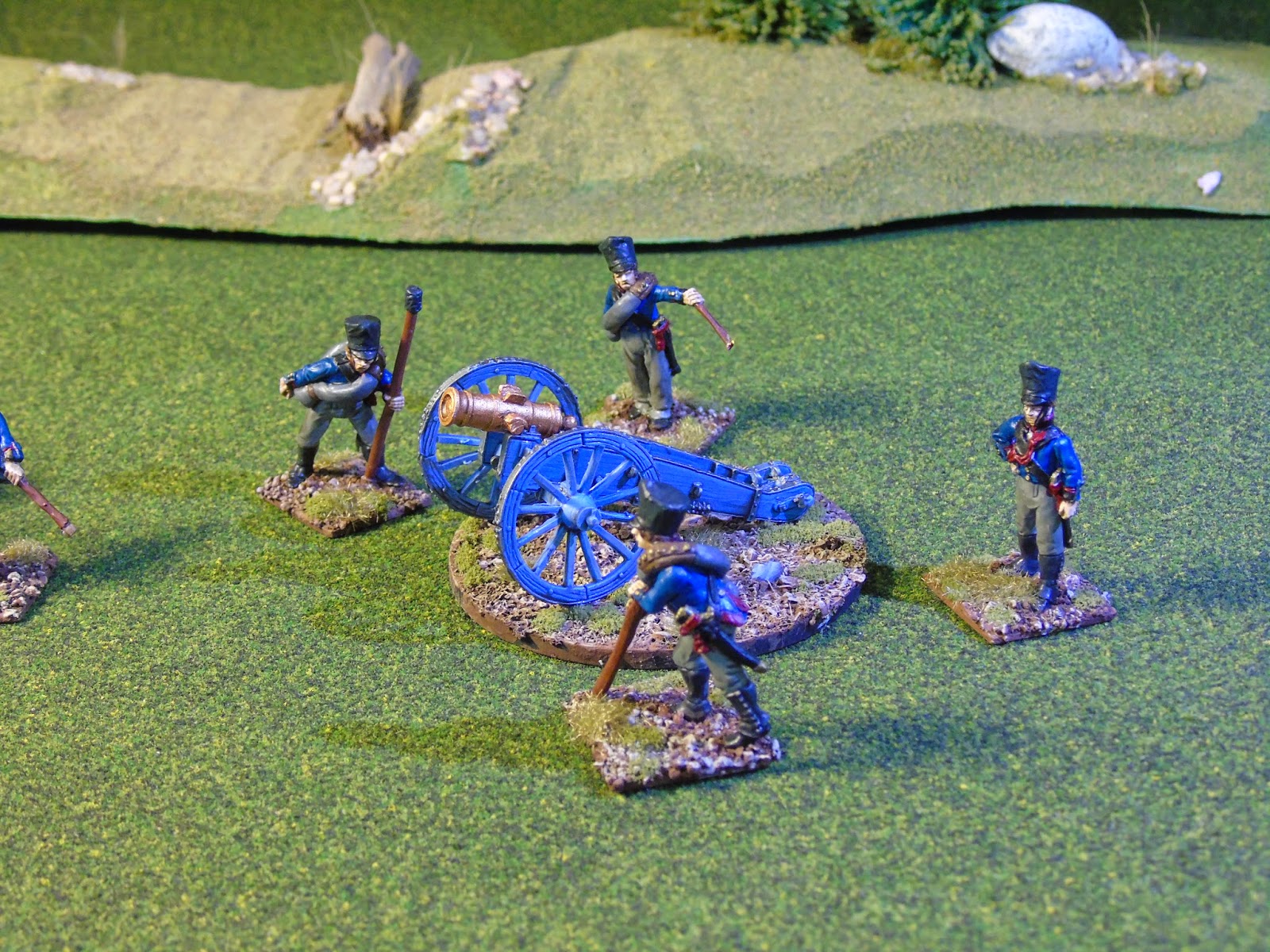 Here's all the guys lined up.

Here's a French Howitzer, I think it's a 5.5" model, but I honestly can't remember what I bought. 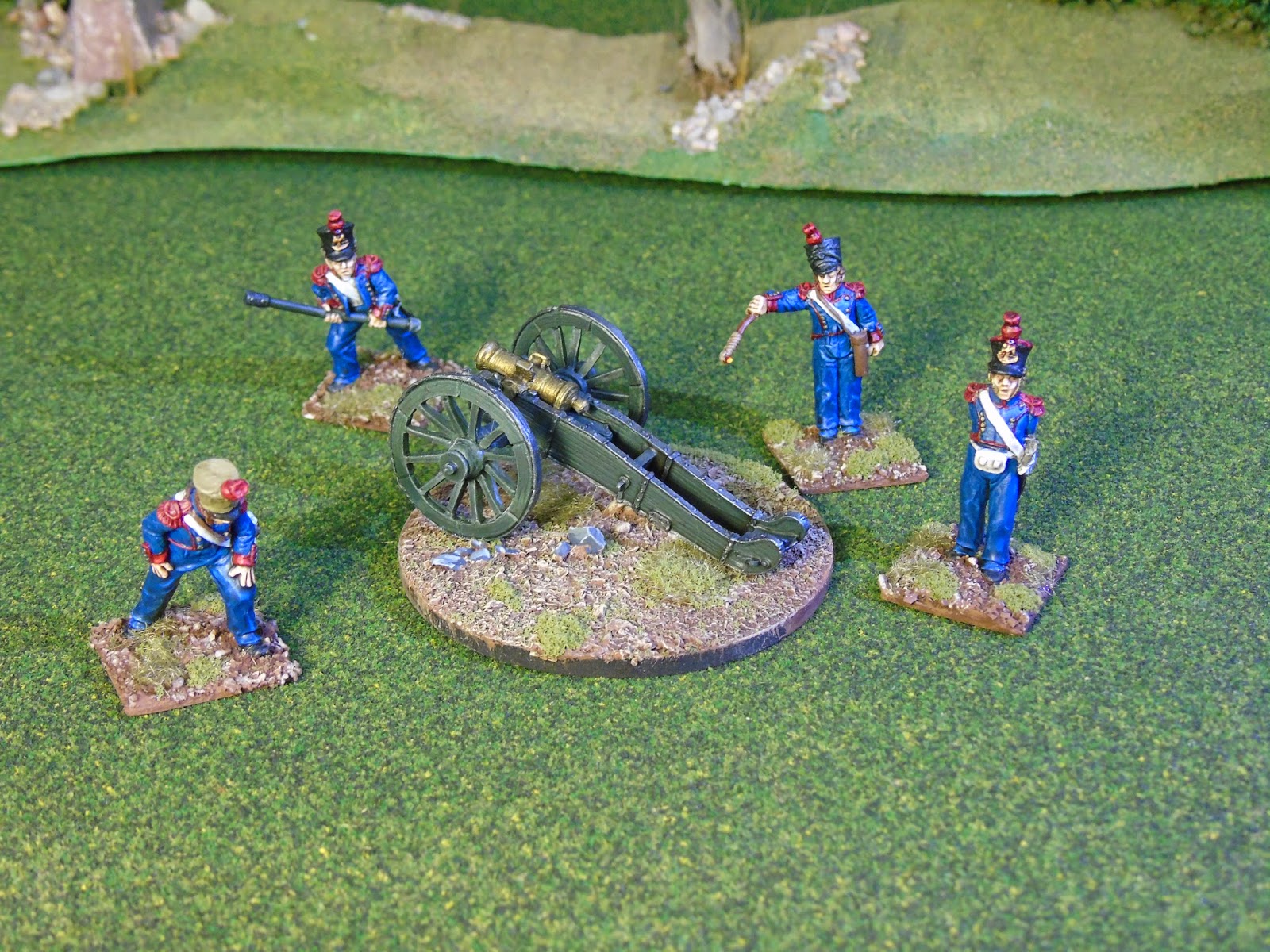 Here's all my French artillery models.

I actually have more, but they're ancient models.  You can see they don't look quite right next to the modern Perry sculpt. 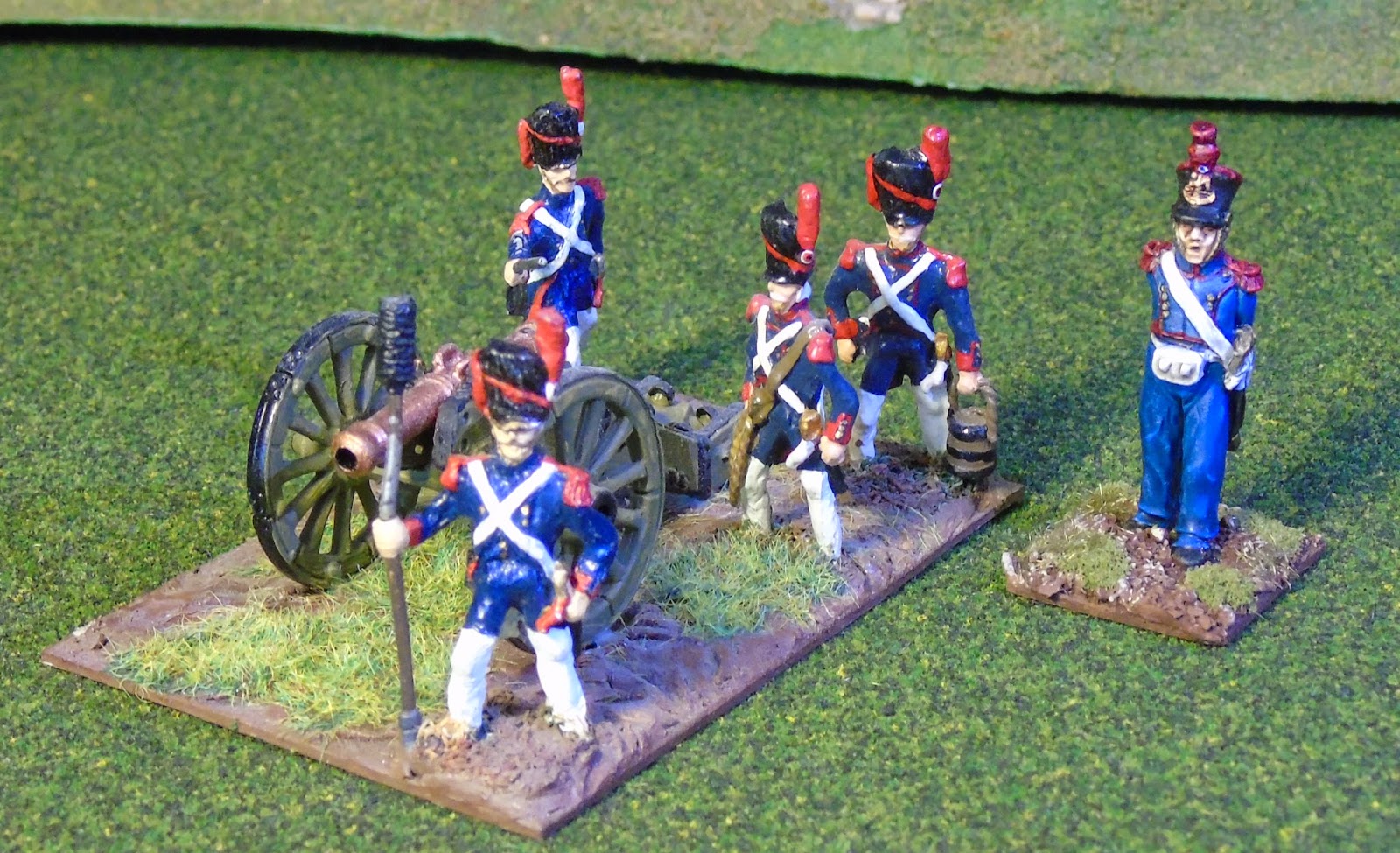 I lined up what I think is all my Prussian guns.  Eight should be enough for small scale skirmish gaming.  Though I need a Prussian twelve pounder for the group.

Whoops, completed one last model.  I keep spare troops on the table to soak up spilled paint.  This guy who used up a Vallejo volcano of Gunmetal, is an late medieval Old Glory Black Army Armored Infantry (DIF-16) model. 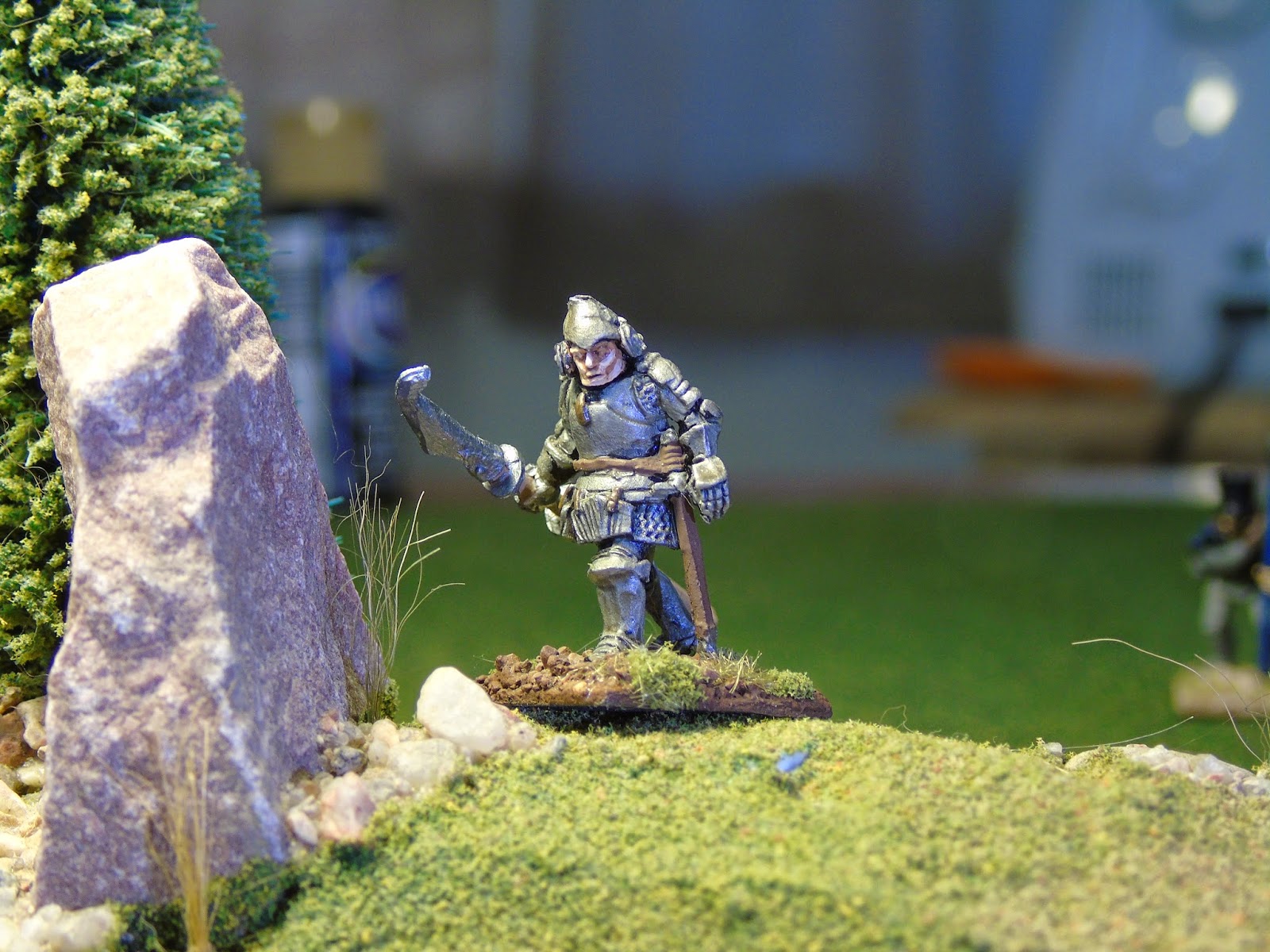 Now on to the action!   The Raid of Bennington!  The rules are the both fun and free ""Sons of Liberty".   The master of ceremonies was the terrific gamer Dave, the man who owns more trees than the rest of us put together.

The table was mostly forest (heavy and light), rough hills, a river, some hardened cabins, a mill, and a large redoubt filled to the brim with cowardly Brunswickers. 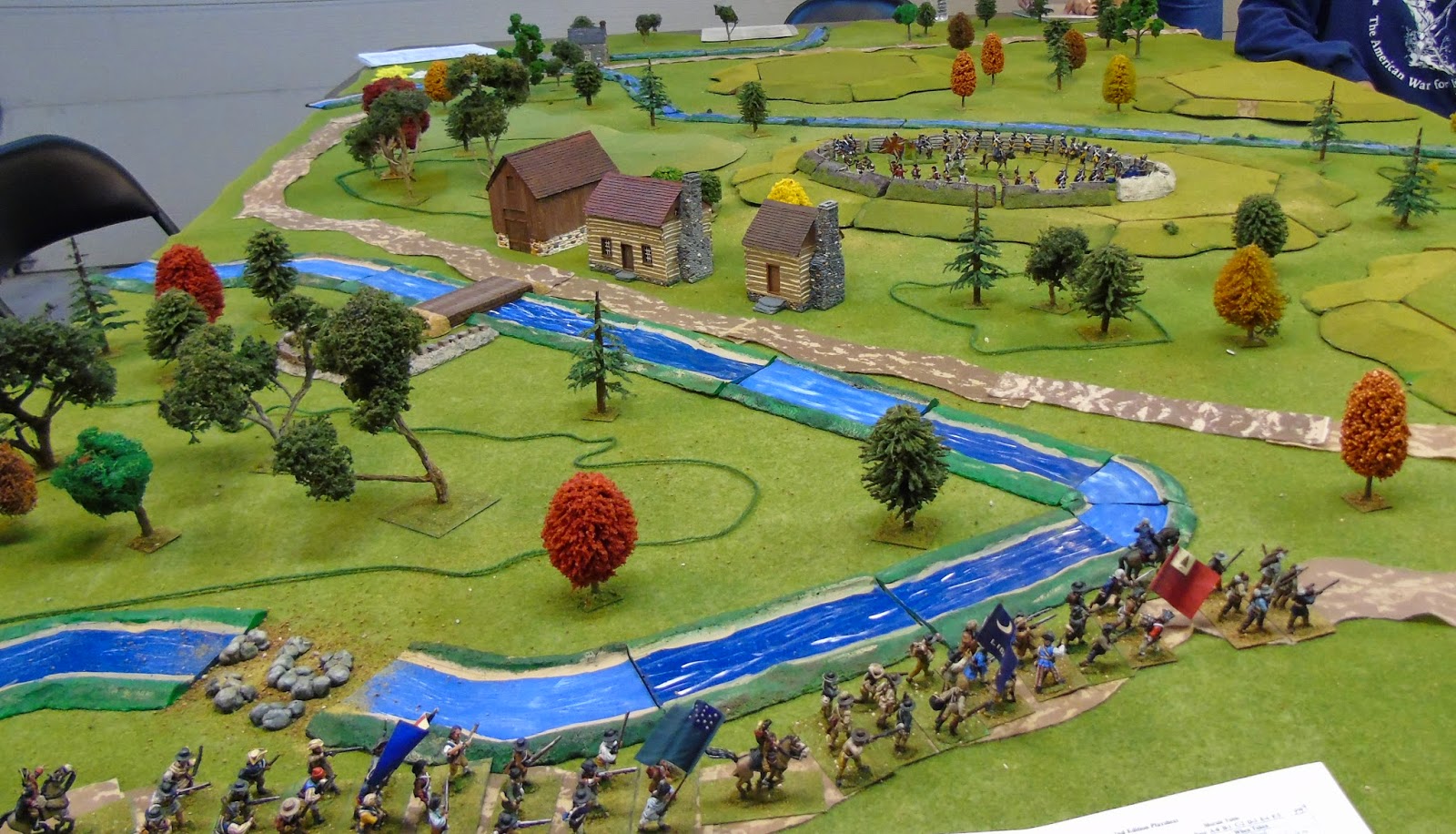 Here's a close up of the foul nest of evil Brunswickers. 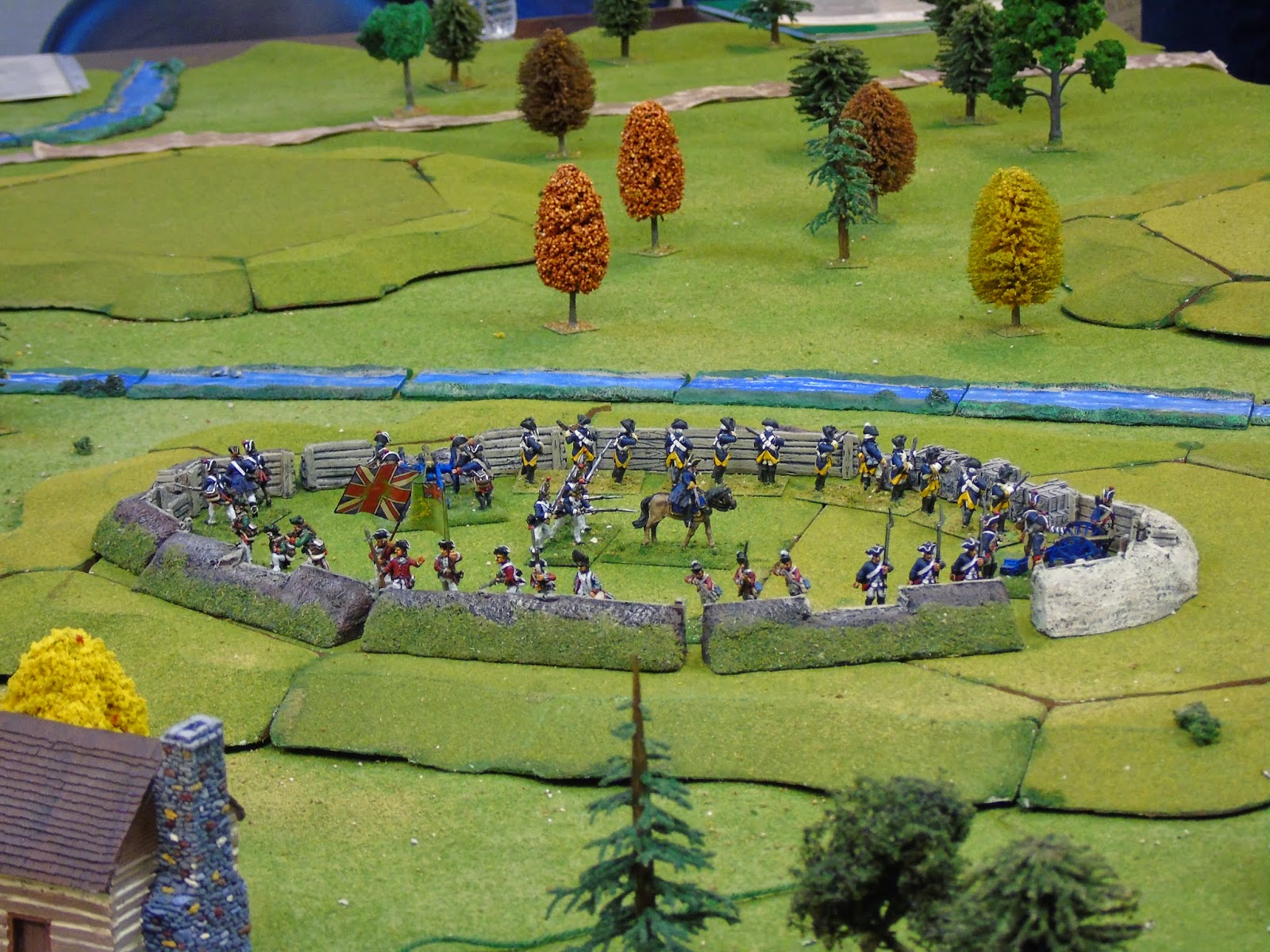 Here's the cabins and a small rat pack of nicely painted loyalist scum.  Why did the villains leave them out "alone" as sacrificial lambs? 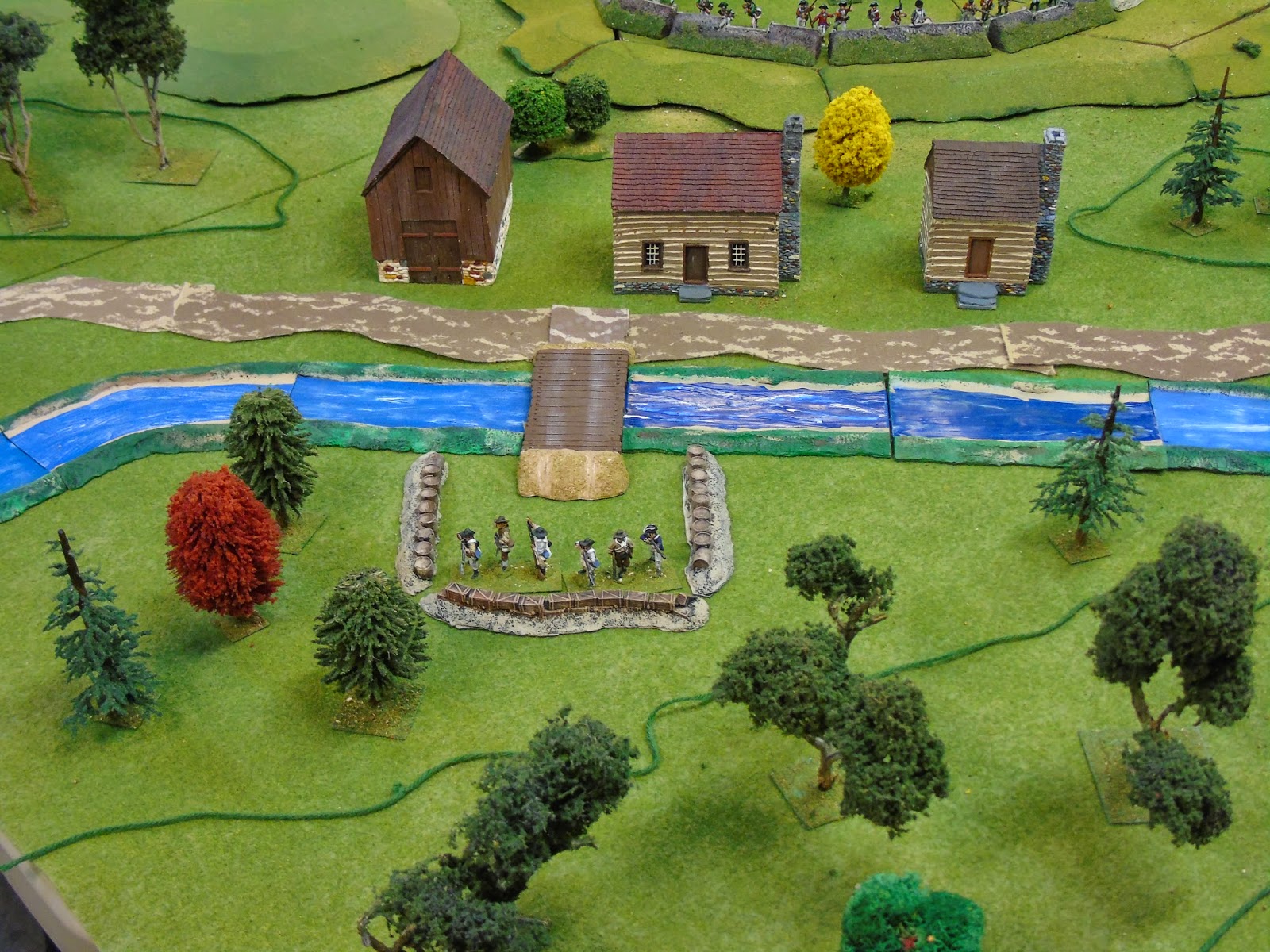 Recon over, we march to do God's work and clear the country side of evil. 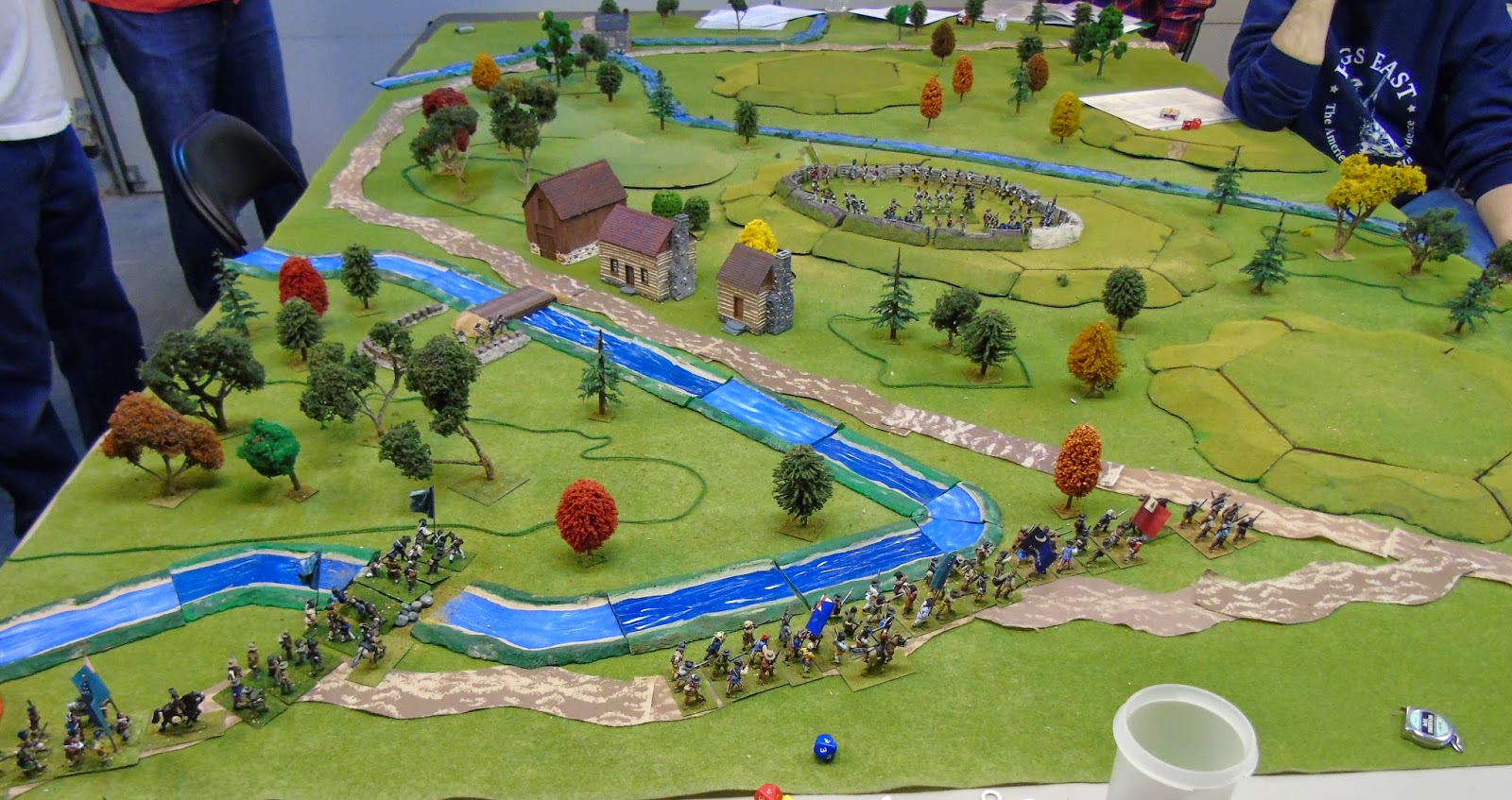 We advance all over the place.  Those dirty loyalists are starting to shake in their foul boots as we bravely march forward. 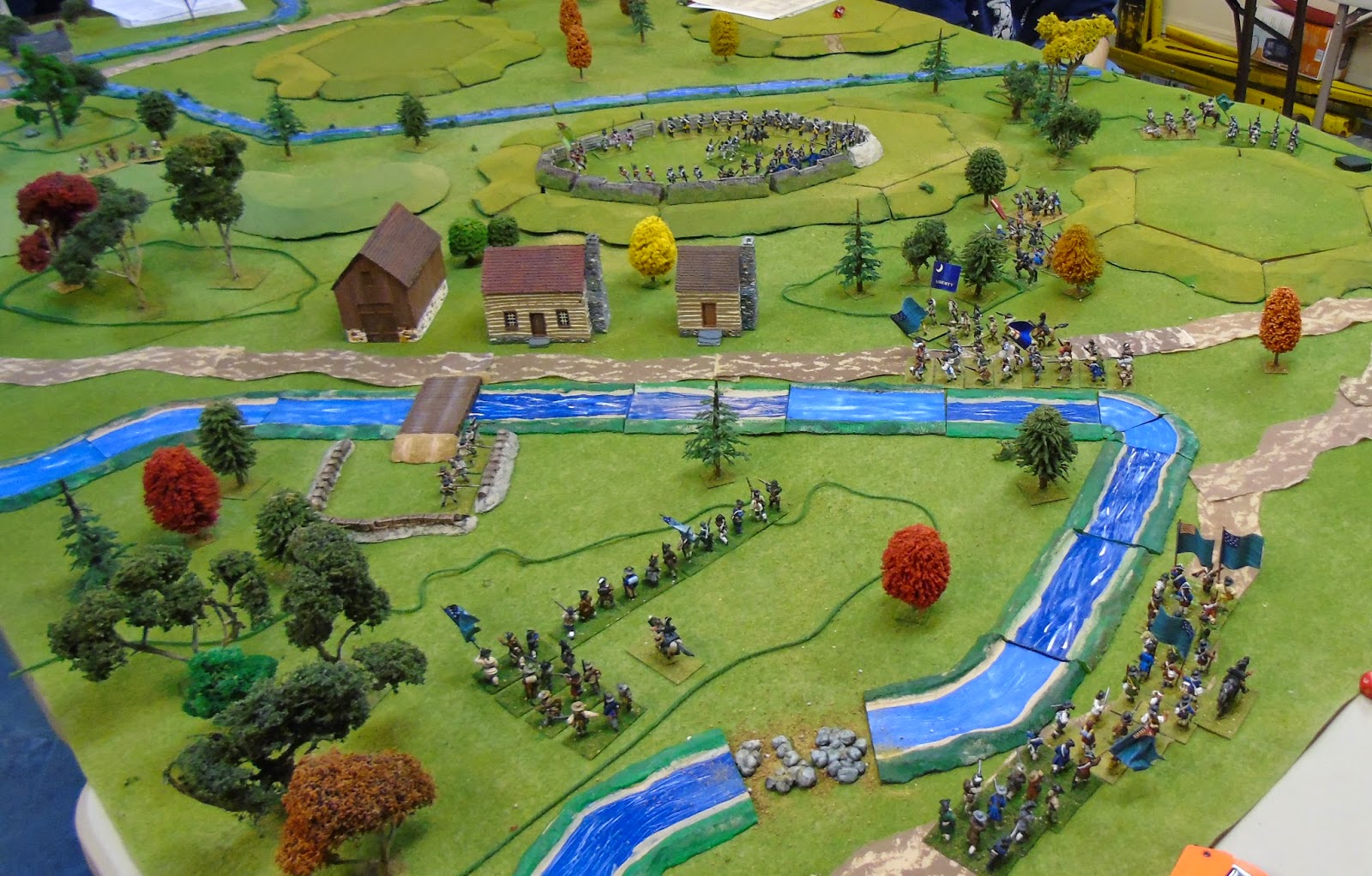 Oh goody, look how well we advance.  They villains should surrender now, the day shall surely be ours. 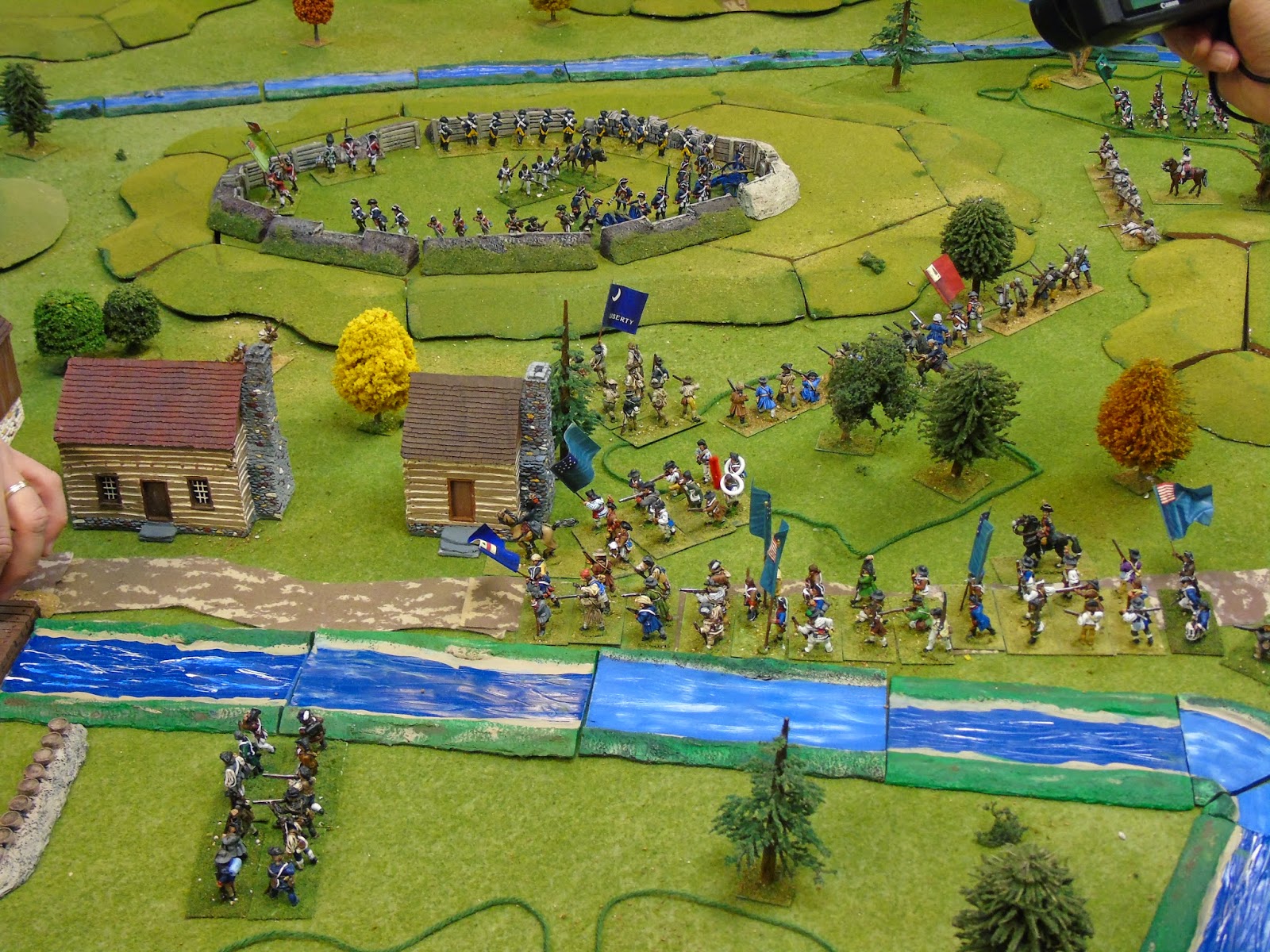 We continue in proud columns towards the cabin, where we will swing around and surround the viper pit of a redoubt.  Just look at the puny loyalist panic and get stuck on their silly bridge, due to terrible movement. 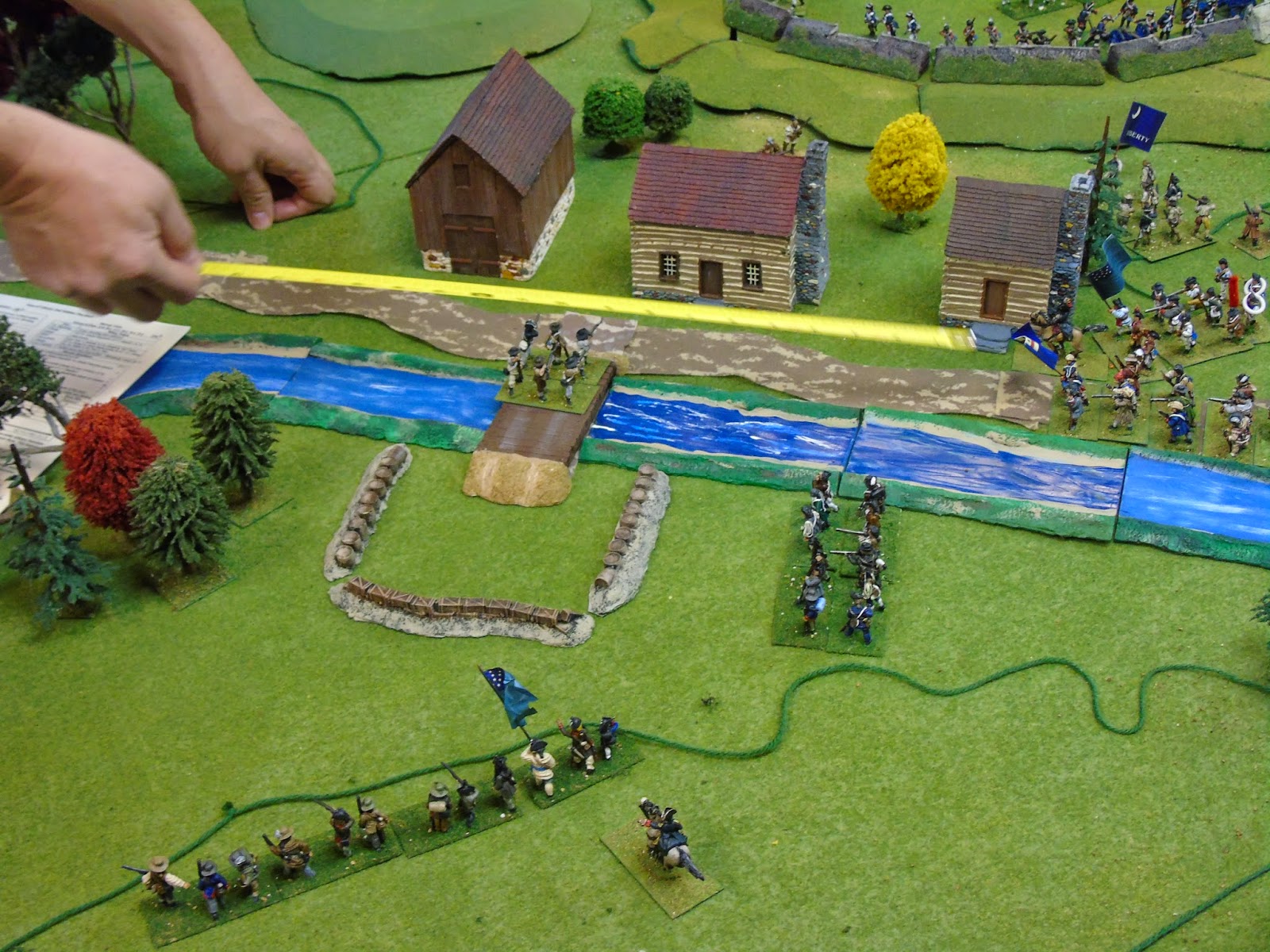 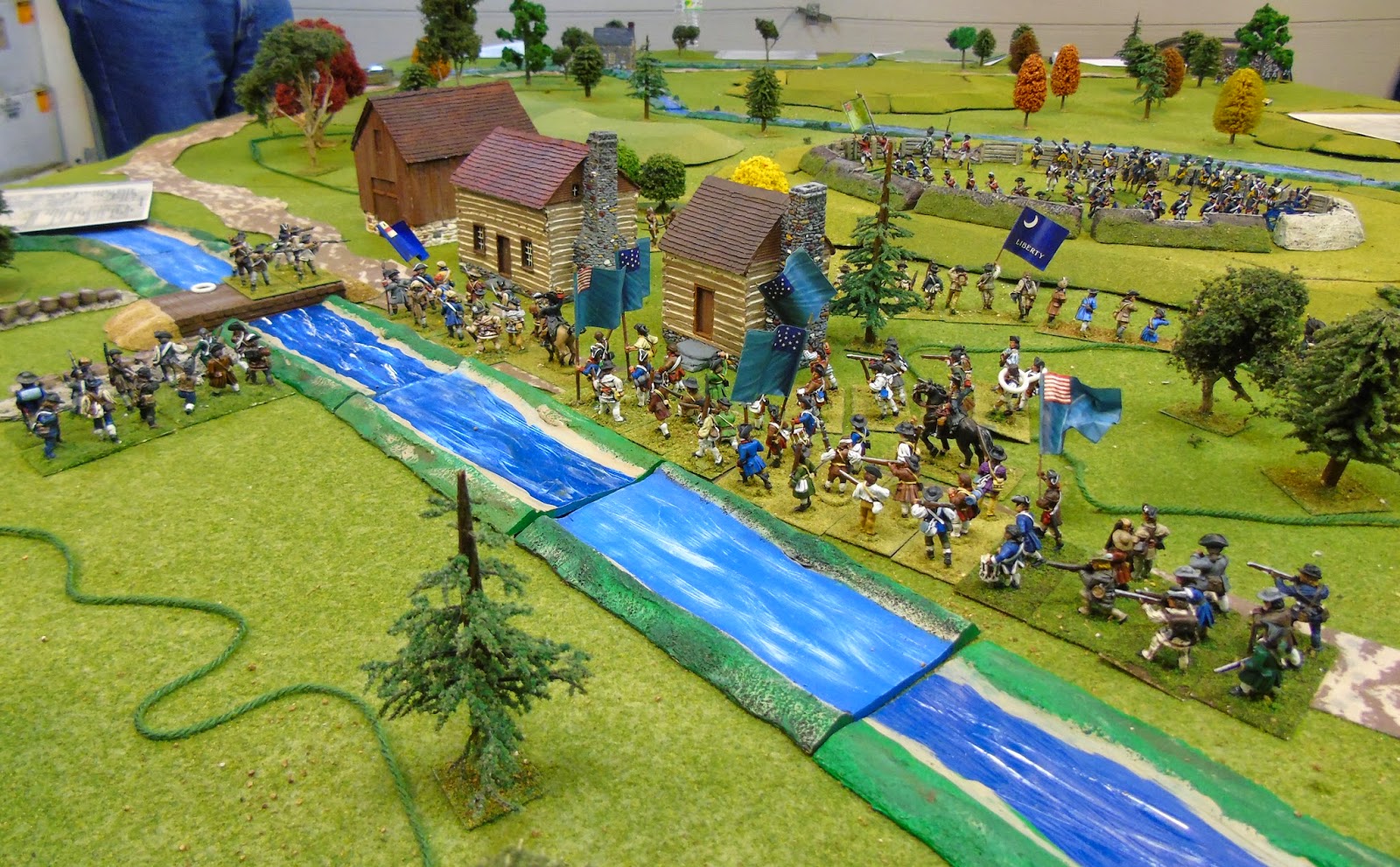 Everything turns to poop.  The cabins reek of bacon, Canadian Bacon!  They're full of Canadians!  We charge all the hardened cabins and fail to take them, take heavy casualties, and a fourth of our valiant army falls back. 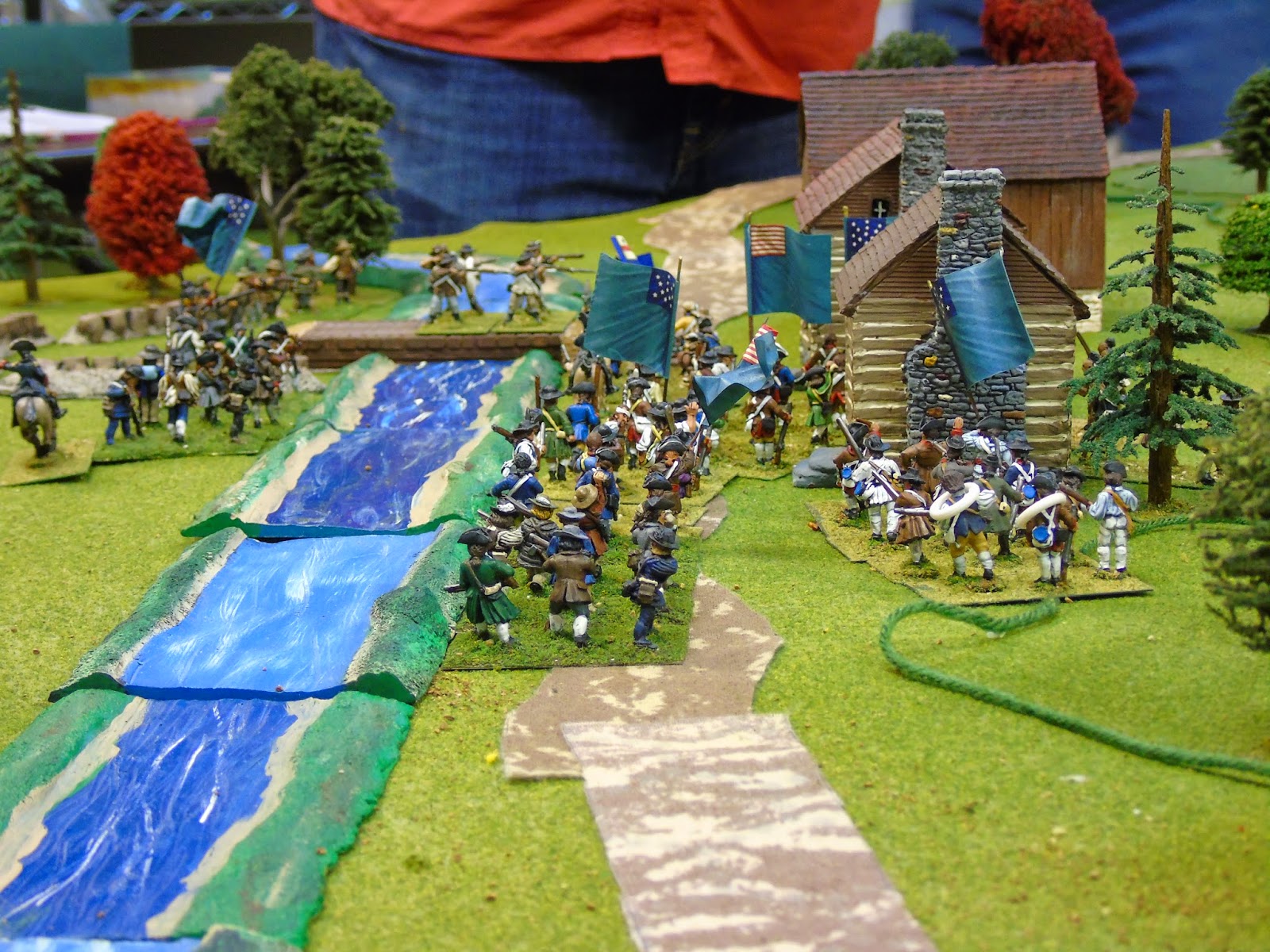 Well, half the force decides well take the redoubt by ourselves, while the other half is mired by the cabins. 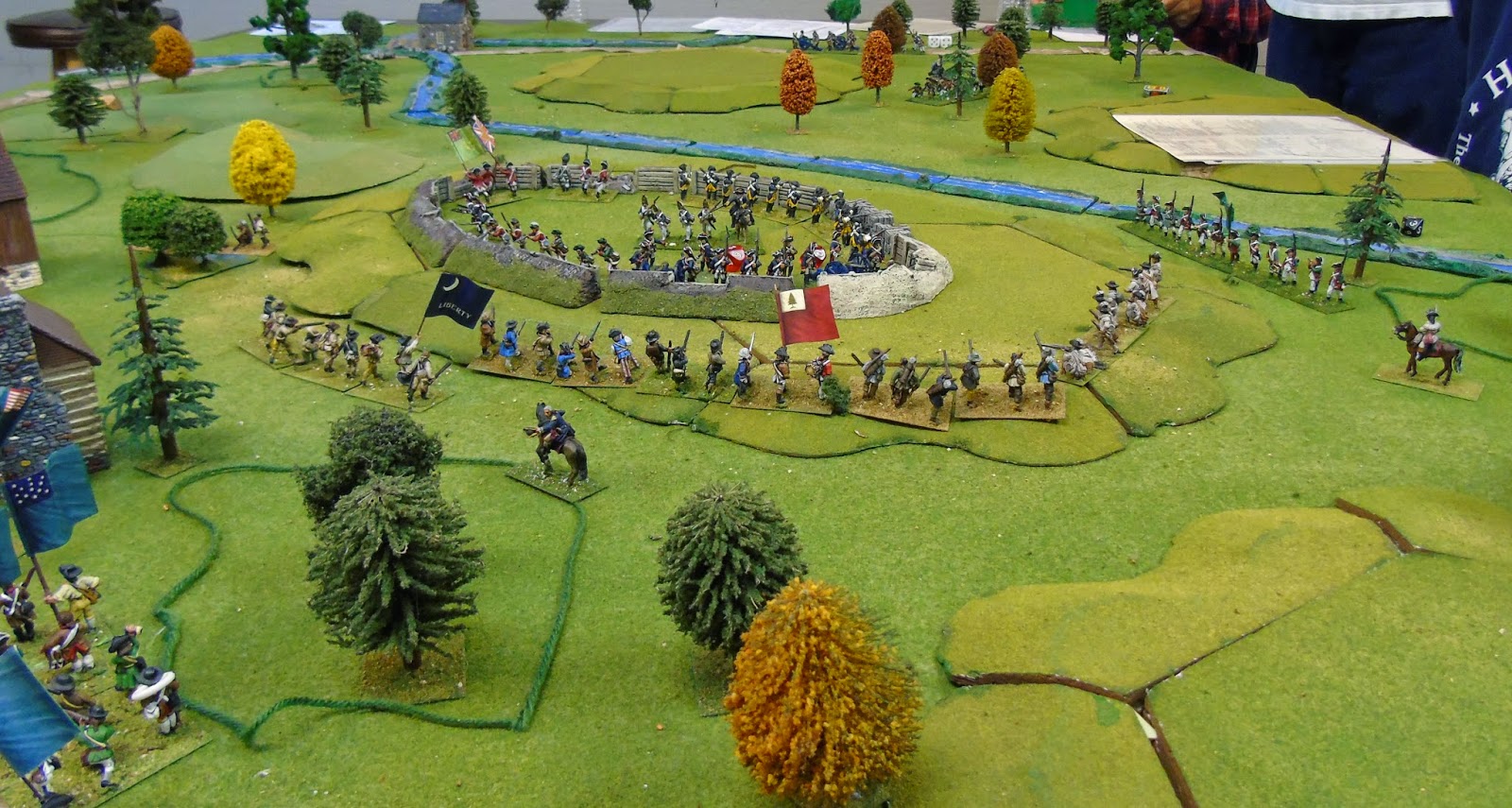 It doesn't go well, militia is terrible at taking redoubts.  Then some Mohawk Indians show up and frighten off one of my units, completely off the table.  At least my proud Indian warriors convince some gunners to evade their cannon.  (PS, the only rule I dislike in Sons of Liberty is how easily gunners can shoot and evade.  You can't catch and kill the bastards without cavalry).  We should have waited on the redoubt to our fellows wipe out the Canadians and advance together. 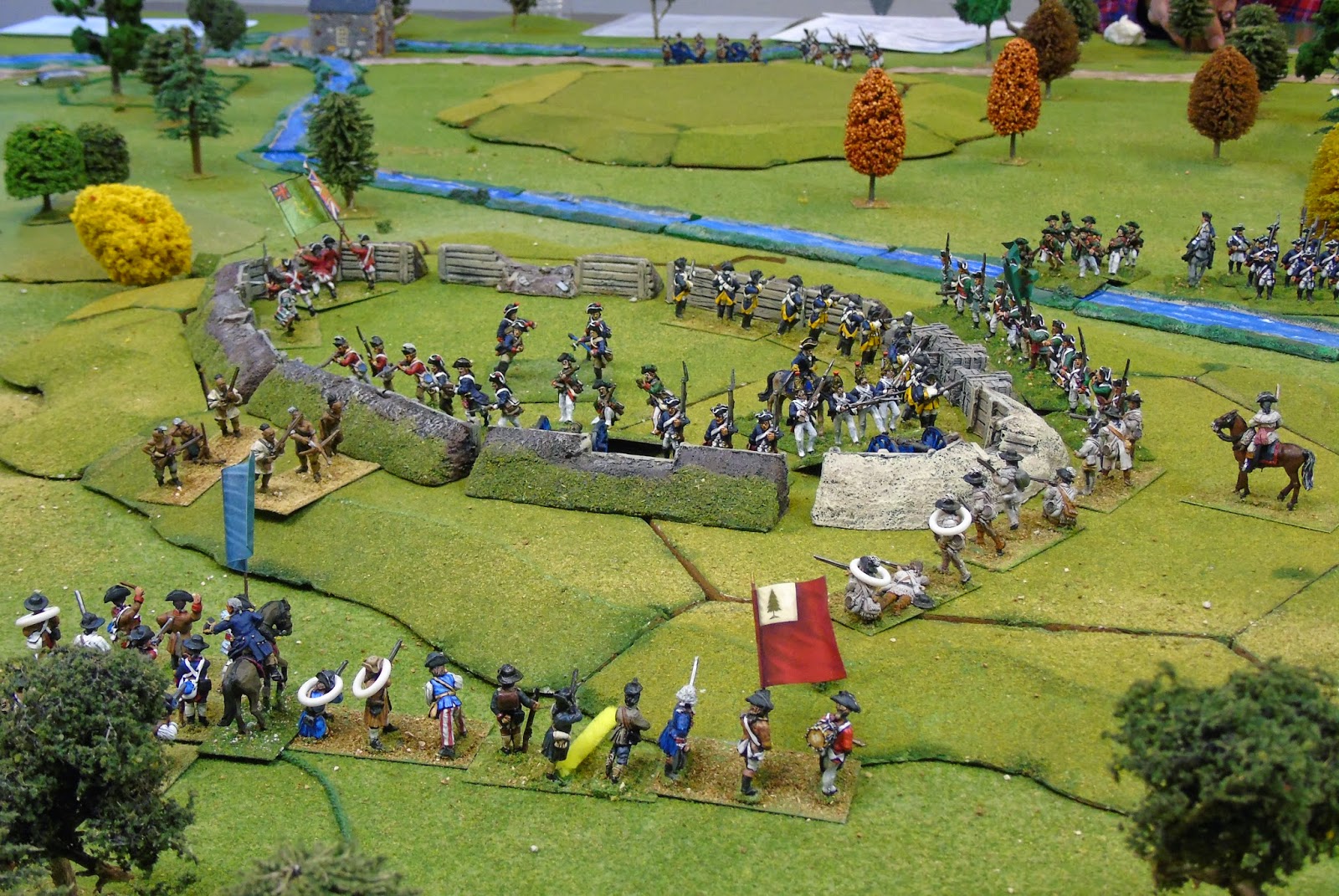 Oh terrific, the gates of hell have opened and spit out more satan spawned Brunswickers.  See the beasts crossing the stream.  On top there's artillery showing up on the road. 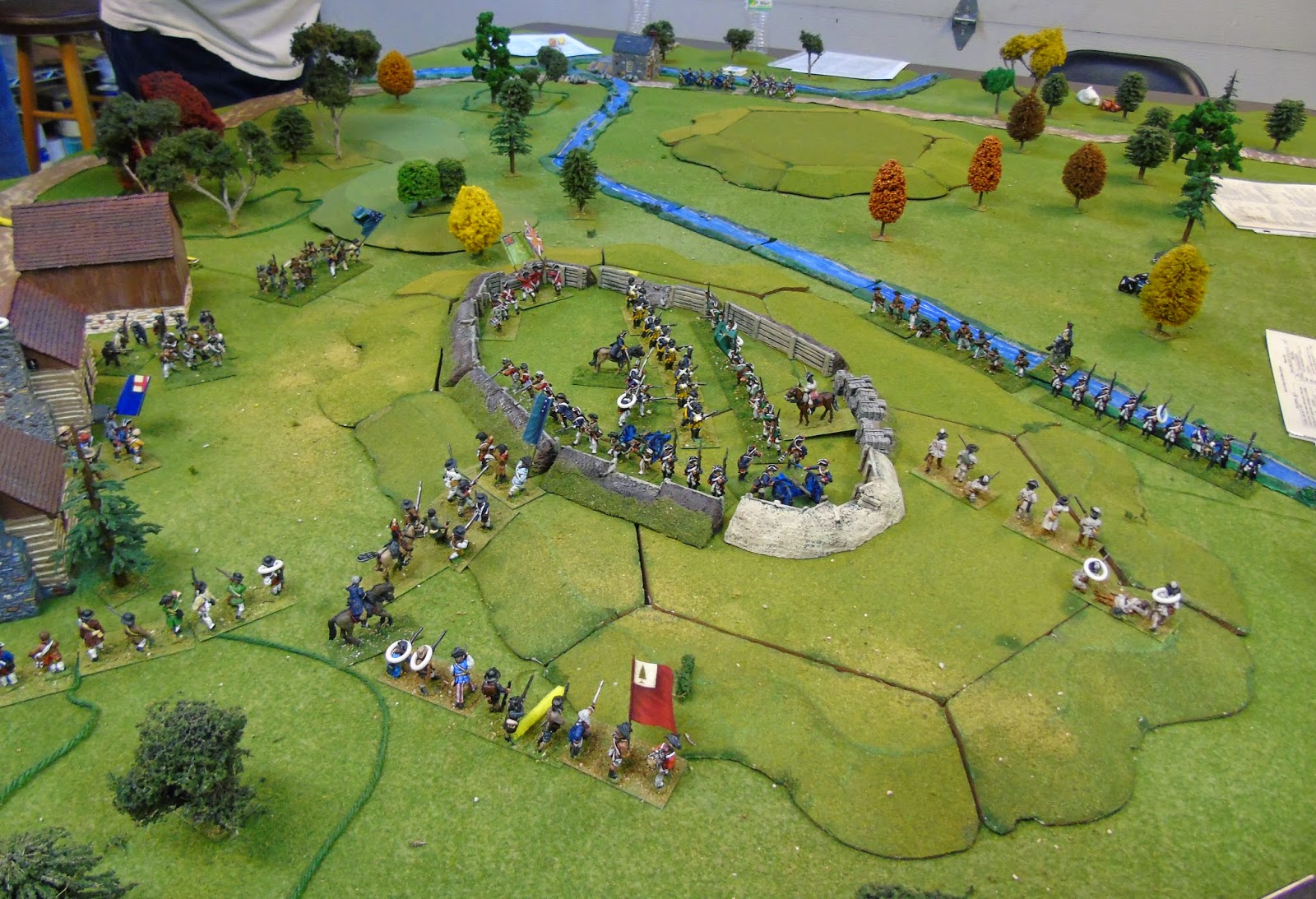 Well almost everyone on the table is focused on the redoubt now.  Our regulars are trapped between the redoubt and reinforcements. 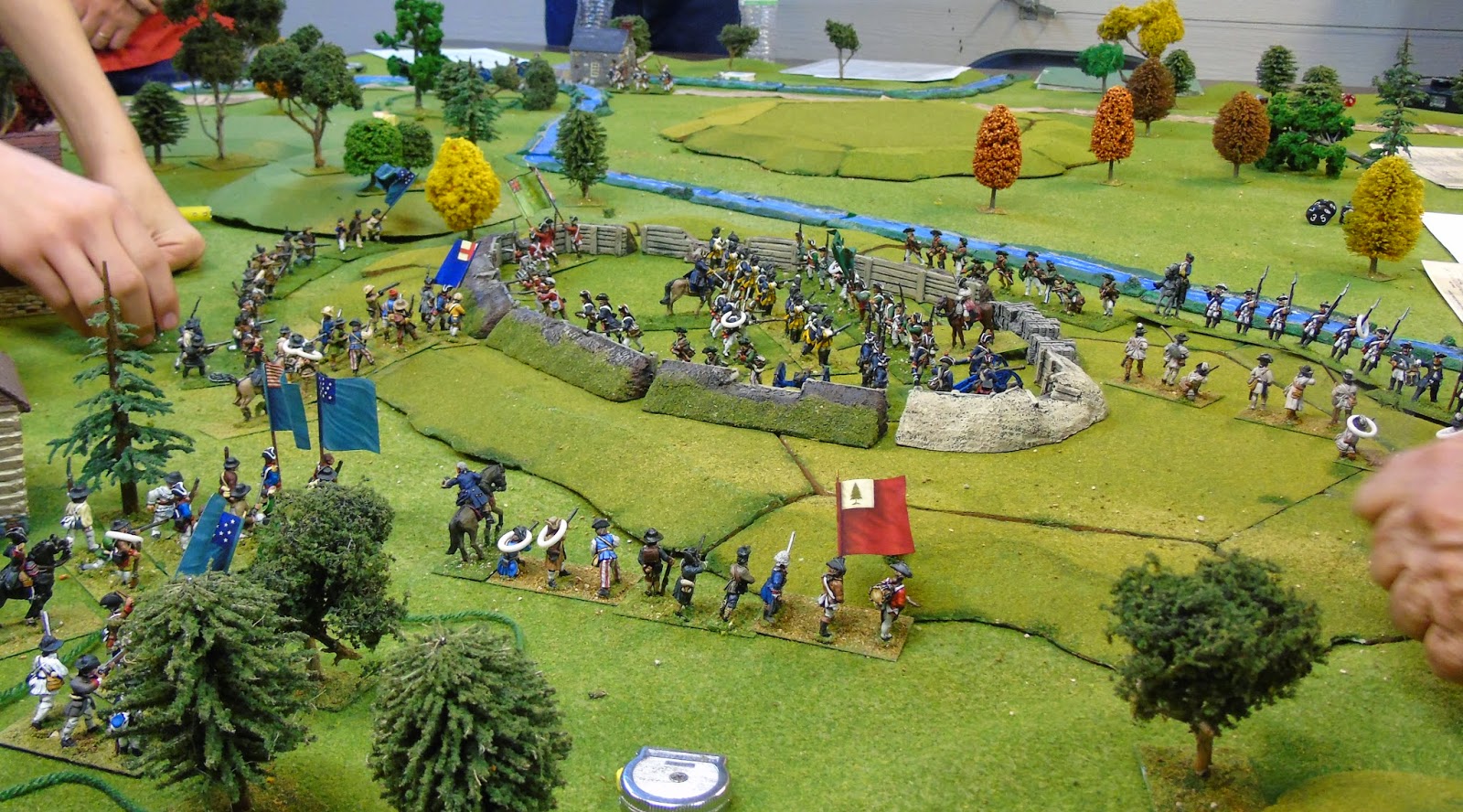 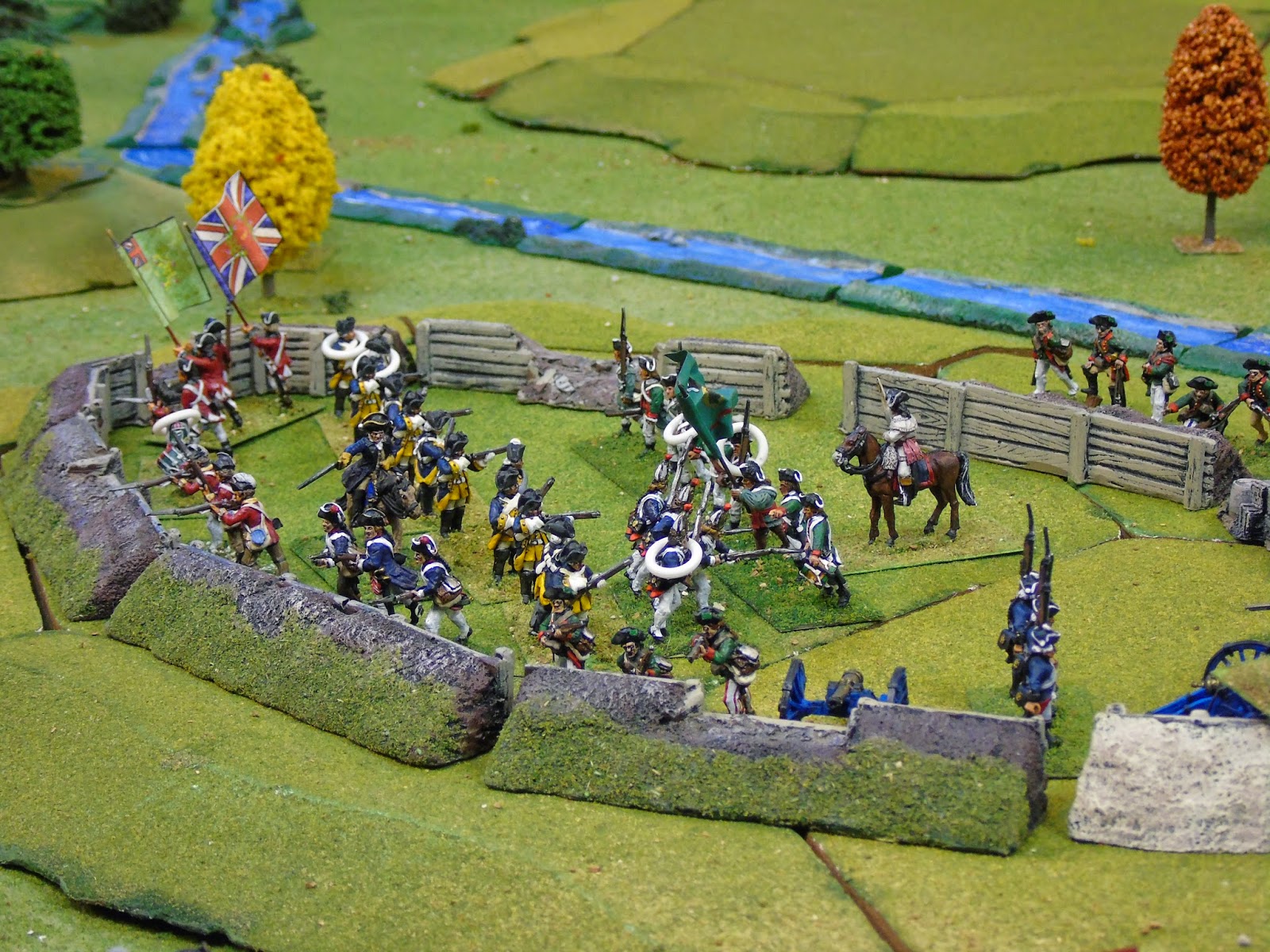 Everyone charges in a last ditch effort.  We forgot how bad we are at charging redoubts. 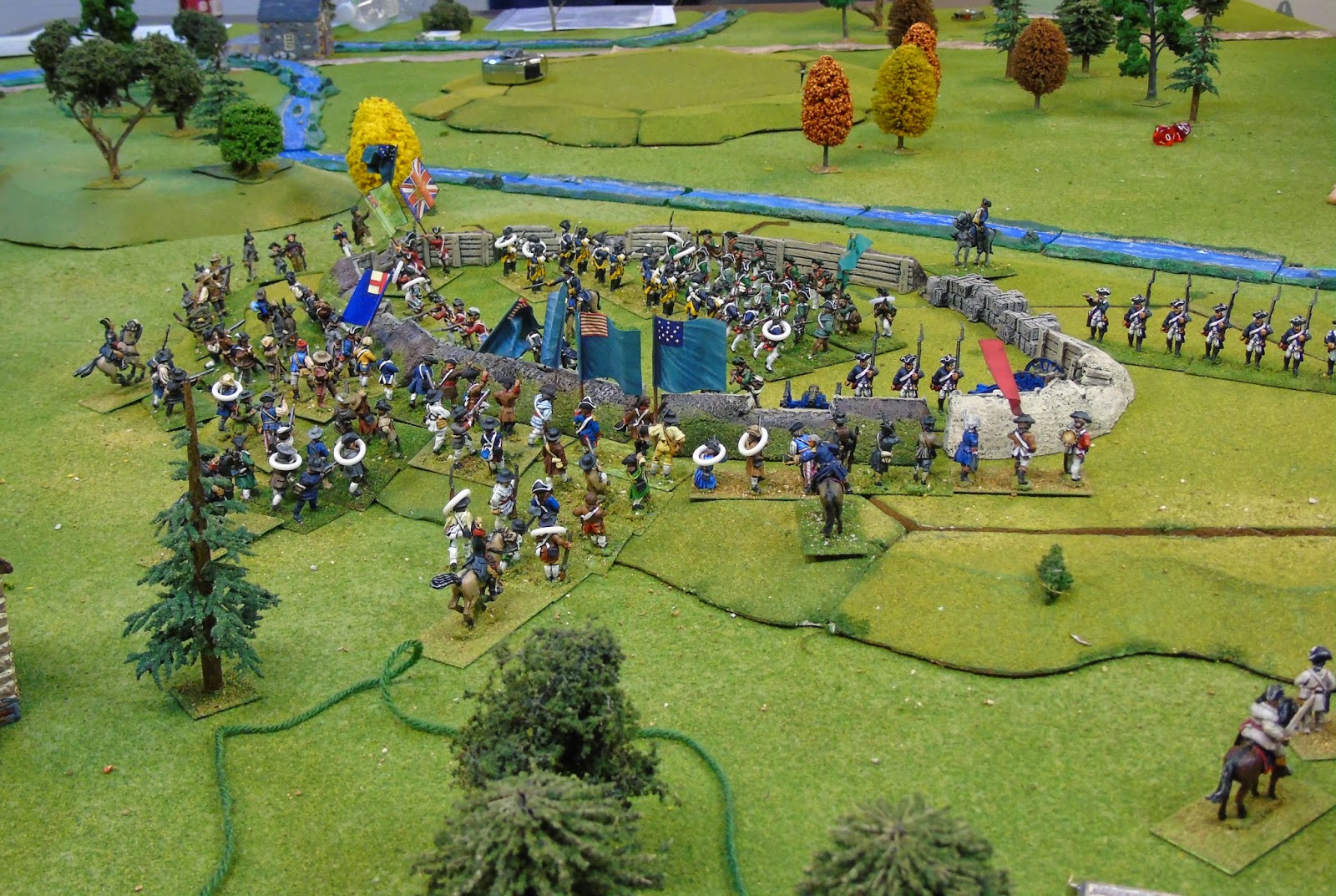 The charge fails and we decide it's time to call it a day.  Perhaps we'll redeem ourselves at Freeman's Farm. 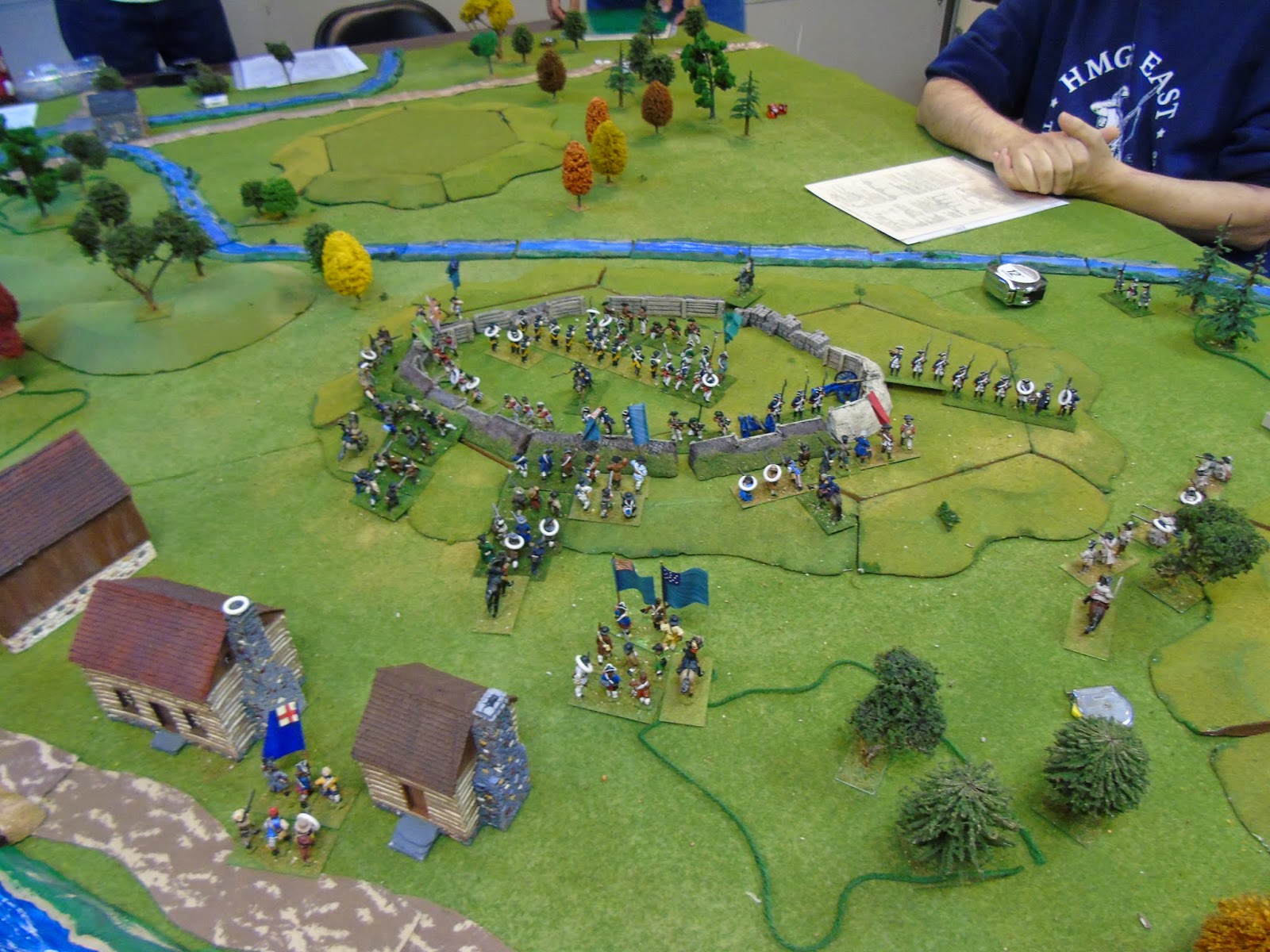 Till next time, I'll have some space marines and a couple French Nappies.