Before an exciting game of Pike and Shot and Zombie, I have a few finished minis for your viewing please.  First up are 16 Fireforge plastic Tuetonic Sergeants.

Only two of the shield designs are invented be, the rest were all found via Google.

I try to give my models wearing very little clothing flesh tone variations to disguise the lack of model pose variation.

A GW LotR hobbit model (no clue which one) and an old metal GW dwarf beserker found in the FLGS bits bin. 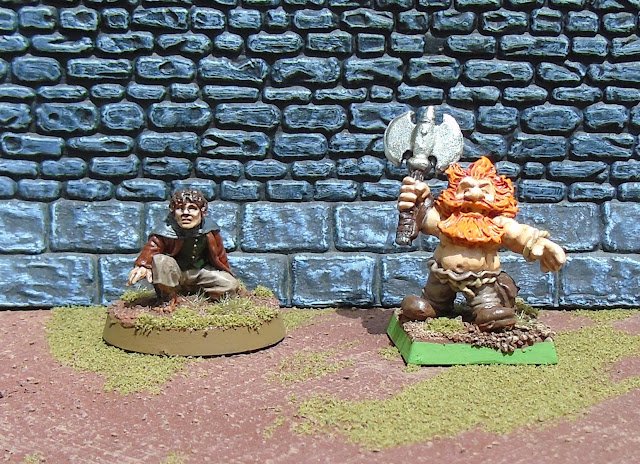 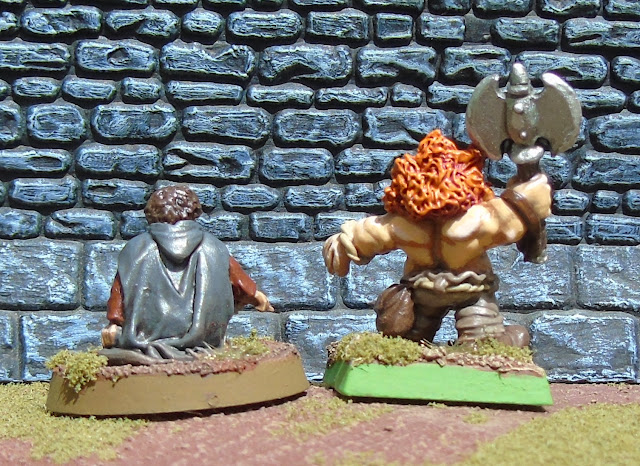 I did not paint the Mageknight zombie, but I did paint the Reaper Invisible Man. 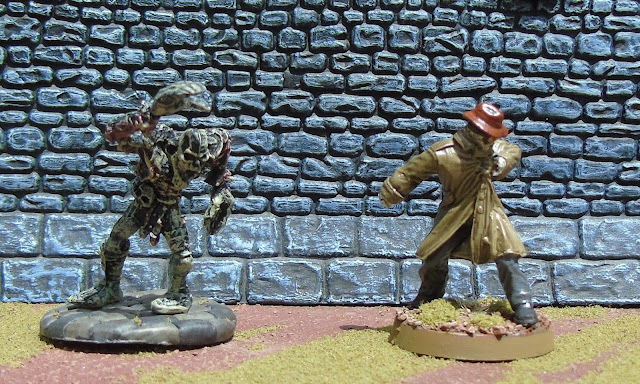 All I did for the zombie was rebase him on a clay base stabbed to look like bricks.  I tried to glue a little grass in some of the cracks to make the bricks look old. 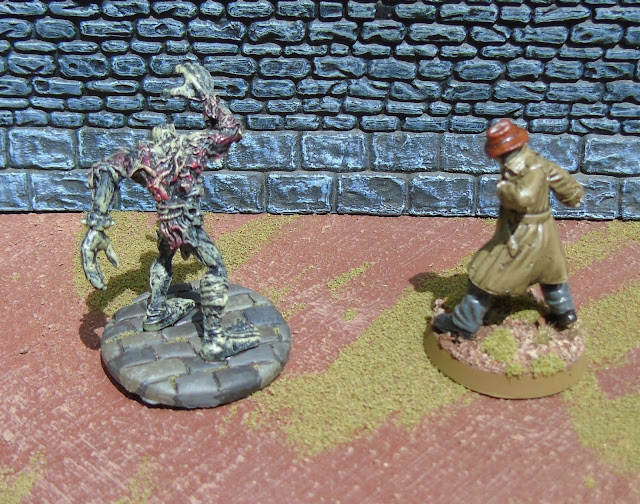 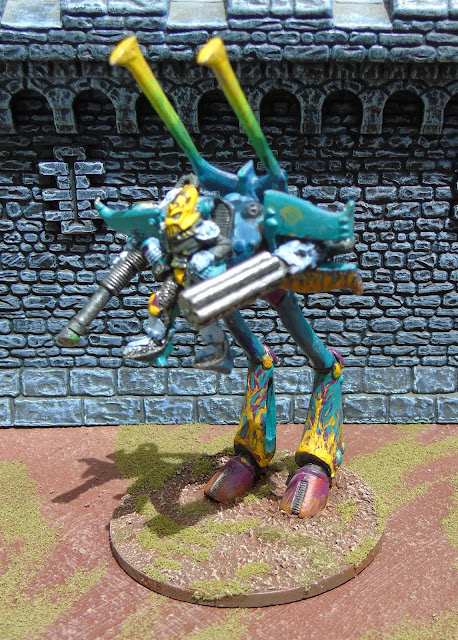 Now on to exciting old world zombie action captured in a series of fuzzy photos.

The game is a continuation of an exciting campaign using the Pike and Shot and Zombie rules.  The mercenary gang in search of the Hidden Valley has finally arrived.  The promised village of safety has requested the gang travel to the Hidden Valley Ranch and search it for tomes of forbidden knowledge.

You may see the estate is clearly full of walking dead enclosed by the estate walls. 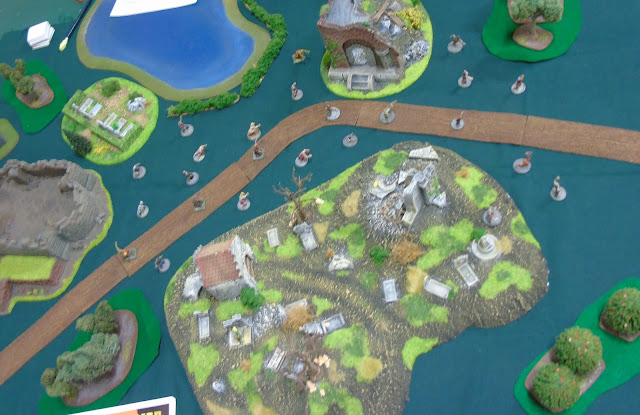 After dithering about the gate for several useless turns, the team has decided to just get on with it.  I can't remember all the characters' names and will make some up.  Pepe the Giant Killer, Carl the Beer Slayer, Fritz, Kieth, and Captain Hauser are joined by Allen with his enormous halberd. 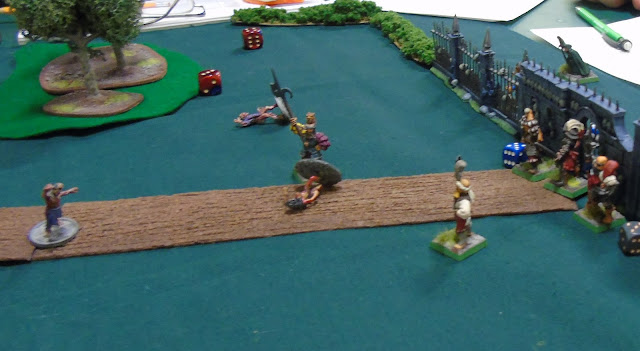 Distracted by all of the zombie slaying the photographer forget to record the action where Pepe and Fritz cut off from the group and put down a spawn point. 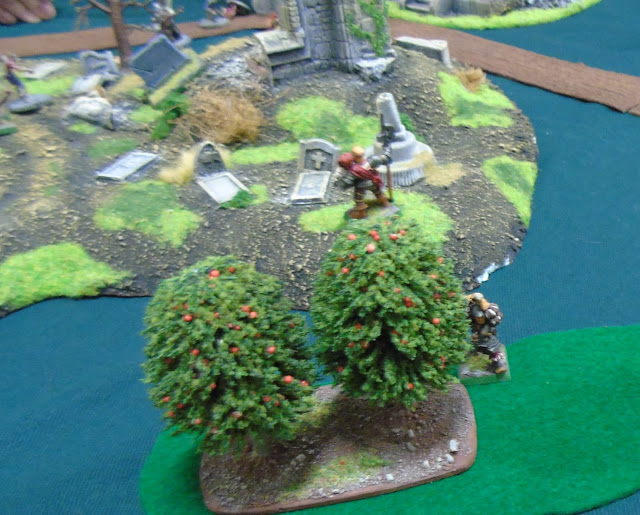 This mission is going to be a piece of cake and who doesn't like cake? 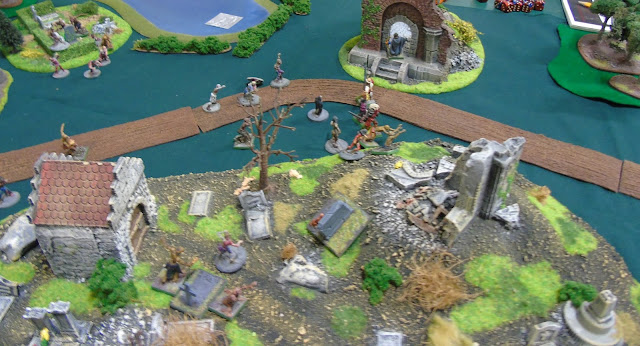 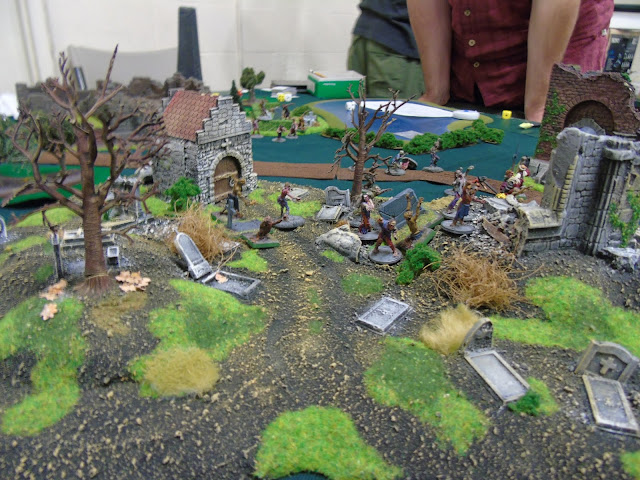 Another appears by the remains of the small fortress. 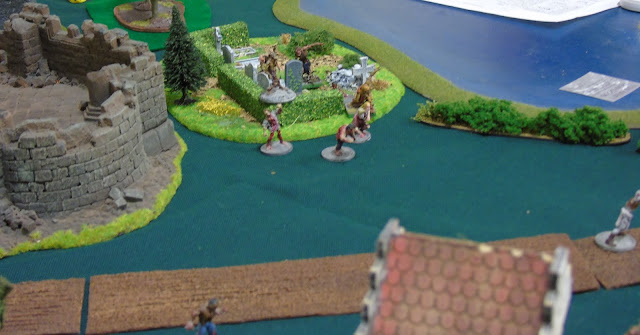 The zombie horde on the hill grows, as another appears in the forest behind the team, cutting off what would be a wise escape.  Fritz and Pepe move to close it, while the rest of the gang decides how to deal with the swarm. 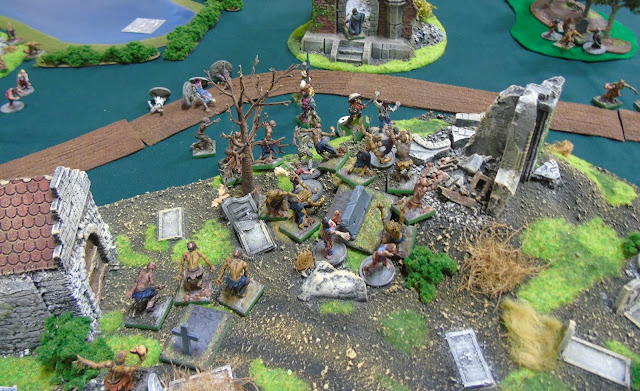 The gang decides to back out for a bit. 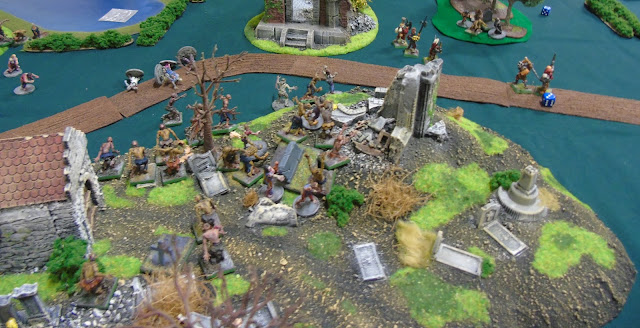 The spawn point is no match for the team's combined strength. 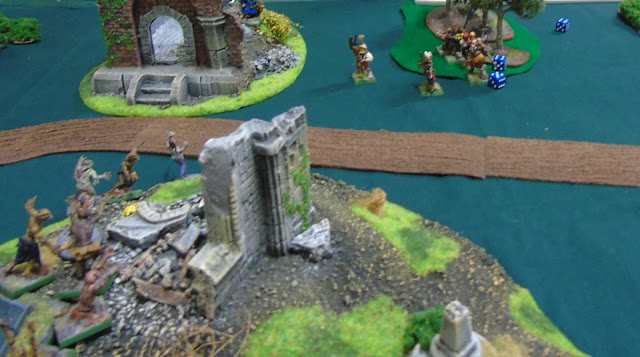 The noise has gotten the attention of some foul beast in the fortress.  The beast casts a spell on Carl the Beer Slayer, our one member who can actually use a bow;  Carl believes this hosebeast is a beautiful women; he's in love. 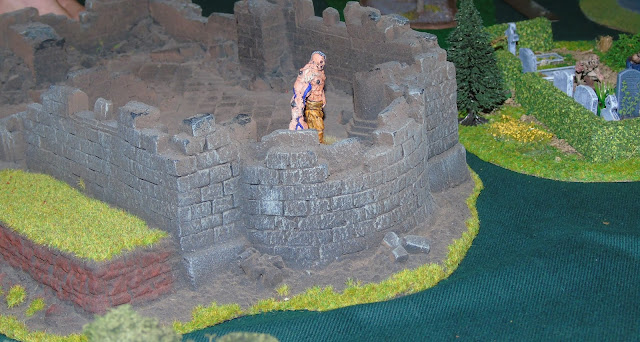 The gang wades into the growing horde.  If Carl is getting married, there might be cake! 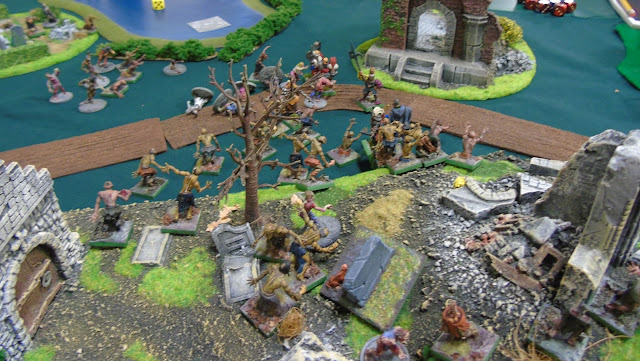 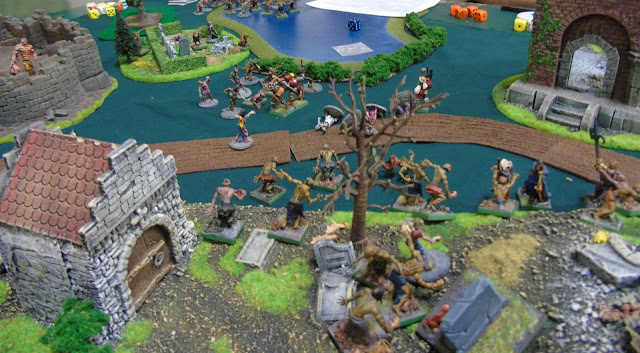 Incredible rolling, obviously inspired by the promise of cake, the gang destroys 50 odd zombies in a turn or two. 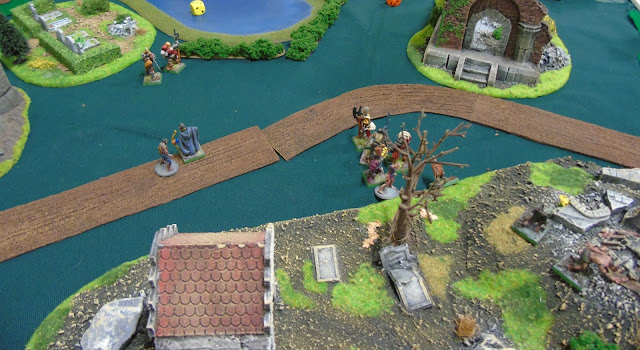 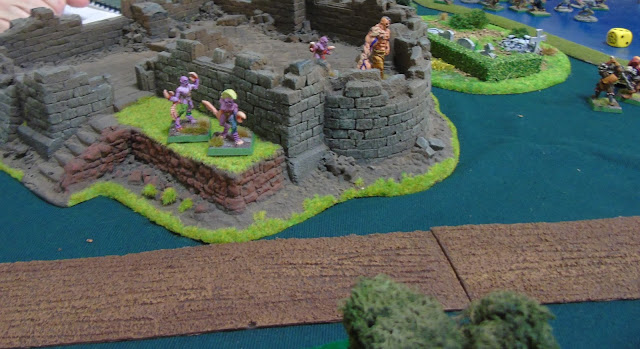 Carl breaks out of his puppy love stupor and uses his longbow like a .50 Cal Ma Duece.  The team forms a line and wipes out the demon ladies.

All that's left is Big Ugly and his hyped up zombie pack. 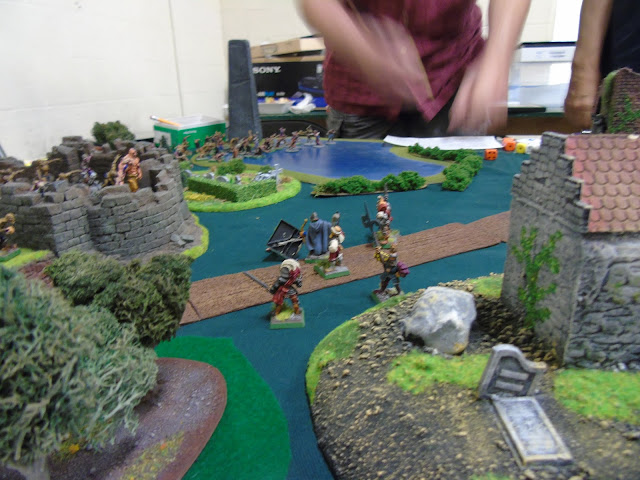 The evil ugly one jumps down and smashes into our gang.  Here the gang is working together.  Rumors of cake in the castle and competing to kill the most zombies, Kieth and Allen,  leave the team to fight the boss their selves. 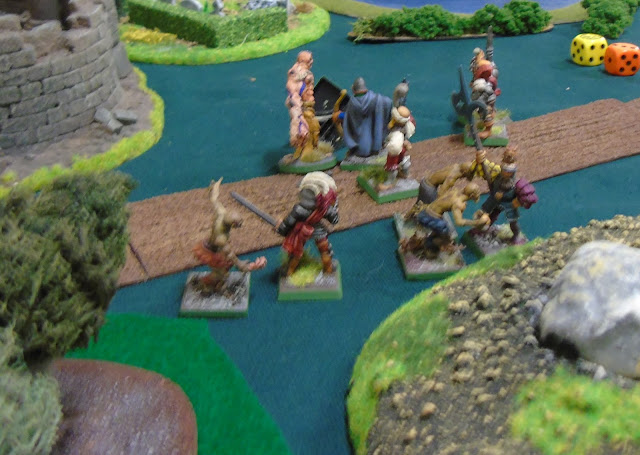 Here's a picture of after the action.  Kieth has killed 31 dead all by himself.
The gang has defeated the liche type giant evil guy thing.  It was close Carl, Fritz, and Pepe were all one wound from dieing and face the potential for permanent wounds and possibly lameness.  Good news though Carl the Beer Slayer found an evil looking book, mission complete, big money reward. 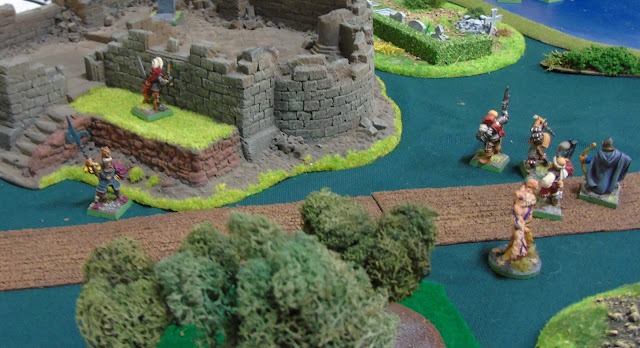 Till next time when I'll have some action from the Heart of Africa and possibly some old dwarves painted.

Hugs and Kisses,
Baconfat
Posted by Baconfat at 3:21 PM