I apologize for not posting more frequently; I'm often to lazy to take pictures.  I've managed to pictures of few minis and dragged myself to a computer.

First up are six dwarves from the end of Ral Partha.  The were for the Battle System game and came out of a boxed set called Iron Lords Orc Foes.

I'll be painting up more of these guys.  They are lovely sculpts, despite the lack of poses.  I believe they would match up great with the GW LotR guys if I put them on GW pedestal bases.

A random selection of old GW Imperial Guard models and a space marines.  I believe the two multi-melta guns are no longer "legal" for IG armies.  I didn't assemble the standard bearer, but it was a clever idea drilling a hole for what standard.  Of the three medics, the squat is my favorite.

The standard bearer is a plastic model from the original IG box set.  The marine is called a Legion of Damned and I didn't grab a back pack when I found him in the FLGS bits bin.

The first model is a clicky prepainted Heroclix model of Blade the vampire hunter.  He received a paint job after surviving 20 test pilot missions as my clear coat aerosol test model.  If you can survive 20 missions you get a new paint job.  The lady is old RAFM Cthulhu investigator.

The guy with hooks for hands is detective JJ Arms, who was famous for finding Marlon Brando's kid.  He may have also been famous for having no hands. I tried to make his base look like leaf strewn asphalt using green tea leaves.   There's two more WWI Germans and a couple old old Ral Partha orcs.

Everyone was posing behind this new building I made.  The Indian terrain in a recent Wargames Illustrated inspired me to make cheap knockoffs of the buildings in it.  It's just hot glued foam core board with the paper removed.  After assembly, I simply covered it in spackle and primed it.

I loved these little staircases and they are super simple and fun to make. 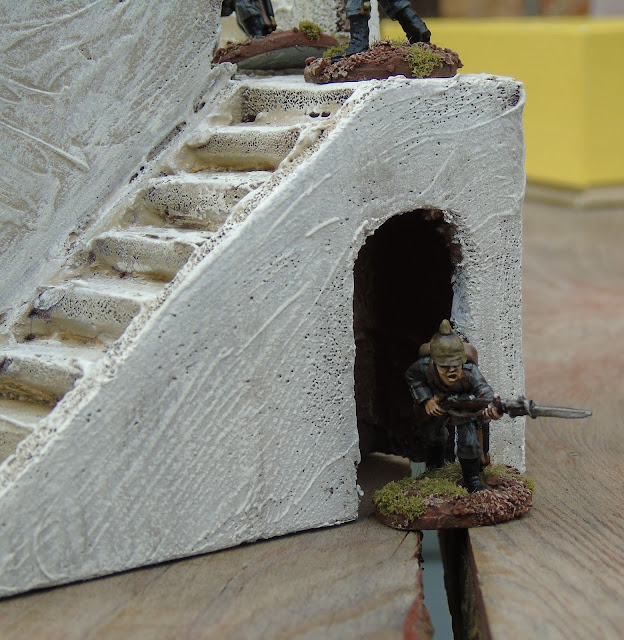 The brick work is quickly made using a pen in the foam and painting over it.  The door is coffee stirrers.  The roof beams are BBQ skewers; I should have put them in before plastering the building.  The skinny little windows were cut out with a hot knife. 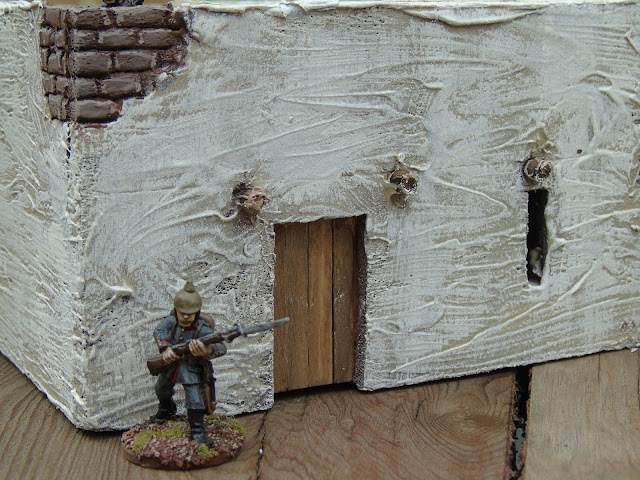 Till next time, loved ones, when I shall have more dwarves, WWI French, Oldhammer IG, the Mouth of Sauran, and probably some random whatever.