Today,  I'm pleased to post for your viewing pleasure some of Khurasan's new line of 28mm sci-fi troops.  Khurasan has produced three pack of these Federal Army troops.  In the picture you'll see two of the three packs, the regular troops and heavy weapons.  The other pack, which I did not buy, is some  machine gunners.

It's hard to tell in the pictures, but there is four different shades of green on the models.  From a distance the colors blend making the models look drab and boring.

You can see how the match up with other miniature lines, left to right:  Khurasan, Warzone (plastic), Khurasan, GW (plastic).    The Federal troopers are slighter, but yet taller than space marines.  They are sculpted in a far more realistic way than most popular sci-fi models.  If they were shorter they would make great Imperial Guard as they would make marines look bigger and tougher.

Here's some homemade post apocalyptic furniture for terrain pieces I'm working on.  They be dirtied up as they find their places in rubble heaps or hovels. 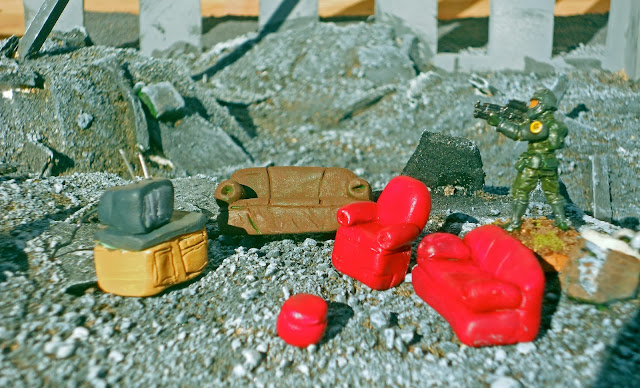 Next time I'll have miniatures I painted for the NOT Analog Hobbies Painting Challenge.  There's some Wargames Factory WW2 models, Perry mercenary hand gunners, and three little pigs on the way.