It's been a few weeks, so I have alot of random stuff for you.  First up are some old out of production   Citadel Wizards from the late 80's or early 90's.  Some are from their old AD&D line, designed to show character progression.

Here's what I think is a pre-slotta base Citadel Wizard with a much larger plastic wizard from either a Dungeonquest or Heroquest edition.

I painted up more Flames of War Airborne infantry (from the Open Fire starter set).  They are much less shiny than my last batch, but I didn't do a good job on the washes.

Here are some Jagdtigers I painted for friend.  I took a picture with the phone, so you couldn't see any of the tedious detail work. 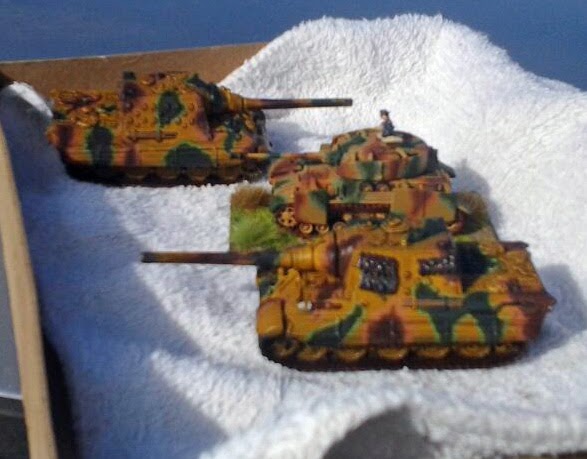 Look, now here is fairly modern 40K Rhino.  I painted it similar to the GW IG Steel Legion camoflauge pattern.  The variation is craftstore dark grey and Vallejo Dead Flesh, instead of GW rotting flesh.   The paint looks rough because I put a clear matte coat over an oil wash which only appeared to have finished drying.  The effect is similar to crackle paint.

Here are two Napoleonic Officers.  A dismounted French Hussar and what I'll be using as an officer for my British Rifles.

Most of the above pictures were taken on water mill diorama my eleven year old daughter built.  The only thing I did was supervise power tool use and heat the water beads on the oven.  And paid for all the damned trees.


I was sure she'd get an A, but her school does something called "Common Core".  No letter grades, just numbers.  She got a 3.  Every kid got the same score, even the kid that glued a Tootsie Roll to a folded up piece of orange construction and called it a canoe.

The daughter said kids can't get 1s or 2s so early in the year, otherwise they won't show improvement by the end of the year.   A Tootsie Roll canoe would have been easier; that kid is a genius.

She should have a been given a 4.  Look at all the stupid bubbles in her water; can you say, "a severe beating followed by several months of standing in the corner"

Till next time, when you'll be forced to see more terribly taken photos of mediocre miniatures!  Maybe some Prussian Cavalry.