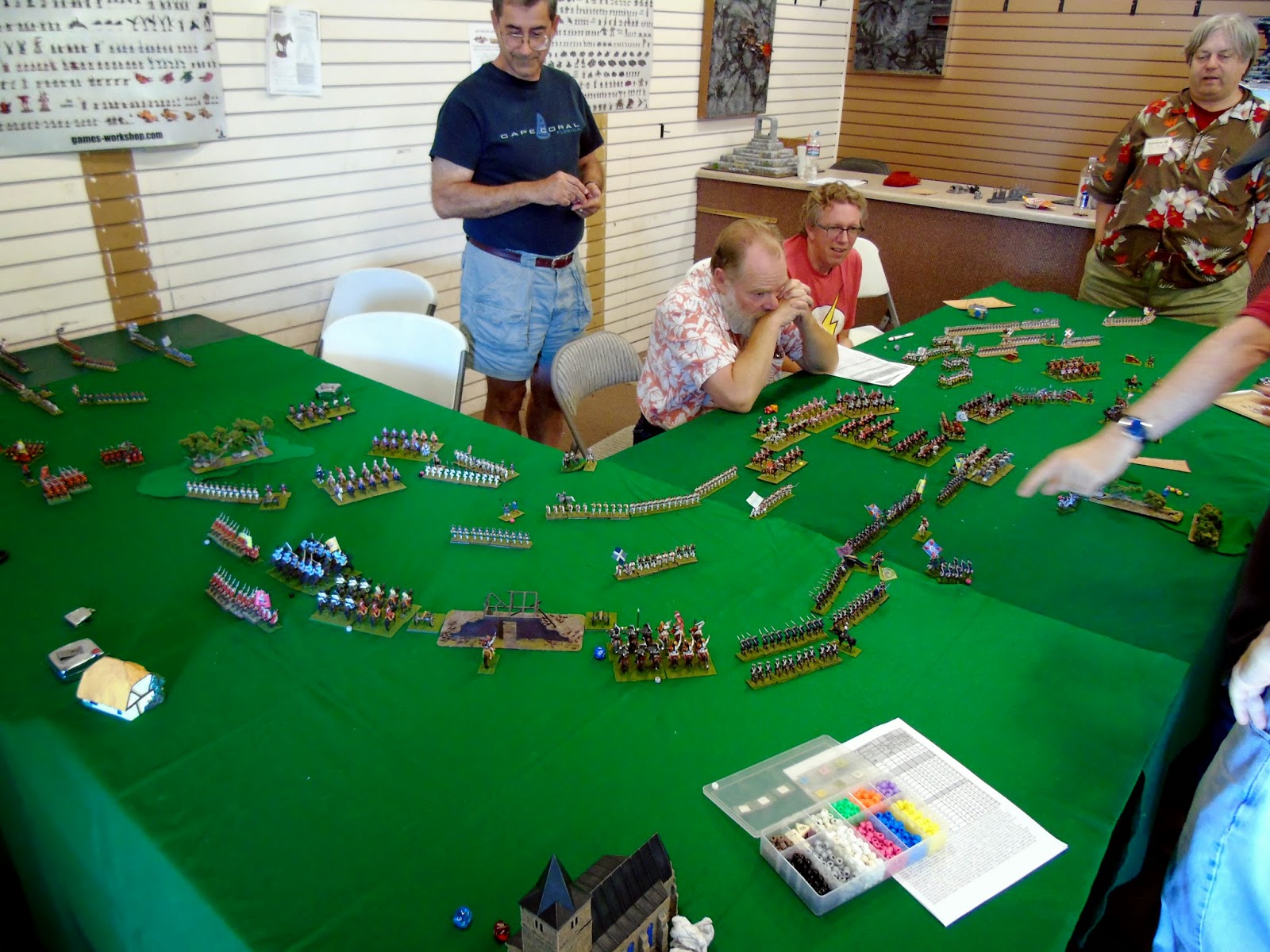 A friend Steve, whom I've asked to join me in blogging, hosted a gigantic 1500 model game of the battle of Minden (Seven Years War).   The rules were the fun, easy to learn "Napoleon's Battles".  A total of nine Grognards showed up to play the game, but Steve was able to control the chaos.  I don't think I'll ever host a game that big.

Here is his After Action Report I am blatantly cutting and pasting out of an email:
"OK, on to the battle.  I set things up historically but both sides had their own unique strategies.

Seeing the exposed British flank Clay and Doug tried to swing their divisions in on them in an attempt to pin the Brits so Tim's cavalry could ride them down. This was partially successful but the French Command had to move over toward Gerard as Jeff's cavalry was initially very successful and Gerard was on the ropes.

Clay's division found itself out of command and immobile due to Contades moving toward the French Right.  Doug was able to get his Saxons close enough to provide support as Tim finally launched his Cavaliers against the Red Coats.  After many charges the French cavalry were able to drive back the British infantry, killing Von Sprockern in the process, and the poor Hannovarian Guard were all but surrounded.  At this point the British cavalry under Granby was finally forced into action.  The "Best cavalry in Europe" now drove into the poor Saxons and drove them back and captured Prince Xavier in the Process, thus saving the Allied Right.

In the Center Jeff's cavalry charged on turn one and never let up, routing several units.  Somehow Gerard held on as Von Holstien's cavalry were never able to achieve a decisive breakthrough.  Because both overall commanders concentrated on the Center and Allied Right the Allied Left ended up being little more than an artillery duel.

Around 5:30 some of the guys had to leave so at this point the French had lost nine of the 15 units to break their army (9/15). The Allies had lost four of 15 (4/15).  I declared it a Minor Allied victory.  It was a very tough fight with some very good generalship on both sides!  The French commanders can be happy they avoided the catastrophic defeat Contades faced in history."
Steve has probably painted 3,500 SYW minis, so hopefully he'll host another massive game again in the future. 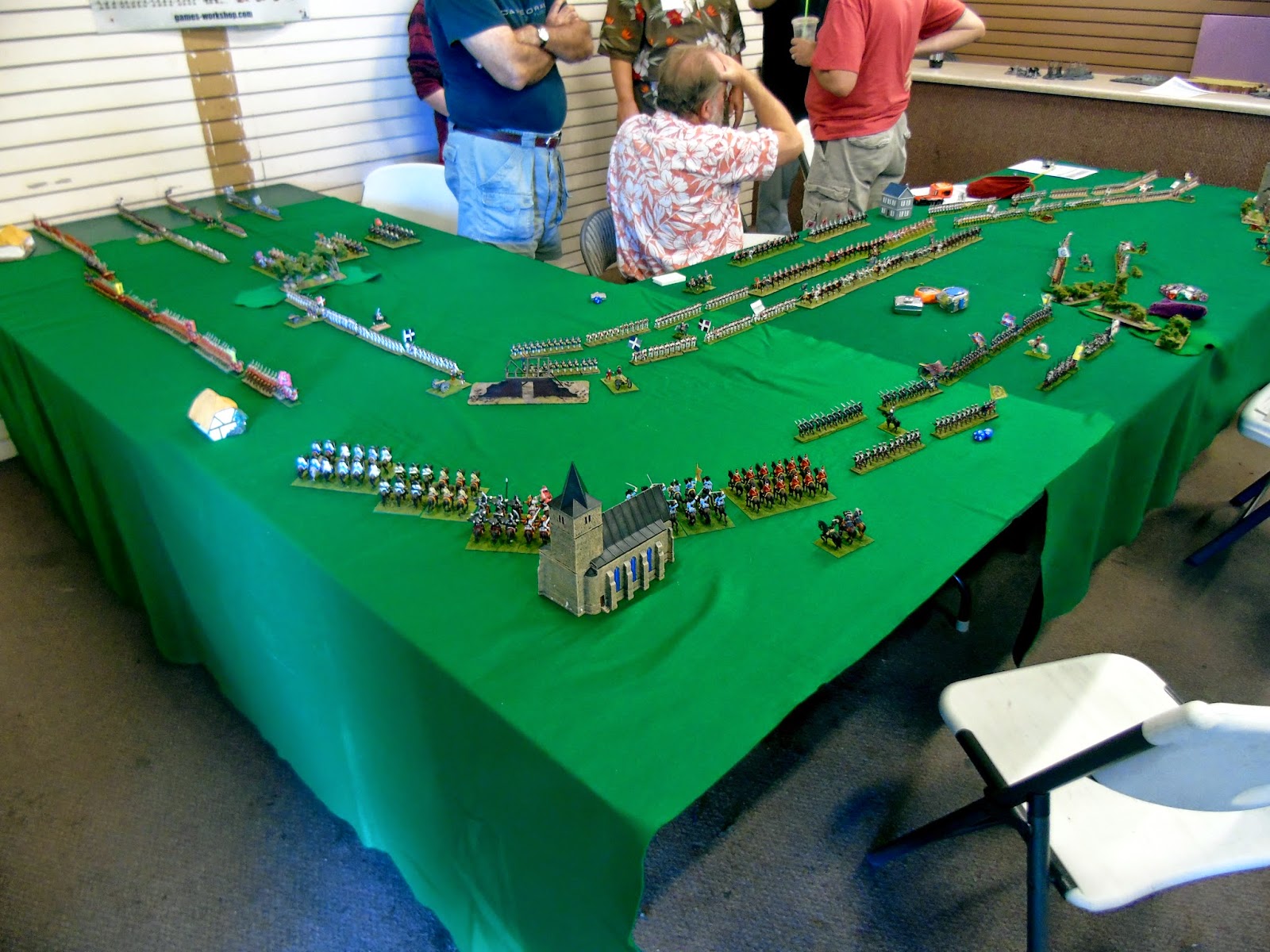 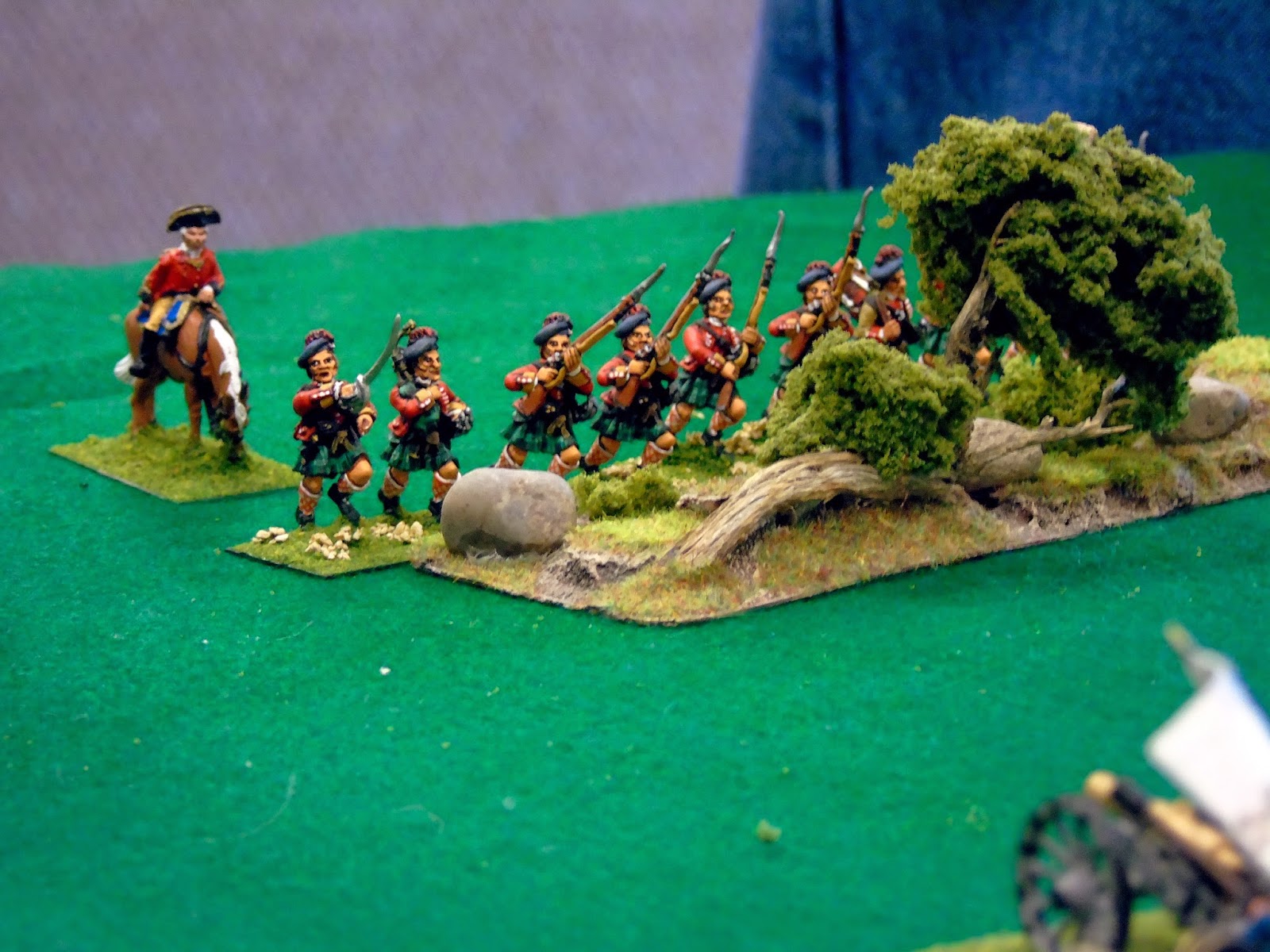 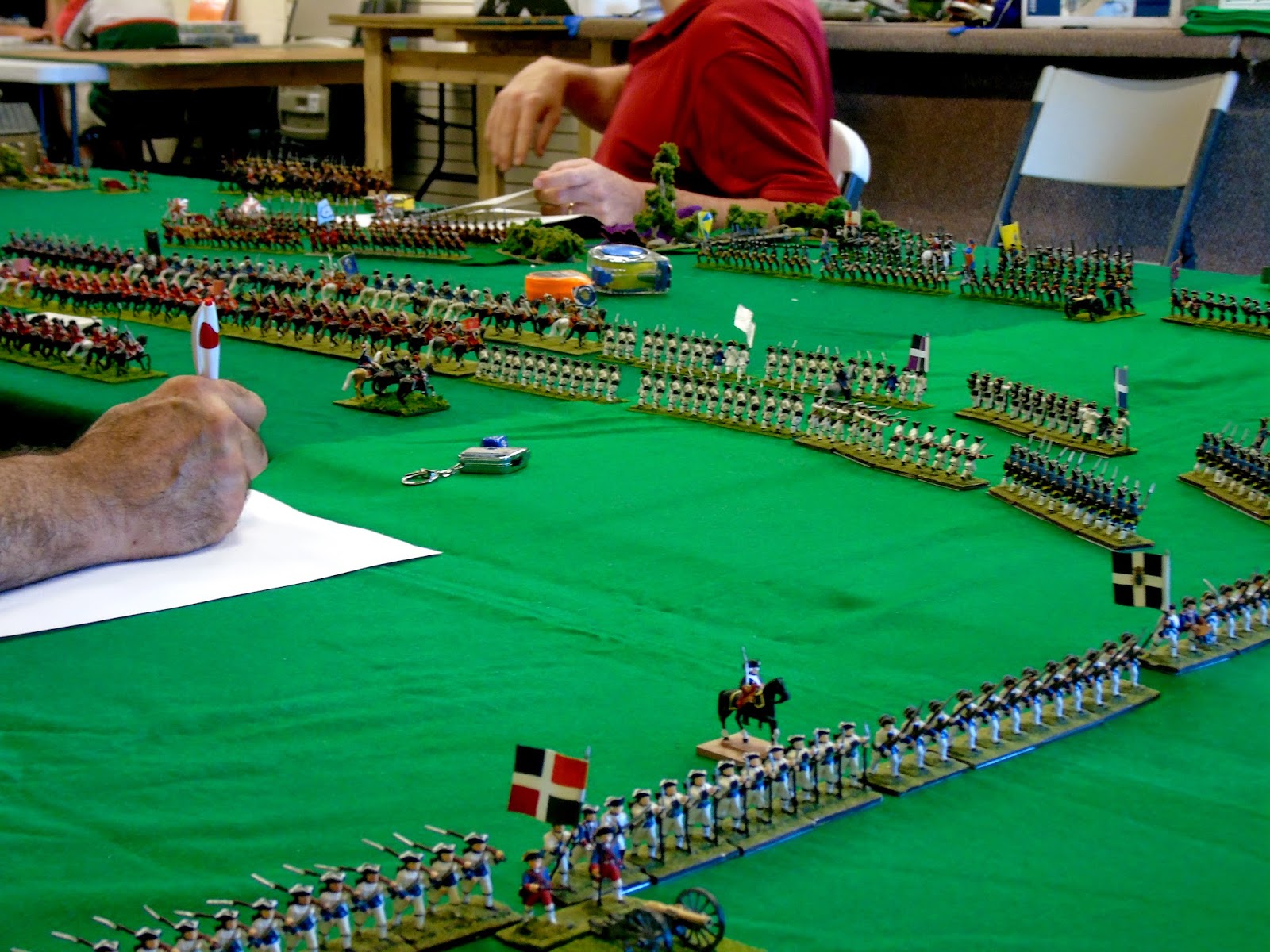 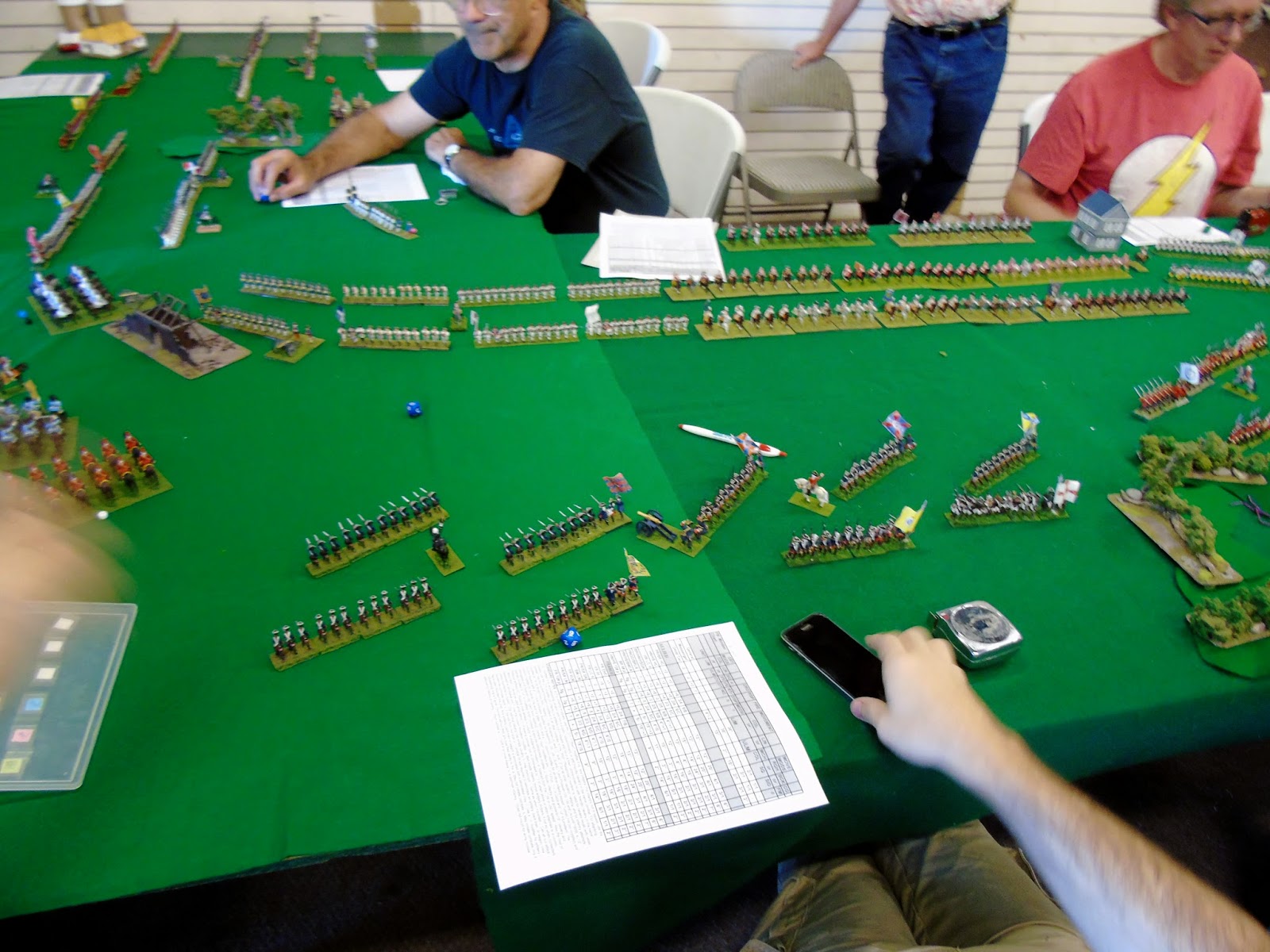 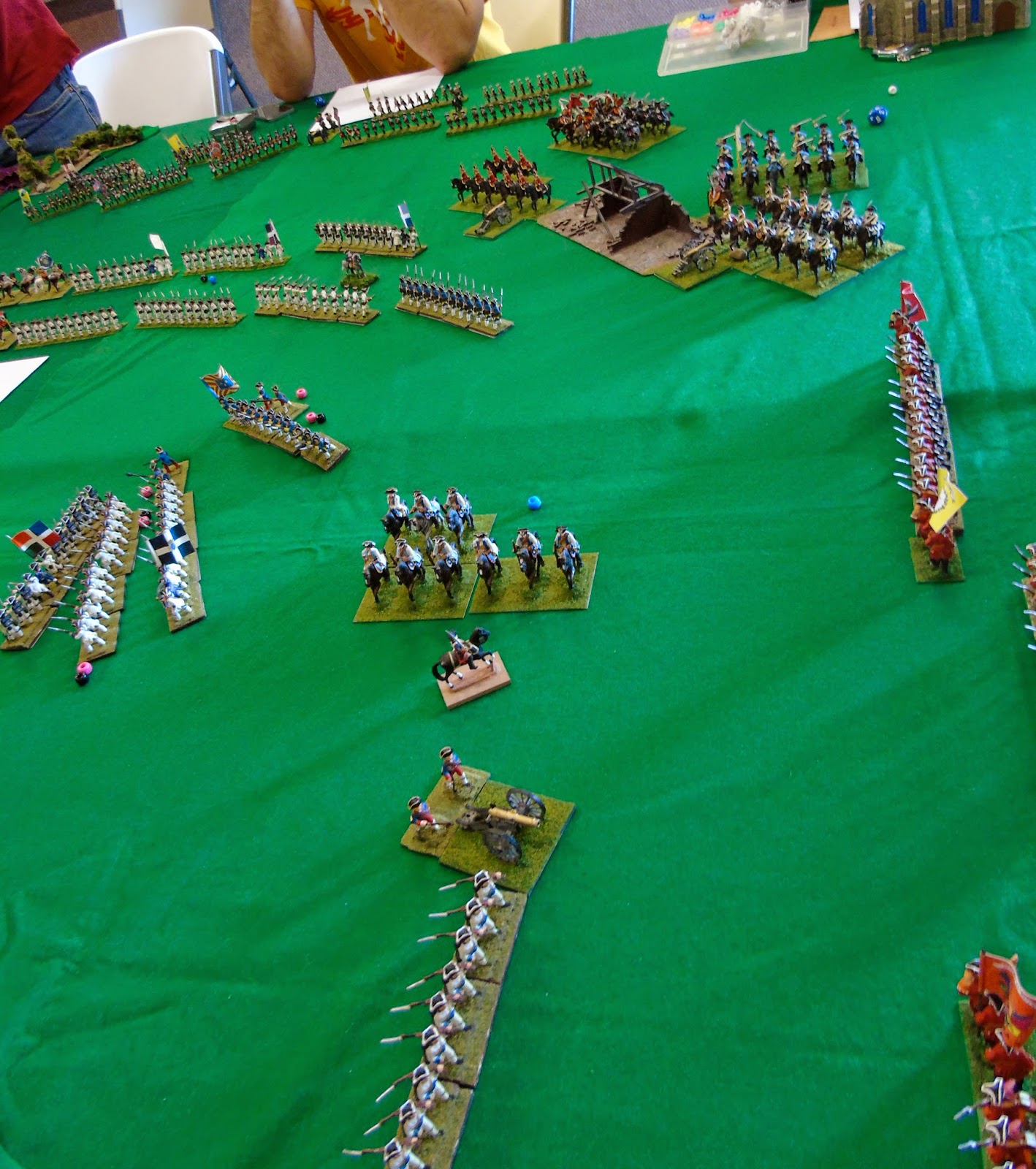 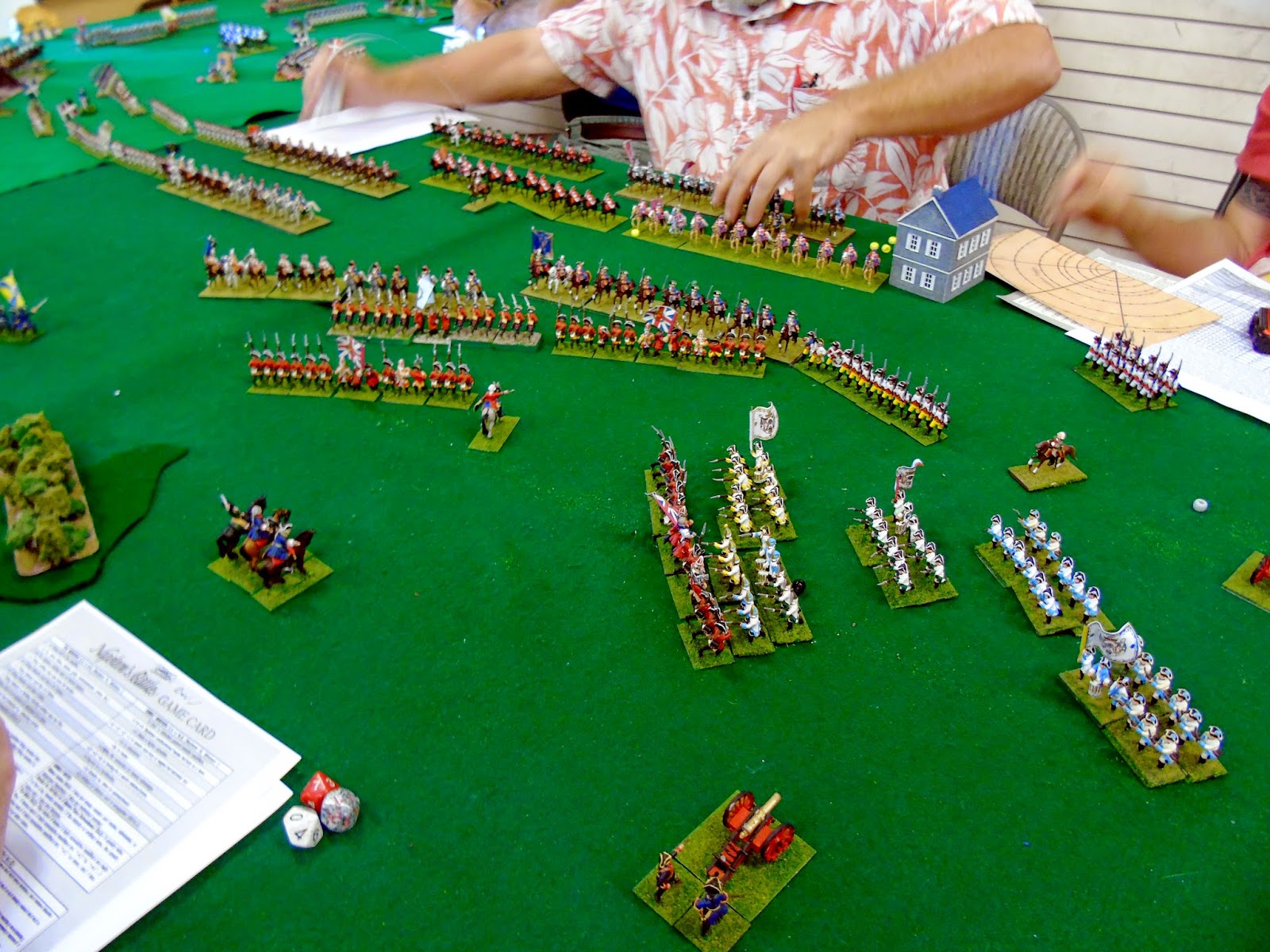 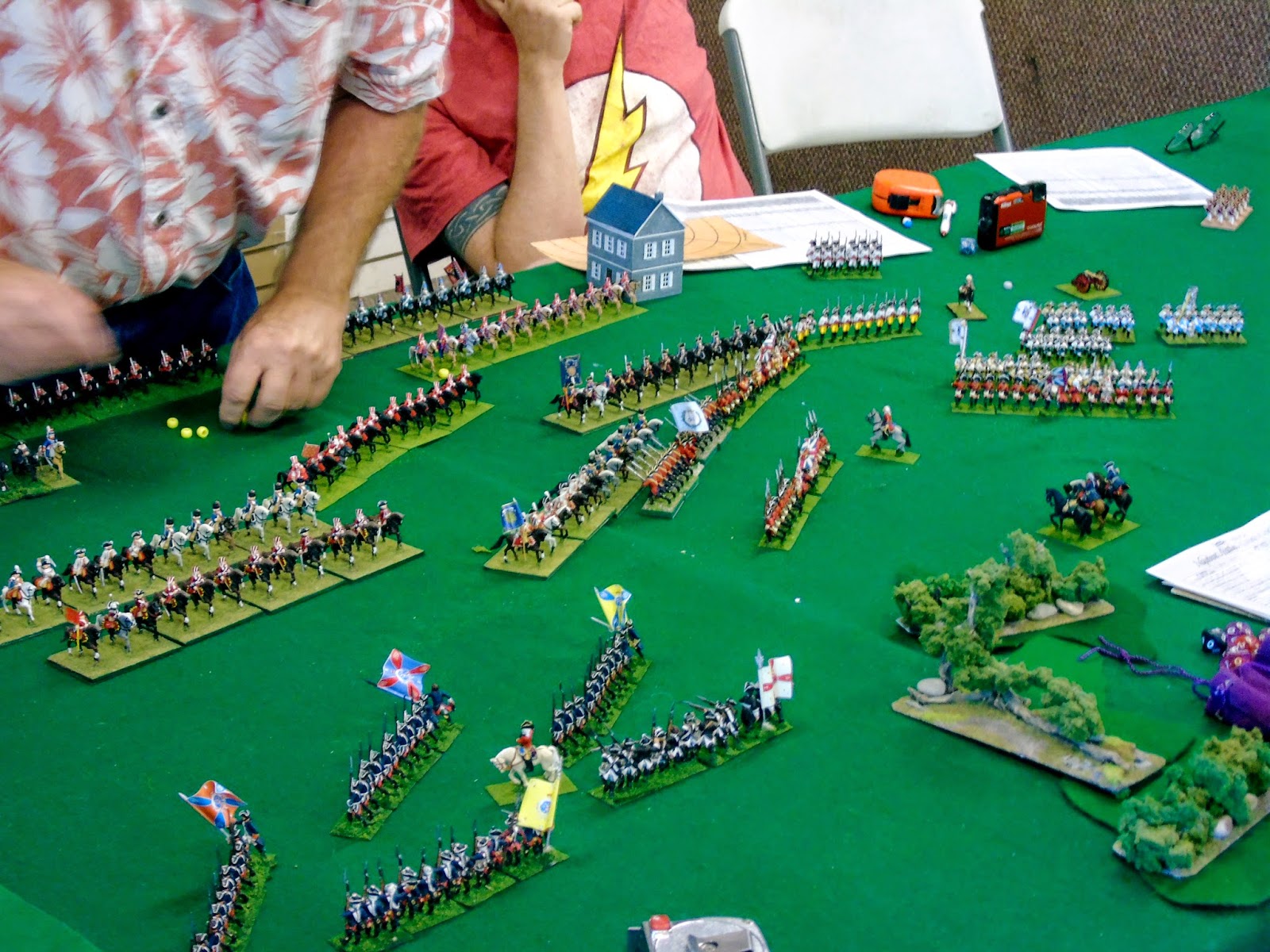 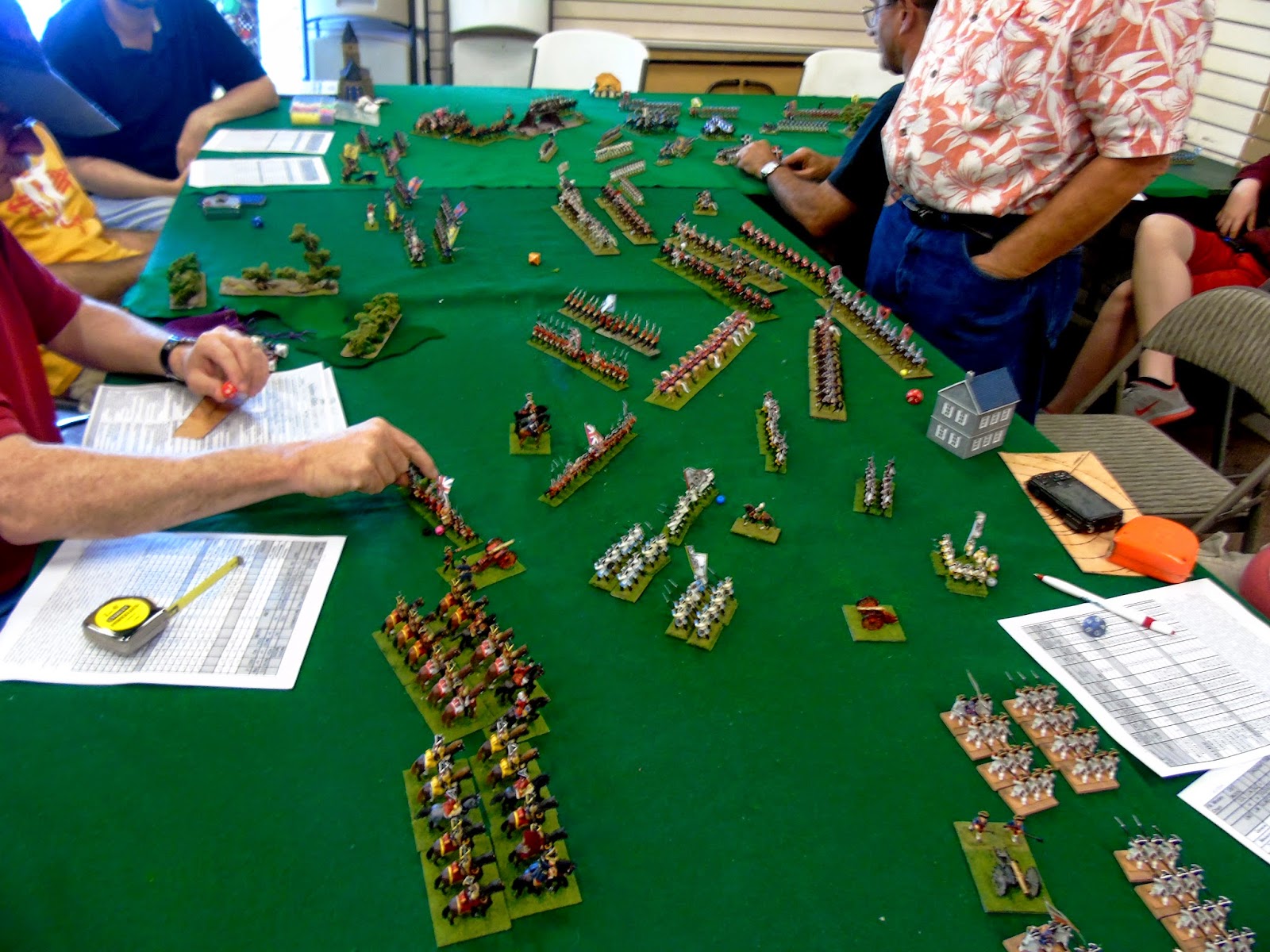 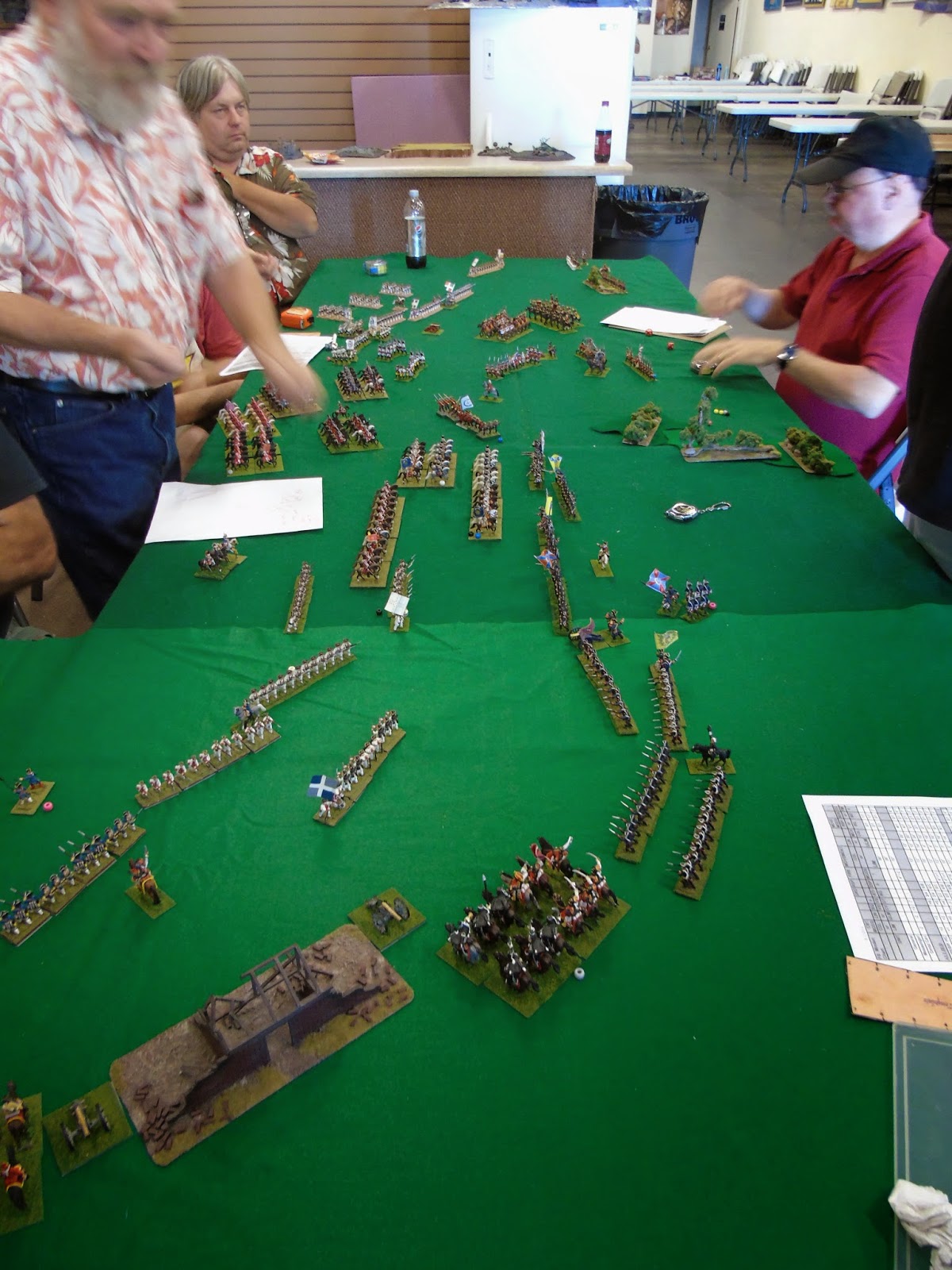