Not many new paint jobs completed, but I did get to play in a big Heart of Africa game.
First up is the General Maximus from the movie Gladiator, on foot, dog, and mounted with dog.  They're painted for a friend, based off screen shots from the movie.  The pink shrub was my special touch.  The models are Warlord (I think) and wasn't impressed with the foot model's cape (boringly flat) and the horse (softer metal horses need two points of contact with base not one).  If the user isn't careful the horse model will eventually break off at the single ankle. 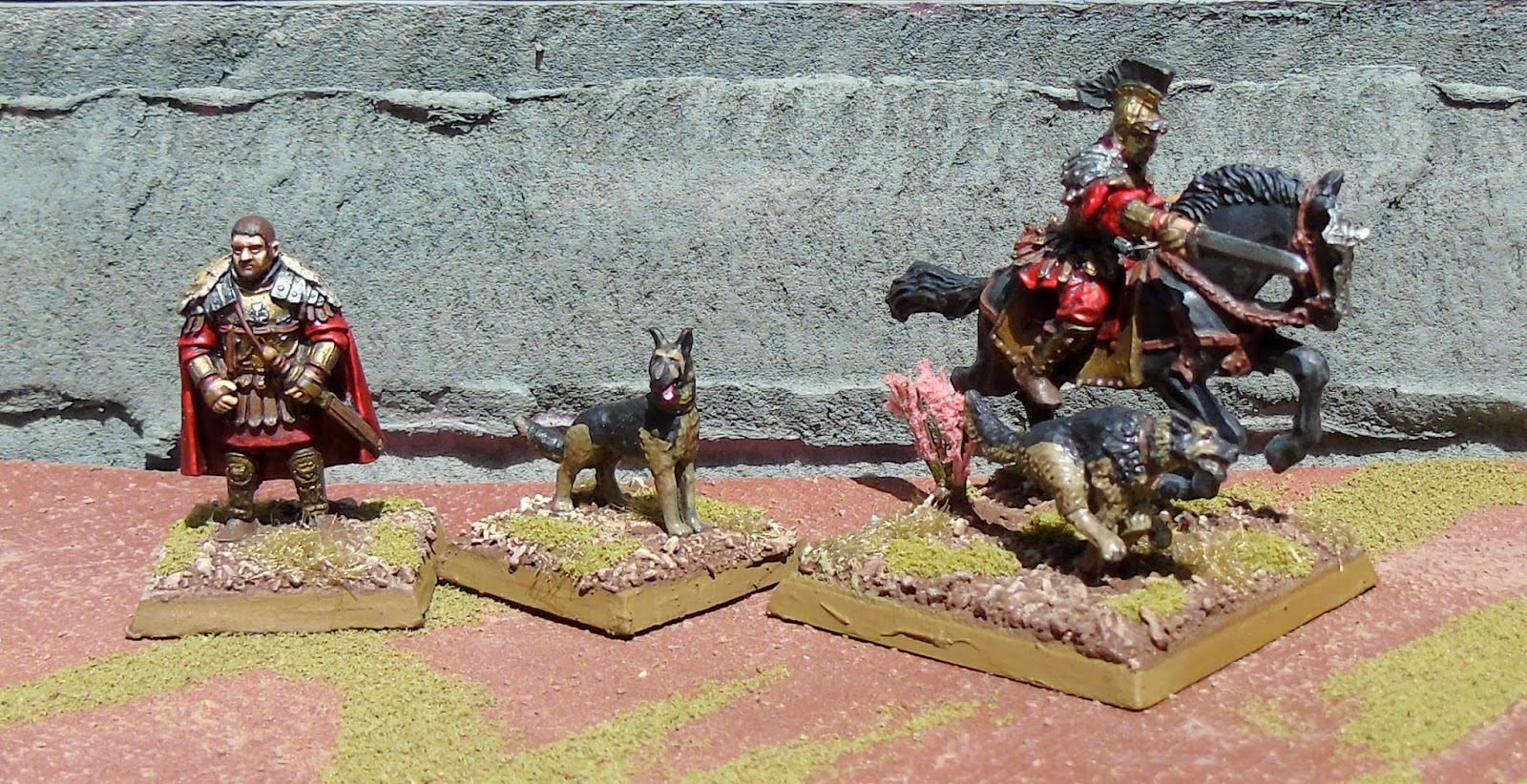 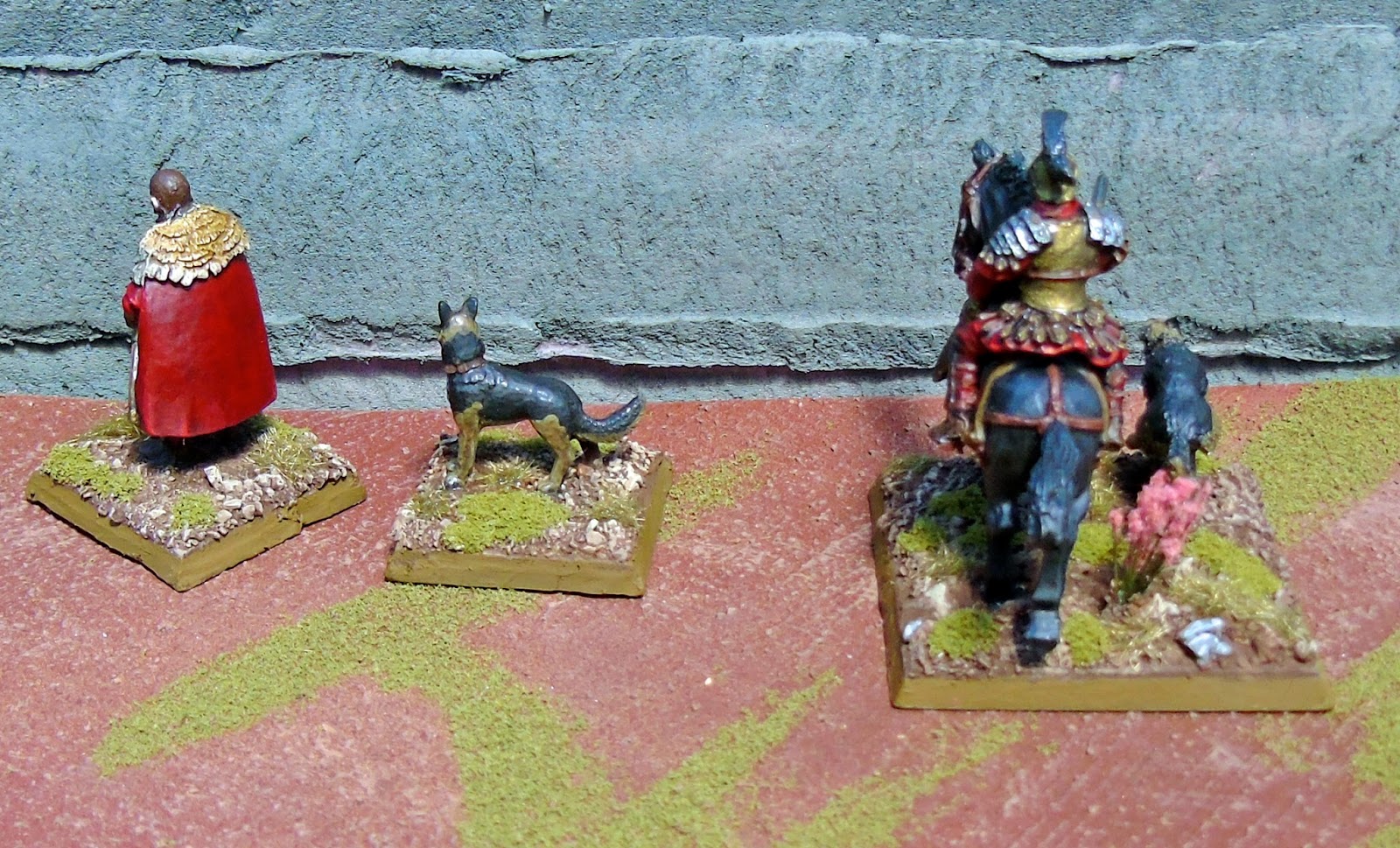 the two terribly painted beakies are based off art in the Rogue Trader book:  a Flesh Tearer and a Field Police.  I'm not sure the Field Police were supposed to be a chapter or the evolutionary precursor to the chaplain. 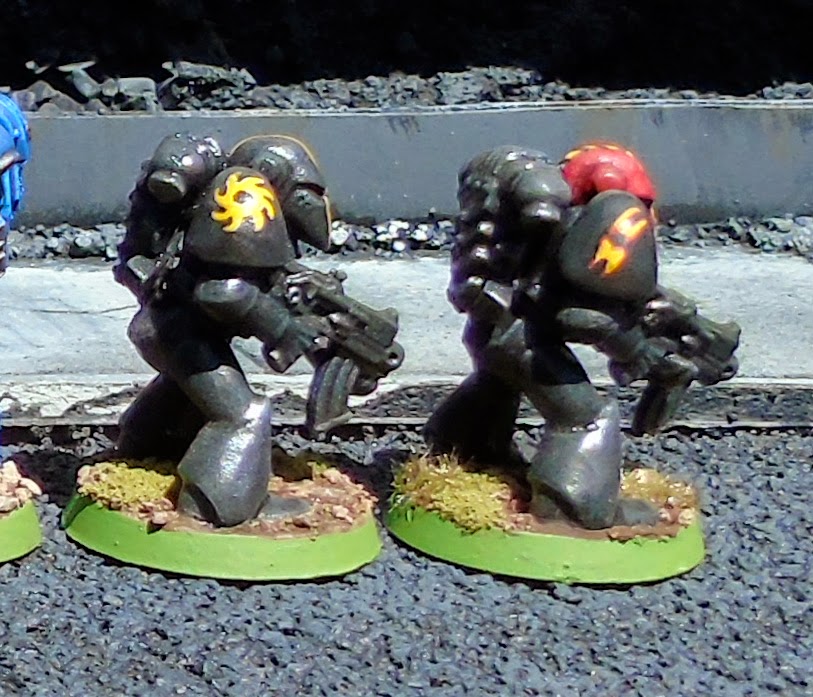 Regardless of wether Field Police are a chapter or not, I'm counting them as one.  I now have 10 different chapters painted, 990 left.

In more exciting news I managed to play in a fun Heart of Africa game.   The game was a meeting engagement, with the Arab/local force as the notional attackers.  There were three objectives:  two baggage piles (worth 5 vp each) and a village worth 10 pts.  To take the village, you must have more models inside at quitting time. 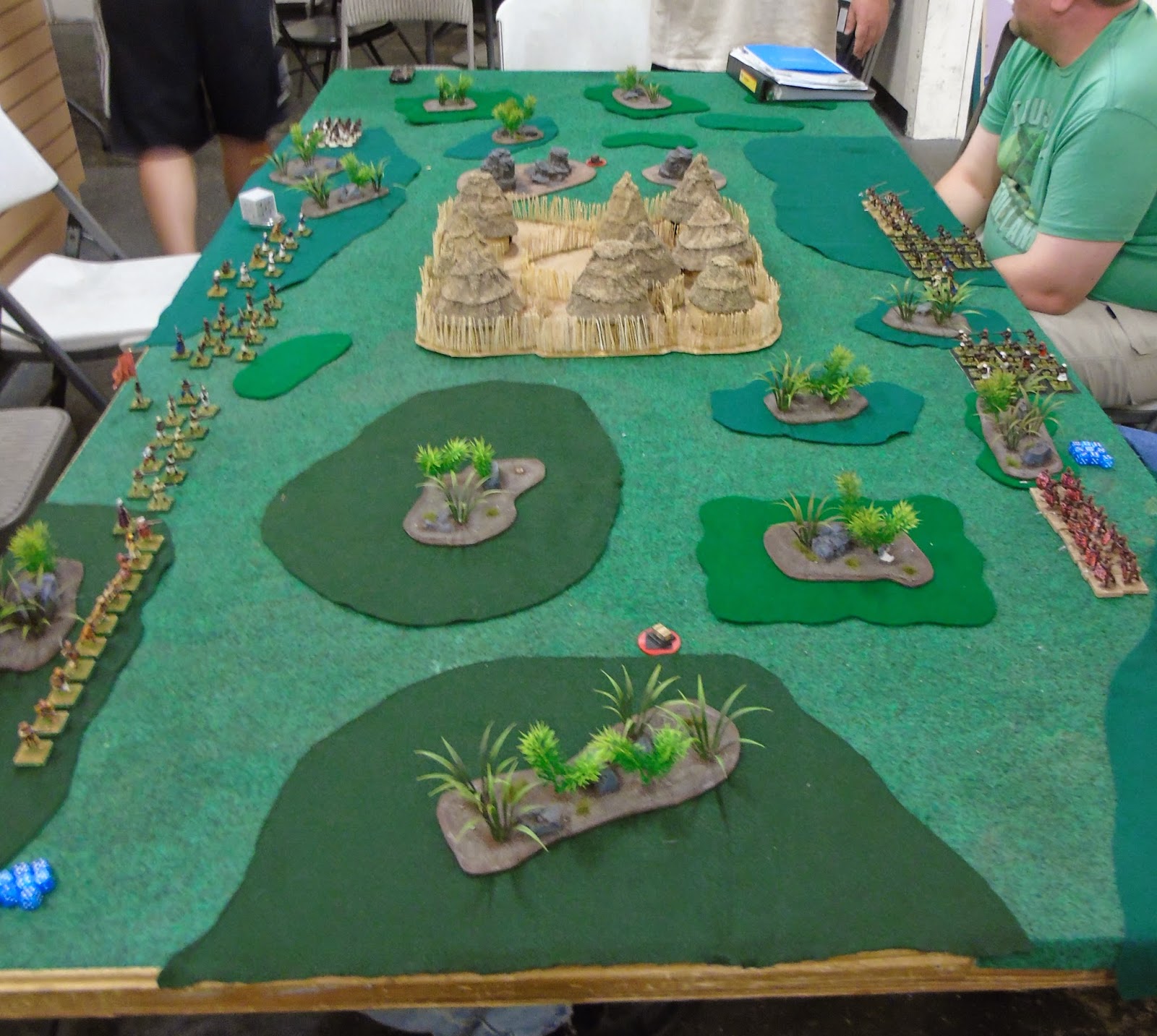 better view of some good guys. 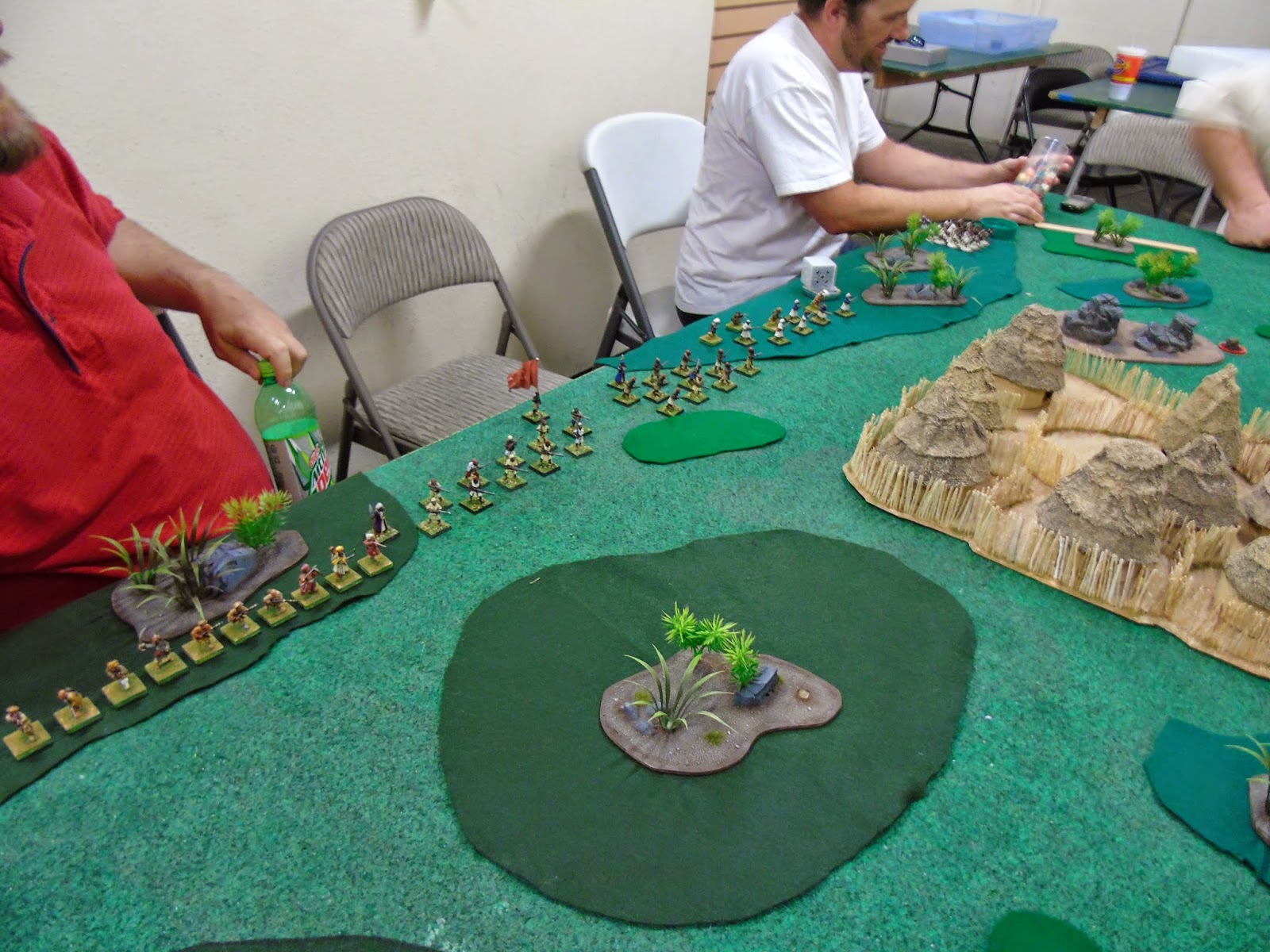 The master game gamemaster and of the evil green shirted European generals, together with his evil troops. 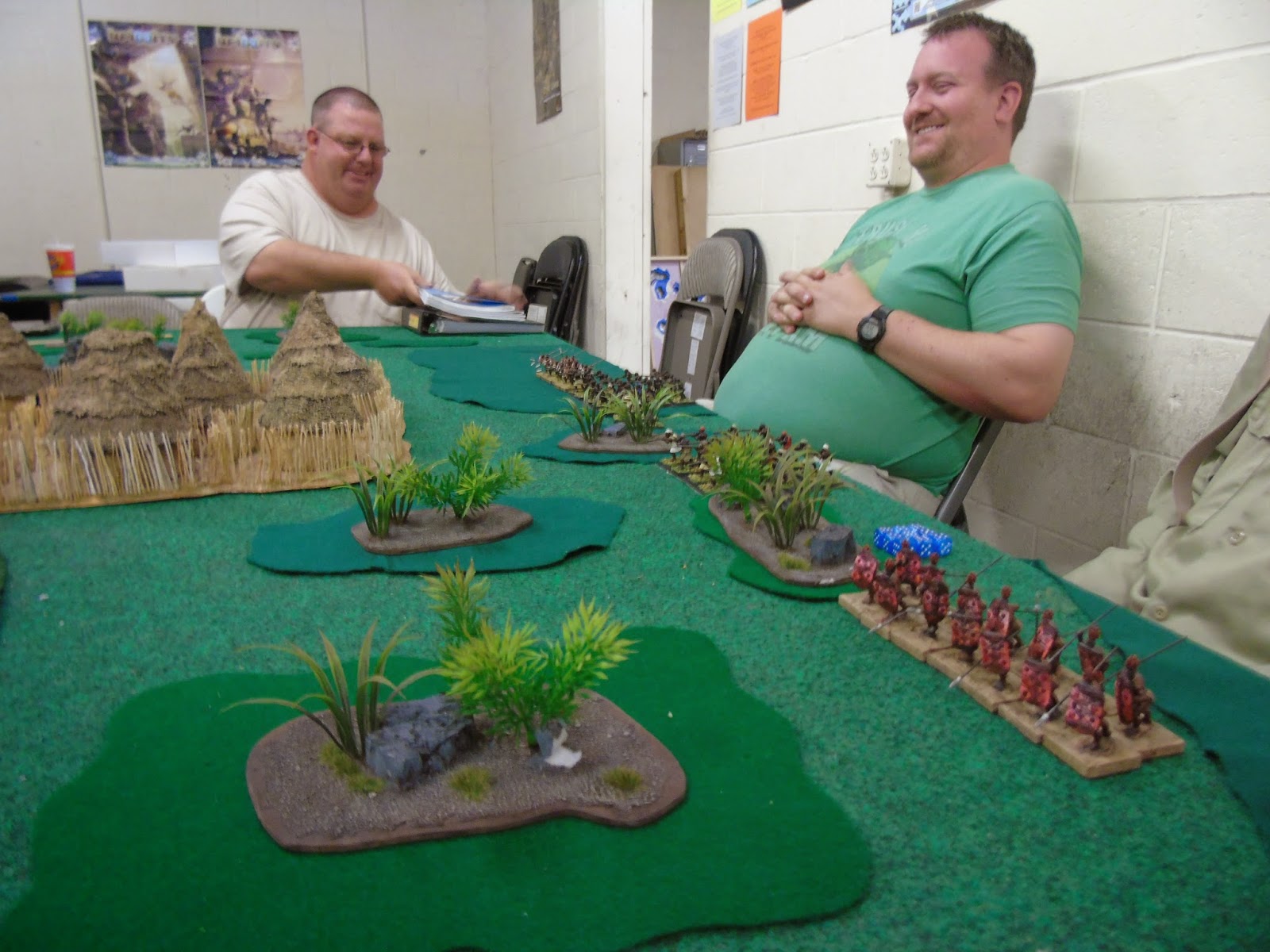 One can see another evil general shaking in fear as the valiant Askari and Arab swordsmen advance to the objective he's already taken in the first or second turn. 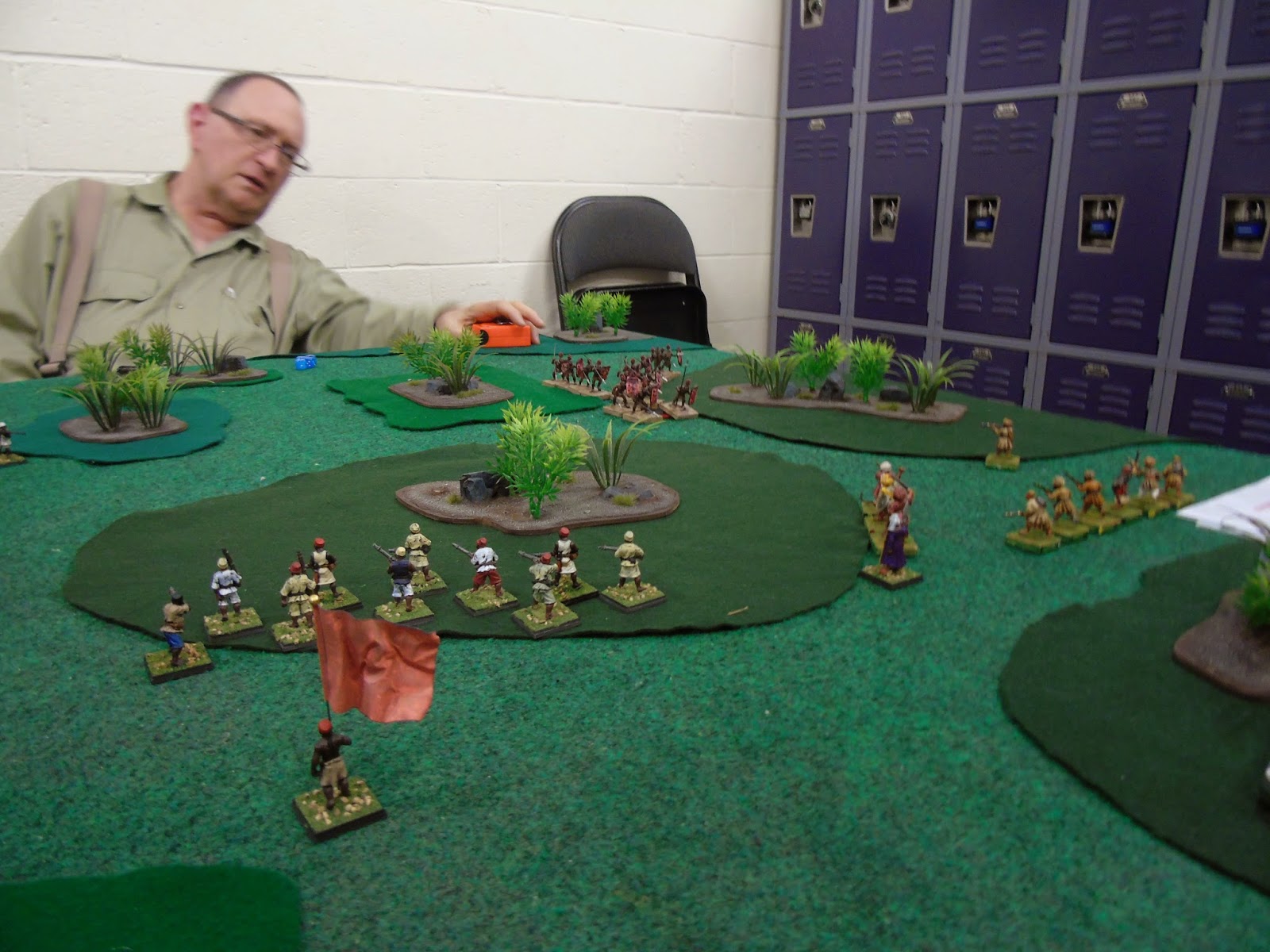 The particularly brave troops I am leading advance towards the village and marvel at my amazing hobby craft. 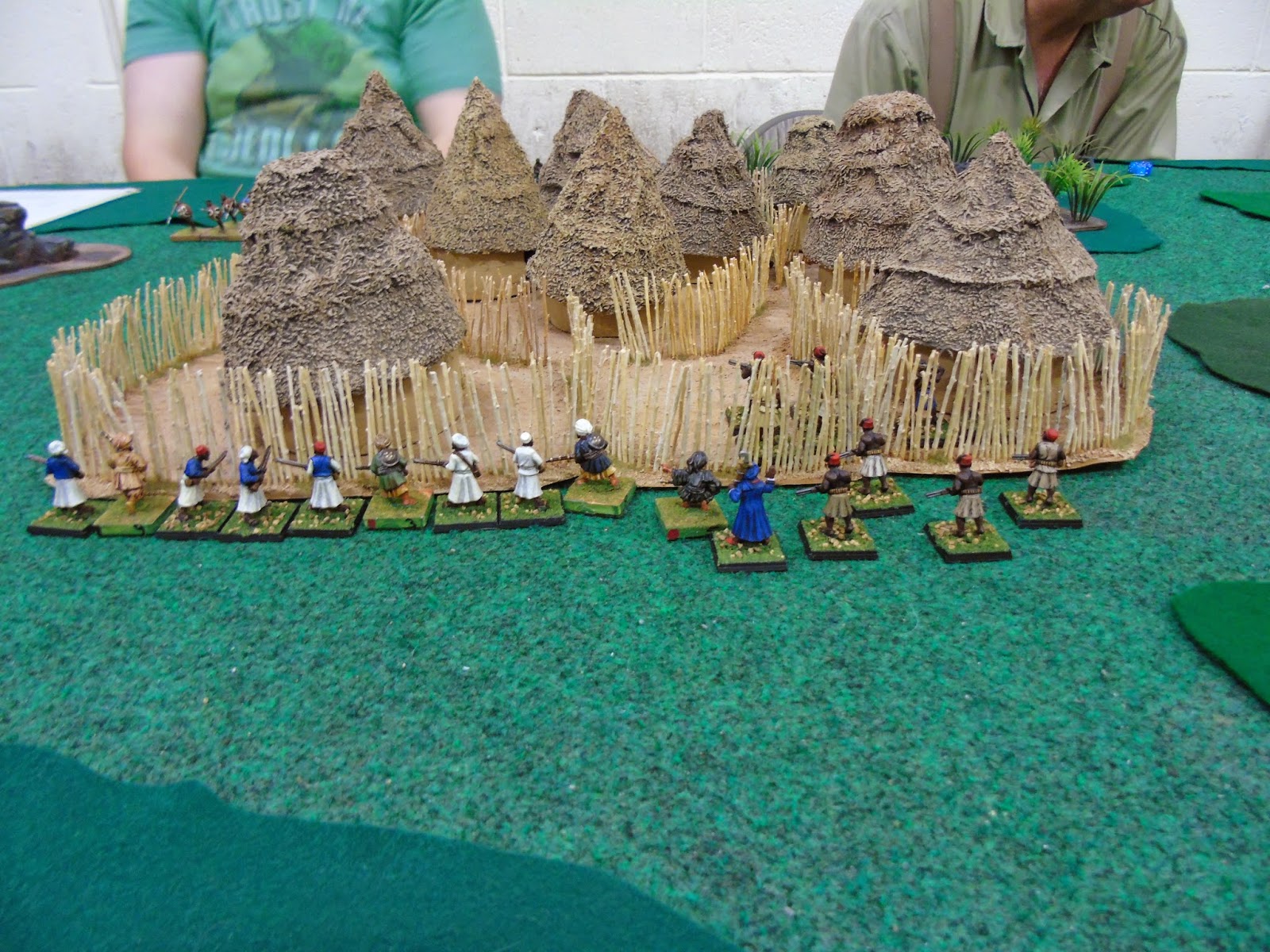 Here the cowardly enemy advances much slower, in great fear of the beautifully crafted village. 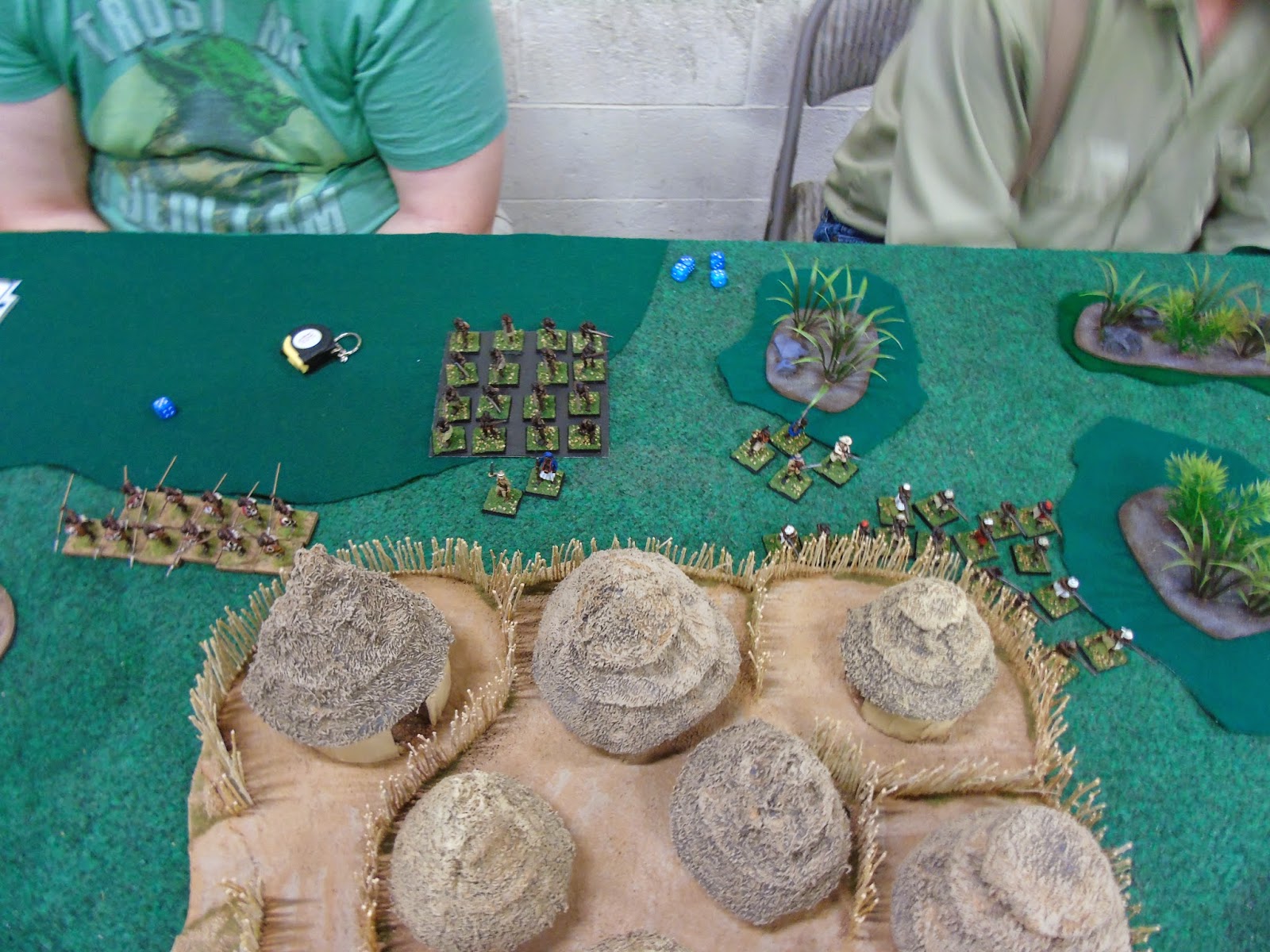 See how well the right wing of righteousness advances and the evil warriors fiddle about. 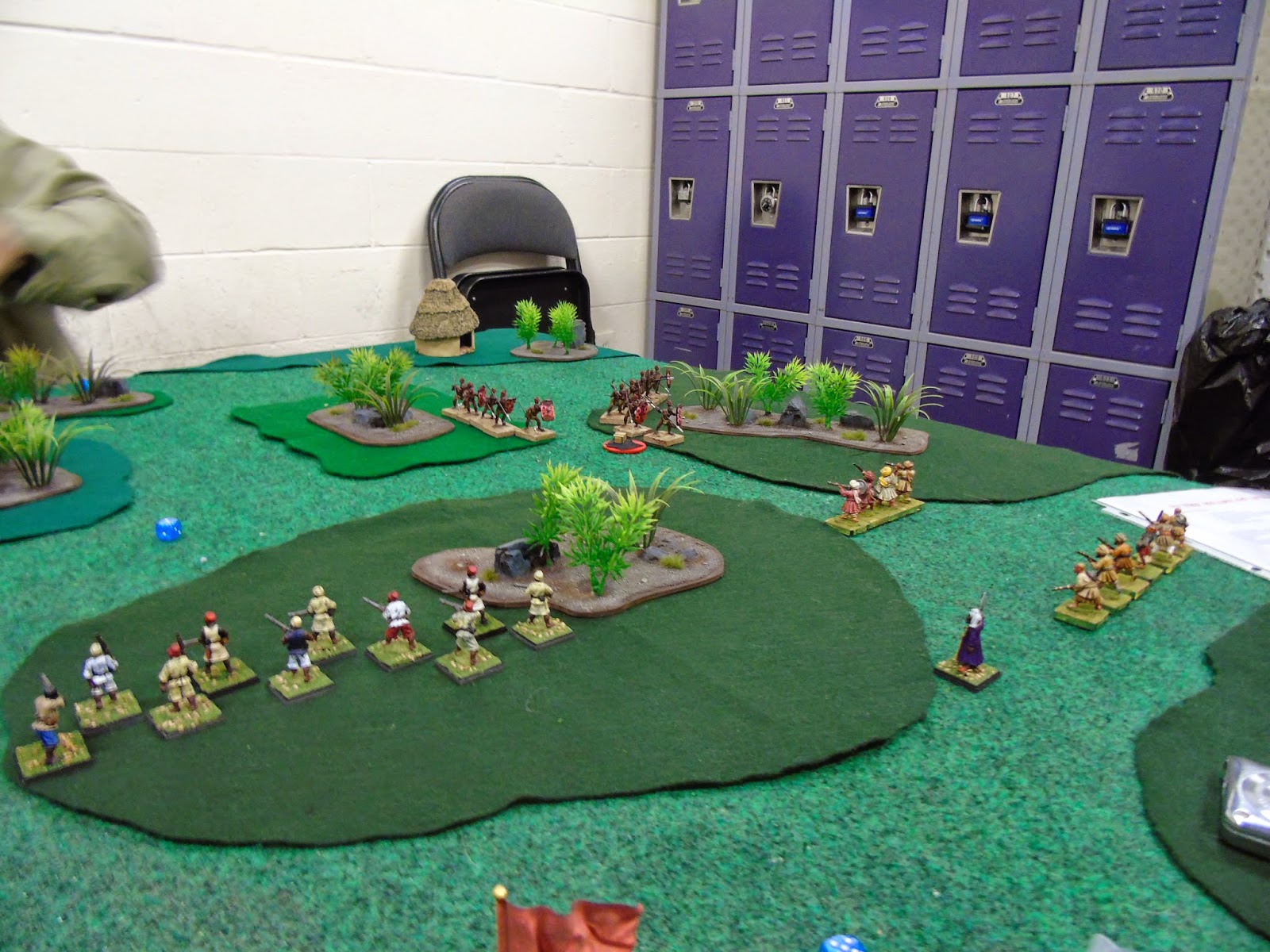 a close up shot of their evil fiddlyness, their general orders them to urinate on the objective. 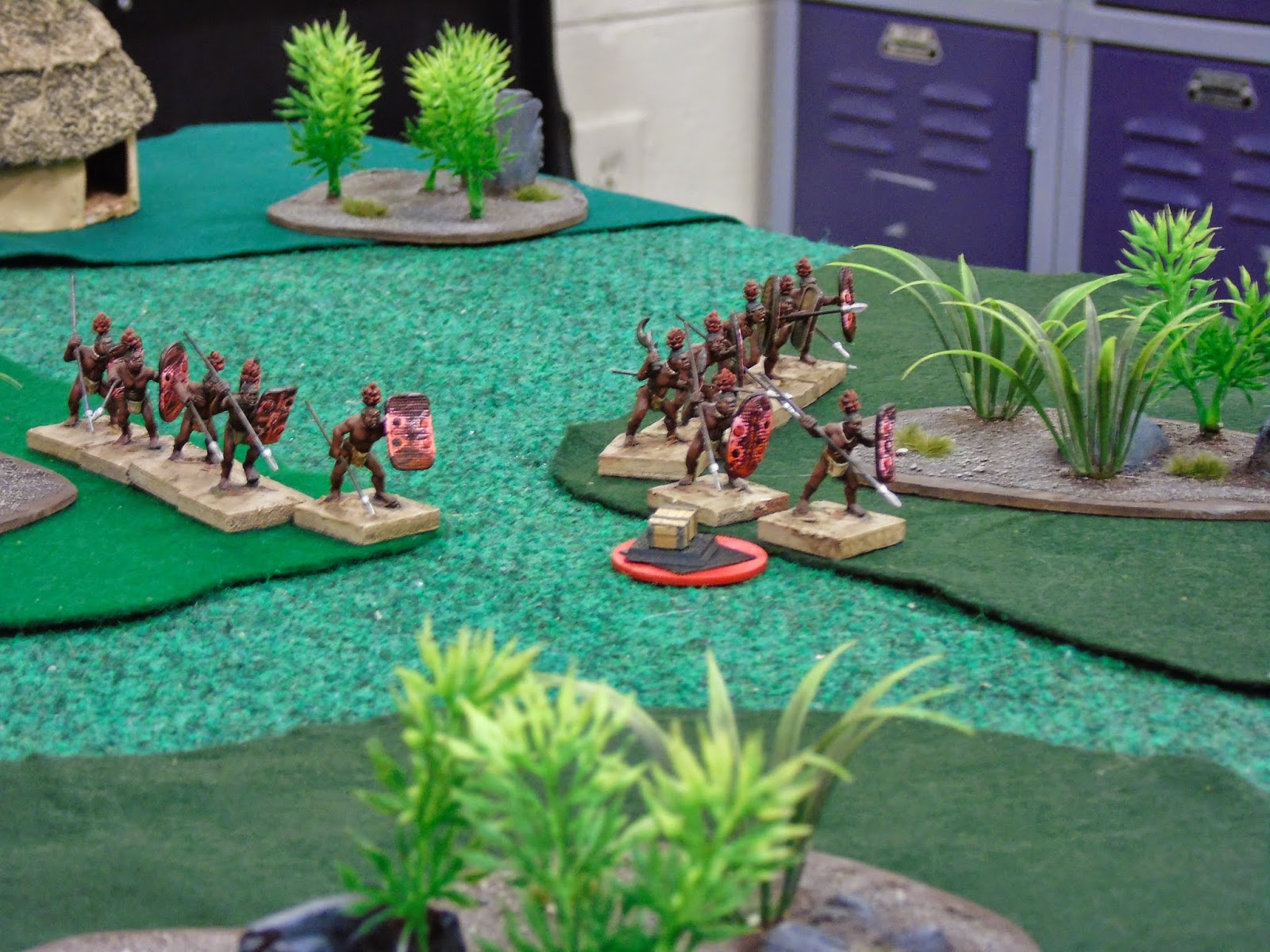 The heroic General Allen has our Godly left wing advance to some rocks and an ill Fate causes  them to sit there long enough to almost finish the paint job.  They're actually great, the shields are my favorite.  I didn't take any pictures because they are my favorites, and not yours. We advance confidently and righteously into the village.  Some of my troops hop inner walls without penalty because I don't always listen well and missed a rule for several turns. 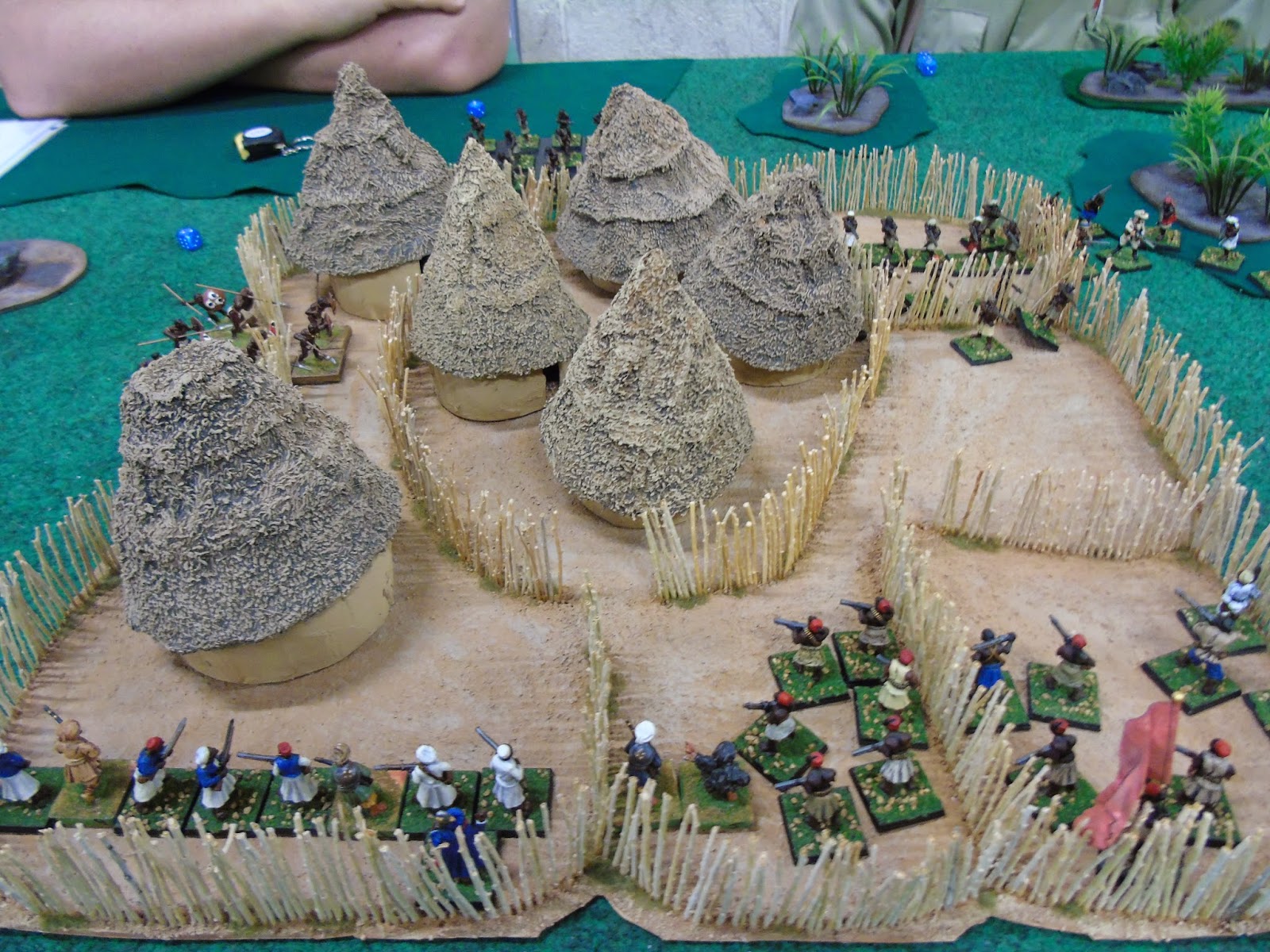 Part of our right wing, led by the Great Steve changes their mind and plans to join me in the village.  They mostly stand around alot, because my Satan cursed hands touched their movement dice. 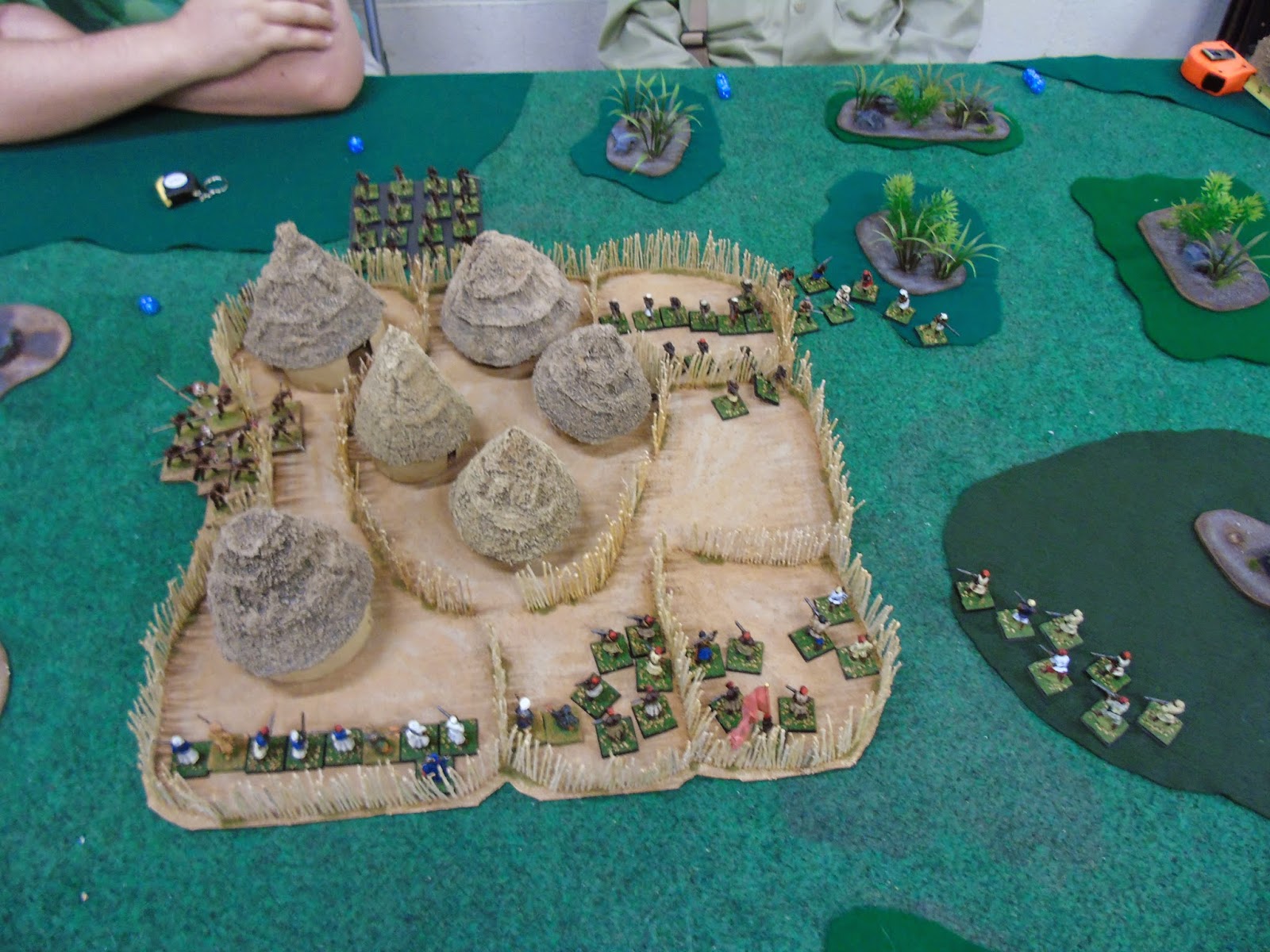 Our right wing Arabs line up and the evil fiddlers fiddle. 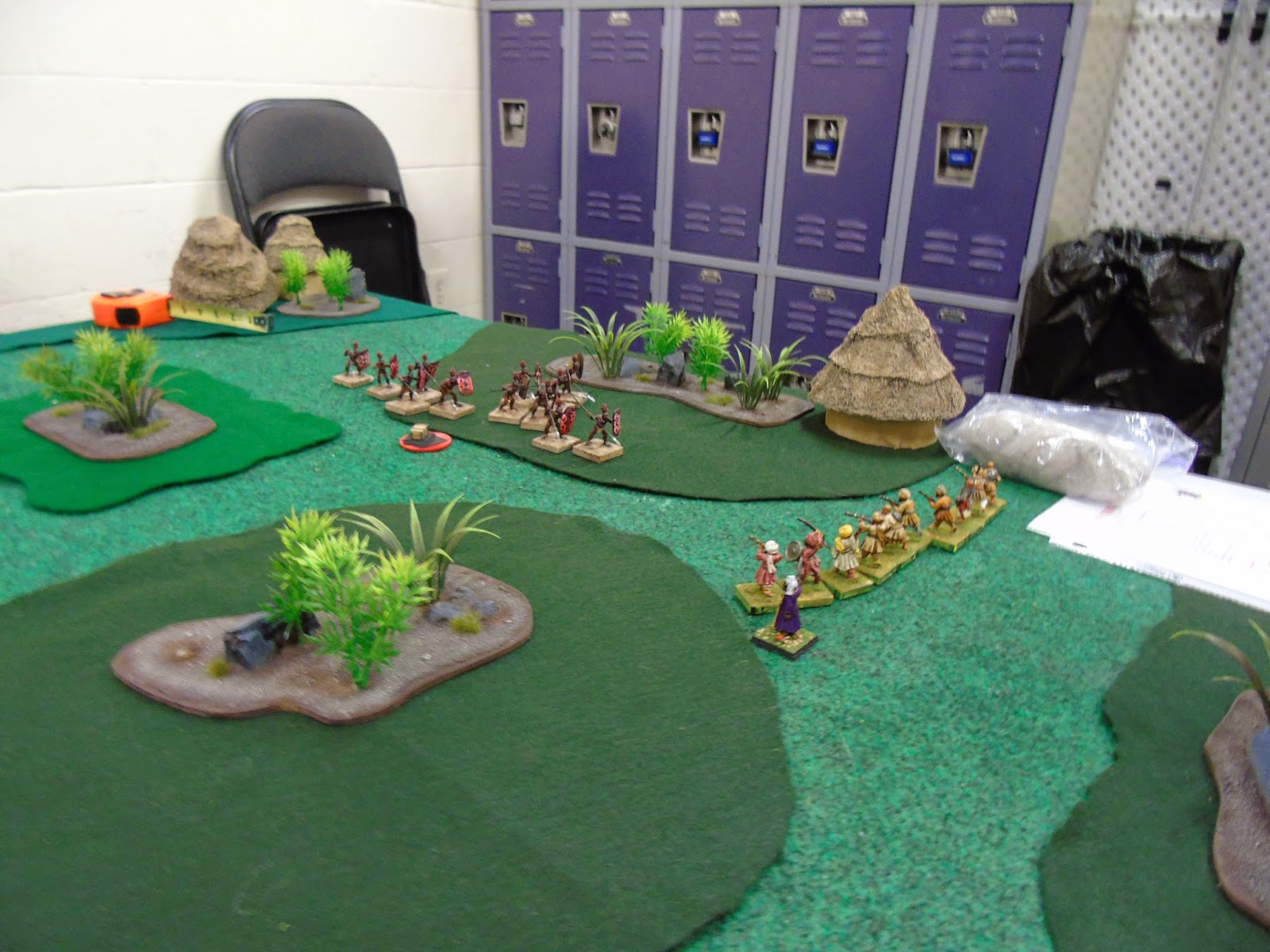 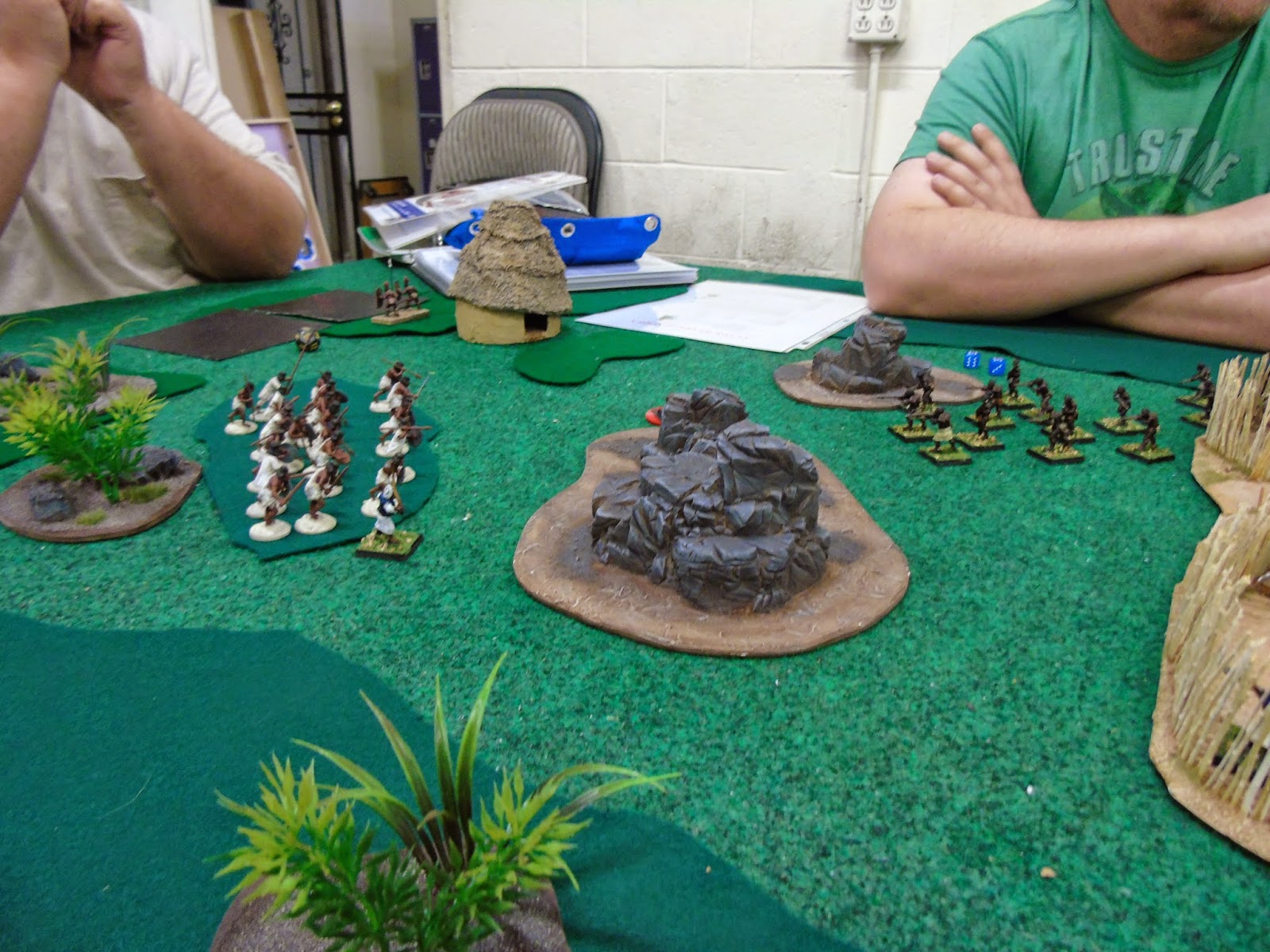 Oh dear, this is when I sharted.  The enemy swarms into the village and one thing I don't like is a fair fight. 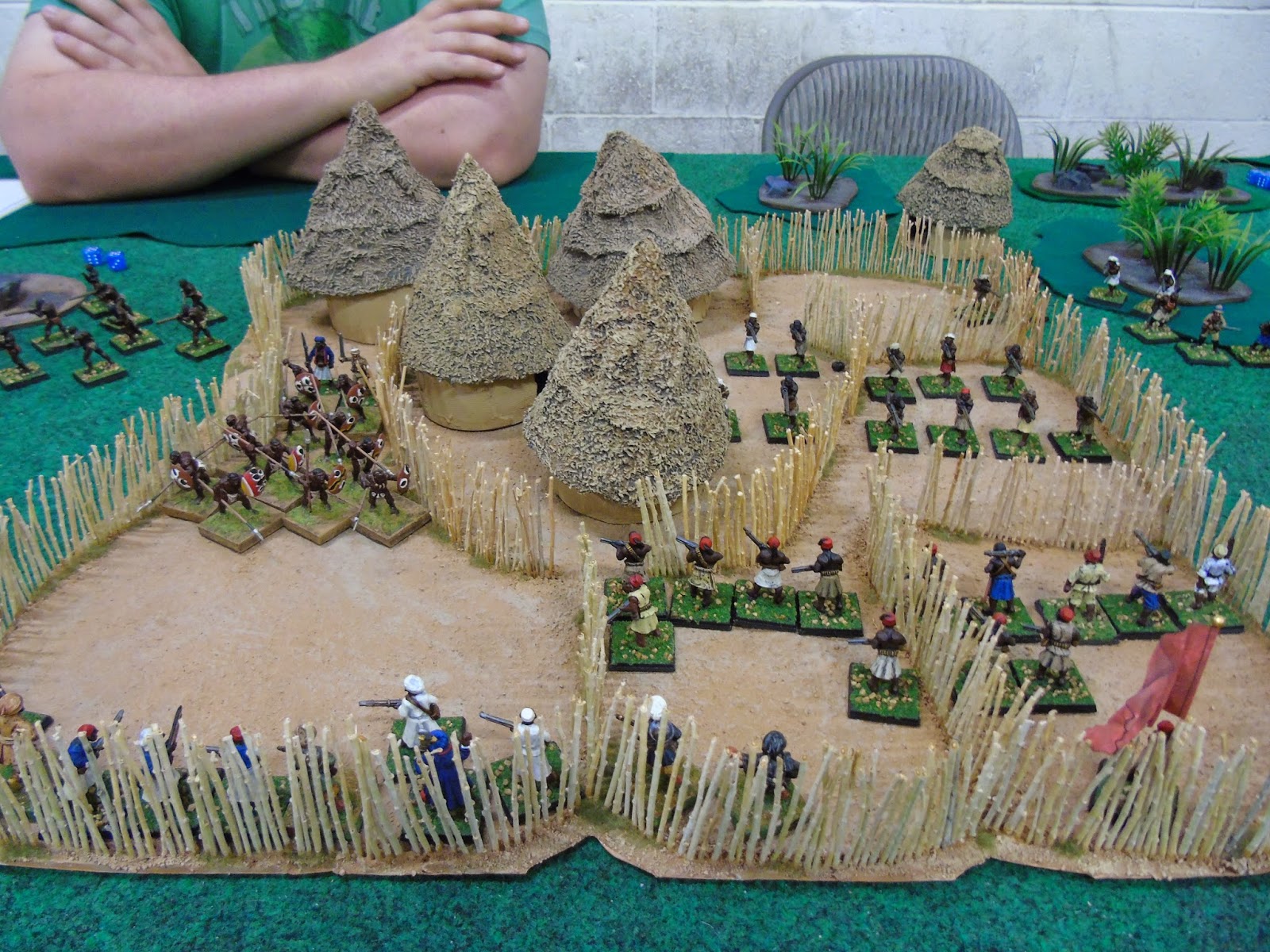 Our goodly left wing awakes from their nap and charges a wall of muskets. 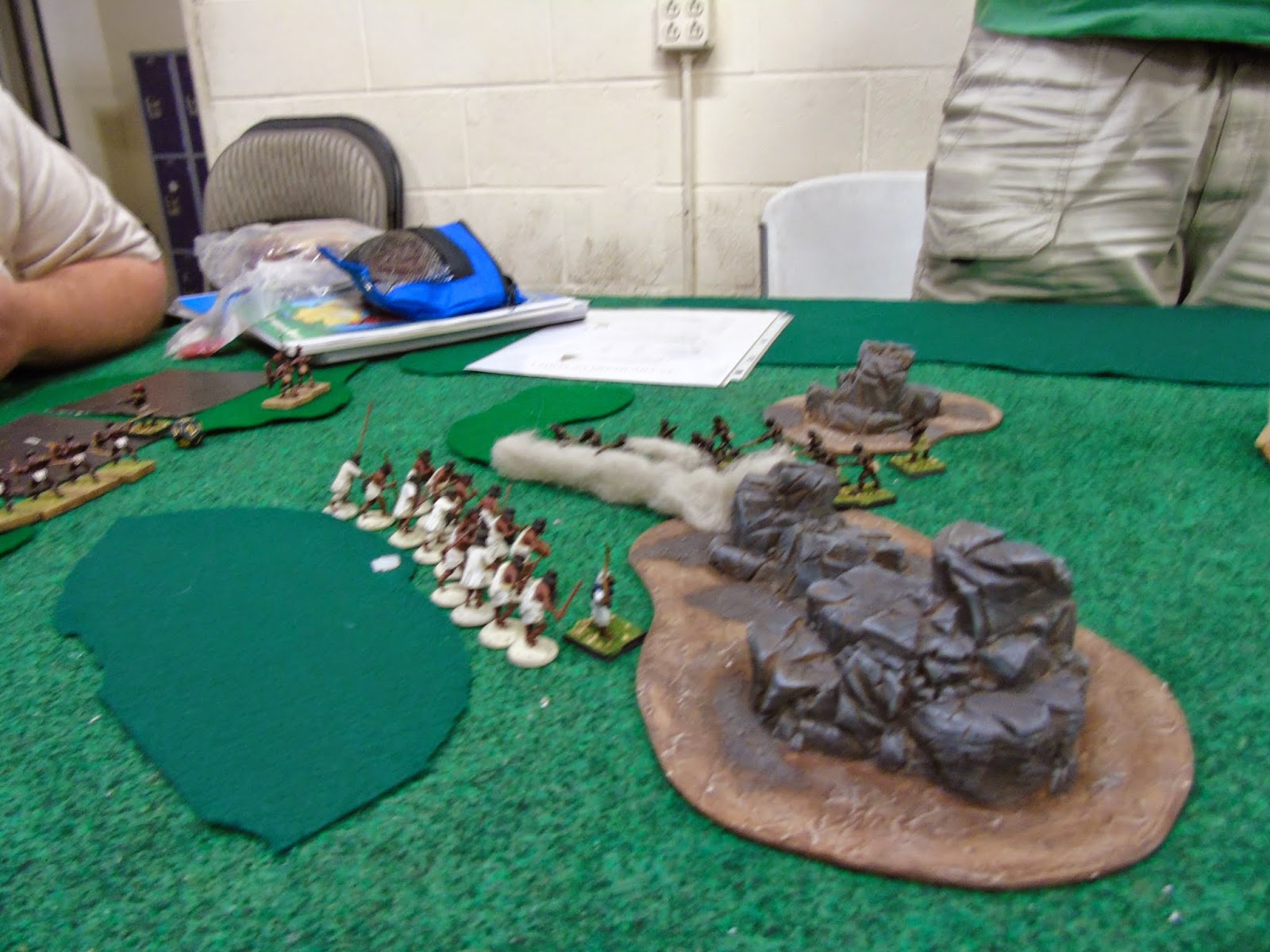 Everyone on the right wing has moved around.  Several European sharpshooters have arrived to keep our Arab brothers from advancing towards the urine soaked objective. 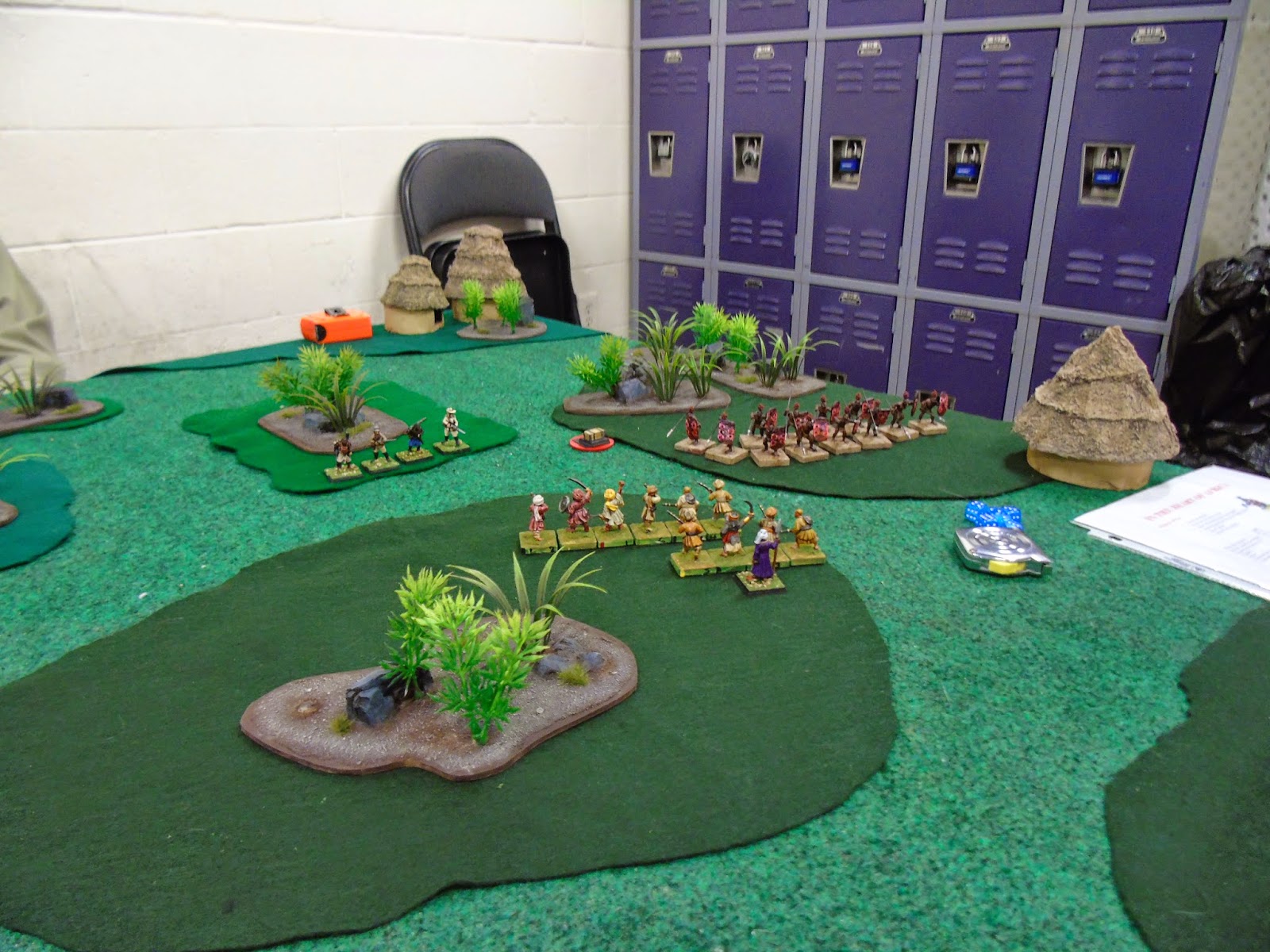 The horde of spearmen charged my Arabs to be mowed down with short range musket fire.  They did make contact and killed a few of my martyrs. 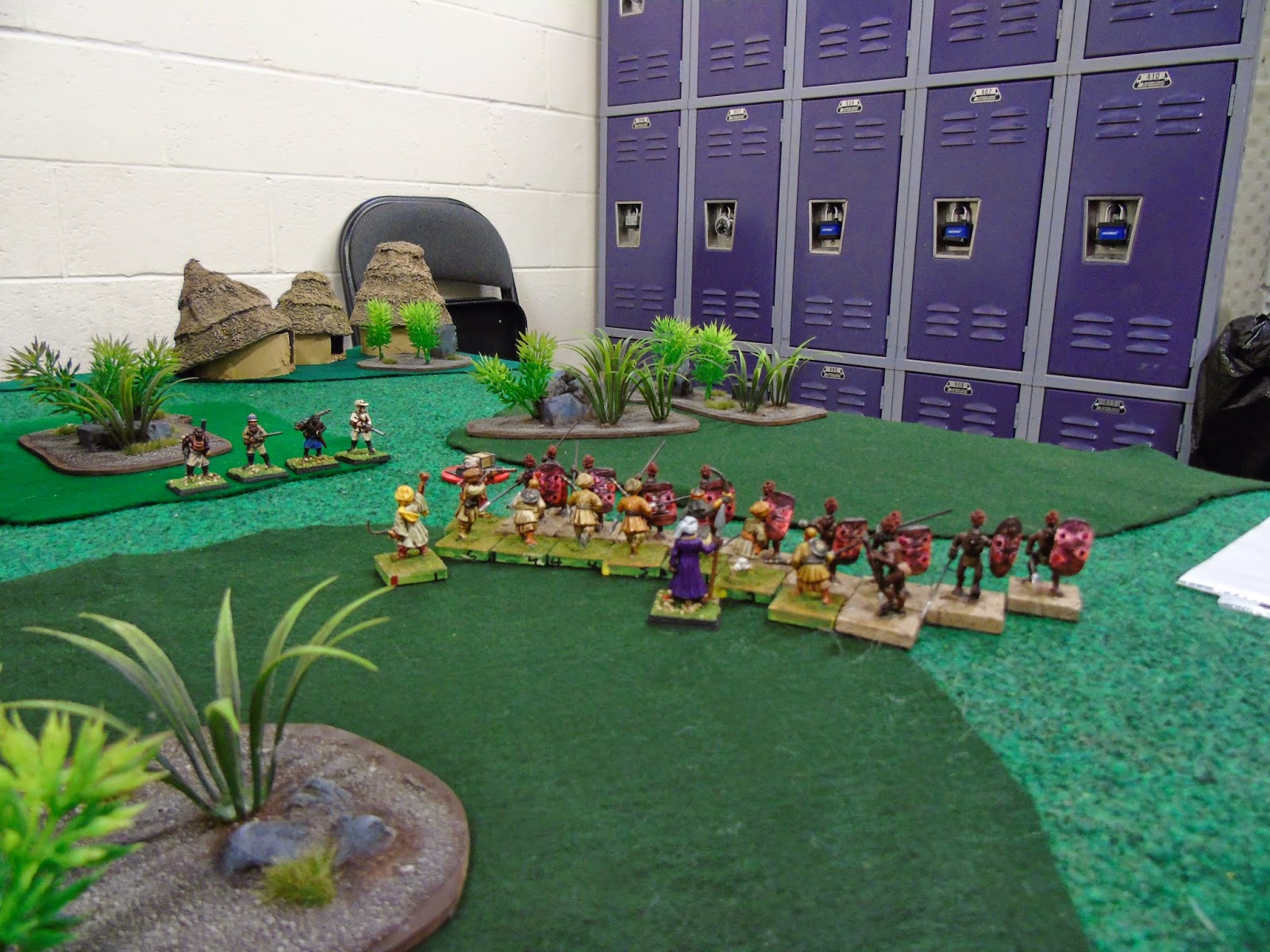 Please notice the lack of evil warriors in the village.  God ordered me to slaughter them and then surround the enemy commander.   The enemy Askari can't get in range to take good shots at my Askari avoiding contact in my side of the village. 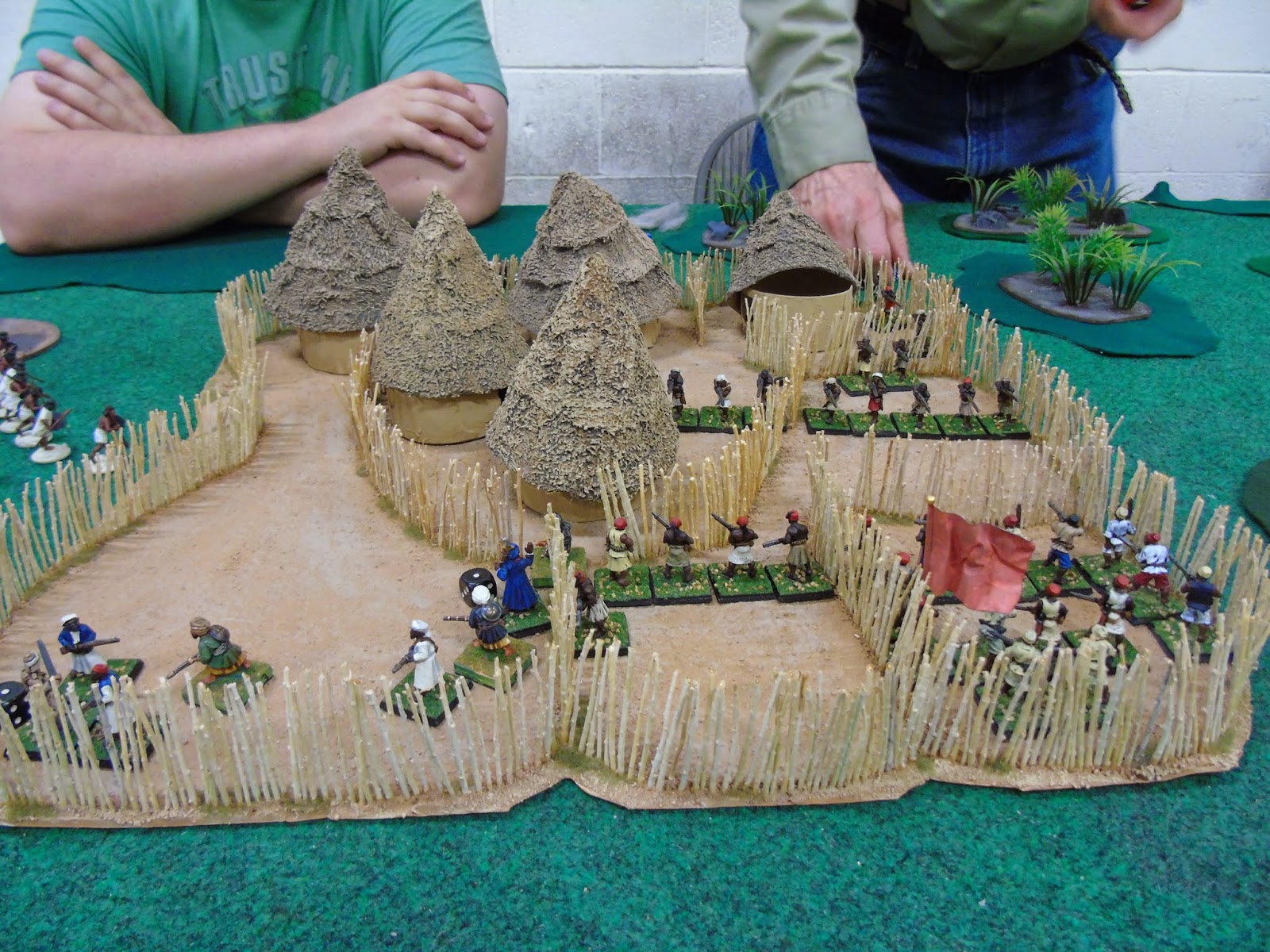 The valiant heroic left has annihilated the enemy. 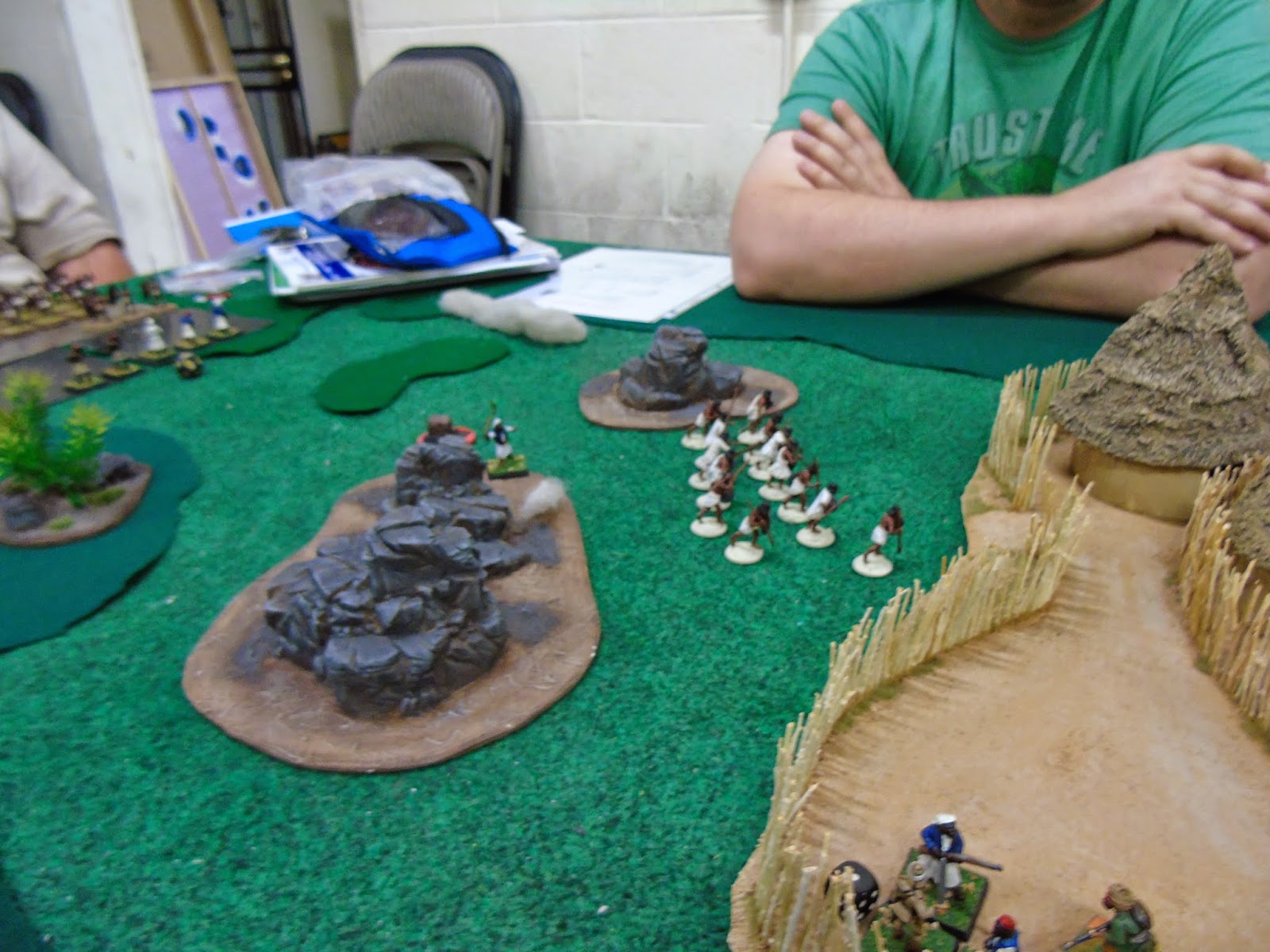 With numerical superiority and my extreme handsomeness we own the village. 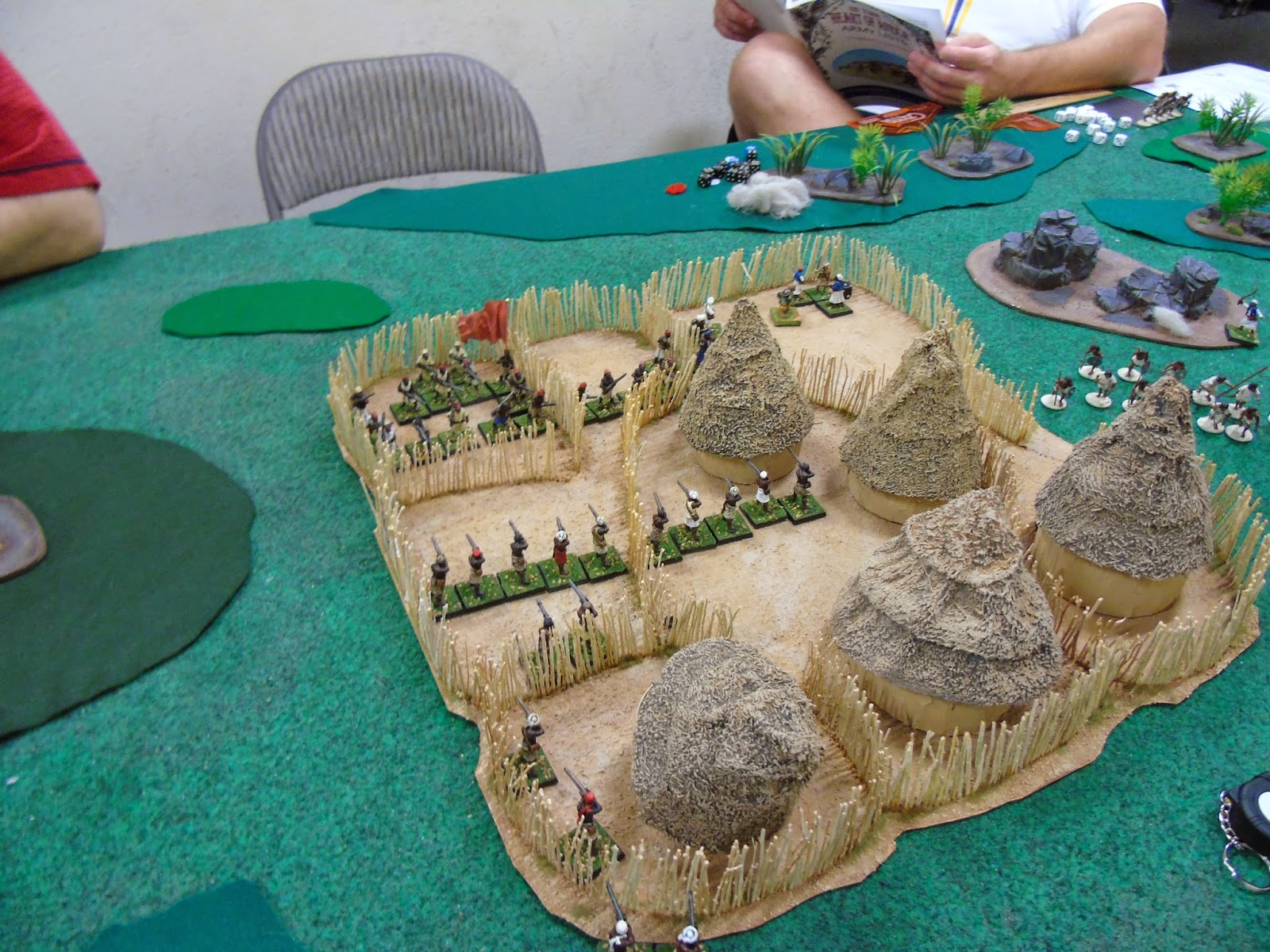 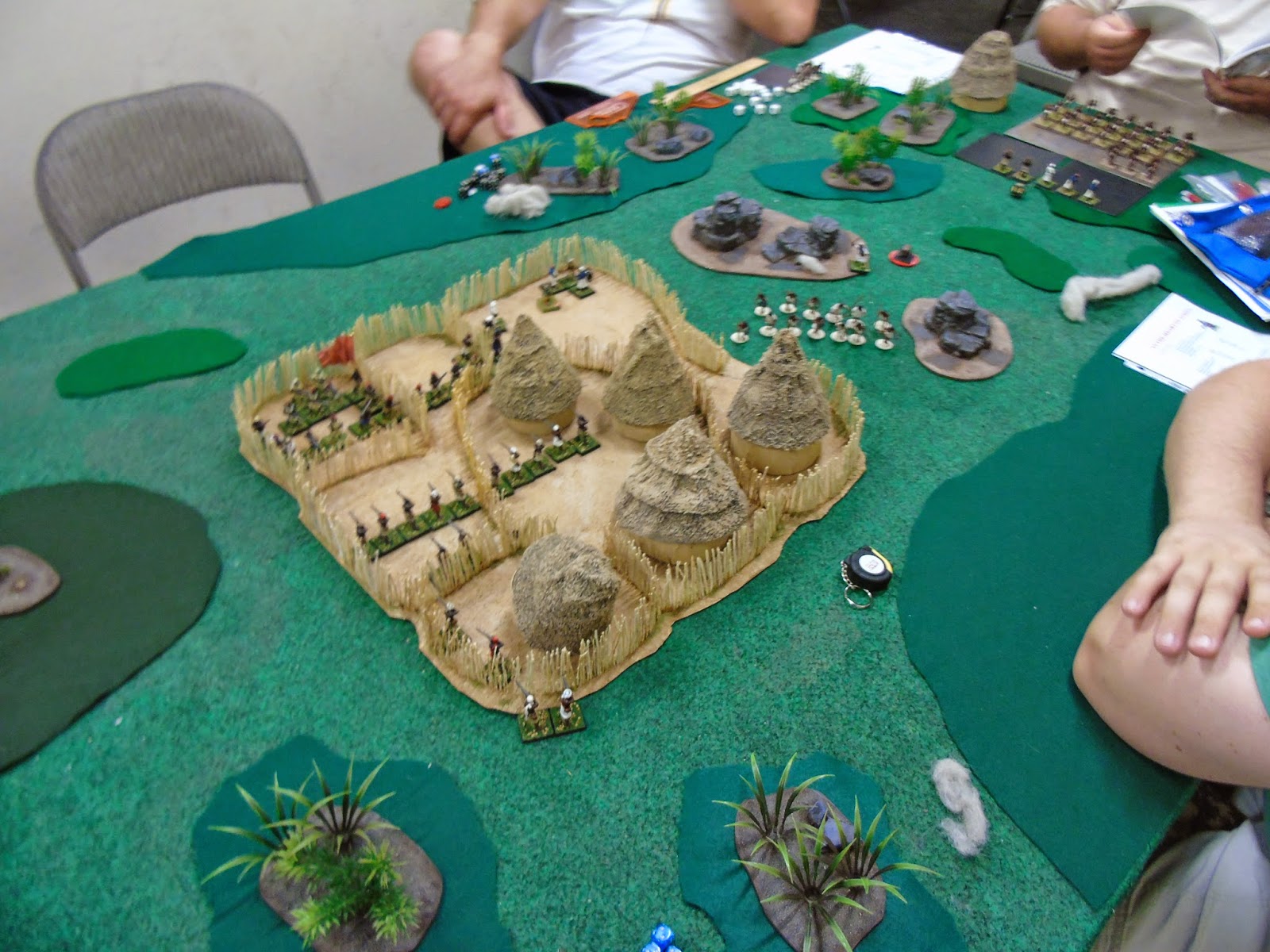 The right wing will probably lose the melee, but we still own the field with 15 victory points to 5, when  the villains call it a day. 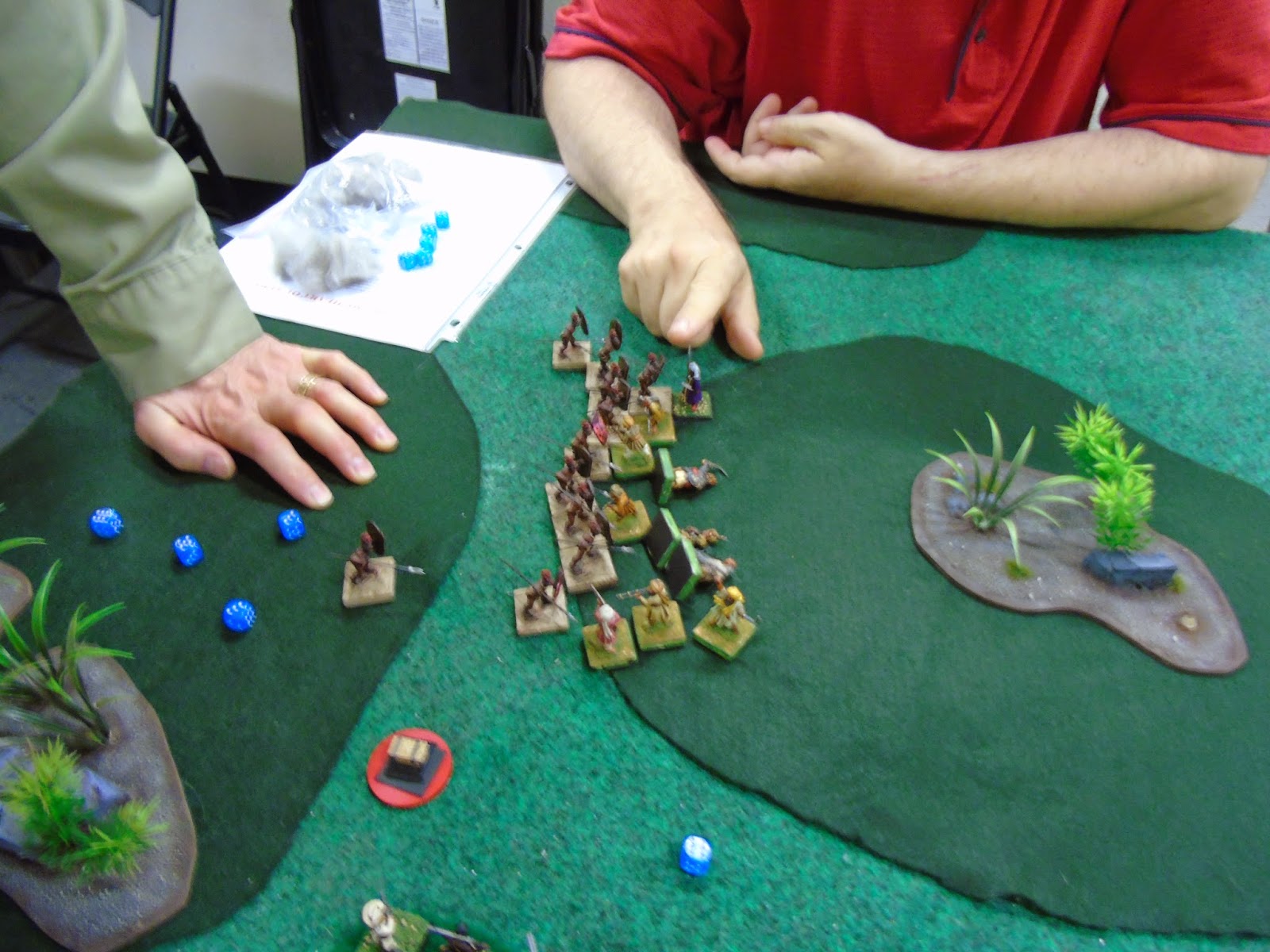 A random picture, with the top falling off of a hut, this strongly irritates our gallant gamemaster. 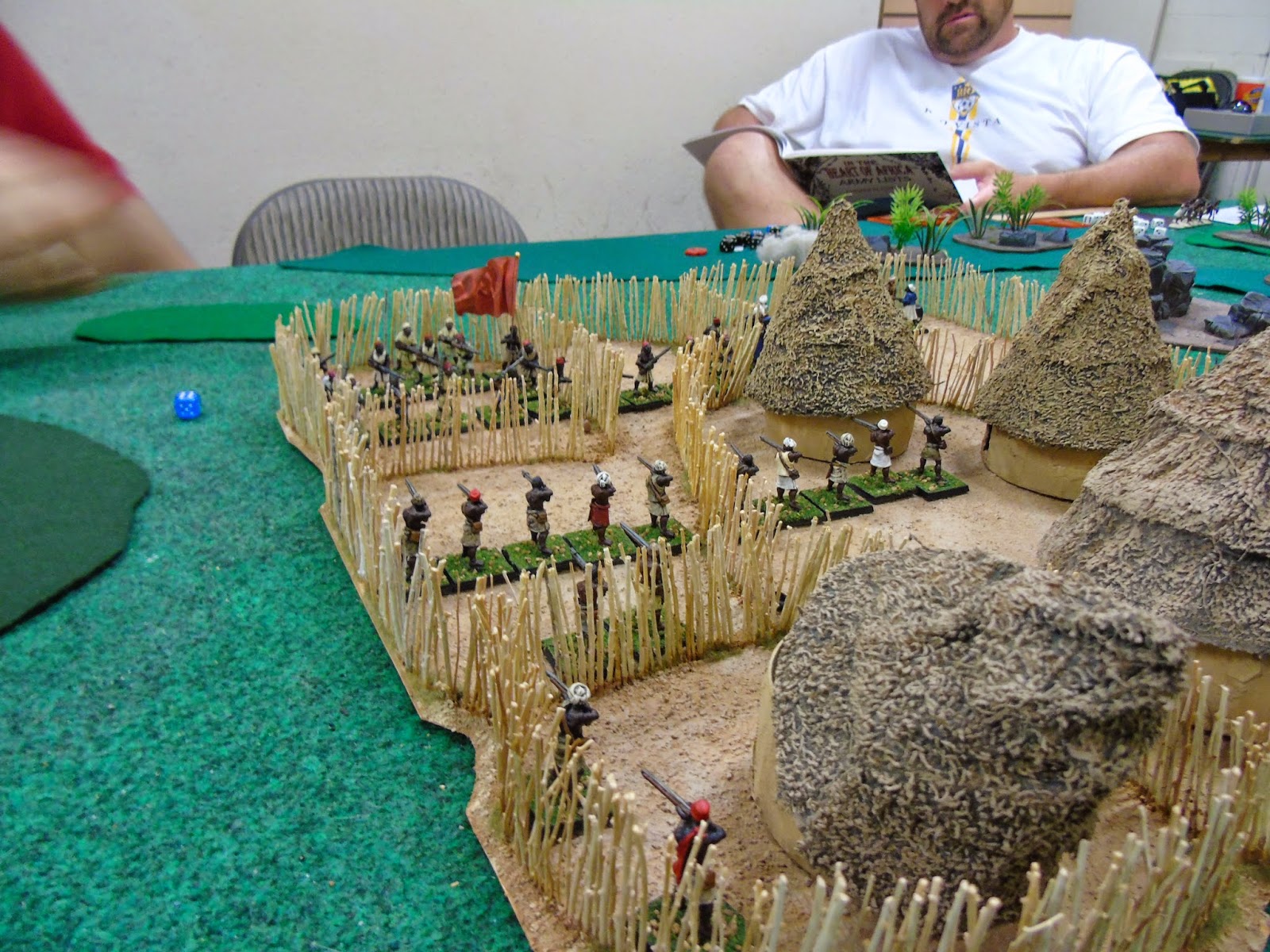 Till next time when I really promise to have more minis painted.