Battle for Jepson's Landing - In the Heart of Africa Adventure Time

I've been too lazy to post game reports recently, but I thought I should post a recent game of "In the Heart of Africa game.


Rumor has it, that the rogue colonialist ad-venture capitalist J. Jepson has acquired a boat load of repeating rifles.

The evil British colonialists and good Arab slavers both want the weapons.  There are two objectives, the storage area in the middle and Jepson himself in the landing bar. 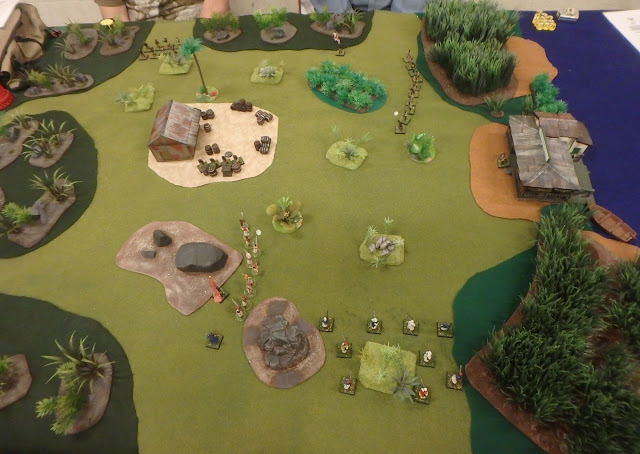 One British unit boldly advances so close to Jepson's landing, he comes outside. 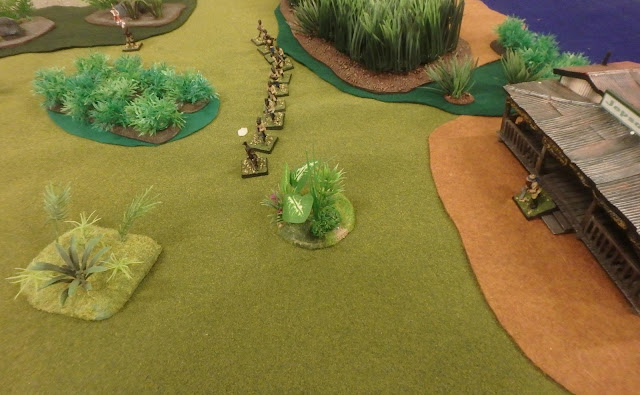 And Jepson kills a soldier. 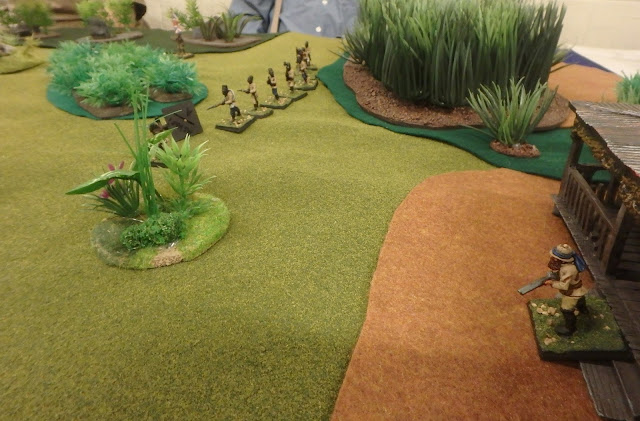 The equally bold Arab unit triggers an ambush from the storage area. 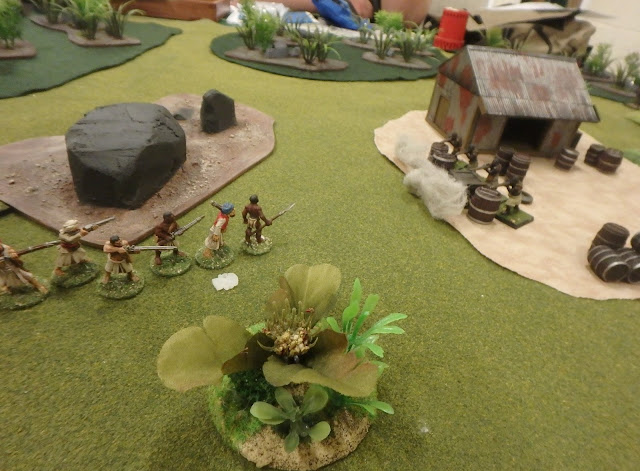 Spearmen reinforcing the Arabs, have arrived via boats to sneak up and attempt to capture Jepson. 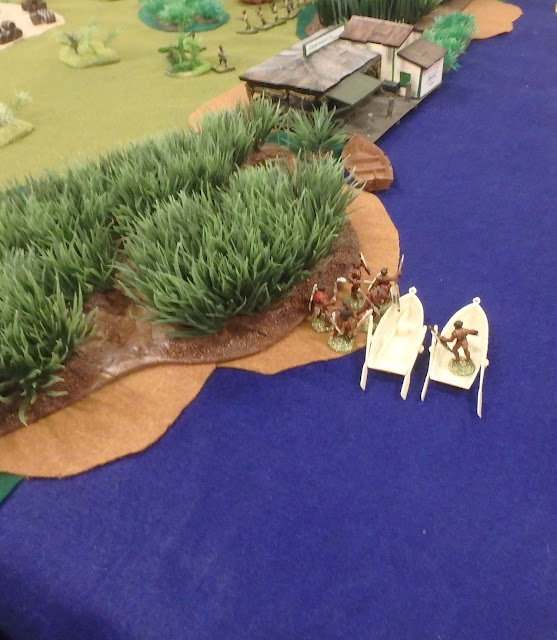 Another ambush from the storage area targets the British, but luckily for the British a large group of allied spearmen have also arrived to help. 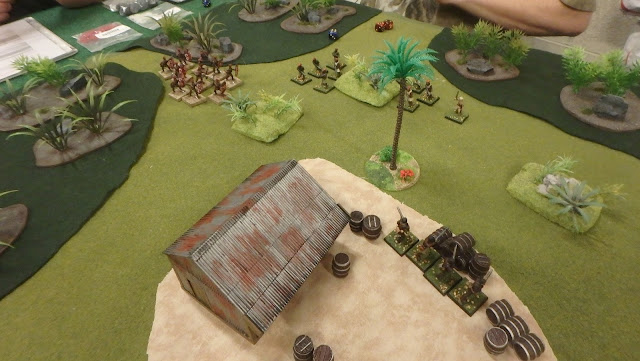 The ambushed Arab unit, moves into rocky ground for a little cover and are pleased to see their bowmen allies arrive. 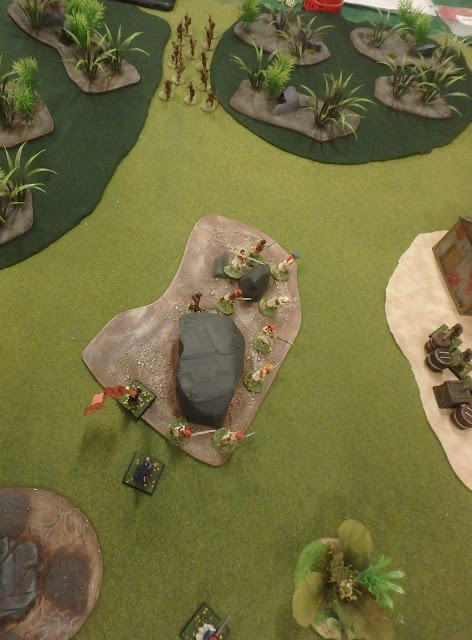 Arab soldiers spread out in a far more cautious move and plan to kill all the colonial soldiers focused on Jepson. 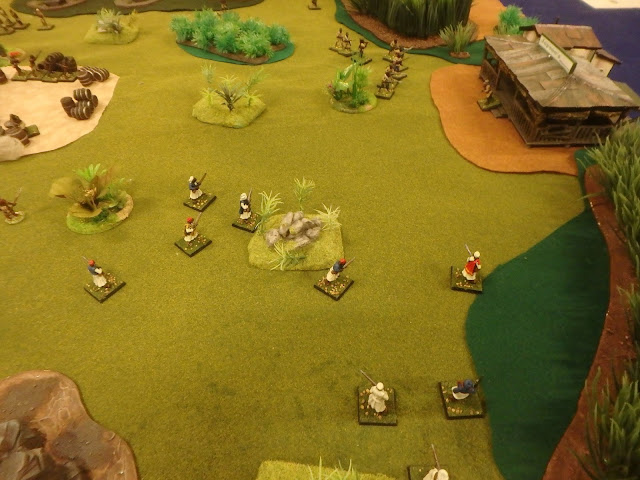 The Arab allied spearmen continue to sneak up on Jepson's rear. 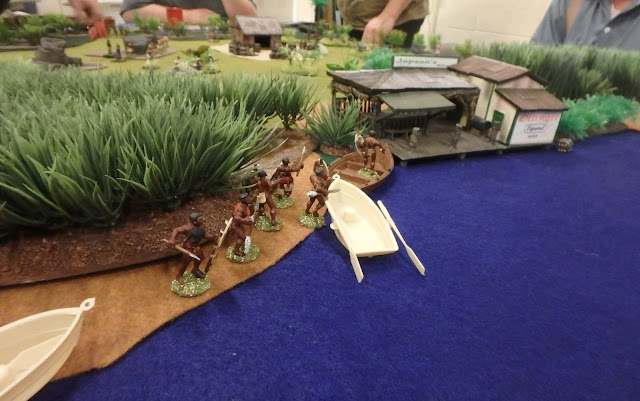 The colonial soldiers are nearly wiped out by the Arab soldiers and Jepson.  British allied bowmen arrive to try and capture Jepson. 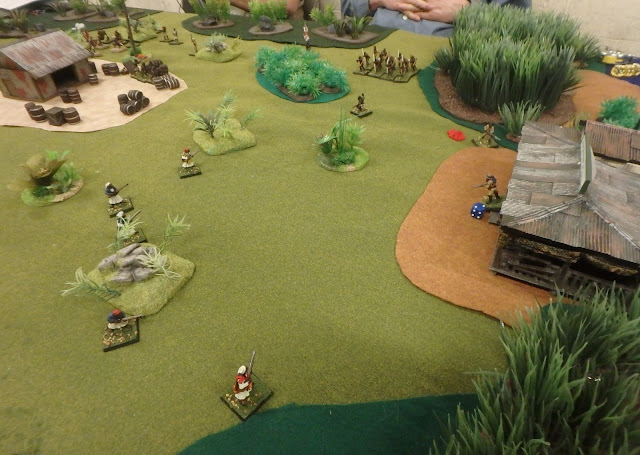 The British forces slowly advance on the storage area. 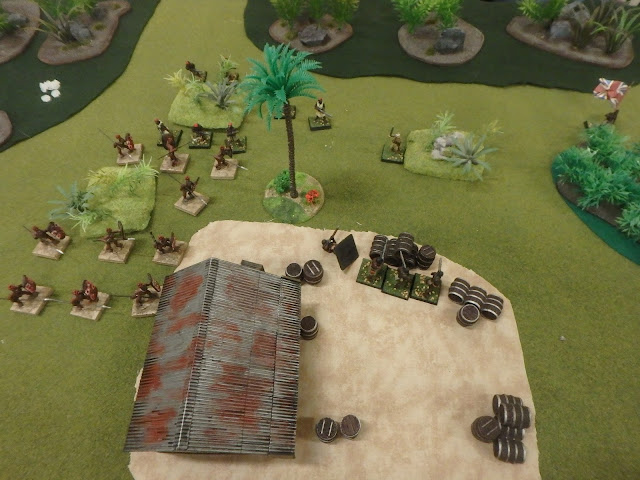 Having killed their ambushes quickly, the Arab forces advance on the storage area as well. 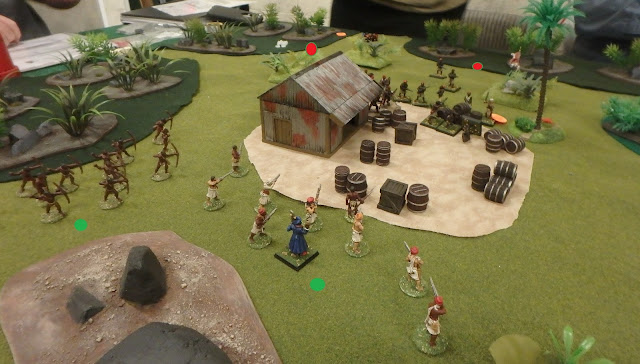 The British leader's bowmen are struggling on whether to focus on the Arabs or Jepson. 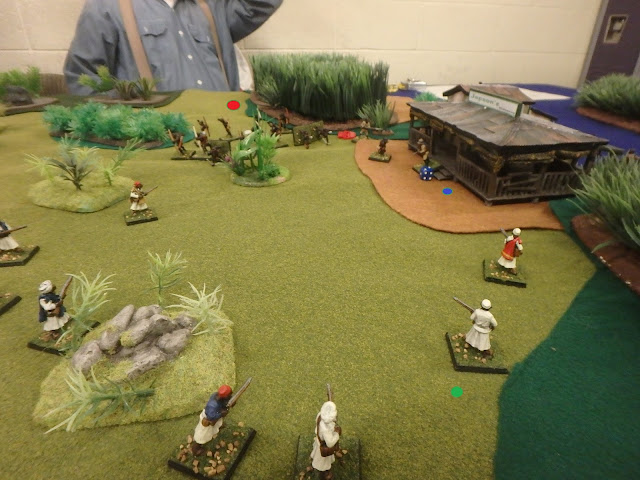 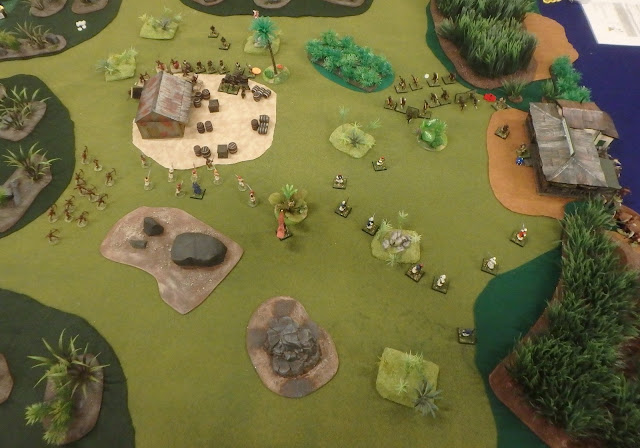 The British scout attacks Jepson in a last ditch effort, as the Arab leader's spearmen charge through the landing.  (He will fail) 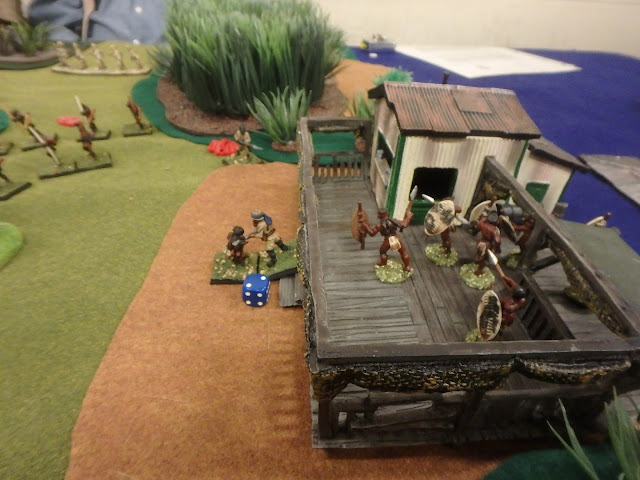 Five units now battle in the swirling chaos that is the storage area. 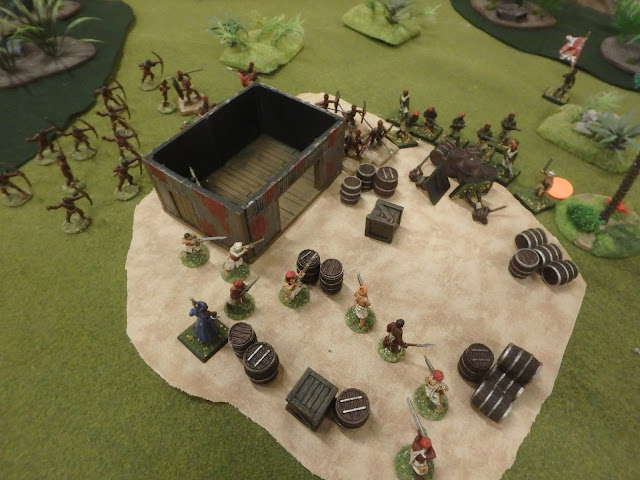 They immediately start to drag him off the board. 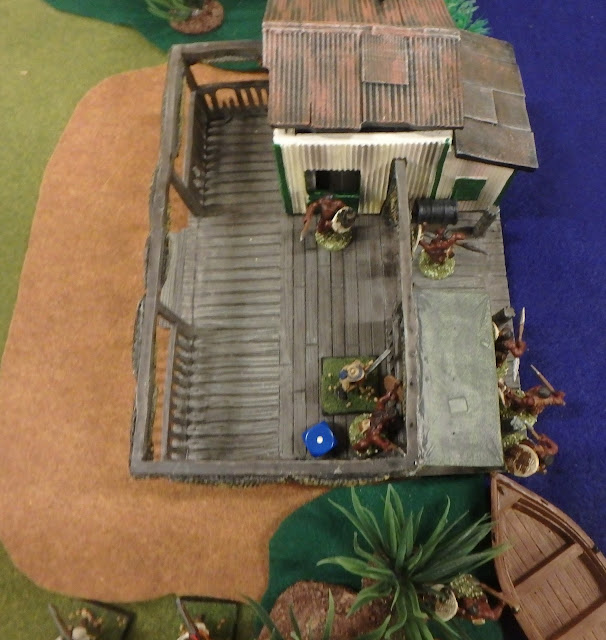 The British leader's spearmen have pushed back the Arab bowmen, Jepson's troops have all been killed, and the Arab soldiers have almost taken the storage area. 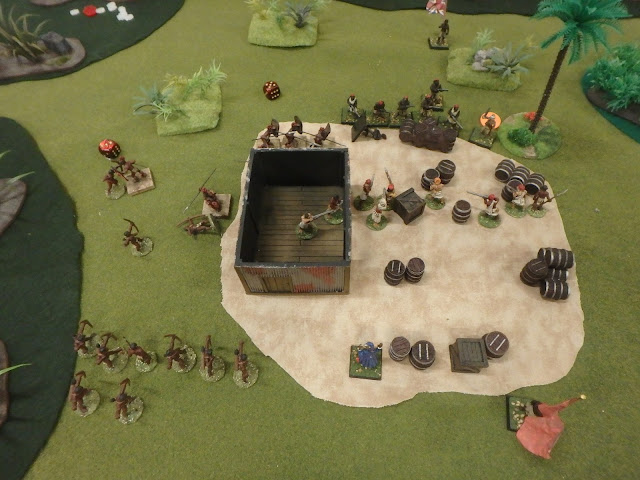 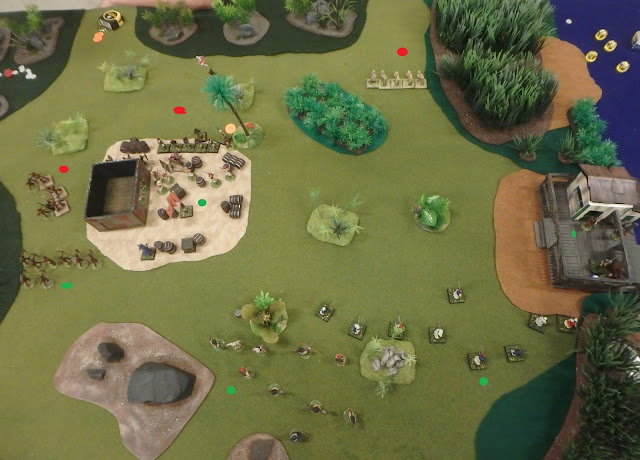 The fresh Arab swordsmen rush behind the rifle screen to help the falling back bowmen, in the storage area melee.  The Arab bowmen have been extremely clever avoiding the full force of the British spears, and slowly withering down the far superior troops. 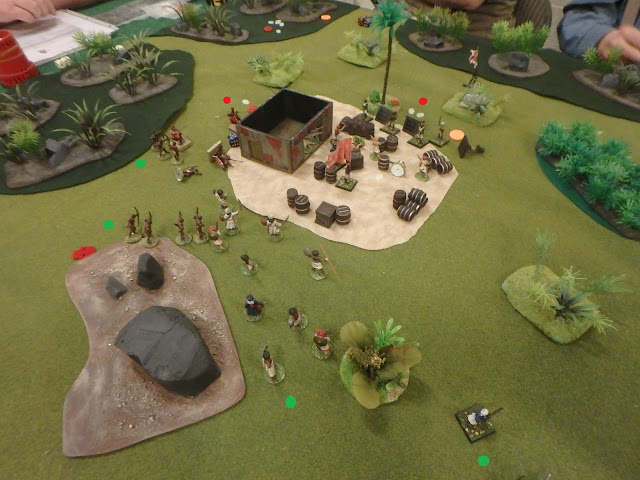 The British soldiers have arrived too little and too late and take casualties from the Arab firing line. 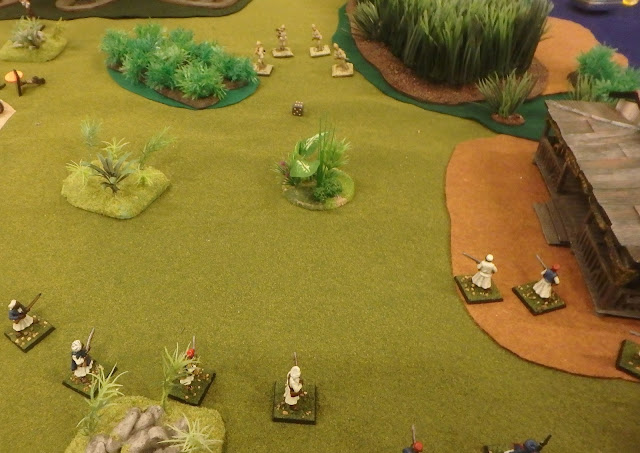 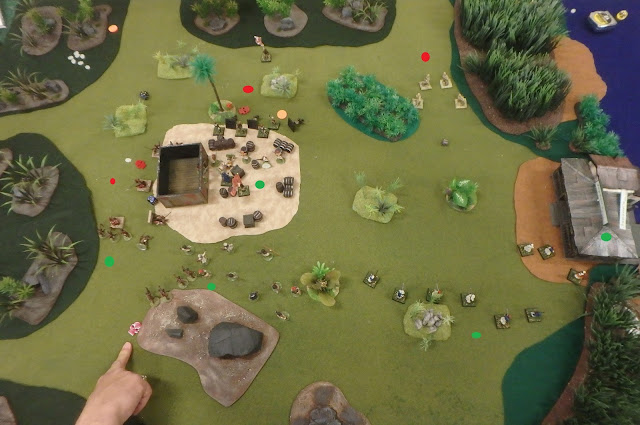 I'll post some mini pics in a day or two.